Dapple Dachshunds are simply Dachshunds with a coat pattern known as Dapple. The Dapple pattern is a specific coat pattern wherein the base fur has a darker shade like black, chocolate or tan with lighter spots spread unevenly on top.

Every Dachshund’s Dapple is unique. Some may have numerous spots and some may just show one, some have a solid color to their face and some may show the dotted coloration of the face, but each one is special and beautiful in its way.

Dachshunds including the Dapple Dachshunds were once hunting companions but with changing times they have settled into the role of just companion animals although they still have amazing watchdog traits.

These little cuties love jumping around and playing but wouldn’t shy away or miss the opportunity of a cuddle. They have all the similar qualities to that of a regular Dachshund. They are easy to care for and maintain but a bit difficult to train.

FACT: Dachshunds with a Dapple pattern to their coat are considered rare as the occurrence of this unique and beautiful pattern in a Dachshund is a result of a genetic mutation. 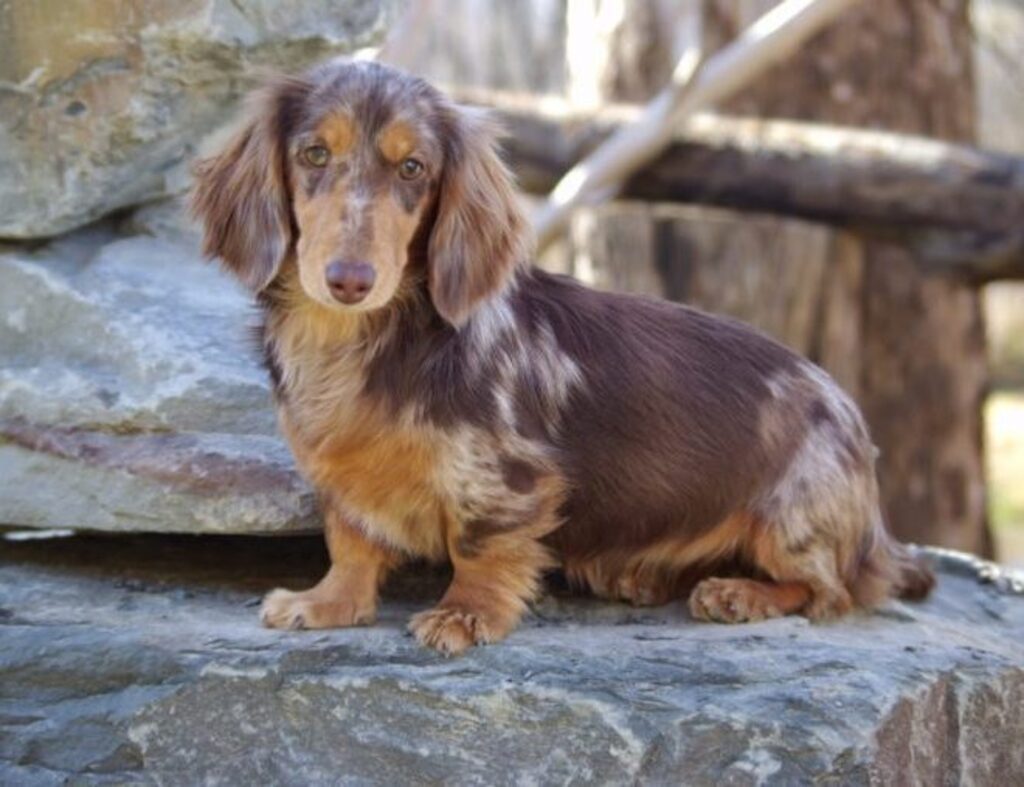 Dachshund is a German word that translates to Badger dog. Dachshunds got this name as they were originally bred by the Germans more than 500 years ago to chase away badgers out of their dens, or any such hiding spots for the hunters to capture or hunt them.

These courageous and fierce dogs with their small bodies that could get them into places a human can’t enter, made them amazing hunting companions.

Dapple Dachshunds have similar physical traits compared to a regular Dachshund except for the coat pattern. They are goofy-looking creatures with longer than tall bodies, which makes them look like a sausage on four legs. This is how they get the names like Wiener dog and sausage dog.

Their bodies are long and muscular with their legs short and stubby. Their ears are long and floppy, and their eyes blue and innocent. They have fluffy tails if you have a Dapple long-haired Dachshund.

One trait that is not observed in regular Dachshunds but is common in Dapple Dachshunds is paws that crook outwards. They are developed in such a way to aid the dog in digging.

Coat Colour and Pattern: you may see Dapple Dachshunds with black and tan or chocolate and tan coat colors as they are the most common colors among Dachshunds. Some also exhibit colors like red, cream, and silver. Blue Dapple Dachshunds are eye candy but these are much rarer.

Dapple is a coat pattern shown by this variety wherein they have a dark colour as the base with light spots or markings on top of it.

Dapple Dachshunds can be classified into three categories depending on their coat type:

Smooth haired Dachshunds have soft and shiny fur of a very short length.

Long hair Dapple Dachshunds as the name suggests have long hair that is soft and silky which blows in the wind, making them look glamorous. They are one of the most beautiful-looking Dachshunds.

Wirehaired Dapple Dachshunds have coarser hair of a medium length.

Only one light spot on a dark base color of their coat is enough to classify them as a Dachshund with a Dapple pattern. Although the amount of markings and their location varies from dog to dog. 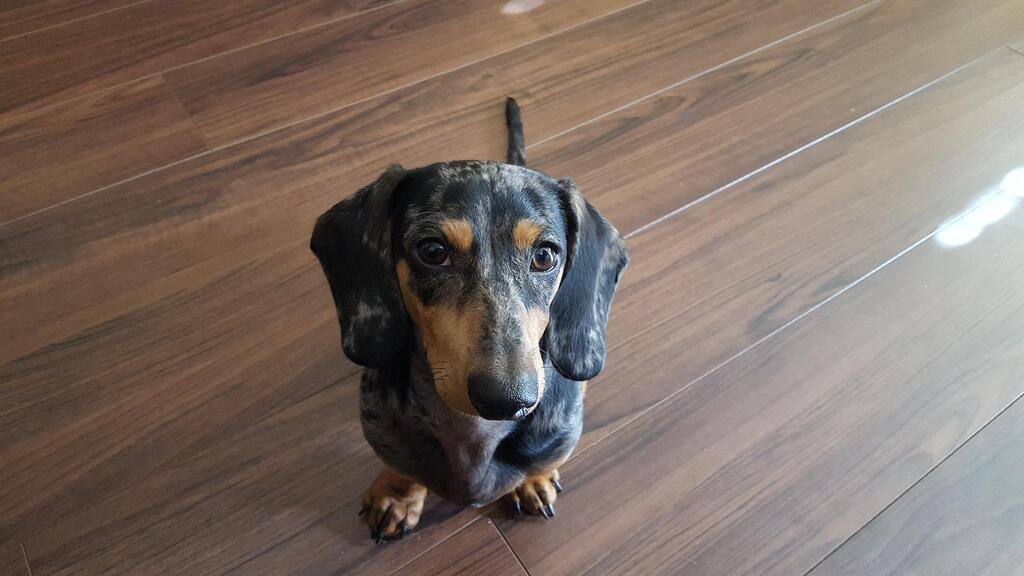 As feisty as ever, these little courageous cuties are bold and will never back down from a fight when it comes to their owner’s safety. If it wasn’t for their small size, they would make excellent guard dogs. They still qualify as amazing watchdogs and willingly protect their family by shooing away strangers with their barks.

Dachshunds are extremely loyal and form very deep bonds with their family. They are lovebugs to people they love and trust. When it comes to any sort of activity, do not let their size fool you. Dapple Dachshunds are very active dogs that love walks, exercises, and playtime.

Dachshunds are a bit wary of strangers and other animals but there’s nothing that good training and socialization cannot cure. They are a bit moody and sassy which makes them less tolerant towards small children who may not be aware of a dog’s boundaries.

We suggest you get them when your children are a bit older and understand as well as respect their space. Training can also help in making this process smooth. A Dachshund’s bark is loud enough to startle and surprise you so make sure you do not encourage it when they are young as it may become problematic later on.

The small and compact body of this dog is packed with a lot of energy and they will always be up for a game of fetch, a walk or a run around a block, or any other activity with the person they love.

Since Dachshunds were bred as hunting companions, they have a very strong sense of smell and a high prey drive so it is advisable to always have a leash on when you’re out in an unguarded area with your Dapple dog.

As their high prey drive can make them not follow your command and chase after a baby squirrel or any small animal in their sight. They may also leave your side if they smell something strong as their instinct is to follow their nose. This may prove unsafe for your dog and may put him into unwanted situations, thus a leash at all times is a must. You can also check this out about Dalmatian Puppy.

Do not take them for very vigorous and long walks as that’ll put too much strain on their little legs. Short walks, multiple times a day are recommended. A total of 60 minutes of exercise daily is a must.

If you live in a house with a backyard, make sure it’s fenced and the fence is dug deep into the ground. This is essential to keep them in as their amazing digging skills and small size make them very successful escape artists.

Training these dogs or any dog for that matter should be done positively. Never use harsh methods of training as it results in fear and other negative consequences.

Training a Dapple Dachshund is a bit tricky as they are strong-willed and moody dogs that are independent thinkers but if you stick to it and make it fun and rewarding for them, they’ll catch up to it.

Use positive reinforcement, praises, and rewards for training, and make sure you stay in the lead and make it clear that you are in charge.

Socialization is another extremely important part of training and must begin early on to get your Dapple Dachshund puppy comfortable around strangers and other animals.

Training and exercise help keep your dog stimulated mentally as well as physically and prevent the development of negative behaviors in them that may stem out of pent up energy.

Depending on their size, a small meal is sufficient to keep them happy and healthy. Do not overfeed them as they are prone to obesity. One cup of dog kibble split into 2 meals a day is enough for them. Select a high-protein kibble with low calorie and fat content.

If you decide to feed them raw or home-cooked meals, please consult your veterinarian to help you formulate a safe, well balanced, and right quantity of diet.

The amount of grooming your Dog Dapple Dachshund will require depends on the type of hair coat they have. Smooth and wirehaired varieties have short to medium coats that require brushing 2 to 3 times weekly.

The long hair Dapple Dachshunds need a bit more upkeep. You may need to brush them every alternate day to prevent mats and tangles and keep their fur free from any debris and dust.

They shed moderately and require a bath once a fortnight or once monthly. Make sure you get their nails trimmed regularly and brush their teeth daily to prevent periodontal and gum disease.

Cleaning of eyes and ears regularly is equally important.

How Much Does a Dapple Dachshund Cost? 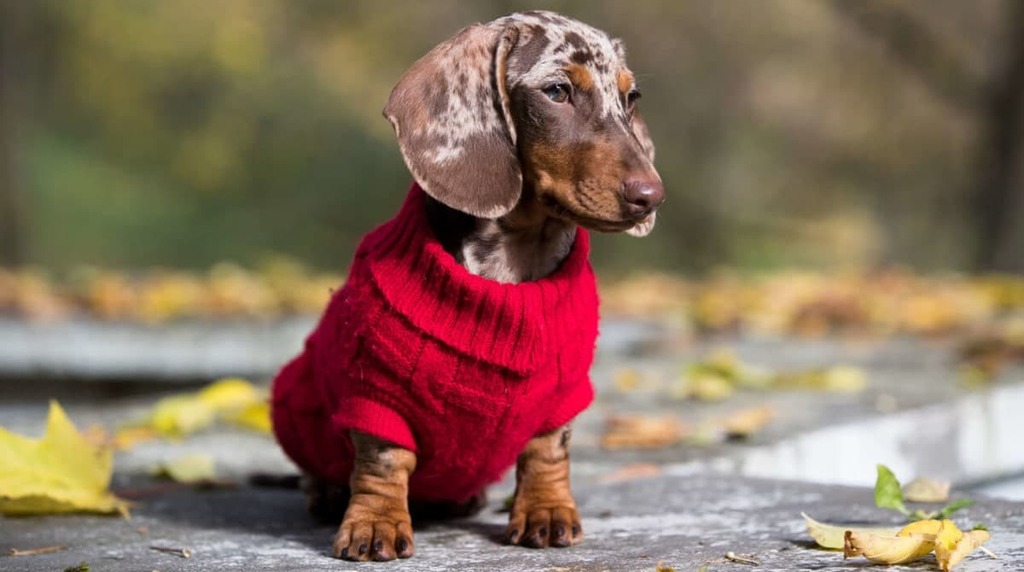 The price of a precious Dapple weenie dog falls in the range of 400$ to 1600$ depending on various factors like location, pedigree, the reputation of the breeder, quality of breeding, and many more.

They are priced much higher than the typical Dachshund due to their rare coat pattern.

Before getting a Dapple wiener dog you must know that this coat colour is due to a mutation and dogs with a Dapple pattern are more susceptible to certain health conditions compared to a regular coat one.

Some of the conditions they are susceptible to are

If you’re an apartment dweller who wants a small yet lively pup or a person with a huge backyard who wants a cuddle bug who equally loves to run around, Dapple weenie dog is the dog for you!

They require less effort to maintain but will return it with a very high amount of love and trust. So if you’re ready and willing to commit to their care, you’ll have a beautiful companion who will enrich your life in ways you never have imagined.