Falcon Vs Hawk: What’s the Difference Between These Birds?

Only professionals can easily recognize the difference between falcon vs hawk, but you will surely get confused between these two birds if you’re a beginner at birdwatching.

Falcon and hawks are two beautiful birds of prey that are often seen flying high up in the sky. Known for their speed and hunting skills, these two birds are one the popular topics in the bird-watching community.

Do you also feel that the identification of falcons and hawks is overwhelmingly complex and difficult? No worries, we’ve got you!

Today in this blog, we will tell you how you can differentiate between falcon and hawk. We’ve covered over eight differences between hawk vs falcon from which you can easily identify these two birds, from their physical appearance and hunting habits to their wings shape and flying style.

Even though both falcons and hawks birds have distinct features, including physical appearance, flight pattern, hunting habits, food, etc., still people get confused between the two and use the terms falcons and hawks interchangeably.

Do you also think that these two birds belong to the same category? No, Hawks and falcons are both two different species of birds!

Hawks are generally found in open spaces of North America, Central America, Jamaica, and the West Indies. At the same time, the falcons live around the globe in several countries.

Are you ready to know more about these two beautiful birds? Let’s start with falcon and hawk characteristics. 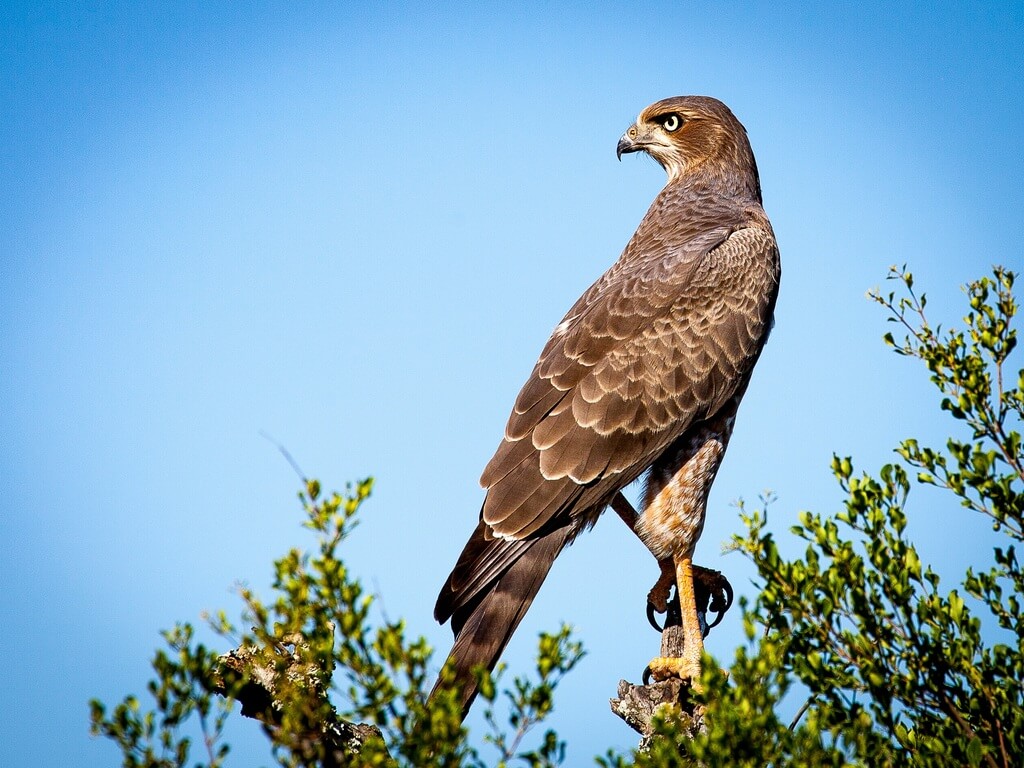 If you ask any ornithologist, they will say one line, “ the most distinguishing feature of falcons is their body shape.”

Yes, just look at the body because falcons have long and narrow pointed wings with long and slender tails. This also makes them distinguishable in flight. They have a beautiful plumage which is often in shades of white and gray.

Do you know that falcons have set a world record?

Yes, the peregrine falcon has the verified world’s fastest speed record of 242 mph!

This excellent speed makes this bird a great flier that can easily glide through the skies with a streamlined pattern. They’re extraordinary hunters and can easily capture their prey in mid-air. That’s why back in the days, somewhere between the Middle ages and Renaissance, these birds were also used to help hunters, and this practice is called ‘Falconry.’

As compared to hawks, falcons are smaller in stature with slender bodies. Also, if you look carefully, you’ll see that their wings are tapered with sharply pointed tips. You’ll be surprised to know that more than 40 species of falcons are present today.

Some of them are

Gyrfalcon is known as the largest species of falcon that is 20-25 inches long with a weight of around 2 to 4 ½ pounds.

Falcons are widely famous birds known for their immense speed. They can be found all over the planet. Apart from their super speed, they also have excellent eyesight. Another fun fact about falcons is that female falcons are usually larger than male ones.

What comes to your mind when you just even see a picture of this bird?

Surely words like wonderful and powerful will come to your mind!

Hawks can travel at high speed and can easily withstand long migrational travel. As per records, hawks can attain a maximum speed of 150mph. These fowls have curved, sharp talons, which help them to efficiently catch their prey. No wonder why they’re called powerful birds as they have outstanding strength and stamina.

Many people don’t know that these specimens belong to a broad raptors category. They are a more diverse group of birds that include several families with varying specializations.

There are two classifications in the hawk family – forest hawks (accipiters) and open country hawks (buteos).

Hawks have stocky, medium-sized bodies with long tails and broad wings. You can find these birds all over the world except in Antarctica. There are over 270 species of hawks in the world, including 17 native birds and five accidental ones in the eastern United States.

Some of them are

Like falcons, Hawks have excellent eyesight and can easily prey from up to 100 feet away. These gorgeous birds are generally found in North and Central America, the West Indies, and Jamaica.

Here is a comparison table between falcon and hawk:

So this is all about the characteristics and overview of falcon and hawk. But the real question is how to tell the difference between hawks and falcons? Below is the list of top 8 differences from which you can easily identify whether a bird is a falcon or hawk. Keep reading to know!

8 Key Differences Between Falcon and Hawk

From their physical appearance to their killing methods, there are some traits from which anyone can easily identify the difference between a falcon and a hawk.

Below are the top 8 differences between hawks and falcons that can point out their uniqueness clearly:

Now let’s know each trait of both birds in detail. 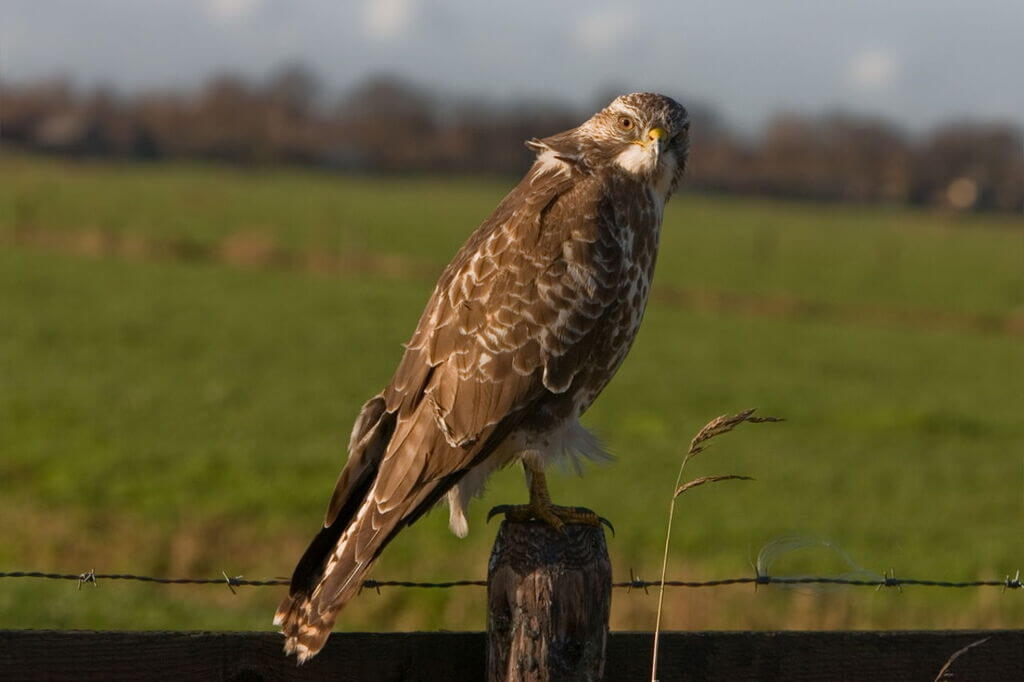 The size of both the birds is significantly different; that’s why it is one of the biggest differences. Hawks are larger and bigger than the falcons.

However, female hawks and female falcons are bigger than their male counterparts! 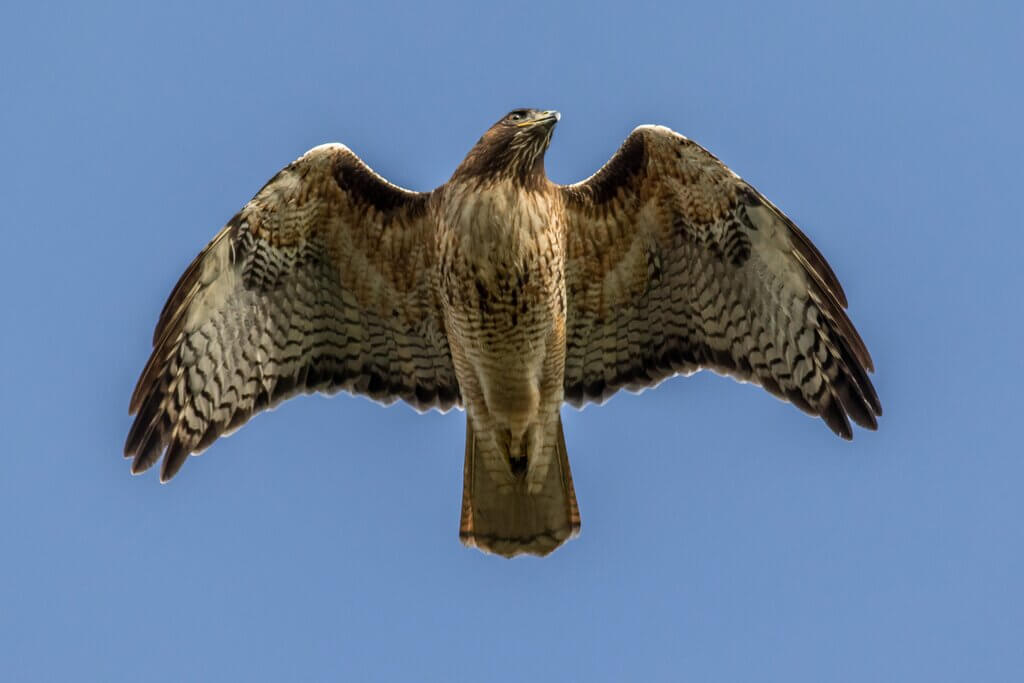 The next indicator is their wings. Compared to size, this is a more easy and reliable way to easily tell whether a bird is a hawk or a falcon. Even with a short glance, you can at least notice wing size and shape.

Hawk’s wings are short, wide, and rounded. Also, when spread completely, the tip of the hawk’s wings is round in shape. Some hawk species, including eagles, have distinct, separated feathers on the ends.

Compared to hawks, the falcons have long, slender wings that are pointed at the tip. Falcons can fly at high speed; that’s why they have more aerodynamic-shaped wings. 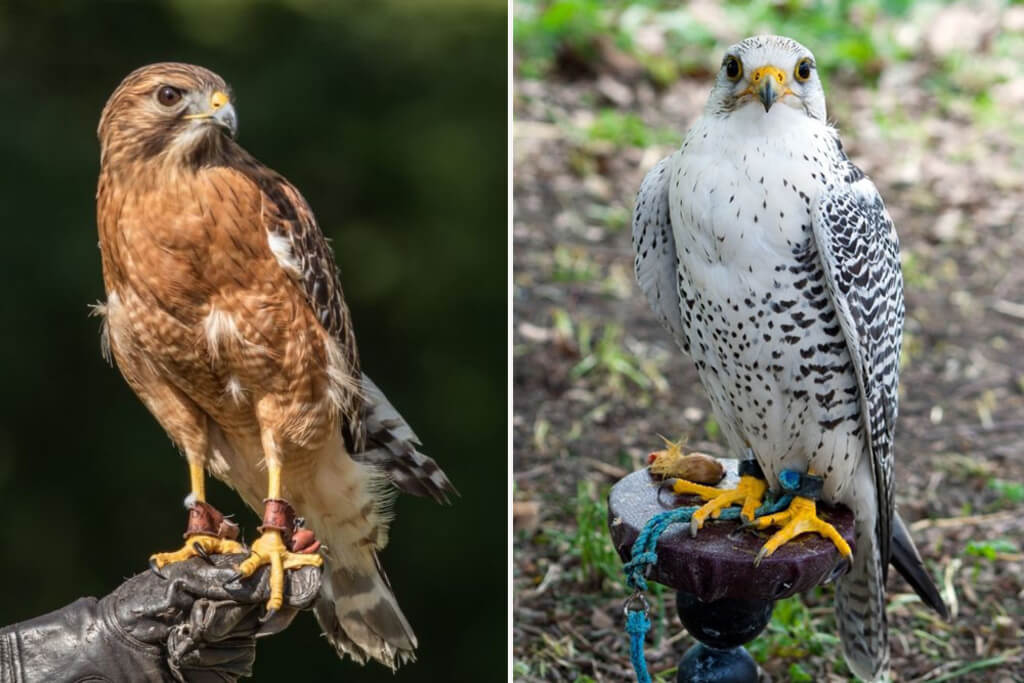 Yes, both birds can have some kind of similar colors. So how to tell the difference? Just notice the details of their patterns! And for that, you’ve to look at their plumage, wings, and underside.

Generally, most hawks have grayish, reddish-brown, or dark brown heads and feathers with a pale, striped underside. Also, their tails are longer and darker. Hawk’s feet and the upper part of the mouth are usually light yellows.

On the other hand, a falcon’s head and back are dark gray or bluish-grey. Falcon females have black-barred wings with the same color tone. Also, the neck part is usually pale and white. Apart from this, the most prominent feature of the falcon is its beautiful bright yellow eyelid, and these birds can also have black and white stripes and patterns on their belly and wing underside. 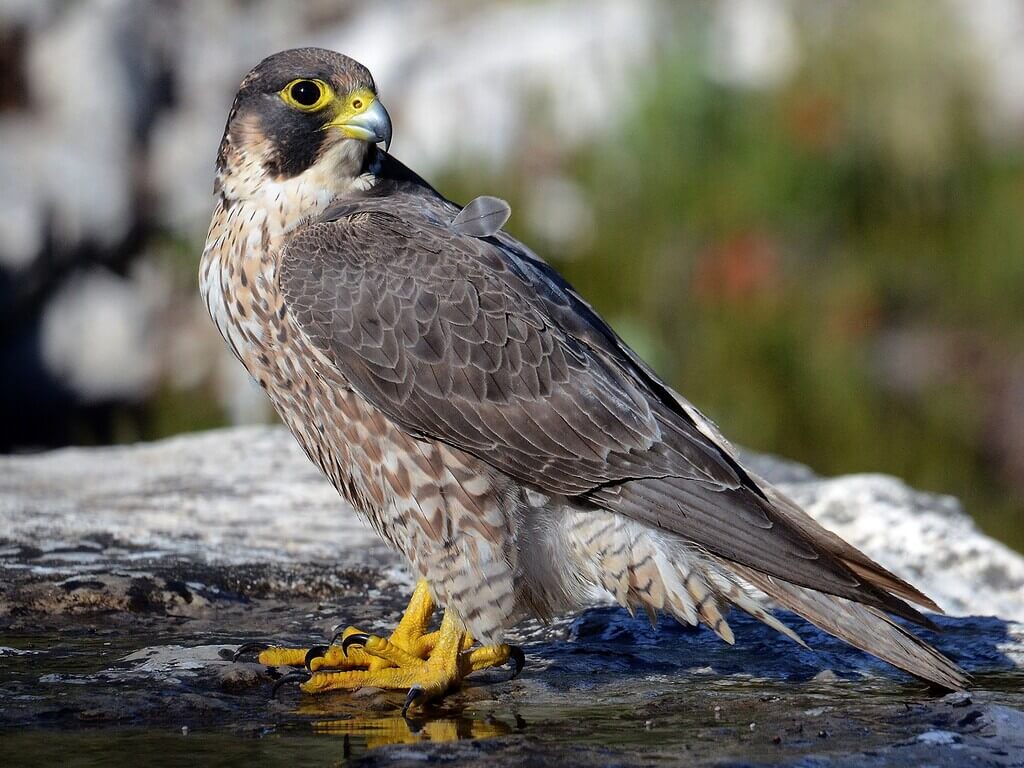 Many people think that the hawk and the falcon have very similar head shapes, but that’s not true! It might look the same from afar, but you’ll see many differences when you take a closer look.

The head of the hawks, including accipeters, buetos, and eagles, are sleek, slender, and pointy, and it is also slightly flat on the top as compared to the falcons are short and rounded.

Apart from the above features, other noticeable things are facial markings. Falcons have pretty identifiable facial markings, like cheeks are colored white as compared to hawks. These birds also have a notch or angular bend on their beaks, whereas the hawks have a simple curve on their beaks.

All falcons belong to the same genus, and there are only 3 to 4 groups, including kestrels, hobbies, and peregrines. Sometimes falcons are also separated as hiero-falcons and hawk-falcons.

On the other hand, hawks fall under several genera. Basically, there are 2 groups of birds that are called hawks: Accipitrine and Buteo. 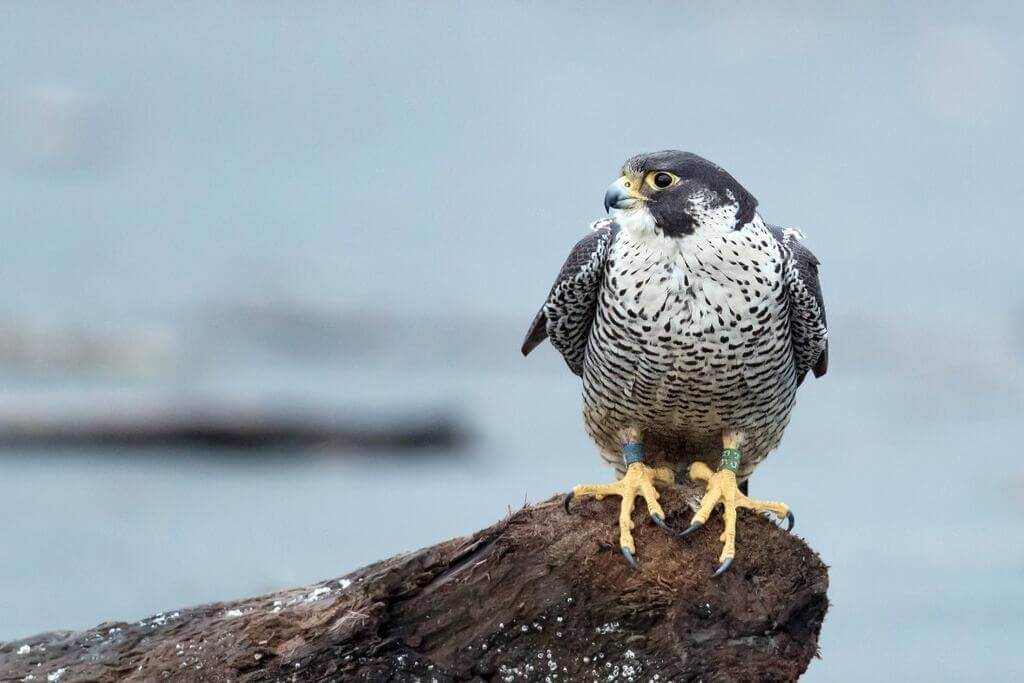 Both hawks and falcons are carnivores, and both use their talons to catch their prey. However, these two birds have extremely different killing methods. Falcons generally use their powerful beaks to grab and stab birds and other flying critters. While hunting, falcons always fly above and behind their prey.

Whereas hawks always use their strong feet and large, sharp talons to kill and tear their prey. These birds feed on birds but sometimes can also grab ground-dwelling prey like mice, rats, rabbits, and squirrels.

Their nesting ways and locations are also different and opposite from each other. Hawks prefer to build their nests high up in the branches of tall trees so that they will be safe from predators. Sometimes they also put their nests on other high places like cliffs, chimneys, window sills, and billboard platforms.

Adversely, falcons usually build their nests in tree hollows or on cliffs. They may stay in old existing artificial constructions like buildings and bridges, but they should be ten to thirty feet off the ground. 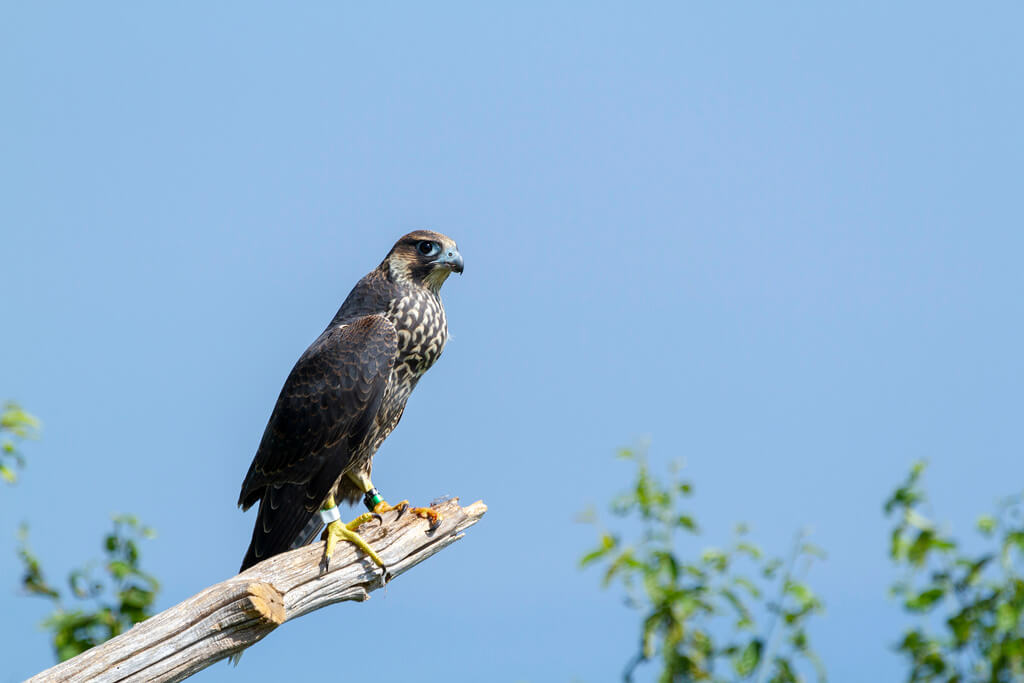 One of the best things about both birds is their flying pattern. Their flight pattern is distinguishable because there is a huge difference in their wing size, shape, and structure.

Compared to falcons, hawks have a bigger wingspan, which is why they fly in a circle. Falcons have the most strong wings that help them to fly at a high speed of over 100 miles per hour.

After reading this blog, now you know the basic and detailed difference between hawk and falcon. Hawks are bigger in size with large wings, and falcons have smaller wings, but they fly faster while flapping their wings more.

Hawks come in shades of brown, and falcons usually come in tones of gray. However, this also depends on the various species of these two birds. From their hunting methods to their flying style, there are so many ways to tell the perfect difference between these two specimens.

I hope this in-depth guide on falcon vs hawks and hawk vs eagle and eagle vs hawk has provided you with all the information you need. So, if you find this blog informative and helpful, please share it with your friends and family.