860 views
Table Of Contents hide
1 Great Dane, An Intimidating Breed
2 Who’s Timid Yet A Lovable Dog? Presley!
3 The Unspoken Bond Of Kids And Presley
4 Zoinks! Hold The Phone For Presley

As a child, we had always seen the Great Dane dog as the lazy, coward, and a constantly hungry animal. Yes, you guessed it right, these are all the qualities of the super-cute and cowering Scooby-Doo character.

It was a treat watching the character behind the TV screens always sharing funny moments with his alike companion Shaggy Rogers. Though being the dumbest and scared pair of the group, they always managed to help the gang solve mysteries.

Until the day, no one had ever crossed paths with Great Dane who shared the personality with the chubby and all-time favorite Scooby-Doo. It has always been a mystery and questions like “Is Scooby Doo Real?” flooded the internet.

However, the two-fold secret is that the world does have a Scooby Doo In Real Life. Jinkies! It’s just like someone gave the most valuable treasure of life in your hands.

His name is Presley and you can always find him cuddling under his owner’s lap, Sian.

The question arises, where is our big pup hiding from the fears of the world? Sources reveal that the owner lives with her dog in Oldbury of West Midlands.

Finding that your childhood just turned into reality might wanna make you jump as the wimpy Scooby Doo Dog jumps for snacks.

Now, you would say that to be like your adorable Scooby, the dog needs to be hell scared of everything. Well… Sian Barette claims that her Presley is really scared of anything and everything.

From a small vessel drop, cute tiny terrier to big horrifying dogs he is afraid of everything. Not to forget, also every person who is not his owner scares him.

Thank goodness, Sian is nothing like Shaggy Rogers and has a gang like the Scooby-Doo who is always solving terrifying mysteries. 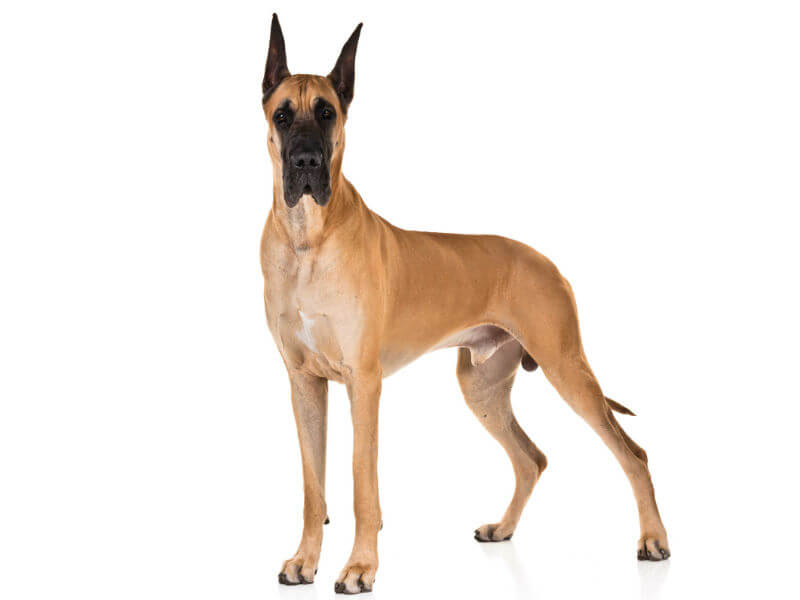 It is funny to know that most of the Great Dane dogs are known for their aggressive nature and tendency to bite. These are obviously good characteristics for protection from an intruder and unknown threat.

The big muscular body and heavyweight reassure the owners from big or small horrors, any time of the day. As a common fact, this breed grows to become 32-36 inches tall and 140-170 pounds heavy.

Who wouldn’t be scared of such a large and well-bred dog?

However, the fact turned tables when we discovered, Presley of Oldbury growing up like the dog of Scooby Doo cartoon. Let us hear it from Sian, a pet store owner who nurtured our Scooby Dog from birth and let us know that What Kind Of Dog Is Scooby Doo? 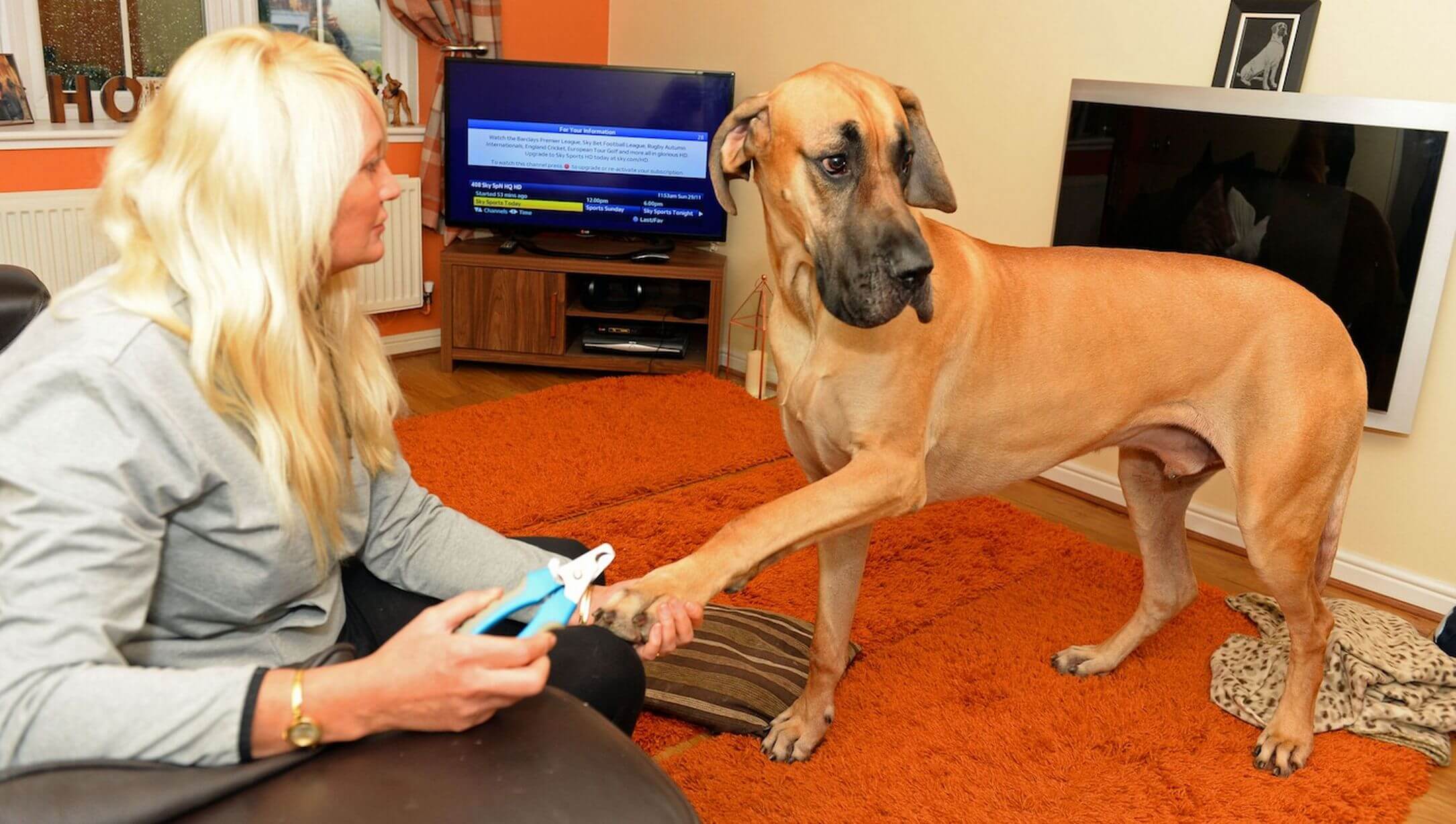 While we shared the thoughts on Great Dane of Oldbury having so much in common with the dopey cartoon character, here are a few things that his mother-figure has to say.

Sian believes that as she has bred Presley since birth, that is the reason why he always rushes in her lap to seek comfort when terrified (every move, every second scares him).

Unlike other Great Dane dogs, the hovering of vacuum cleaner and the sound of plastic bags rumbling has scared him. Sian finds it funny, how she has sneaked up plastic bags inside the house hiding from her dog.

A 6-ft tall on hind legs and healthy breed scared of such tiny things? It can be quite an embarrassment for the people around. However, Sian finds it adorable and cute, how Presley throws a different side of his powerful breed.

Another segment by Sian reveals, why her Scooby-Doo is adoringly lovable.

The Unspoken Bond Of Kids And Presley 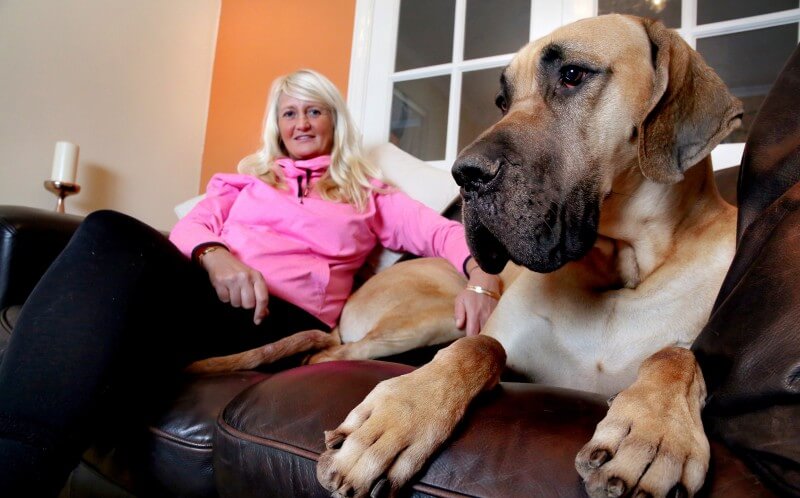 To explain the idea, Sian share the story of the time when she and Presley were out on a walk. After being scare by a small pup, our real Scooby heard the noise of cries of a little girl.

As usual, the sound was fearing for him, but in the later events, the girl’s tear stop as soon as she saw Presley. In the scene, the Great Dane really did nothing to the kid, yet somehow, the girl found comfort around him.

Seems as if Presley was born with a different purpose. As in the world where Great Danes are fear by people, our Oldbury Scooby Doo is just too humble and innocent to be afraid of.

The newly found trait of Presley, the Scooby Dog has won the heart of lots of people. Parents find it safe to bring their kids to play around with Presley.

Zoinks! Hold The Phone For Presley 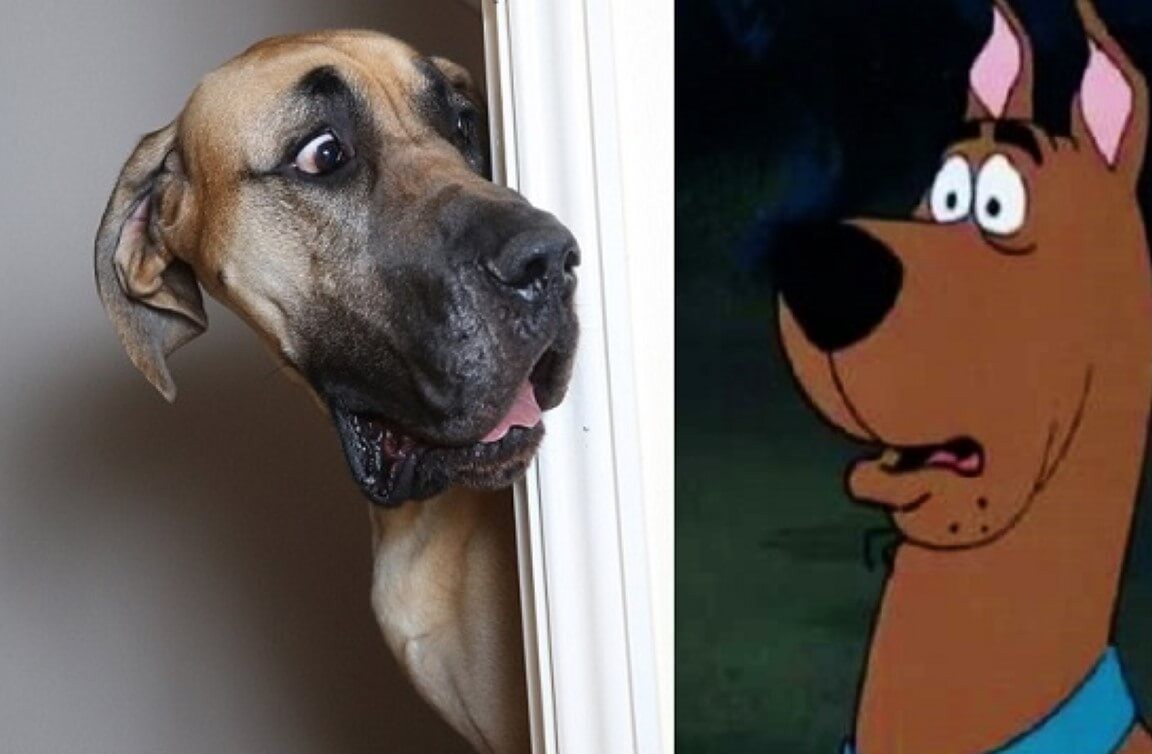 The imaginative mind of a kid always pondered over the fact “What kind of dog is Scooby-Doo?” Will the world ever see an alike dog in reality?

Presley surprises everyone with his aesthetics and temperament resembling the Scooby Dog.

Sian Barette always found her dog hiding in corners of the house because who knows what fear might have to puff him away.

Call it a shield or comfort pillow, you will always see Persely carrying a cushion in his mouth.

Sian says, he uses it as a protection from unknown fears.

So, if you put him in a situation like the Scooby-Doo dog, he is much likely to act the same as the character, shy, amateur, and confuse.

Well, yeah he may not be able to scream the catch-phrase. But looking at him might urge you to speak the tagline. Let’s call it together and end the discussion “Scooby-Dooby-Doo!” Find more such amazing facts about Dogs on Petsnurturing.