Many people get little furballs or turtles as pets, while some prefer unusual pets like hedgehog or skunk. If you belong to the population of the lot which prefers unique four-legged companions, then look no further because black throat monitor is just the friend for you.

These lizards are one of the many subspecies of monitor lizards found in South Africa, South to the Sahara Desert in Tanzania. This lizard can grow up to Fifty pounds and is known as the heaviest body monitor. This large Varanus has a typically mild temperament and is predatory; it usually feeds on whole prey items like mice.

Let’s look at this creature in detail: 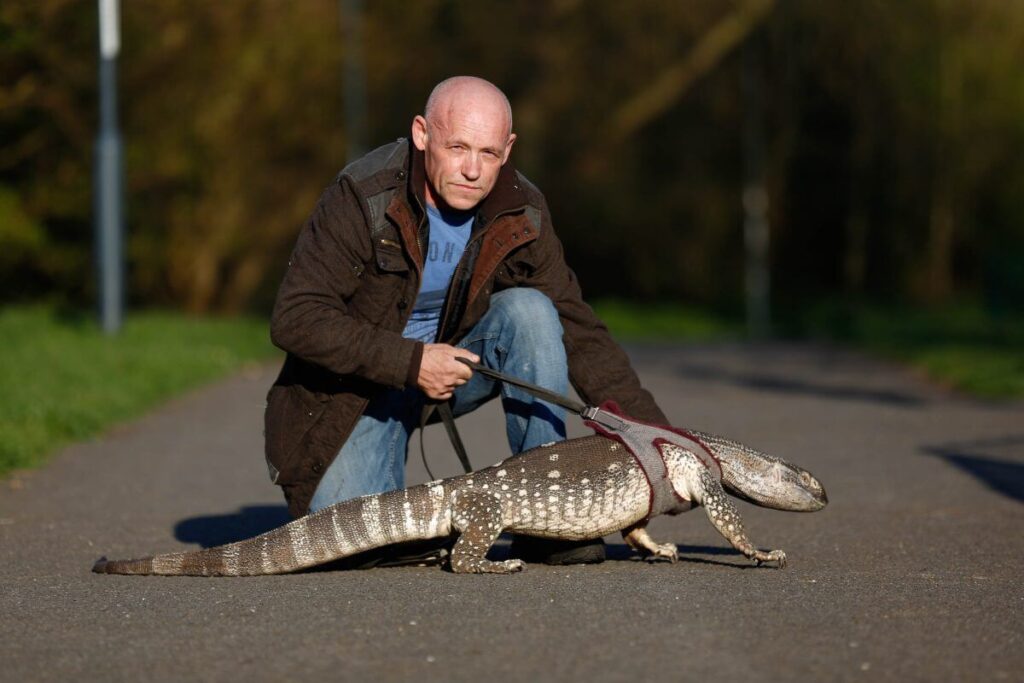 The first look at this animal will make you think it either as a small crocodile or giant lizard. The latter is correct. It is a lizard with a huge body.

It has a long neck, a powerful tail, claws, and a well-built body. It has a bulbous body and a convex snout.

The body has a scaled texture of brownish-grey and yellowish or white markings. The tongue is of the fork shape of pink or blue color.

You might have noticed the length of the black throat monitor mentioned in the overview. It is one of the largest lizards found in Africa.

With the intimidating appearance, the cape monitors scare away the people. You will be shocked to know that this huge lizard makes an exceptional pet. Yes! You read it right. PET. 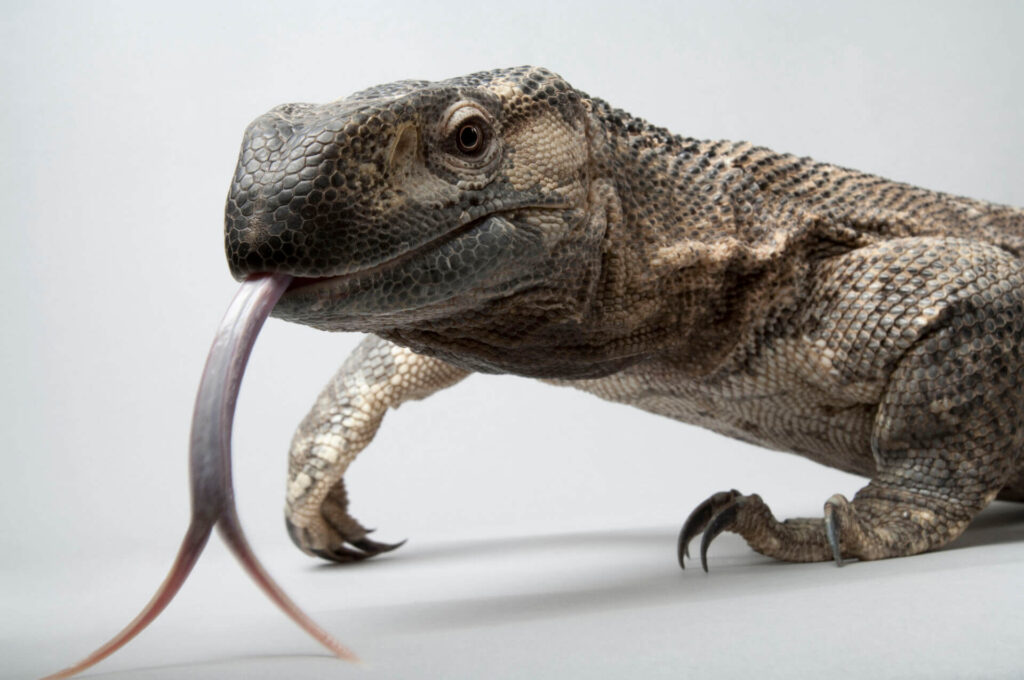 The phrase, ‘Don’t judge a book by its cover,’ goes perfectly with this monitor. If we look at the other exotic pets like geckos, lizards, and many more, they don’t like being handled by a human but that is opposite in the black throat’s case.

When you get it as a pet, make sure you have time to play and spend the time with it. If it’s not handled well by the family and there’s not much of human interaction when in captivity, it might turn aggressive.

This is strange, but black-throated monitors love to communicate and can recognize the owner and family members. Just like a dog or cat!

Now a thing to remember, when they get aggressive, they puff their body, hisses, and might bite too. We don’t need to tell you that a bite from such large lizard can affect negatively.

So whenever you see it puffing the body, stay away and wait till it calms down. It can get aggressive even when feeling threatened or stressed.

A Thing to know: Stress is bad for reptiles and can result in a weak immune system and a host of health problems.

Apart from all this, if you are dutiful and careful in handling the black throat monitor, it will be your best companion. As its ancestors lived most of life in the wilds, it has specific habitat conditions. Know everything about it, then get your hands on it! 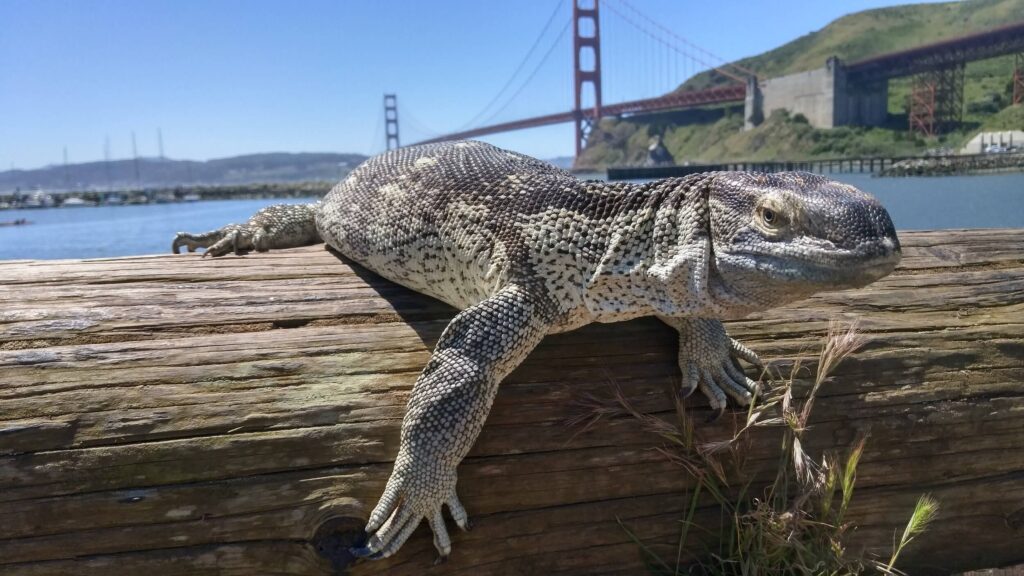 Don’t worry! We have covered you here as well. The black throat monitors will need a large enclosure where they can have free movement and can stretch its body.

You can take it on a walk with a harness and a leash, just like dogs. It is beneficial to them in many ways, such as socialization, UVB rays, and exercise. All this necessary for the fit and fine health condition.

They have mostly lived around the tress all their life, and hence they are not good swimmers. When younger, it can climb on trees and move to the branches, but once it grows up, it won’t be able to.

It is a diurnal creature and spends most of the time digging and hiding behind the rocks. It is one of the playful exotic pets, which will entertain you to the core.

While creating an enclosure for the new exo-pet, you will have to take care of the proper heat and light.

The Ionides Monitor require heat and UVB rays as a support, so add a bulb that emits these rays and creates a heaty atmosphere. The temperature should be around 90-degrees during the day time and 75-degrees at night. 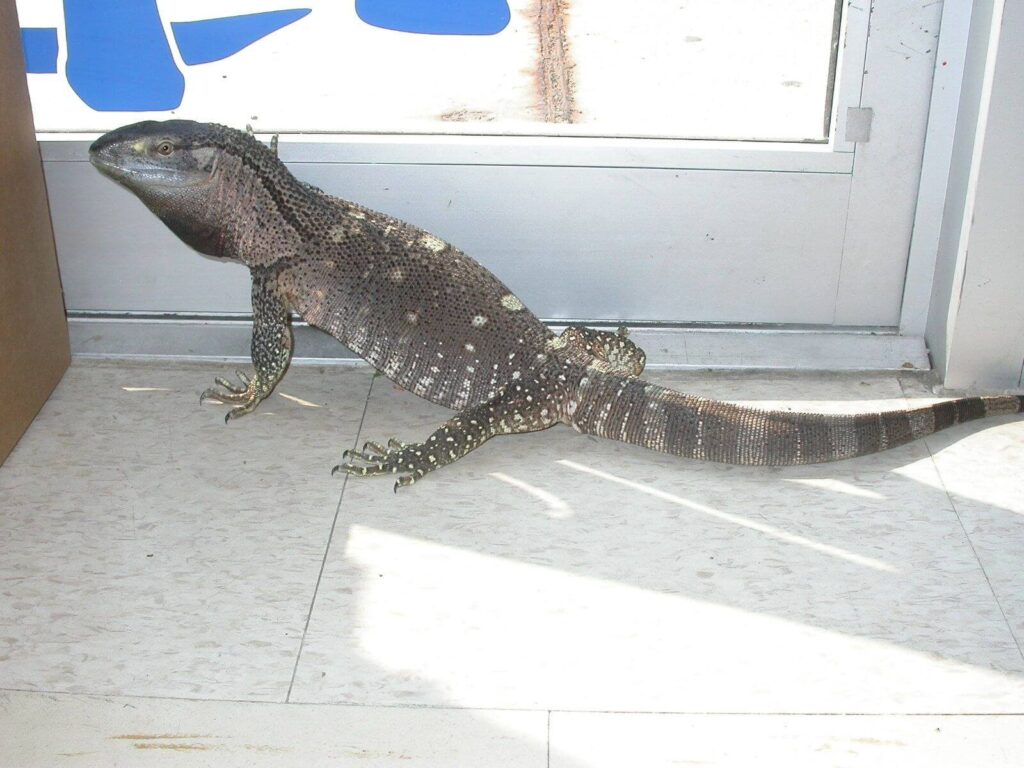 The diet of monitor lizard contains worms, birds, and other insects. The black throat monitor in captivity will prefer pre-killed prey, and the one raised in the wild will hunt its prey on its own. It can eat young chickens, snakes, rats, and even cockroaches.

They can eat dog and cat food, but it’s not enough for the number of nutrients it needs to survive. The regular meal should contain rodents and birds. You can add insects, large roaches, and worms in the meal.

Feed the monitor a few times a week and make sure to adjust the meal accordingly. You must change the food plan if you see it getting overweight or vice-versa. Weight your monitor lizard pet every month to evaluate the diet plan. 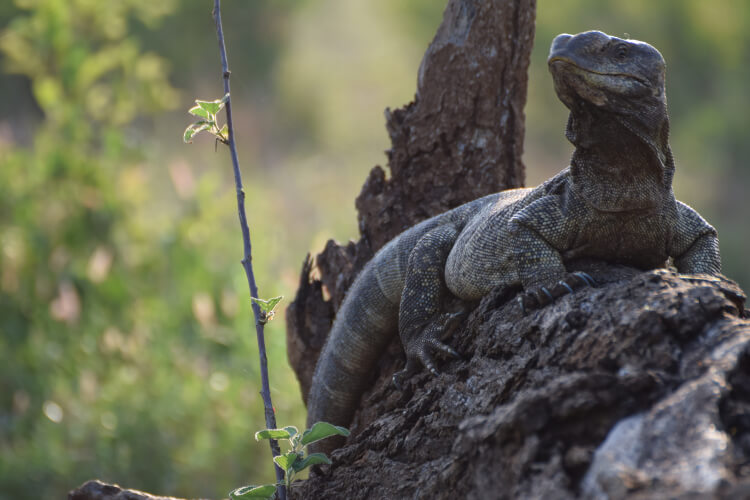 Like most of the lizards, the black throat monitor is prone to metabolic bone disease, which occurs due to the lack of UVB rays. Though they aren’t inclined towards parasitic infections like most lizards are!

While taking care of large lizards, you must watch out for constipation caused due to impaction. Like most of the reptiles, monitors also have a voracious appetite that makes them eat the things they can’t digest.

Whenever you catch the black throat monitor in unwell or lethargic condition, don’t look for the symptoms and try to solve it by yourself, you might end up hurting it even more. As soon as you realize its unwell, take it to the veterinarian who is skilled in treating the breeds of lizards.

This savannah habitat monitor can take a walk and are as intelligent as dogs.

They rub their prey in the soil before eating.

They can recognize their owners.

There are about 79 species of monitors.

They shed the teeth and regrow them entire life.

The black-throated monitors mates in the drier season and females lay eggs in the rainy season.

A female monitor can lay up to 37 eggs in a clutch.

Getting a Black Throat Monitor as a Pet:

This is all you need to know about the large lizard to get it home as a pet. It makes an incredible pet when taken care of properly. With its friendly temperament, it stays with its human for life long. As these are exotic animals, you will have to go through the rules and regulations regarding having them in your country.

Along with that, you will have to look for the availability of a veterinarian, specialized in treating the lizards. Plus, the accommodation and food requirements of the monitor too. If everything is fine and available, you are good to go!

For more information on exotic pet breeds like this one, visit Petsnurturing.