Bristle Worms and the Mystery Behind Their Existence

356 views
Table Of Contents hide
1 Let’s Get to Know These Saltwater Bristle Worms a Little Better
2 What’s the Role of a Bristle Worm?
3 What Do Saltwater Bristle Worms Feed On?
4 Reproduction in Bristle Worms
5 How Do Bristle Worms Get in Your Reef Tanks
6 Are Bristle Worms Parasites?
7 Types of Bristle Worms: Good and Bad
7.1 Good Bristle Worms
7.2 Bad Bristle Worms
8 How Can You Remove Them
9 Conclusion
Bristle worms are also known as the Polychaeta or polychaetes are a class of annelid worms that are generally marine. The body of these saltwater bristle worms is segmented with each segment containing a pair of fleshy protrusions known as the parapodia that bear numerous bristles. These bristles are made up of a polysaccharide called chitin.On average these saltwater worms are one to seven inches tall but some can even grow up to 24 inches in a tank. Bristle worms are nocturnal. In a tank, they are usually found in the substrate or under the rocks which is why it’s not easy to know if they are secretly living in your tank.

To find out if any saltwater bristle worms are lurking in your tank, you have to look closely at moving the rocks or displacing the tank substrate. Since they are nocturnal, it’ll be easier to locate them at night with the help of a flashlight.

Bristle worms are related to leeches and earthworms and can regenerate their damaged parts. 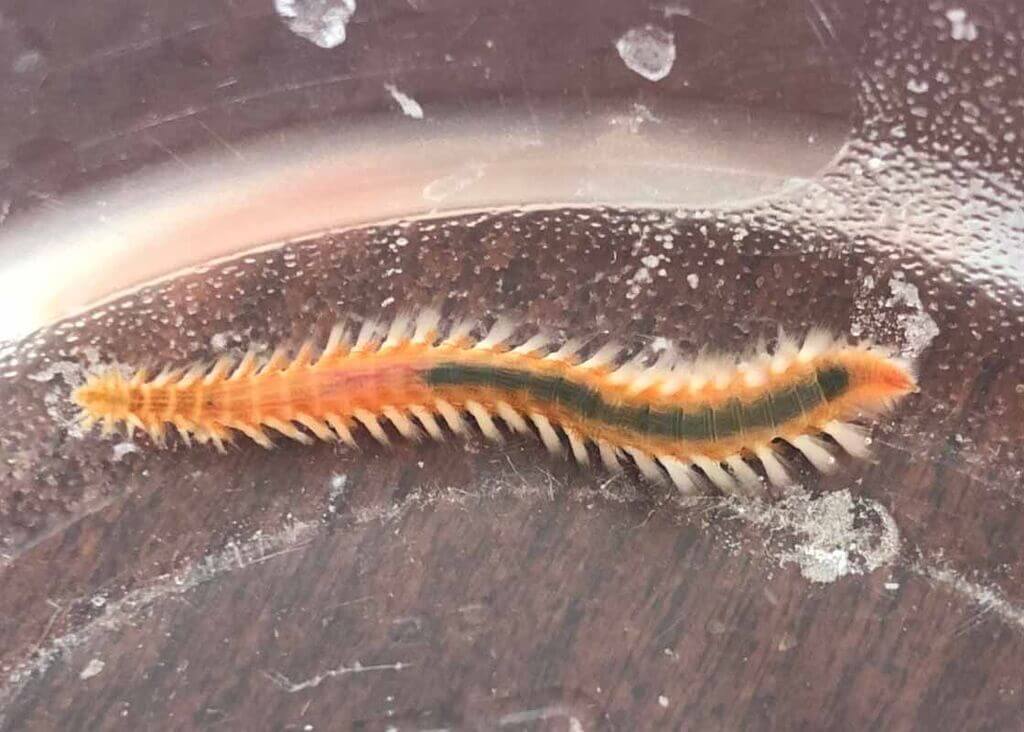 Bristle worms have adapted to every form of marine habitat, be it open sea, coral reefs, hydrothermal vents, or extremely cold marine habitat. There are around 10000 species of bristle worms out of which less than 2% are freshwater worms, rest are saltwater bristle worms, some of which even exhibit bioluminescence.

Polychaete in Greek translates to something with a lot of hair, which gives these creatures their name. They can use their parapodia in various ways, like a paddle for swimming, like a scoop for burrowing, and like legs for walking across the sea bed.

Their hard bristles protect them from predators as they make these worms hard to swallow for a predator. Some bristle worms even contain venomous substances in their bristles. Some polychaetes completely lack parapodia.

These champions of diversity have survived five mass extinction events witnessed by our planet which managed to kill most of the marine species of plants and animals. Bristle worms are one of the most heat-resistant species of animals underwater and hence you’ll find them even at hydrothermal vents.

Some saltwater bristle worms can survive without oxygen for 96 hours. Most of them are small bristle worms but the Bobbit worm is a giant bristle worm, a stealth predator, hiding beneath a seafloor and can reach up to the length of 10 feet.

Many times you can find the smaller bristle worms in your reef tank. The reef tank bristle worms are one of the things that most reef tank owners are creeped out by and would love to know more about them, especially about getting rid of them. But are all of them the bad guys? The answer is no and we’ll help you distinguish the good ones from the bad.

What’s the Role of a Bristle Worm?

They play an important role in the ecosystem by doing the work of a cleanup crew. They keep the coral reefs and the ocean bed clean by removing the dead and decaying biomass which can turn into potential waste substances.

What Do Saltwater Bristle Worms Feed On? 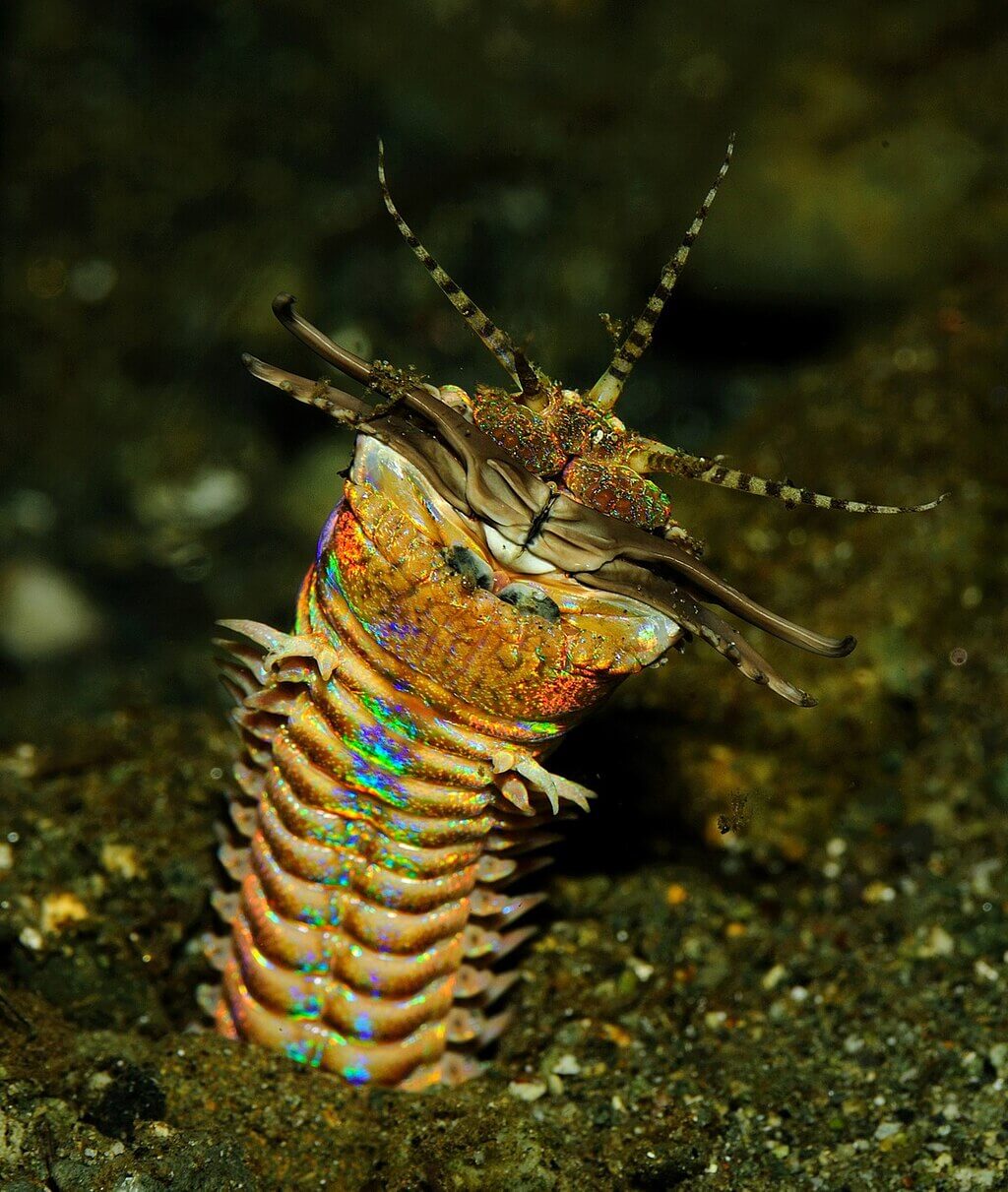 Bristle Worms are scavengers (except the fireworms). They feed on plankton, algae, dead and decaying organisms, detritus, uneaten food, biological waste, and anything that’s rotting or spoiling the water quality of the ocean or your tank.

Bristle worms reproduce like most marine species wherein the eggs and sperms are released in the surrounding water, forming a zygote which develops into a baby worm. Although some of these saltwater worms even reproduce asexually by budding.

How Do Bristle Worms Get in Your Reef Tanks 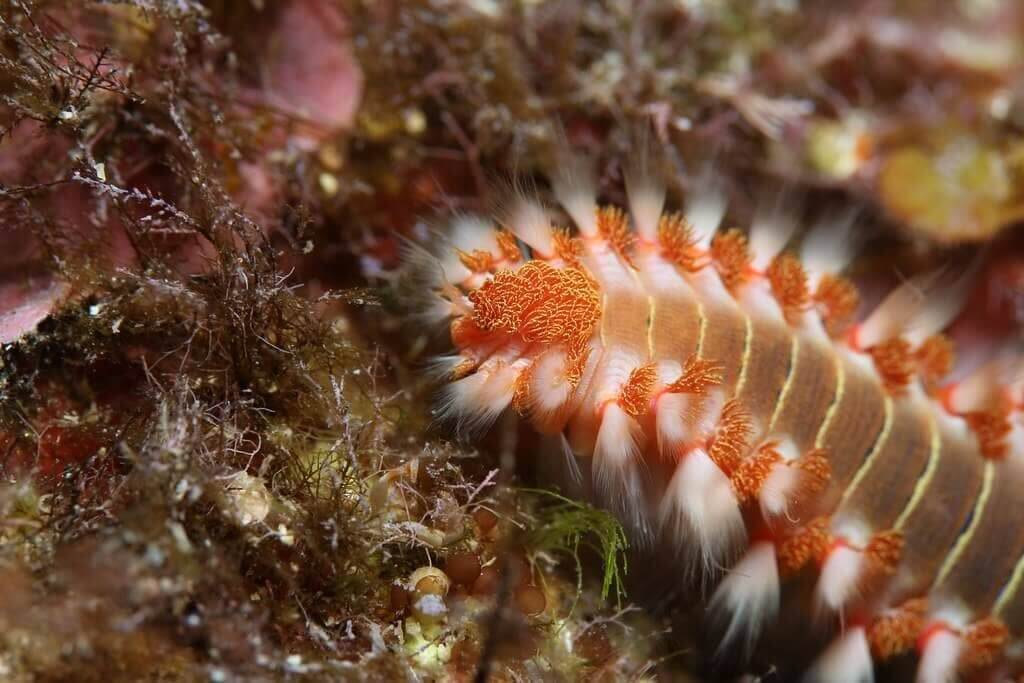 Bristle worms occur naturally on reefs and sandy lagoons as they are an essential part of the marine clean-up crew. When you add live rock and live sand to your reef tank, that may be quietly harboring these worms, these little creeps end up in your tank through them.

These are nocturnal species that aren’t very easy to spot. When rocks and sand are collected for aquarium trades, these worms come along with them and end up in a new environment. If you wanna make sure these little creeps don’t end up in your reef tank, make sure you examine each and everything carefully before adding them to the tank.

No, parasites feed off the host by living in or on them whereas these little guys do no such thing as they scavenge on dead, decaying matter, and leftovers. They also benefit the ocean or even your tank by their clean-up services which is far from anything a parasite can offer. Bristle worms are thus detritivores and not parasites.

Some people even choose to pay good money to add these cleanup crew members to their reef tank to help maintain the water quality. If you see them munching on a fish carcass, do not jump to conclusions and think they are the killers. As a scavenger, they will only feast on a fish or coral after their death, so the cause of death has to be something else.

The species of bristle worm that are capable of causing harm are termed pests. Fire worms are one such variety of bristle worms. They are carnivores in nature, so these guys can be blamed if you find them with dead fish or corals. 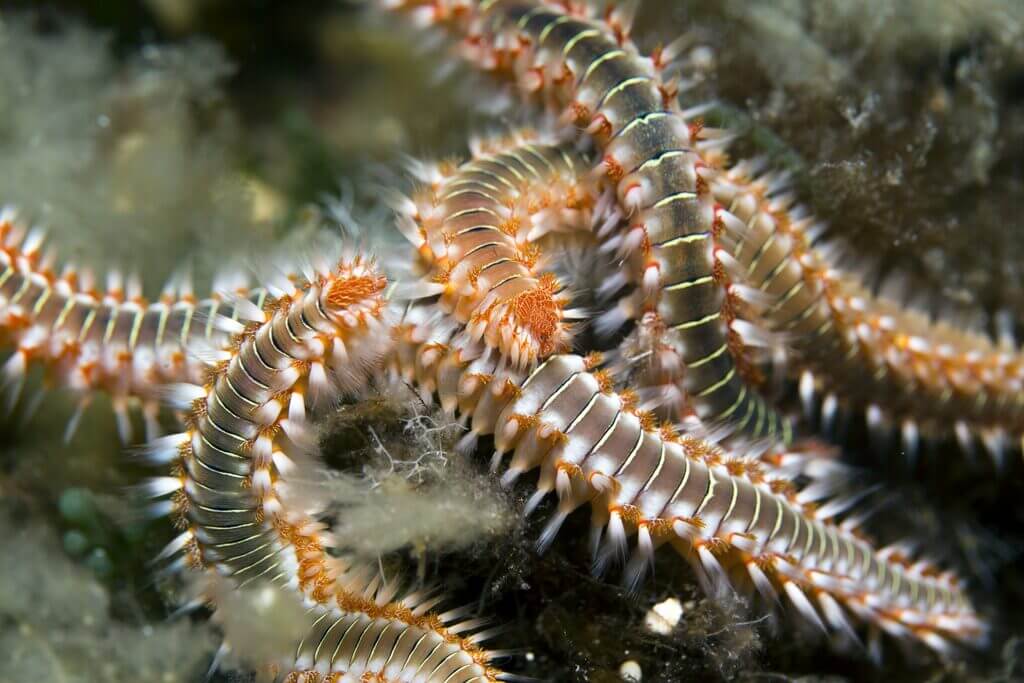 How will you identify if the one in your tank is a good bristle worm?

Note: Good one or a bad one, never touch a bristle worm with your bare hand. These tiny bristles are capable of penetrating your skin and causing irritation or worse if you touch a fire worm.

First of all, you gotta make sure it’s dark enough for them to show themselves. Once it’s dark they’ll head out from their hiding place, if not, you can try displacing the sand. Once they are out, observe them using a flashlight.

Good bristle worms usually have evenly spaced bristle tufts on both sides, throughout their length. The bristles are white and brightly hued whereas the worm can have a dull gray or a colorful body. You can also take a picture of the worm and ask an expert from a local aquarium store to identify it for you.

You might find that even the good ones aren’t very pleasant to look at but at least they are harmless.

Diet of a good saltwater bristle worm: as discussed earlier, they’ll eat anything from fish poop, dead and decaying matter, carcasses to anything that’s polluting your tank. You need to feed them anything extra even if they are an intentional part of your reef tank.

Can they form an army and overtake your tank? Nope. Bristle worms’ reproduction depends on food availability, if you’re mindful and only put enough food for your fishes, there won’t be excessive leftovers for these little cleaners too much to munch on, thus controlling their population.

Bad bristle worms or fireworms too have the tufts of bristle on both sides of their body, along the entire length just like the good variety but there’s a reddish color base along with its bristles with white towards the tip. Along the body of the fireworm are red, yellow, brown, or green gill filaments.

They are carnivores that don’t wait until dark to feed, thus if you see a bristles worm emerging in bright daylight, there are high chances it’s a fireworm.

Fireworms have stinging bristles that are toxic in nature. A sting from a fireworm can be a painful experience. It is advised to not rub the affected area. You can place the affected finger or hand in a warm vinegar until the bristle dissolves or see a doctor if it’s too unpleasant.

Fireworms are carnivorous predators and they must be removed if you want your tank to be a peaceful place for other aquatic species. They feed on mollusks, crustaceans, coral, and even smaller fishes.

How Can You Remove Them 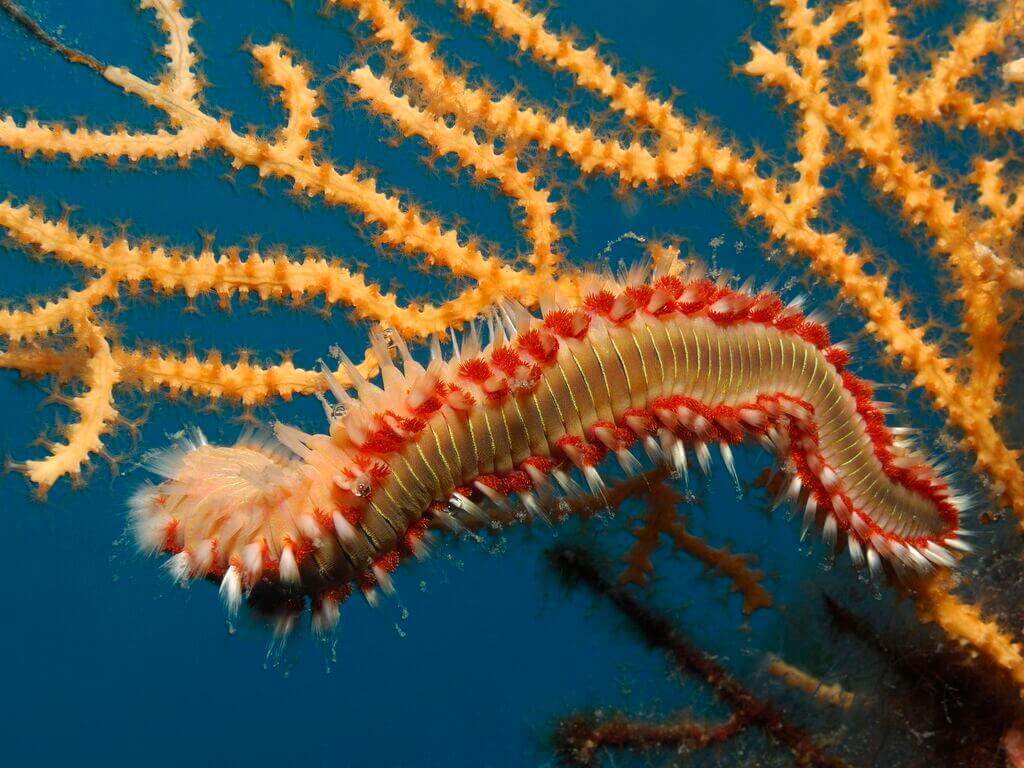 Irrespective of the type of bristle worm if you don’t want these uninvited guests chilling in your reef tank, they can be removed but you gotta rush the process if you notice the bad guy aka the fireworm.

1. Adding natural predators to your tank: Though caution is advised while introducing any new species to your tank as they may even feed on things other than the bristle worms. Predators that feed on bristle worms are Dottyback, Bird Wrasse, Sunset Wrasse, Maori Wrasse, Coral banded shrimp, and Arrow crab.

2. Physical removal: Do not touch them. Wear gloves just in case you encounter a fireworm among the innocent bristle worms. Then carefully place the suspected rock in dechlorinated freshwater, after a few minutes the worms will be shocked out of the crevices and appear at the bottom of the vessel.

The ones that are still stuck to the rocks can be removed cautiously with the help of tweezers, make sure you hold them in the center and remove them completely. Make sure the rock is free of any worms then place it back in the water.

3. Trap kits: There are various trap kits available for the passive removal of bristle worms. They are designed in a way that once a bristle worm slights in, it can’t get back out.

In conclusion, not all bristle worms are bad and even though you might flinch at the sight of them, they make it easier for you to maintain your tank except when you encounter a fireworm. Don’t panic! Even fireworm infections can be handled and need not overwhelm you.