Different Types of Dwarf Hamster & How to Take Care of Them

Hamsters are rodents belonging to the scientific order Rodentia that are a popular choice as small pets. The hamster commonly kept as a pet is the golden hamster also known as the Syrian hamster but in recent times, the dwarf hamster species have been seen to be gaining a lot of popularity. Dwarf hamsters as the name suggests are really a number of species of hamsters that are tiny, so tiny that they’ll fit in your pockets. Just like the Teddy Bear Hamster, these cute dwarf hamsters are primary to desert regions around the world.

Unlike their larger counterparts, that is normal-sized hamsters that are territorial in nature, the dwarf hamsters are social and thrive better in small groups or pairs. These cute dwarf hamsters are fun to watch and are pretty easy to handle due to their docile and social nature.

Dwarf hamsters in their natural habitat usually remain underground during the daytime to avoid being caught by a predator. They primarily feed on seeds, fruits, etc, and occasionally eat insects. You will get to know a lot more about hamsters as we dive deep into the dwarf hamster guide.

Let’s get to know more about various types of dwarf hamsters: 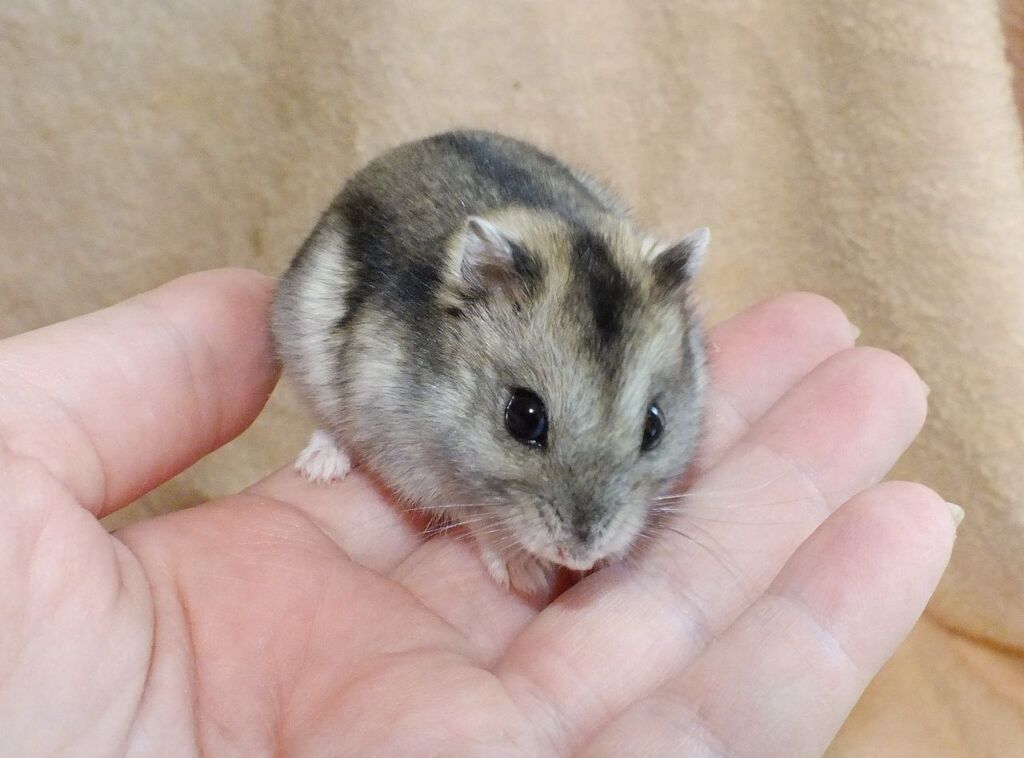 As pets, they may not shed their coat during winter as they do not face the extreme conditions they face in the wild and provide artificial light. Winter white hamsters, Russian hamsters, or Djungarian hamsters originate from white fields of Kazakhstan, meadows of Mongolia, Siberia, and Manchuria.

The Djungarian hamster has white fur on its belly, unlike the Campbell’s hamster which they shed in winter. The Djungarian or the Winter white hamsters are comparatively more tolerant to colder temperatures.

The Winter White hamster’s coat is not as wooly as compared to the Campbell’s dwarf hamster. They find in colors like sapphire, pearl, and sapphire pearl. Their fur changes back to dark or pale brown during the summers. 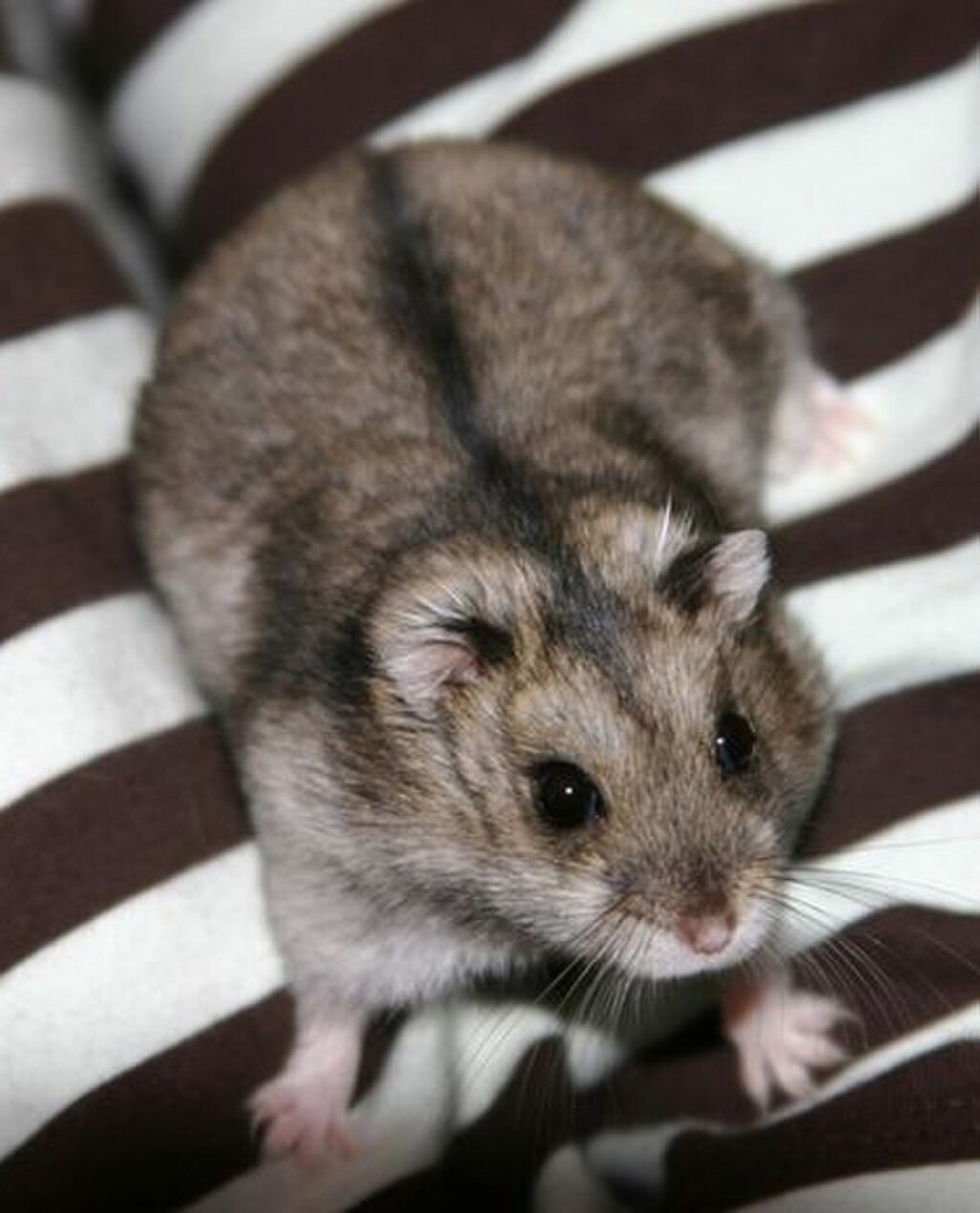 In the wild, they live in burrows that they keep warm by collecting and placing wool and grasses. In both wild as well as in captivity, Campbell’s hamster marks around their territories using scent produced from Harderian glands which are skin glands located behind the ears.

They can handle easily which make them a good pet. They are social and prefer being kept in pairs or with other hamsters of their species. Also, they are nocturnal in nature. Campbell’s hamster does not turn white in winters like the Russian dwarf hamster. They are also less tolerant of cold temperatures.

This cute dwarf hamster has cheek pouches that extend from the mouth all the way to its hind limbs. 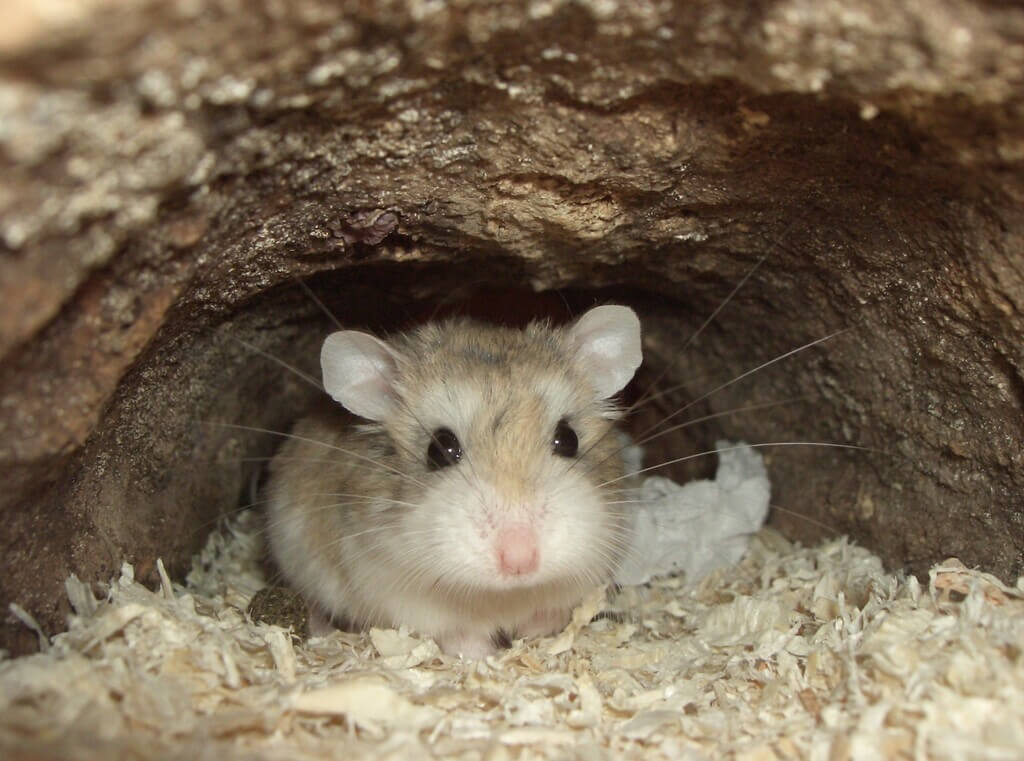 Roborovski hamsters find in the deserts regions of lake Zaysan in Kazakhstan and regions of Tuva, Mongolia, Xinjiang, Yulin, and Shaanxi in China.

Roborovski dwarf hamsters have eyebrow-like white spots and do not have the dorsal stripe like the other dwarf hamsters. They are also known for their speed and can run up to 6 miles a night. They are crepuscular and most active during the twilight hours.

Roborovski hamsters are smaller than the other varieties, they have sandy coloration and lack the dorsal stripe. They have a rounded head and they do not appear rectangular when observed from behind.

The Roborovski dwarf hamsters are more predisposed to stress and are less comfortable with handling when compared to the other varieties. 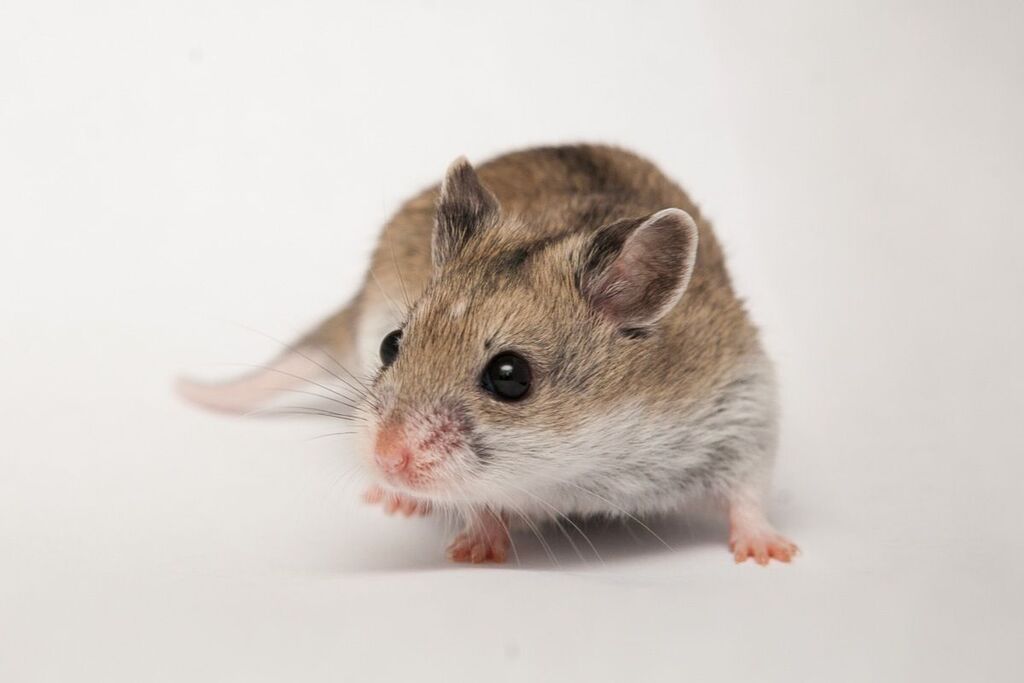 The Chinese dwarf hamster is originally from the Northern Chinese and Mongolian deserts. Their distinguishing feature is their uncommonly long tail compared to other hamsters, most of whom have stubs for a tail. This particular feature also gives them the name, the rat hamster. Technically, the Chinese hamster isn’t a dwarf species but is just as small as the dwarf varieties.

The Chinese dwarf hamsters have a white underbelly, with a dark stripe running along with their greyish-brown topcoat. They are social and prefer to be hushed in pairs or with littermates.

They are docile in nature. Chinese dwarf hamsters are nocturnal animals but stay awake for short periods between naps during the daytime. These cute little hamsters are curious in nature. They also love to play in their cage.

Chinese dwarf hamsters consider intelligent and do not take much time to recognize and bond with their owners. They use their scent glands to navigate their way and have cheek pouches extending from their mouth to shoulder.

The Chinese dwarf hamster is omnivorous in nature and feeds on seeds, fruits as well as insects.

Also Read: How Long do Hamsters Live? A Detailed Guide on Hamster Lifespan 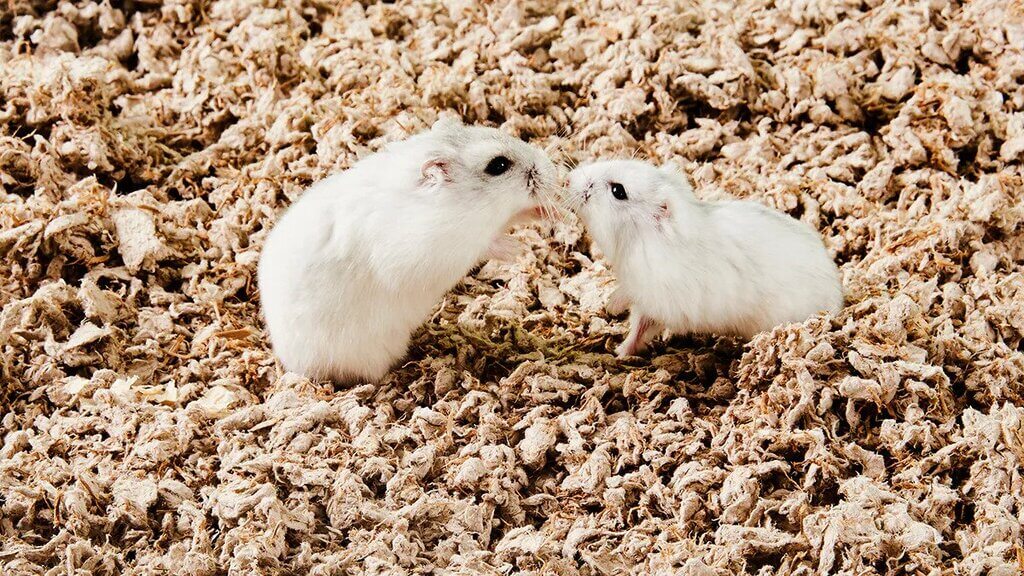 Most dwarf hamsters are social in nature and do not mind being handled. If they feel uncomfortable being held, they may let you know by nipping your fingers. However, Chinese dwarf hamsters and Roborovski hamsters do not usually nip or bite the handler. Calm and gentle handling is a must to avoid putting them under unnecessary stress.

Dwarf hamsters move around quickly. Make sure you’re sitting down or in a secured space while handling them in order to prevent them from escaping from your hands and falling on the ground as even a fall from a couple of feet can injure them severely.

Keep your dwarf hamster away from other pets that aren’t their own species to prevent stress and injuries to the hamster.

Dwarf hamsters are mostly clean and hygienic in nature and do not require regular baths. They rarely need to be bathed. If they do get a little dirty they can be sponged with a damp cloth or tissue with lukewarm water.

They do love dust baths and you can provide them weekly.

Sometimes their teeth grow too long, and they may need trimming by a veterinary professional.

Your dwarf hamster should have access to a bowl of clean drinking water and food throughout the day. You can feed them once a day, ideally during their active hours in the evening. You can buy a commercial hamster food, specifically formulated for dwarf hamsters.

Discard leftovers before refilling their food bowl. You can also offer them limited amounts of timothy hay, grains, finely chopped fruits, and vegetables, certain seeds, oats, etc but this shouldn’t exceed 10% of their total diet. Consult your veterinarian to help you decide the right amount of food for your dwarf hamster to avoid overfeeding or underfeeding.

Do not feed sweets or food that is high in fat content. Chocolates, caffeine, alcohol, avocados, and nuts are toxic to hamsters.

They acclimatize well to an average household temperature of 26 to 28 degrees celsius. Do not expose the hamsters to temperature changes that are extreme. Their cage should never keep in direct sunlight.

Dwarf hamsters are social and must be housed in pairs or in small groups. Do not house any other species with the dwarf hamster. Their habitat should be made of plastic, glass, or metal with proper ventilation.

Their habitat should be escape-proof and have a flat bottom with a lot of space to play and exercise. A 2-3 square feet cage with a 1-foot height may prove sufficient. 1-2 inch bedding must cover the floor of their enclosure. For bedding, you can use crumpled paper, wood shavings, or high-quality paper.

Clean the enclosure weekly and change the bedding. You can wash the enclosure using the disinfectant but make sure you rinse it well and make it completely dry before placing the hamsters back in it.

Don’t use cedarwood shavings as bedding as it is toxic for small animals.

You can also place an exercise wheel in their enclosure and provide them with plenty of wood or mineral chews to nibble on. This can keep the growth of thrift incisors in check. Create a nest or sleeping spot where your hamster can hide and feel safe when it needs to.

Dwarf hamsters are prone to a variety of health problems, and before getting one home make sure there’s a veterinarian near you.

Hair loss and skin lesions are very common in dwarf hamsters and the most common causes are the animal rubbing itself on something in the enclosure or by getting into a fight with another one of its cage mates. Any skin abnormalities should check as soon as possible by a vet before they become infected.

Sometimes their teeth can become overgrown, especially if they don’t have enough chewable materials in the enclosure to wear their teeth down. Overgrown teeth can affect their ability to eat, so they will likely to trim by a vet.

Yellowing of teeth is normal in hamsters unless you think it’s excessive which can confirm by your vet.

Hamsters also are prone to digestive issues. One of these is Wet tail which is a bacterial infection that causes diarrhea, resulting from stressful or unsanitary living conditions. Hamsters with wet tails should treat immediately by a vet, as this condition can lead to death within 24 hours from the onset of symptoms.

Some dwarf hamsters, mainly Campbell’s hamsters and Chinese hamsters are commonly prone to diabetes. However, this often can prevent by keeping your pet’s diet low in sugar, and fat content and providing plenty of exercises. Overfeeding must also avoid preventing obesity-relating health issues.

A healthy hamster will stay active and social. They will have no discharge, bright eyes, shiny fur, normal gait, and unlaboured breathing.

Dwarf hamsters may not interact with you like a dog or cat but they will definitely recognize you and love you back for loving and caring for them. They also are much easier to keep and care for as compared to dogs, cats, or any other larger animal. Hamsters require very little work on your part and add a lot of cuteness and joy to your home.

Be it just observing them do their daily activities or watching them run on their exercise wheel, these little cuties will surely bring a smile to your face and light up your mood.