184 views
Table Of Contents hide
1 Origin
2 About the Moss
2.1 Nomenclature
2.2 Uses of Taxiphyllum Barbieri
2.3 Java Moss Care
2.4 Maintenance of Java Moss
3 How to Grow Java Moss in an Aquarium
4 Conclusion

Java moss is an aquatic plant that is a great choice for aquariums that hold small tropical fishes belonging to freshwater. It is an easy to grow plant that is tolerant to a wide range of temperatures, into any substrate. It is a famous choice of most people with freshwater aquariums with tropical fishes. Scientifically, Java moss is known as Taxiphyllum Barbieri. It is also known as willow moss, triangular moss, Christmas moss, dubious bladder moss, Singapore moss, and mini moss.Java moss is native to southeast Asia. It attaches itself to various surfaces like rocks, driftwood, roots of other plants, etc. Java moss is easy to grow as it does not require any special attention and it accepts almost all kinds of water as well as light quality.

Java moss is native to Southeast Asian countries like Japan, Malaysia, Indonesia, the Philippines, islands of the East Indian archipelago, and Java. It is commonly found in tropical climates and grows on rocks, tree trunks, roots, etc.

Java moss is one of the most commonly used moss in aquariums and thus it is widely sold throughout the world and used in aquarium trades across the world. 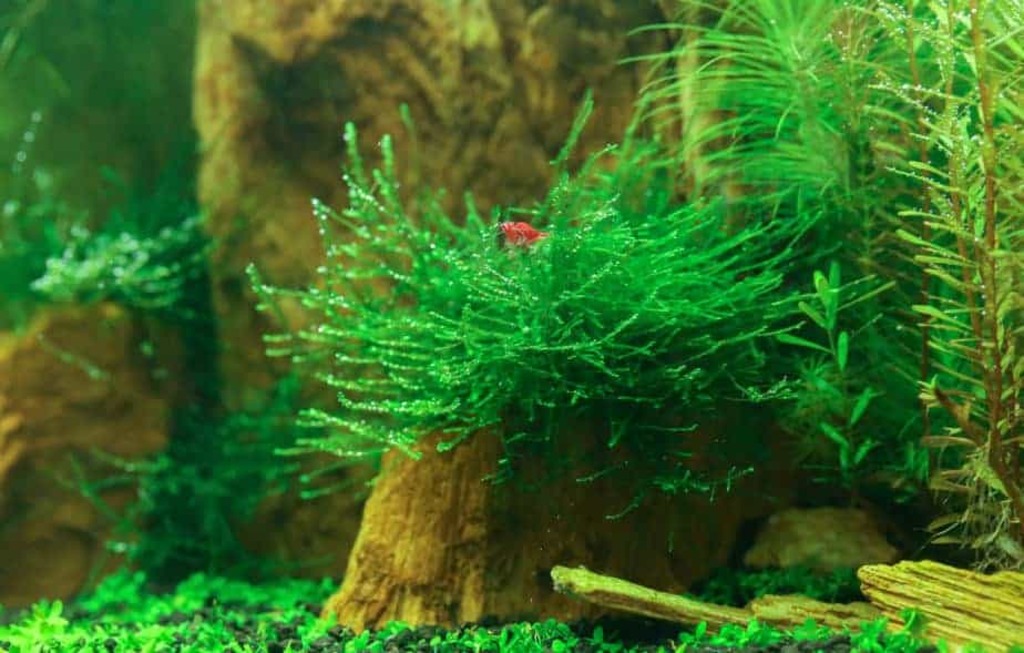 Java moss belongs to the family Hypnaceae and produces amazing results when used for Aquascaping. It has many other benefits including protection to fish eggs and larvae, improving tank health, and as food for fishes.

Adding java moss to your tank can give it a lively look. It is almost impossible to kill as it attaches to most surfaces including the artificial decorations used in your tank. It is delicate looking with small irregular branches with the stems covered in tiny, overlapping, oval-shaped leaves.

Aquarium or water java moss has brightly colored and smaller leaves as compared to the land-dwelling variety. Java moss for aquariums uses rhizoids to attach itself on surfaces of various things in the aquarium. They only use the object for attachment and do not depend on it for nourishment. Java moss has rhizoid and no real roots, hence it uses its leaves and stems to absorb nutrients. 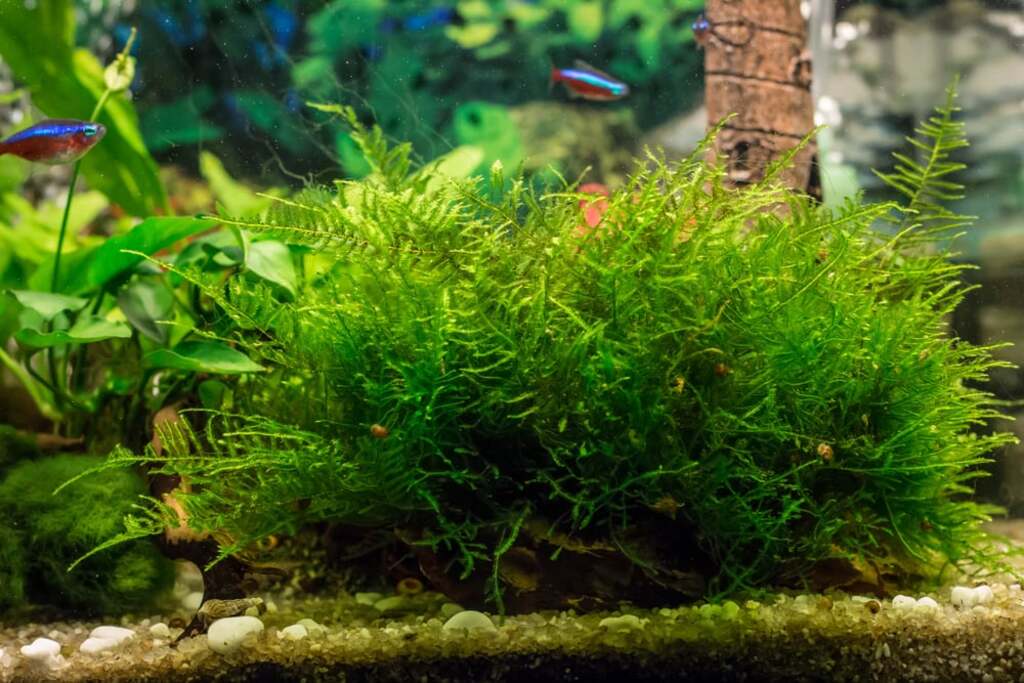 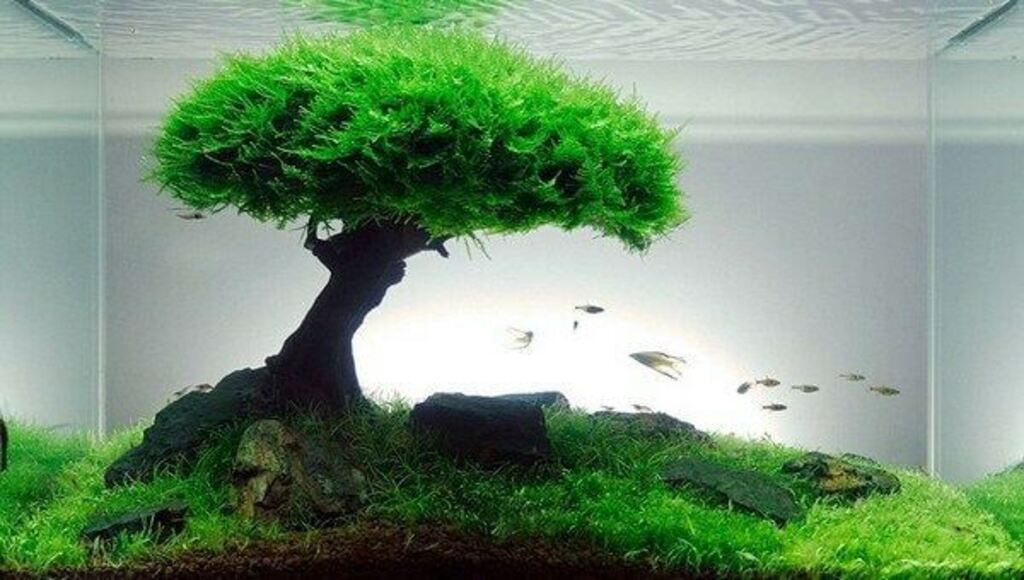 Java moss is popularly used as cover for sandy, rocky or other substrates used in a fish tank as it grows on any surface. It is also used to create beautiful moss walls by installing mesh and growing the java moss throughout. It adds to the life of the tank as it is a living wall.

Java moss is also used very commonly by fish breeders as a Java moss mat is a great option for scattering the eggs of fishes, which is commonly done by egg-scattering fish. The eggs in the mesh are protected from the scavengers and thus have a safe place to develop.

Aquarium Java moss as a floating aquatic plant can provide a great spawning site for spawning fishes. It also makes for a great cover for juvenile fishes and tiny fry. Mature Java moss for aquariums also makes a great support for the growth of food plants for newly hatched fry. This plant is an ideal first food for fishes and is known as Infusoria.

Java moss walls can be made using a plastic mesh or a stainless steel mesh by placing the moss between 2 pieces of the mesh and then tying them together. They can be grown in a mesh of various shapes to make your aquarium look beautiful and unique. Java moss for aquarium is also used to cover the unattractive tank equipment by turning them into something beautiful.

Fishes like bettas or gouramis that build bubble nests enjoy the clumps of floating Java moss. Java moss also acts as a hiding place for fishes when they want to be alone. They are commonly used in shrimp tanks as they make great hiding places for shrimps. 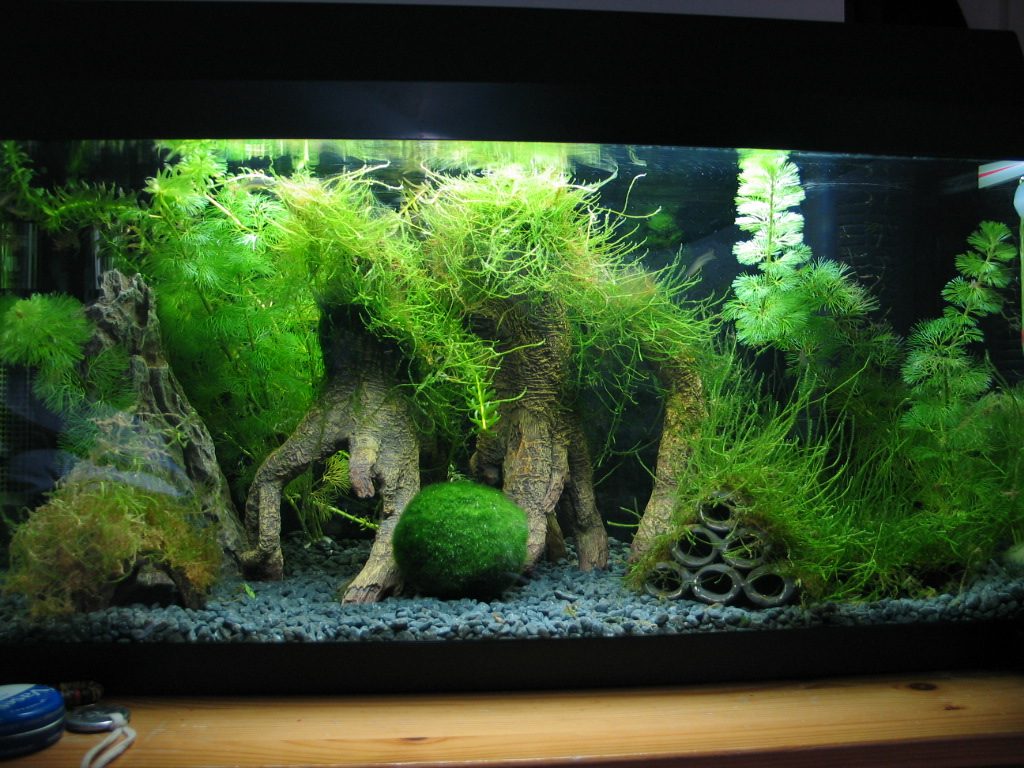 Java moss care is pretty easy when compared to a lot of other aquatic plants. It is hardy in nature and flourishes in almost all kinds of water but the ideal conditions must be considered to get the best quality moss in your aquarium.

Java moss aquariums can have varying qualities and intensities of light. It grows well in both high and low light but the moss that is grown in low light is different as compared to the one grown in high-intensity light. The low light plant is usually dark and lanky whereas the one grown in high lighting is denser and more compact in nature.

You might think that the addition of carbon dioxide and fertilizers speeds up the growth of the aquarium java moss but it isn’t really required as the moss grows pretty well even without these and it is compatible with any and every species of fish.

You can still occasionally provide liquid fertilizer if you feel the plant doesn’t seem to be in its best form and aid to the java moss care and maintenance.

Java moss at the base of the aquarium often collects tank debris which may look unattractive and even damage the plant if it continues for a long time. To get rid of the debris from your aquarium java moss, you can remove it and rinse it with plain tap water and place it back. It is quite sturdy andcleaning doesn’t damage the moss.

The only major problem encountered by the Taxiphyllum Barbieri is algae growth as it is almost irreversible once it begins to happen. Discarding the plant in such cases is the best choice to prevent the spread of algae to other plants.

Algae growth on Taxiphyllum Barbieri can be avoided by preventing exposure to excess light and keeping the water clean. When water isn’t changed regularly the nitrate and phosphate levels go up which encourages the growth of algae.

It can be left to grow wild or kept in shape by giving an occasional trim. It can be trimmed into a specific shape of your choice using a pair of scissors. Unnecessary touching and moving must be avoided.

Leaving the plant to grow freely without trimming can lead to issues as it has the capacity to take over your entire aquarium, clog filters, etc.

How to Grow Java Moss in an Aquarium 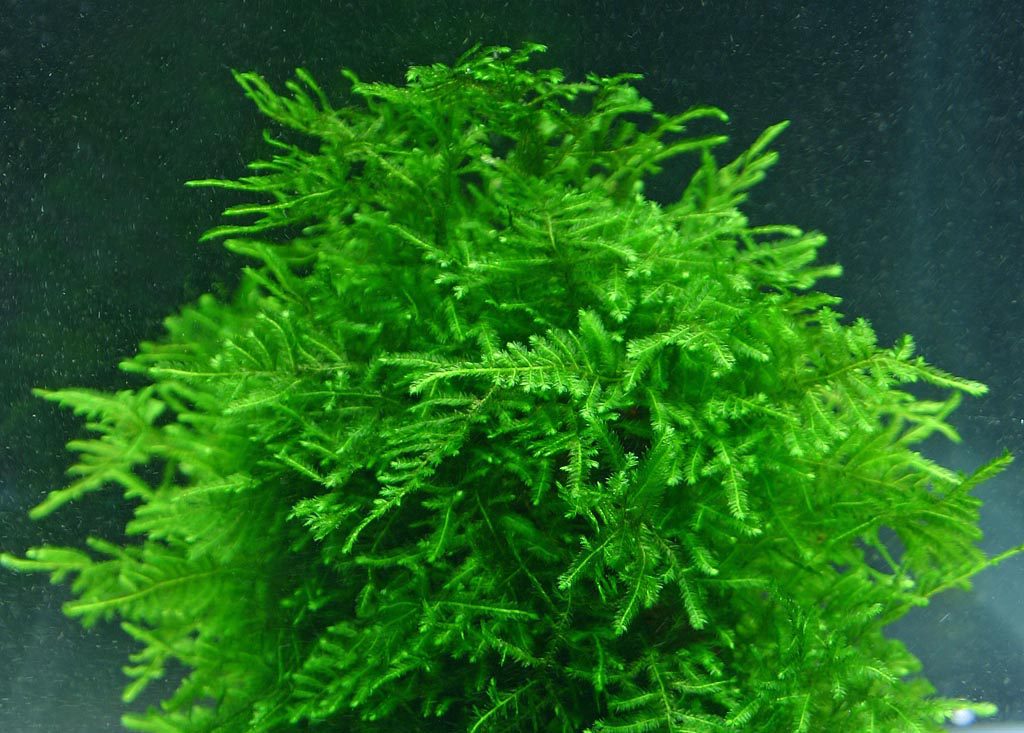 There are multiple ways by which you can grow java moss in your aquarium, the simplest being leaving a floating plant. You can also attach it to something if you want it to grow onto something.

You can cut a piece of one java moss and attach it somewhere else or leave it floating and it’ll continue to grow. Java moss grows at a slow to medium rate by division. It can take 3 to 4 weeks post-attachment to grow. It spreads vertically as well as horizontally as it grows.

Many people also use super glue to attach the java moss to something of their choice and it seems to work perfectly. One can also use the moss to create java moss trees in the aquarium using a vertical piece of driftwood. Using a piece of wood that gives out branches is more preferred.

Is java moss or Taxiphyllum Barbieri a good option as an aquatic plant to add to your aquarium? The answer is, yes. It grows anywhere and requires minimal effort. It is also a great choice for breeding tanks as it is suitable for most fish.

Even when it comes to territorial fishes, the java moss in the aquarium can be used as a territorial line to separate one type of fish from another. Their easy to propagate and affordable nature adds to the list of benefits. It is an ideal choice for beginner aquarists.

For more information on pet care, breeds, or pet foods, visit PetsNurturing.
For quick pet tips and adorable pictures, follow us on our Instagram page pets_nurturing.