All You Need to Know About White Cloud Mountain Minnow Fish

There are various topical fishes well-known for their natural beauty and one of them is white cloud mountain minnow fish. From the rivers of China, mountain minnow is a beautiful little fish that you can keep in your tank if you are a beginner in petting fishes. Its lovely scales reflect a wonderful array of colors. You can care for them very easily as they are not too messy and friendly when kept in community tanks.

If you need an alternative to higher maintenance tropical fish than white cloud mountain minnow is the best. Let us know in detail what are their specifications, how to breed them, which fishes will go along with them, and so on. We will cover the topics one by one starting with a little introduction about the minnow fish.

White cloud minnows belong to the Cyprinid family. The family includes popular fishes like goldfish, zebra danios, and tiger barbs. They are ancient to china and Vietnam from the year 1932. They were known as poor man’s neon tetra in the 1960s and ’70s due to similar patterns and cheap prices.

White cloud minnows are renown for their peaceful disposition, hardiness, and eager appetites. Aquarists love to pet fish and can even live in bowls along with Bettas fish and other tolerant fish of cool and unfilter waters.

Due to its geographic origin, the habitat of the fish has been negatively impact. They were not seen in nature for twenty years from the year 1980. This leads to the belief that they have become extinct.

In the coastal province of Hainan and Guangdong island in China, a small number of this fish population was discovered in some isolated locations. It is considered an endangered species in China as it is very rarely found in the wild. The white cloud mountain sold in the aquarium trade is all captive-bred. 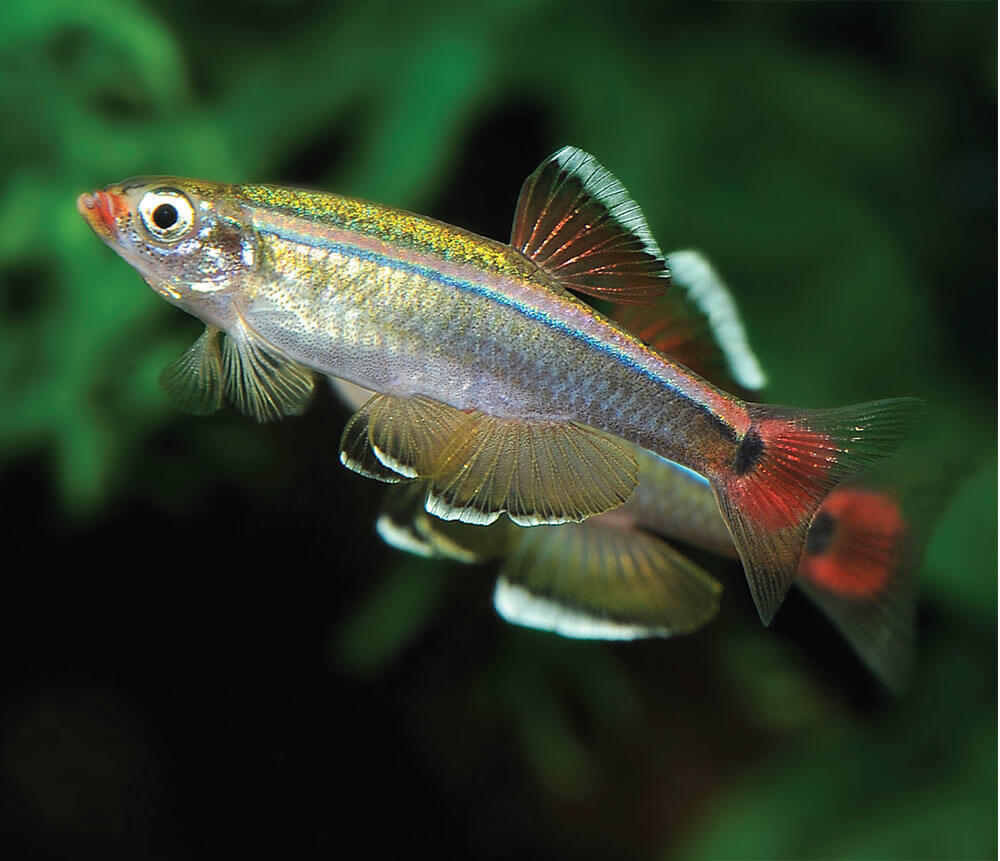 White cloud mountain minnow is a small fish with a height of only 1.5 inches maximum. The male species are more colorful than the female species. They usually dwell in the top of the middle of the tank and are not seen in the bottom region of the tank.

They have shapes like darts with slim streamlined bodies and pointed snouts. The ventral and dorsal fins are triangular and point towards the back of their bodies. They have a mouth slant upwards and the lower jaw protruding slightly.

The commonly found mountain minnow features green and silver scales with black and iridescent pink stripes along the lateral lines. They have caudal fins and red-tipped snouts with the base of their tail having a black dot. Their ventral and dorsal fins are red with white tips.

Some of the common varieties of white cloud mountain minnow include 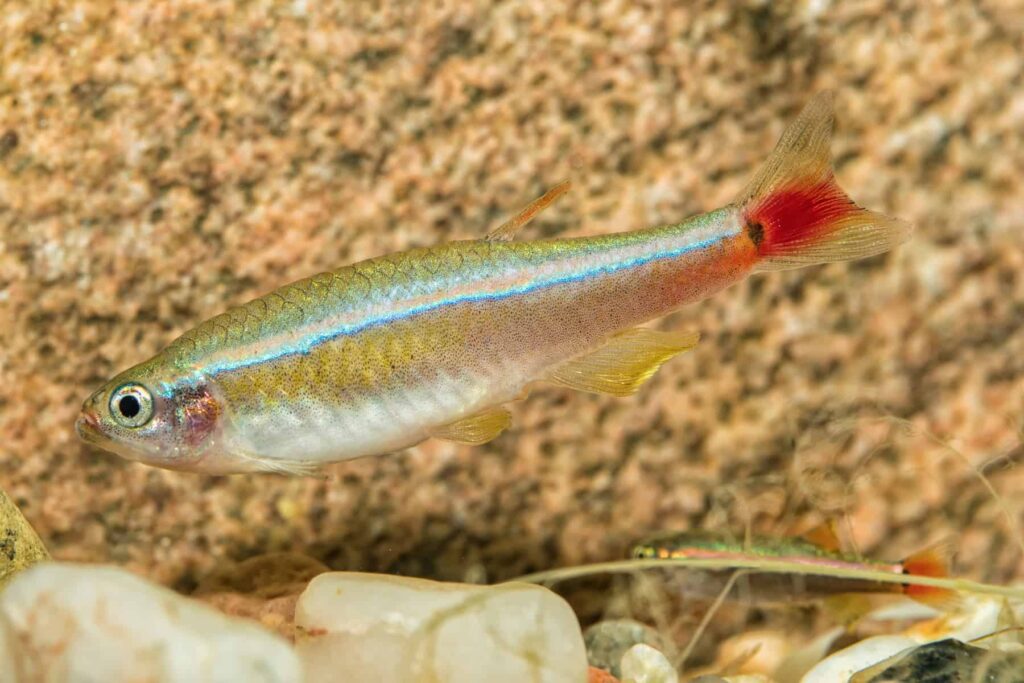 White cloud mountain minnow is quiet fish apart from the mating season. The male fish becomes territorial and aggressive when it comes to competing for mates. Most of the time they are co-operative and will feed and swim in coordinates groups.

They are typically in schools of at least 5 to 6 fishes. The larger the group the less shy the fish will be. So, they are a great community fish as they do not compete or harass their tank mates. They may display bright colors when they are at the middle level of the tanks. They usually like the rocks and plants in the tank for extra shelter but do not mistake this for their hiding nature.

In the wild, these fishes dwell in the streams of white clouds (Guangzhou’s Baiyun) Mountain. The streams are acidic in nature with a flow ranging from low to moderate.

They are hardy fish that can tolerate a good range of temperature and the fluctuations in water quality. For their survival, the ideal temperature is between 64°F to 72°F. it is also observed that they can survive in temperatures of 41°F.

The streams have a very rocky surface. With low flowing area large boulders and cobbles mix in with a fine gravel layer. They live in areas with algae and aquatic plants. They take shelter in underwater mosses, weeds, and floating plants. 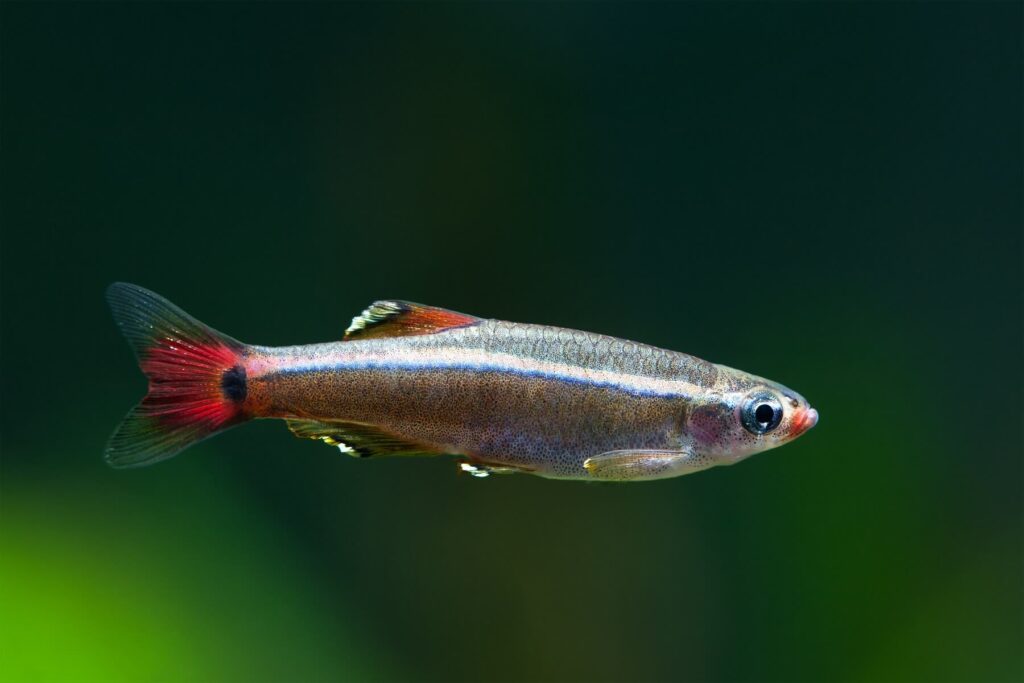 As a small fish, it can comfortably live in tanks of size approximately 5 gallons. They must be kept in a group of at least 6 fishes. Tank above 10 gallons will provide the aquarists more room to work while giving space for other tankmates.

If having an aquarium with large size of 29-30 gallons it is recommended to school fish in a group of 10. No matter what the tank size minnow fish are peaceful and will not harass other tank mates.

The pH level of the water for the white cloud minnow must be close to 7.0 with 6.0 to 8.0 being the ideal pH level. In nature, they live in a highly oxygenated temperature stream. They can only tolerate cooler temperatures as they are a subtropical fish. High temperatures will wash out their colors while the cooler temperature will bring out various beautiful colors in male species.

The family of cyprinids is known to uproot and munch plants however white cloud minnows are plant-friendly as they are micro predators and like planktons and invertebrates. They tend to nibble on softer plants only when are they are hungry and if the aquarium accelerates their metabolism. 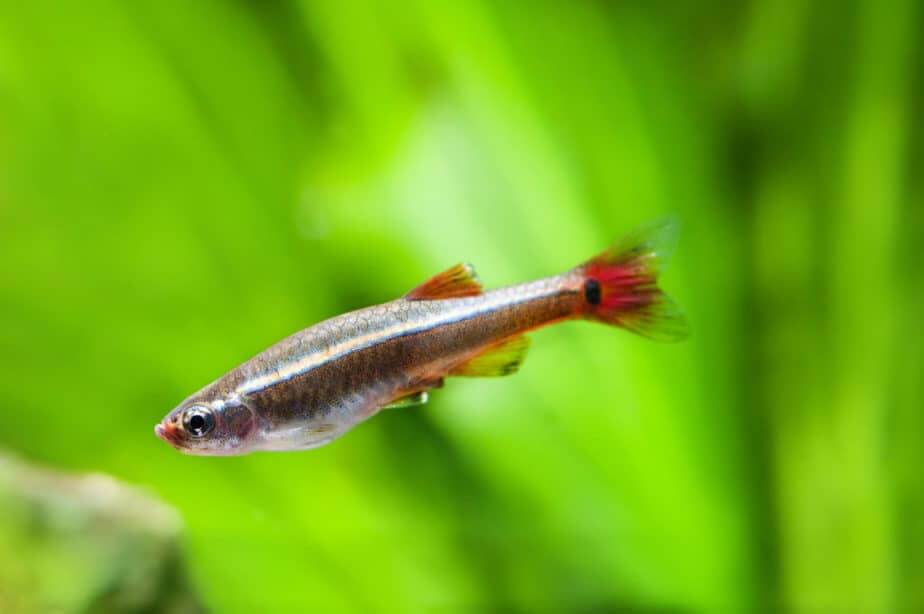 As white clouds being community-friendly, they can be kept with many of the aquarium fishes considering their personality. Considering the cooler water conditions the list of many fishes gets narrow. When kept in hotter water they may survive but lose their disease resistance and the life span get shorter with their metabolism going very high.

Here is the list of some of the good tank mates for white cloud mountain as they are a good tolerant of cool water.

The aquarium trade white cloud minnows are all the captive-bred. From start, they are been train for flakes, liquid fry preparations, pellets, and other such prepare foods. For good reproduction and better color, you can feed them invertebrates like bloodworms, brine shrimp nauplii, daphnia, and tubifex worms.

These invertebrates are available in frozen form in all most all pet stores and are easily raid as live food. On some occasions, you can also feed them blanch spinach, spirulina flakes, and other vegetables. 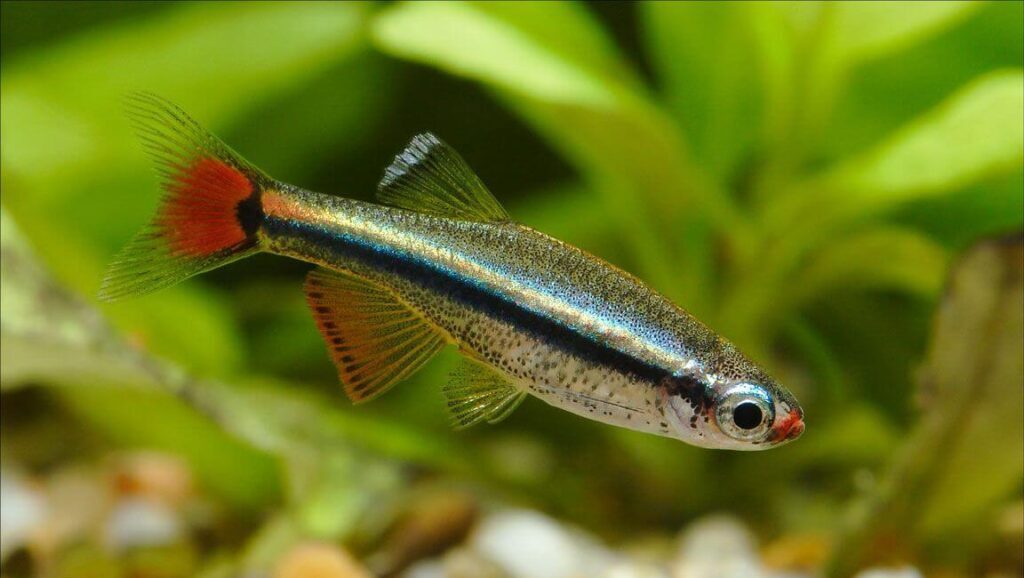 It is easy to breed white cloud fish as they have a long breeding season that lasts from March to October. In a group with the right balance of males and females, they pair off well and spawn several times throughout the year.

Male species at the time of mating will behave aggressively to dominate each other. This is the only time you will see them act like bullies. They pair off once the female selects the male. Separate breeding can be done in a small tank with moss and aquatic plants. Make sure the temperature of the tank is 64°F to 72°F.

The pair must be fed three feedings daily of live invertebrates. Males will have brighter and flashier colors when they are ready to mate. Contrary, females will grow large and round. Females will scatter the plants around the mosses and plants when she is ready. After they lay eggs the parents must be remove to prevent egg cannibalism. The eggs hatch in after 2 days.

Infusoria base food must be fed to the new larvae after they lose their yolk sacs. Micro-worms and larval brine shrimp are given once they grow big.

If you are the first timekeeper of the aquarium, the white cloud mountain minnow is the most suitable fish. Caring and breeding for them are also easy as they get along well in the community tank. They are good at nature and will not eat your plants.

They have a personality and color of a typical tropical fish and can tolerate various environmental conditions. If you are keen and excite to build your new aquarium, White clouds can make your job much easier. For more information, visit Petsnurturing.