Alligator Vs Crocodile: Key Differences & Who Wins in a Fight

Some crocodiles and human videos on social media are going really viral these days. You might have seen these short videos on Instagram or on Tiktok. In one of the videos, where a man is seen dancing with a crocodile, while in another video, a man is trying to save his best friend from a crocodile in the water. He jumped on the crocodile just to save his friend’s life. Honestly, he is a keeper, right? After all, it’s hard to find a friend like him. However, don’t try this with your friends and family members because there are high chances that the crocodile is not that friendly, or maybe he is not even a crocodile. Yes, there are a lot of animals that live in water, and one of them is an alligator!

Now you might be thinking, isn’t crocodile another name for alligators? Aren’t these two reptiles (Alligator vs. Crocodile) the same? No, you’re absolutely incorrect!

Crocodiles and alligators are completely two different species as they belong to distinct biological families! 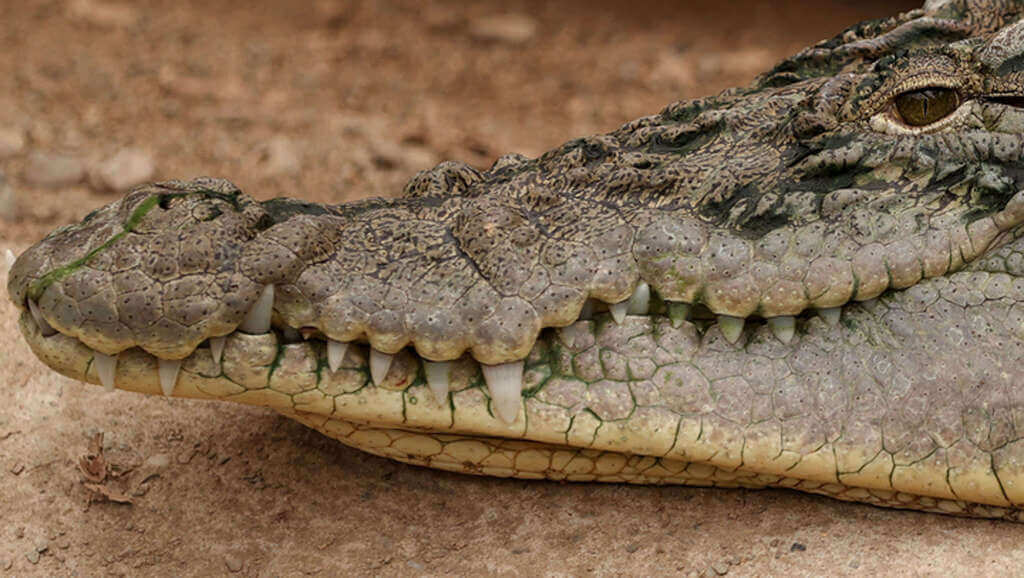 Don’t worry; you’re probably not alone! Many people are aware of the fact that there is actually a huge difference between alligators and crocodiles. Due to this, people mistakenly use both terms interchangeably whenever they see or describe any large water-dwelling lizard with big teeth.

There are also some similarities, like they belong to the same phylogenetic order and both are large reptiles with lizard-like bodies, but still, both reptiles don’t look or behave the same.

Are you still confused between these two water predators? Keep reading on!

Today in this blog, we’re going to tell you the main key differences between Alligator vs. Crocodile. From their physical appearance and looks to their eating habits and behavior, there are many ways by which you can easily differentiate the two.

So let’s begin with an overview of crocodiles vs. alligators.

Comparison Between Crocodile vs Alligator 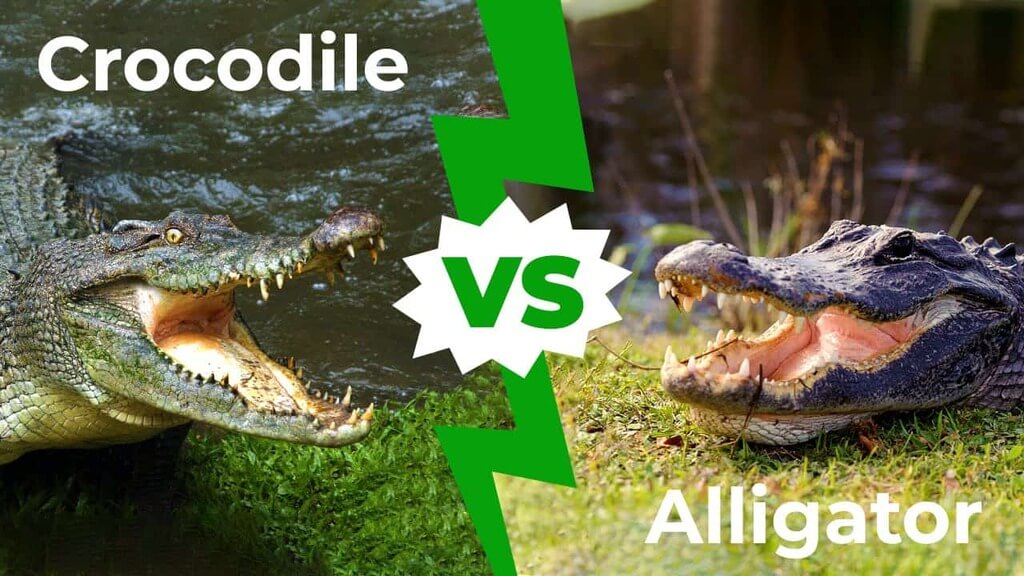 Here is the complete comparison table of croc vs alligator:

Do you know which is the largest and smallest crocodilian species on this planet?

The saltwater crocodile, Crocodylus porosus, is the largest species of crocodilian present in this world. It measures about 6 m (20 ft.). On the other hand, the smallest one is the Cuvier’s dwarf caiman which is only about 1.6 m (5.2 ft.).

Now let’s move on to the crocodile vs alligator differences.

7 Key Differences Between Alligators and Crocodiles 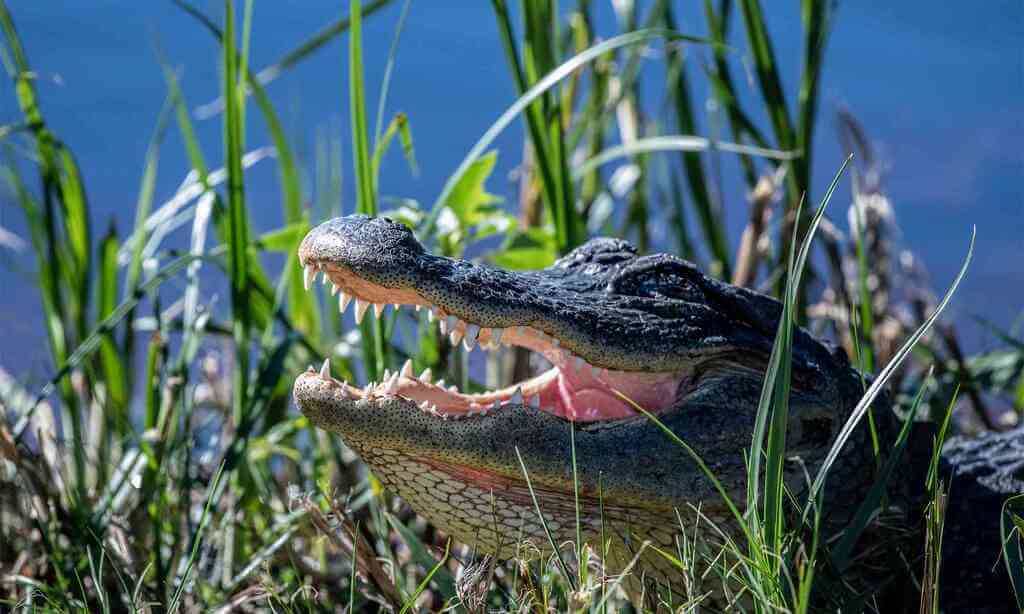 Alligators and crocodiles are different in themselves as they have different sizes, colors, and shapes of their snout. That’s why these two species can’t come under one category.

There are many ways from which anyone can easily identify a crocodile and alligator. Below is the list of differences between alligator and crocodile traits that can point out their uniqueness clearly:

Once you understand the differences well, you can easily identify between these two reptiles. Let’s explore each difference in detail for a better understanding. 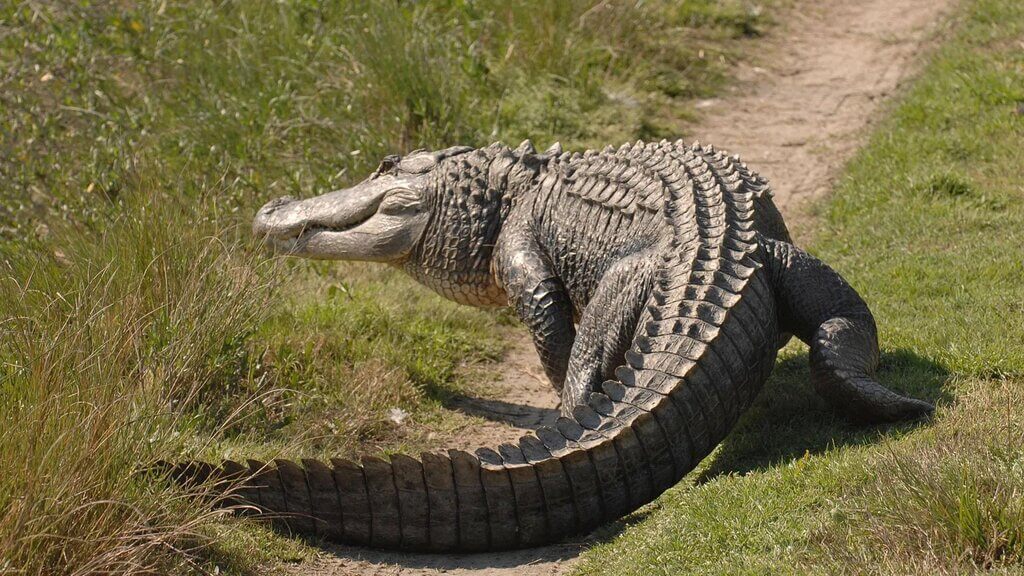 The first difference is the location. You have to know where alligators and crocodiles live.

Both have different and unique ranges and habitats that they prefer to live in. why? Crocodiles have special glands in their tongues that help them excrete excess salt from their bodies. So they can easily live in salt waters.

On the other hand, alligators don’t work this way; that’s why they usually stick to freshwater habitats.

Here are the locations of both reptiles:

Do you know that there are more alligators in America than crocodiles? Yes, you’ll be surprised to know that over 3 million alligators but only less than 2,000 crocodiles are present in the US.

If you want to see both reptiles living in the same place, you must visit Florida! That’s the only place where crocodiles and alligators live side by side. 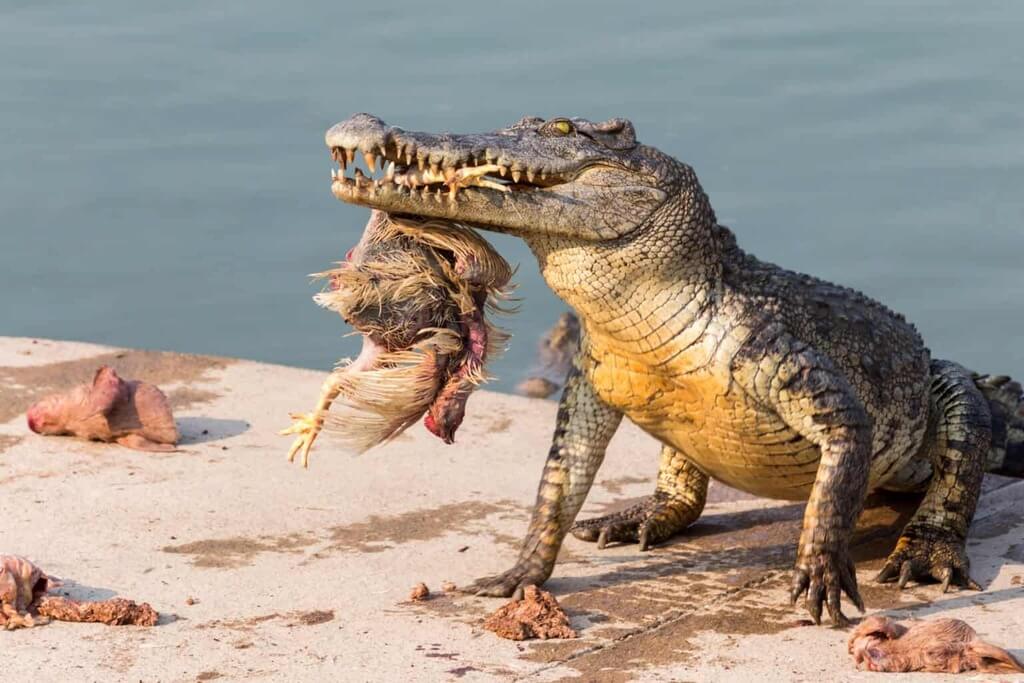 Do Alligators and Crocodiles eat the same food?

Both reptiles usually eat fish, birds, turtles, and various mammals. Alligators and crocodiles are apex predators; that’s why they only consume those animals for their source of nutrition.

Here is a list of animals on which these two capable hunters can prey:

You can see that both reptiles have different diets. As compared to the alligator, the crocodile has more potential prey. That’s because crocodiles live in and around saltwater.

Another interesting thing about alligators and crocodiles is that they also eat fruits apart from animals. 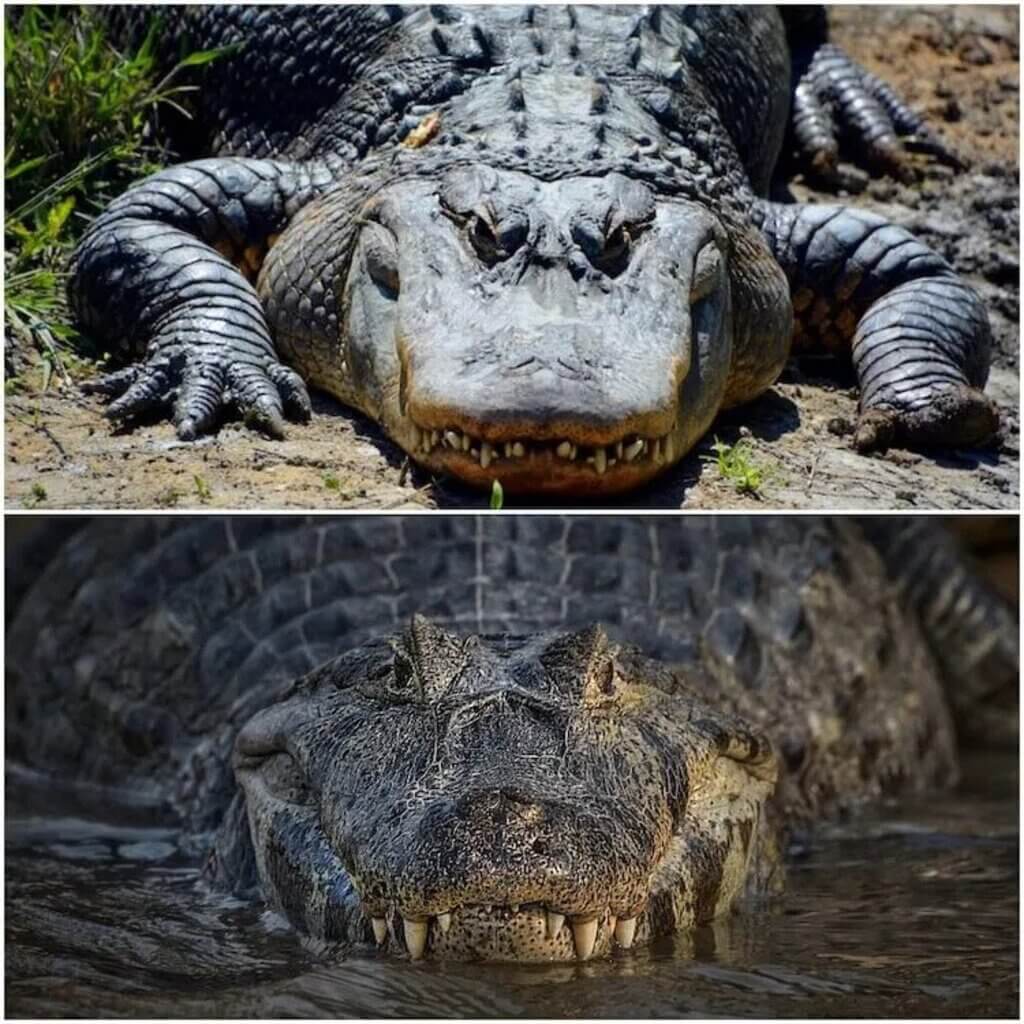 If you know the difference, you can easily tell the difference between alligator and crocodile, even from a distance. Look at the shape of the snout and the visibility of the teeth.

Crocodiles have longer and more pointed “V”-shaped noses, whereas alligators have a wide “U”-shaped, a rounded snout that looks like a shovel.

Apart from the snout, they also have different jaw shapes and teeth. You can notice this when their mouths are closed. The upper jaw of an alligator is wider than the lower jaw, and that’s why you can’t see its teeth at all.

On the other hand, you can easily see the crocodile’s bottom teeth even when its jaw is closed. Apart from their grin smile, the fourth tooth on each side of the lower jaw always sticks up over the upper lip.

Here are some more comparisons between Crocodile vs Alligator: 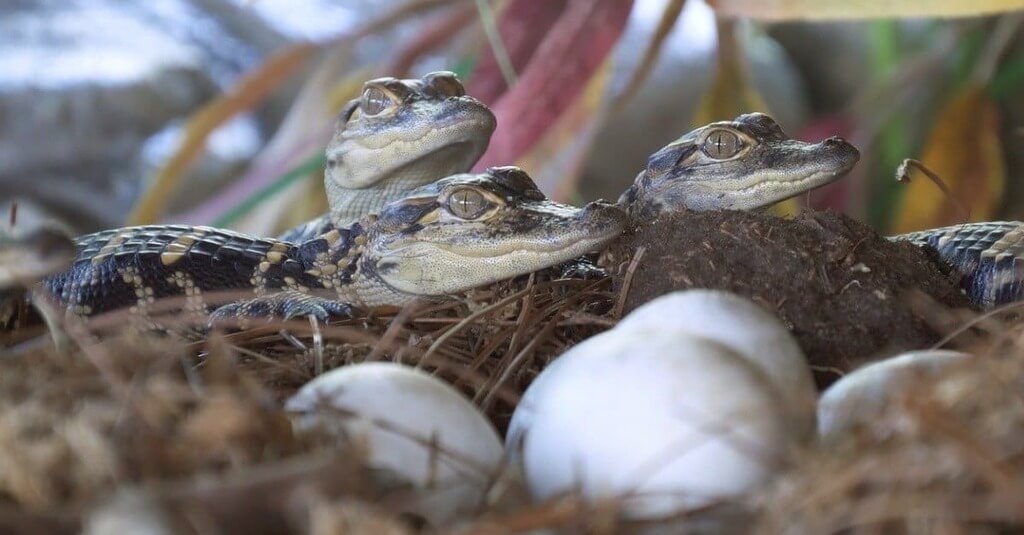 As compared to alligators, crocodiles live longer! However, both water creatures have long lifespans.

On average, alligators have a lifespan of about 30 to 60 years. At the same time, the lifespan of a crocodile is between 70-100 years. These animals live for a long period of time and grow into monstrous sizes. That’s why crocodiles are the staple predators! 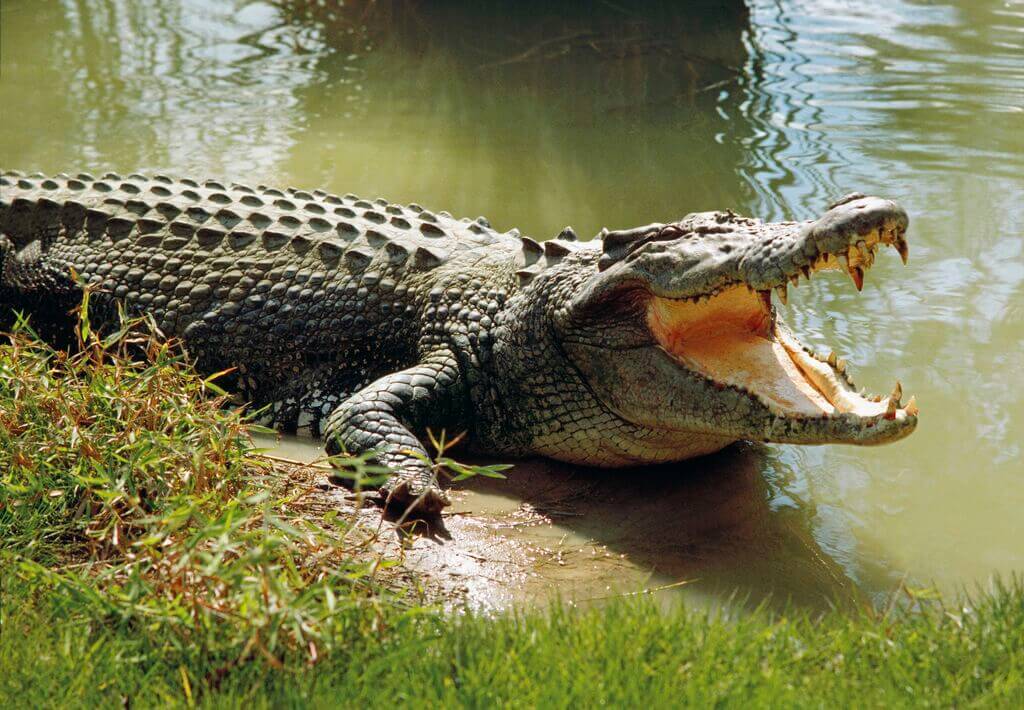 Crocodiles have lighter colors than alligators. They can be a light tan or olive green, or brown color. On the other hand, alligators are usually dark blackish-grey in color. Also, the shade of the alligator’s skin depends on the water he is living in. The algae in the water make them greener, and the tannic acid from overhanging trees will make them darker. 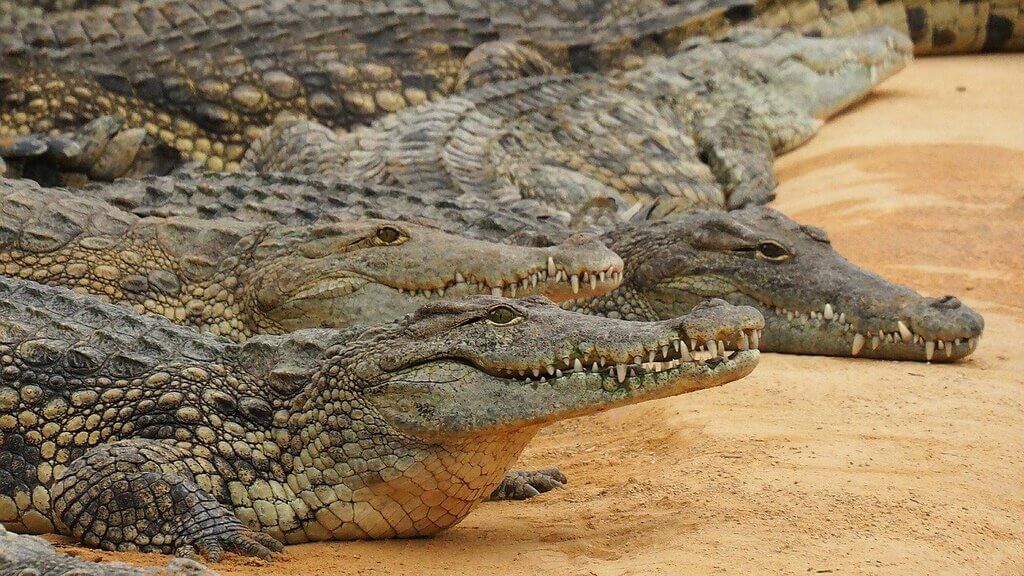 Both creatures have sense organs on their skin. These organs are in the form of small pits called integumentary sensory organs (ISOs). They can easily sense and locate the prey with the help of these organs. These ISOs look like small dots are present all over the crocodile’s body but only around an alligator’s mouth. 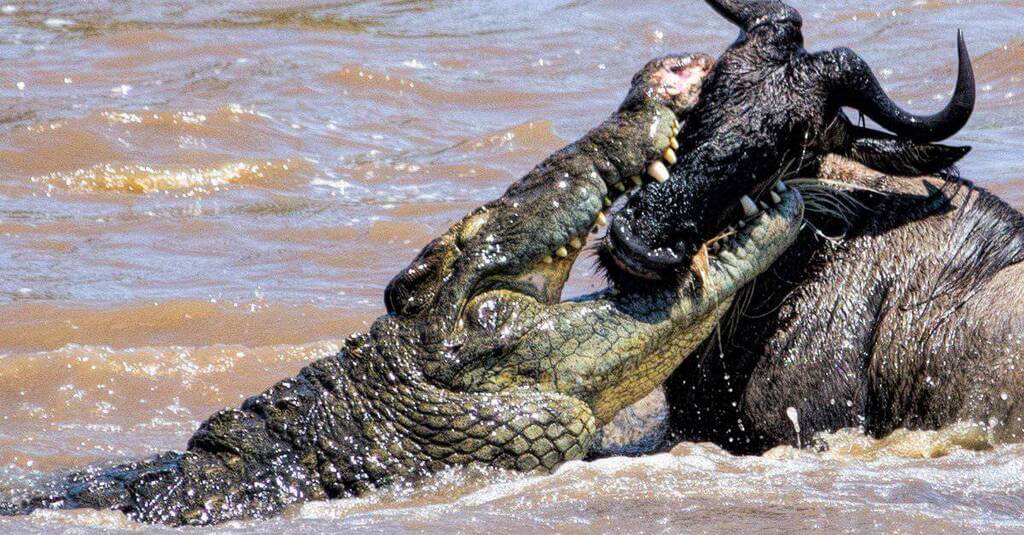 Yes, both alligators and crocodiles are extremely apex predators, but they also have external threats. Yes. It’s hard to believe as they seem like the most dangerous water reptiles.

Baby and young alligators are vulnerable, and they have a threat from the following creatures:

Similarly, the baby and young crocodiles are also preyed upon by the following enemies:

However, no matter how dangerous these creatures are and how they harm their eggs and babies, humans are still the most significant predator of adult crocodiles and alligators.

People killed these animals for various reasons, including meat, fear, and habitat destruction. That’s why humans are the biggest threat to both alligators and crocodiles.

Crocodile vs Alligator: Who Wins in a Fight? 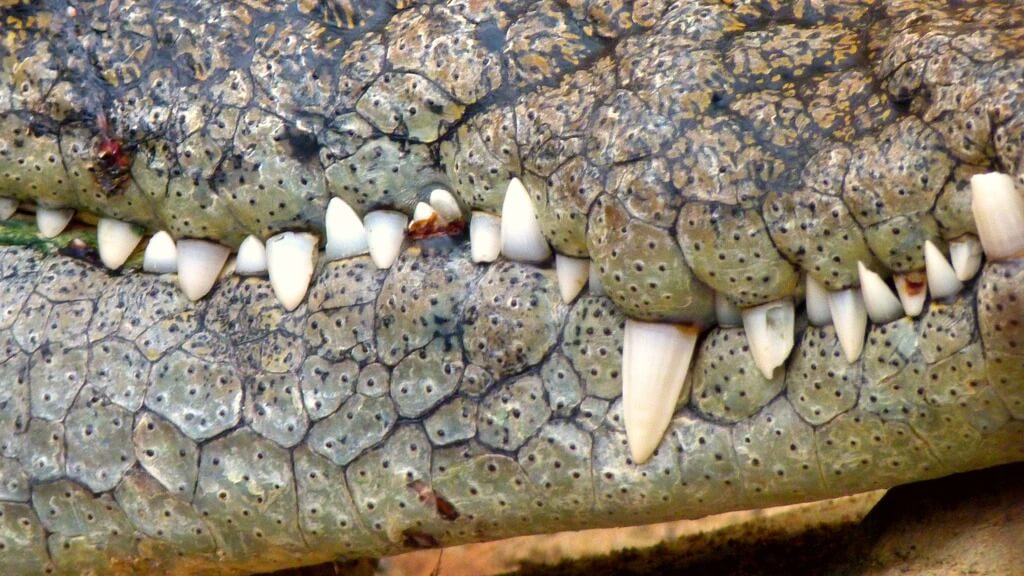 So the question is, who is the stronger, alligator or crocodile?

To get this answer, first, you have to look into factors of crocodiles vs alligators like aggression, proximity to humans, population, crocodile vs alligator size, and strength of both reptiles.

Crocodiles are aggressive and larger in size and weight as compared to alligators. Alligators kill humans rarely, like one person per year in the United States. On the other hand, crocodiles are more dangerous than alligators because they kill roughly 1,000 people per year in Africa alone. So, the answer is pretty clear: crocodiles win over an alligator.

So this is all about the differences between alligators vs Crocodiles. After reading this blog, now you can easily tell the difference between an alligator and a crocodile. However, while visiting any of the creatures, maintain distance and under the supervision of the experts.

I hope this in-depth guide on Alligator vs. Crocodile has provided you with all the information you need. So, if you find this blog informative and helpful, please share it with your friends and family.