You might take to recognize some dog breeds, but when it’s a German shepherd breed, you can immediately know whether a dog is a German Shepherd or not! And in this specific breed, black is considered rare and popular. You’ll be surprised to know that AKC has recognized the German Shepherd breed as the world’s 2nd most popular dog breed in the United States.

If you have ever owned a German Shepherd or have seen this dog in your neighborhood, you’ll know how these canines are so easily recognizable and how they look exactly.

You may have seen these canines with black and tan coat color, as is pretty common but seeing fully black German Shepherds is rare because they’re still not recognized by most major kennel clubs.

The black coloration is unique and rare, but it does not result from cross-breeding. In fact, the gene of the black fur and coats is actually carried by purebred German Shepherds.

Today in this blog, we’ll tell you everything about the black German Shepherd. We’re going to cover every important information about this dog breed, such as:

Apart from this, we’ve also mentioned where to adopt them and what are some things you should keep in mind as a first-time pet owner. 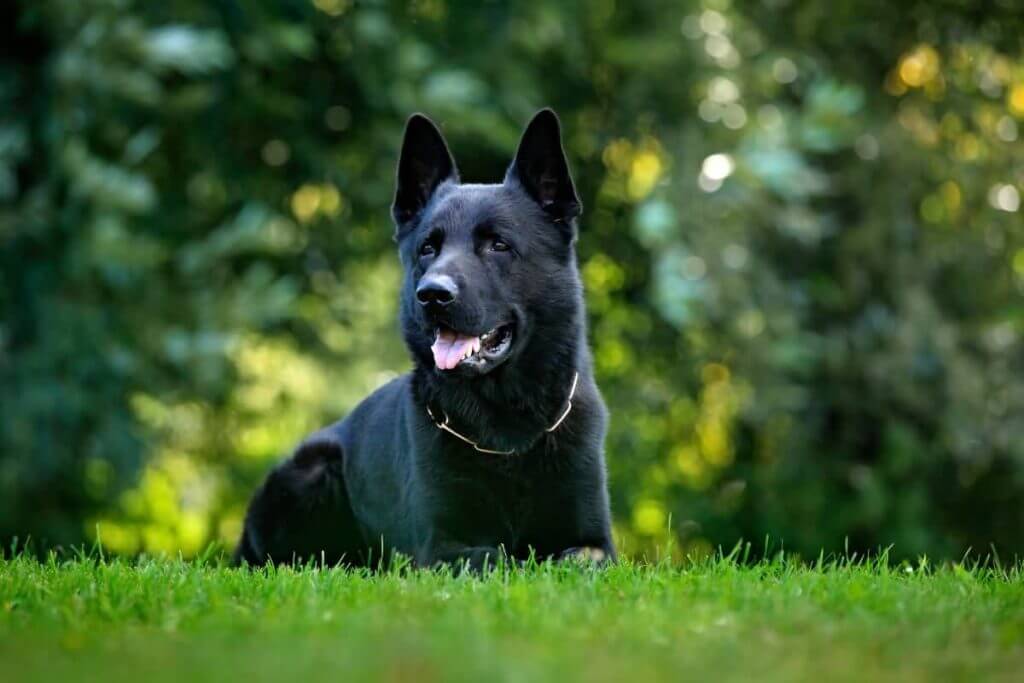 Just like other colors of German Shepherds, the black GReman Shepherd are also friendly, loyal, playful, and caring. These canines are highly active and like to play outdoor activities like walking and running with their owners. When trained properly, these adorable dogs also behave well with children and other pets. you can also check german shepherd names.

Here is the summary table of the german shepherd black color: 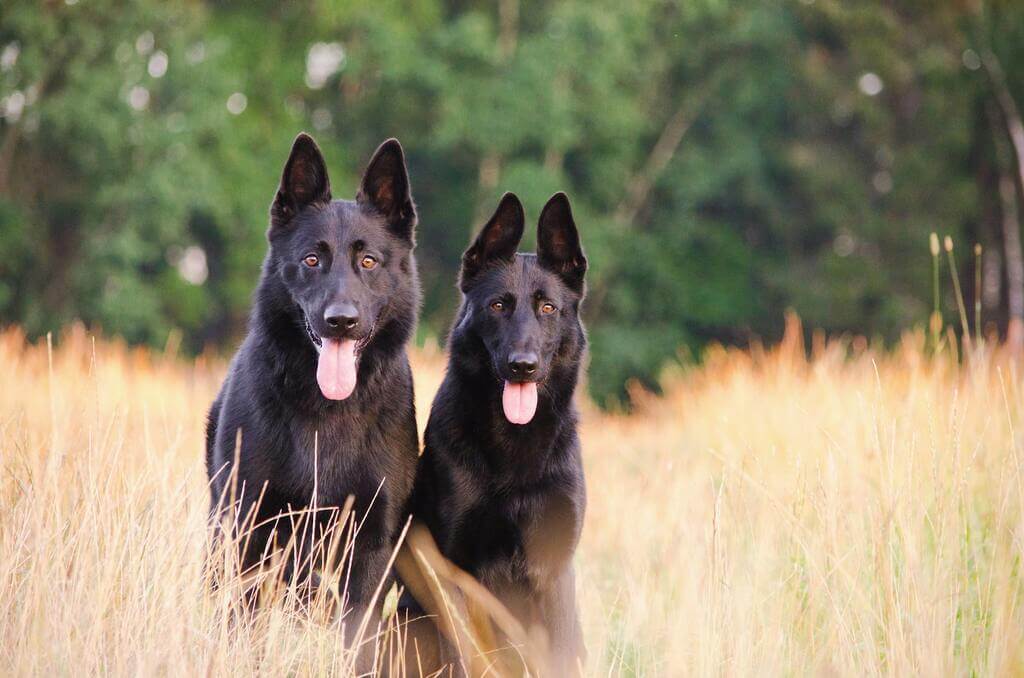 As you may have already guessed, Black German Shepherds are quite similar to other German Shepherds. The only major difference is the color of their coat. A full-grown black german shepherd is about 65 to 95 pounds and has a height of 26 inches.

Here is the size chart of the black German Shepherd:

These dogs usually have dark-colored eyes, but some of them also have blue-colored eyes. This might be a sign that that particular dog has other breeds in his pedigree, such as Huskies. These canines are lean but strong bodies with floppy ears. 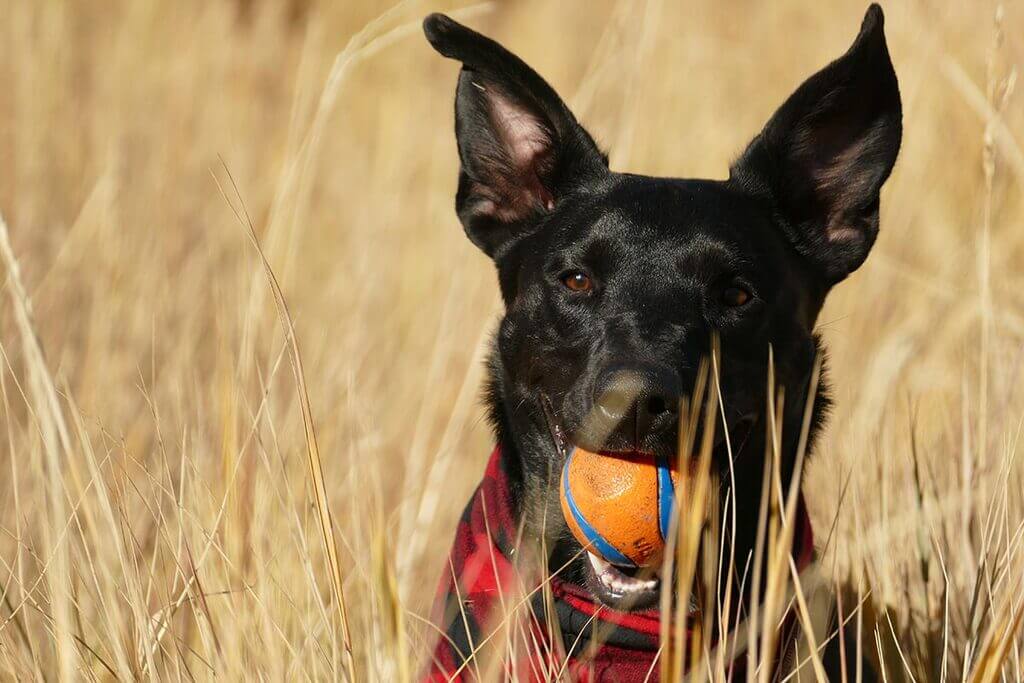 Now, let’s learn about the history and origin of the German shepherd dogs. This breed was first discovered by Von Stephanitz. He spotted a German Shepherd at a dog show, and after seeing this dog, he thought that this dog breed would be perfect for a working dog. So, he decided to adopt one of these canines and created the “Verein für Deutsche Schäferhunde,” the Society for the German Shepherd Dog.

He named them Horand and bred them alongside other canines with similar physiques and overall appearances. It is believed that the first German Shepherd appeared in the US around 1906, and later in 1908, they got recognition from the AKC. 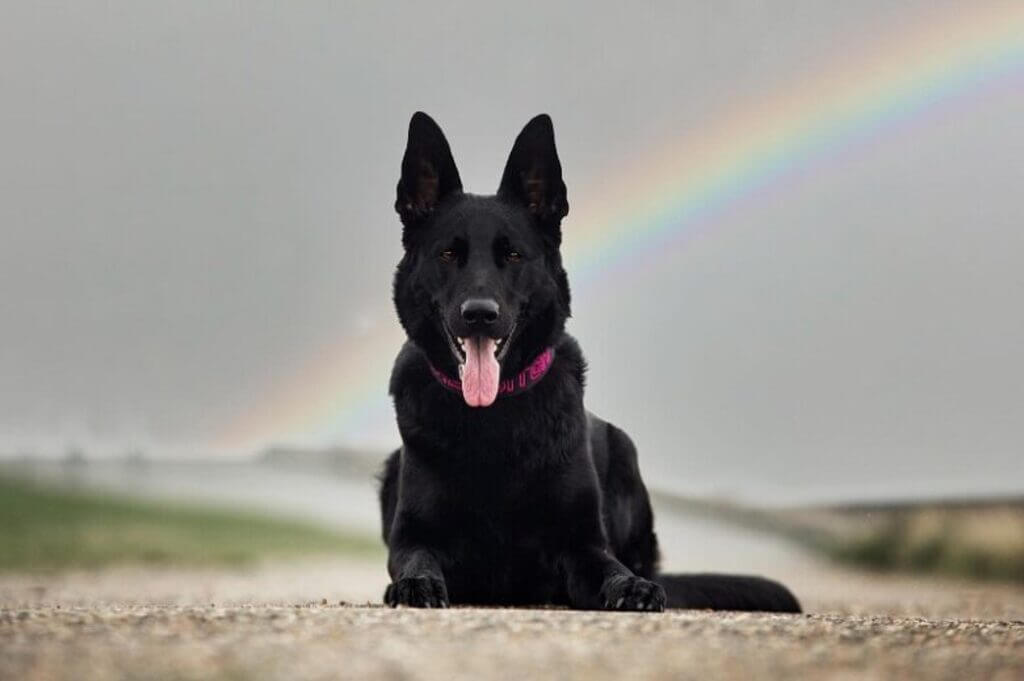 Black German shepherds are known not only for their unique coat color but also for their loyal and protective nature. These canines have stable and courageous personalities, which is one of the biggest reasons people prefer this dog breed.

A black shepherd is a confident, fearlessly loyal dog who is also a true companion and will stand next to you in any situation. This is why they are also used as guard dogs and disability assistance dogs.

If you train your black german shepherd dog well, they will be good with children, elders, and other pets. They can also keep a watchful eye on your baby when they’re playing or sleeping.

Training and Exercise Needs of a Black German Shepherd 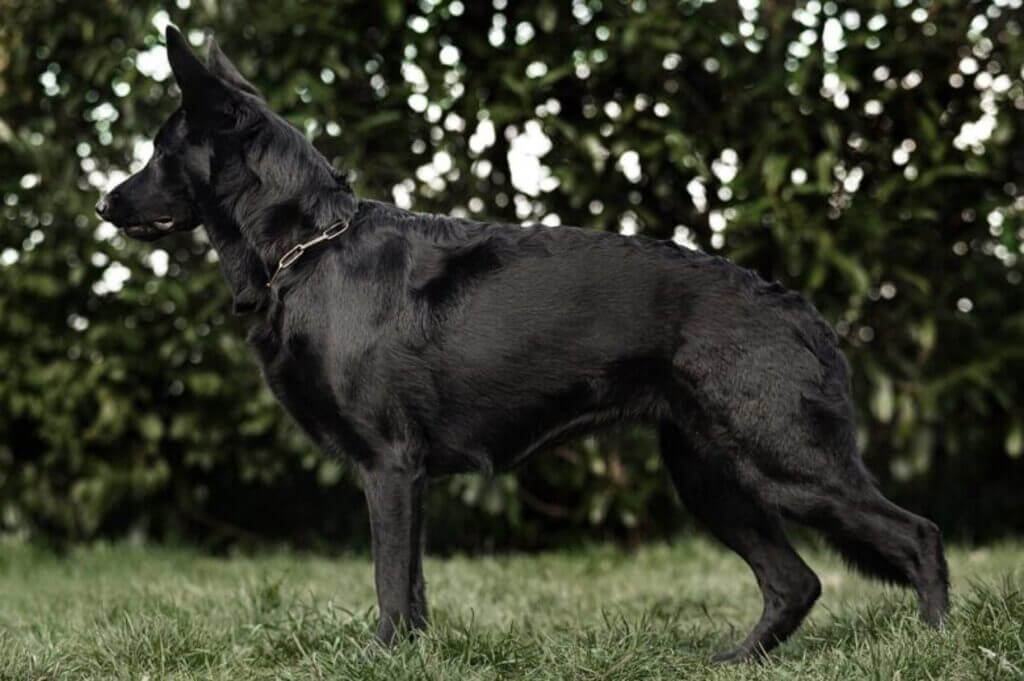 As we already mentioned, this dog breed is highly smart and intelligent. Thus, black german shepherds are easy to train. However, you should start training them at an early age so that they can learn things fast. Try to include training sessions with positive reinforcement, routine work, and rewards.

Also, don’t forget to tell them they’re a good boy/girl after each session and that they’re doing well. This will make them happy, and they will try to cooperate with you in the training sessions. Also, socialize them with young kids and elders and introduce them to various types of noises and machines. This will help black sable german shepherds to understand their surroundings.

For exercise, these canines need daily exercise. These highly active and energetic dogs need to do activities that burn down their calories.

A black German Shepherd needs 40-60 minutes of exercise per day.

These dogs also love hiking and swimming, and many other outdoor activities. These dogs will love to try different activities and games, from playing ball games in the yard to climbing mountains with you. 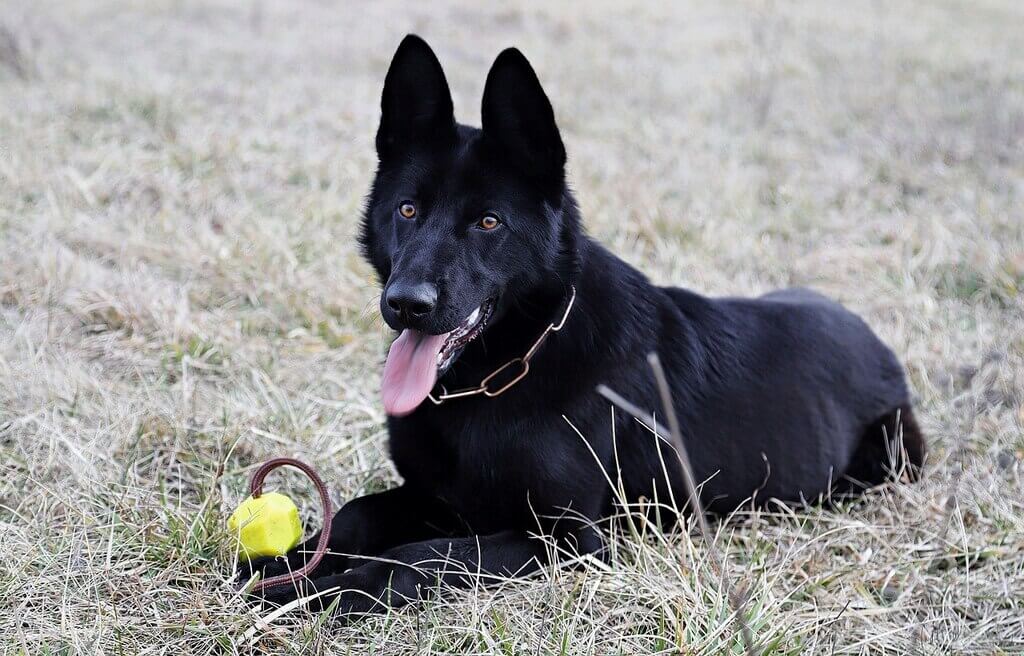 The bigger the dog, the more food he will need!

So, black german shepherds actually do come in the bigger sized dog category, so you have to feed them the appropriate amount of food per day. You should give your pup at least 4 meals a day. 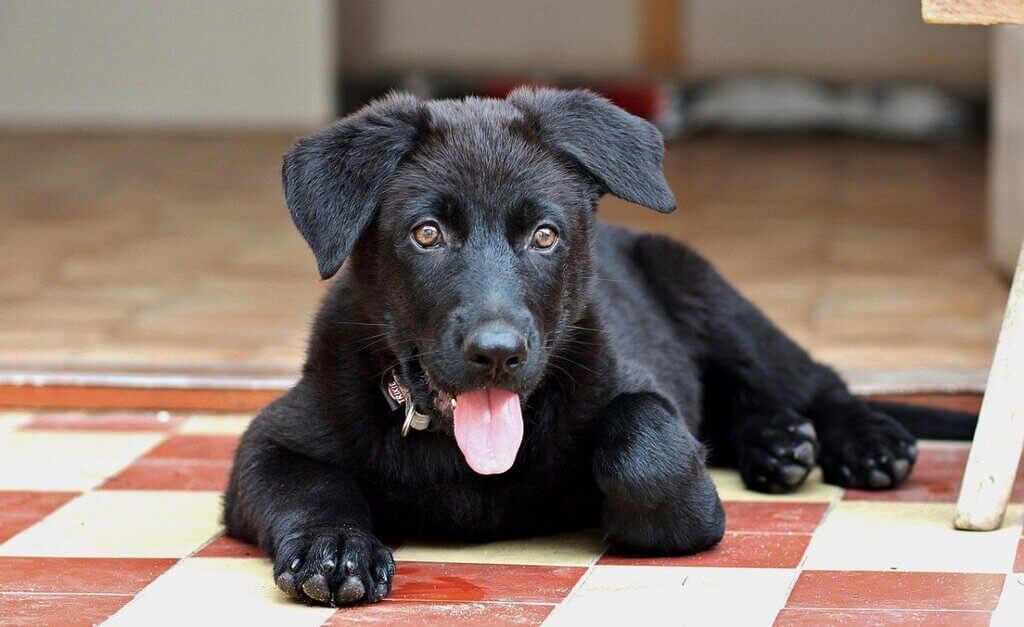 The average lifespan of a black german shepherd is 9 to 13 years.

It’s sad that dogs are not immortal, and they can’t live with us for a long time. But the good thing is that even though the period is short, they give us so much joy, happiness, and love.

Black german shepherds also suffer from many health problems, such as:

This is why taking your puppy to the vet regularly is important to avoid any potentially serious health issues. 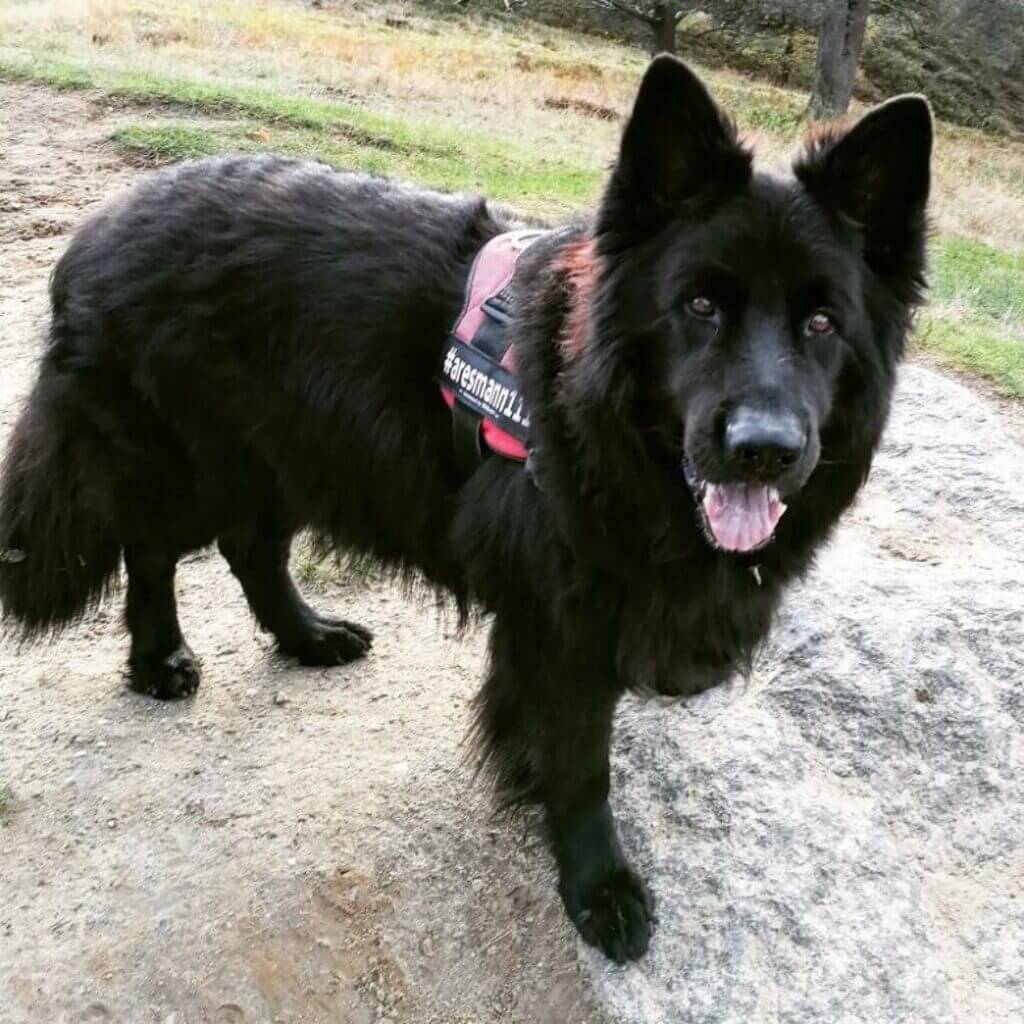 If you need a low-maintenance dog, get a medium-coated black german shepherd. That’s because long coats mean more grooming and more shedding. For medium coats, daily brushing is not required.

However, if your pup has a double coat, you have to groom them daily, and they also shed a lot. You can keep hair shedding under control by using a deshedding tool for your dog. Apart from this, you can also use anti-shed shampoos to keep your dog’s shedding to a minimal amount.

These dogs usually shed in the shedding season, which is spring and fall. So be ready to vacuum your home more often in these two seasons!

Apart from this, take your dog to the professional grooming center at least 2 times a year. 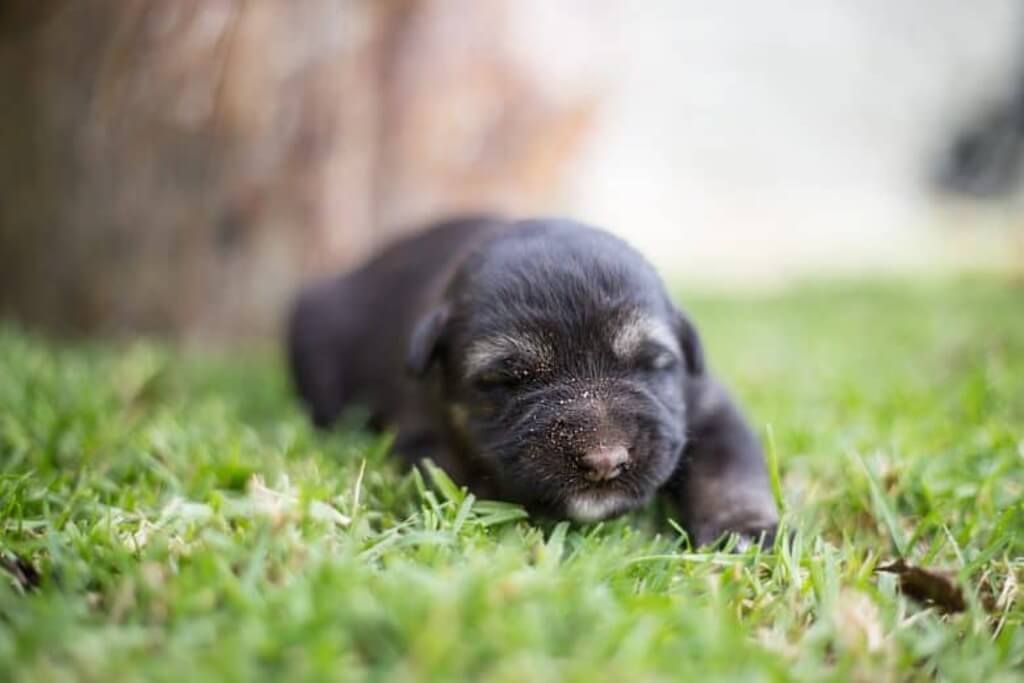 So if you want to adopt a puppy, you have to look for specific centers and places that are specialized in breeding black german shepherds.

The black color coat is not as common as the usual colors like the tan and black and tan mix. So the black german Shepherds are a bit more expensive than normal ones. Even though the black puppies have similar characteristics to the regular GSD, you have to pay extra money. 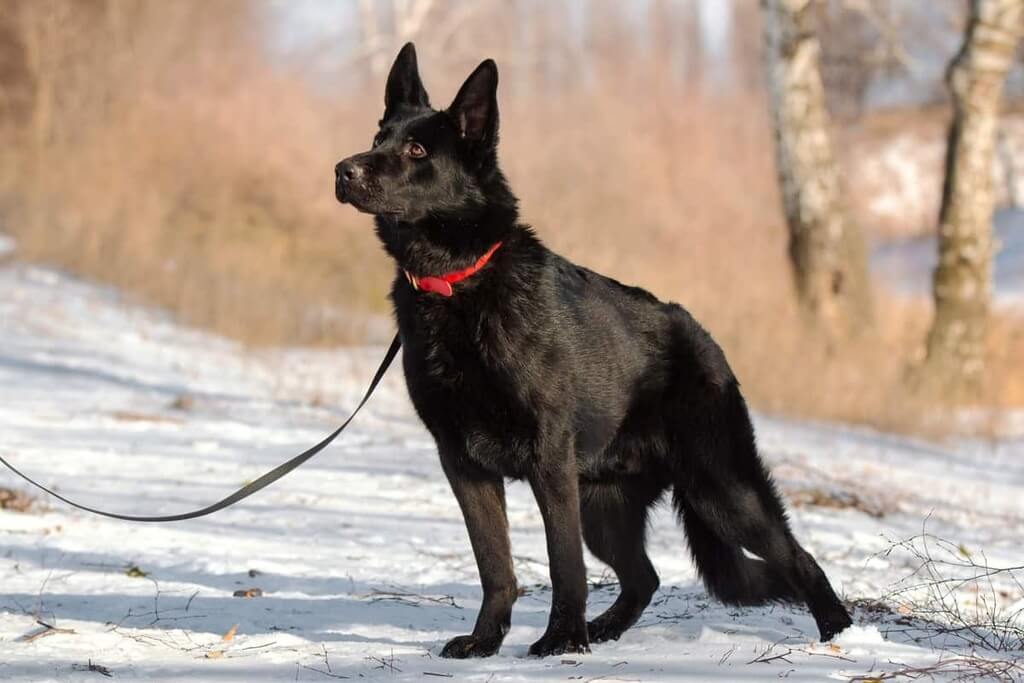 This is another important factor that needs to be considered while thinking of getting a german shepherd puppy.

Black german shepherd dogs are only recommended for experienced pet owners. This means if you want to adopt a german shepherd puppy, you should have owned at least one puppy in the past and have proper knowledge about active pets. For example, if you have good experience having a Shih Tzu, still you’re not qualified to have a german shepherd as it comes in the medium-sized active dog category.

Black german shepherd dogs are highly active and energetic dogs, so you have to give them proper training and attention. Without all these things, these canines can easily become aggressive and destructive.

So if you’re planning to get this dog but don’t have any pet experience, we recommend taking your time. You have to think about how much time and attention you can give to these dogs. Apart from this, these puppies are expensive, and there are also other living expenses such as food, grooming, health, and training. 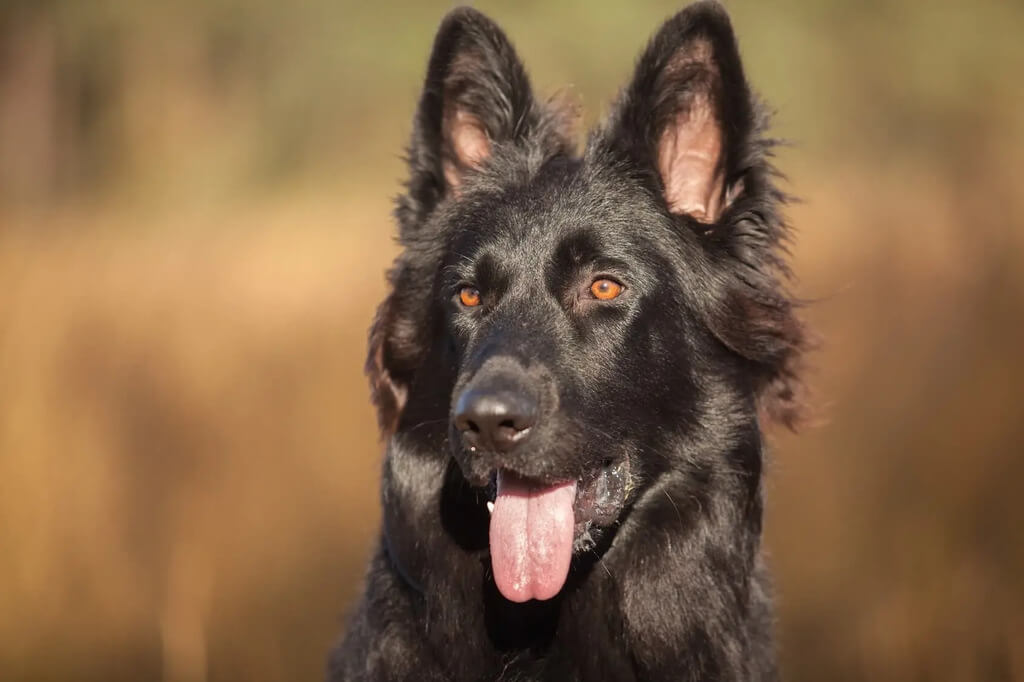 2. How Big Do Black German Shepherds Get?

Full-grown black german shepherd dogs usually weigh around 55 to 100 pounds with a height of 22 to 26 inches. However, their size and weight usually depend on their parents.

4. How Much Does Black German Shepherd Puppy Cost?

Also Read: All About the Magnificent White German Shepherd

Yes, these canines are friendly and socialize dogs. These dogs are proven to be great family pets and companions when trained correctly. With their sweet personality and protective nature, these german shepherd dogs have already won the hearts of many pet owners.

So this is all about the black German Shepherd. These dogs are a great addition to families who have experience owning dogs previously. Make sure to give them proper attention and time. You have to give them at least 1-2 hours of exercise and playtime to stimulate their energy. Apart from this, they also need regular grooming and brushing. So, if you’re ready to provide all these things, you are ready to adopt a black german shepherd puppy!

I hope this in-depth guide on the black German Shepherd has given you the necessary information to make your final decision. Please share this blog with your family and friends if you find it helpful and informative.