All About the Magnificent White German Shepherd

German Shepherds; We know them as strong, fierce, loyal, and protective dogs, and the picture that pops up in our head with all these qualities, when we hear the name German Shepherd, is of a black or a tan and black dog, which is the most favored and common coat color. But did you know there’s a white variety too?The white german shepherd is also known as the white shepherd is a variety of the german shepherd which is bred in the United States. Records of the white german shepherd are also found in Europe. They were banned from registration in their native country, Germany to maintain the breed standard but they gained quite a following in the USA and Canada.

The all-white german shepherd dog is known for its plush white coat along with its high intelligence, trainability, and athletic body. They are bred from German shepherds and hence, they exhibit many similarities of the breed.

Note: The white german shepherd dog exhibits the complete white coat due to the expression of the recessive gene for the white fur coat.

All white German shepherd dogs are among the most beautiful canines in existence. They are gracious and fierce at the same time. Many of you might be wondering if they are Albino German shepherds? The answer is no.

Although Albino GSDs do exist, the white-haired german shepherd isn’t like that. They have their white coat color due to masking of the gene that imparts color to their coat. 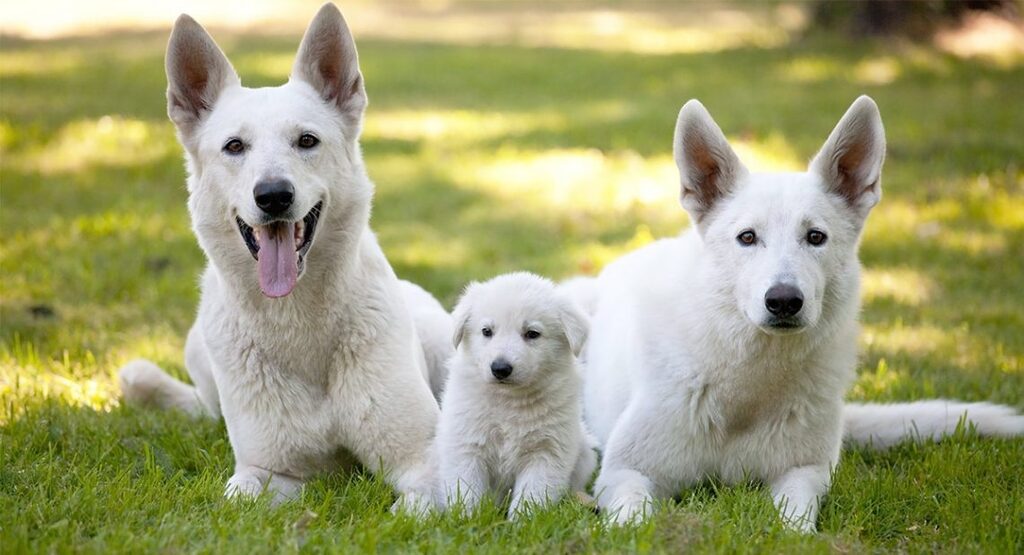 The pure white-haired german shepherd dog has no genetic differences when compared to a black and tan or pure black german shepherd except for the coat color. The white coat color is only because of the recessive white fur gene. Just how humans can have black hair or blonde hair depending on their genes.

The German shepherds are known for their fierce loyalty and protective nature which makes them good candidates as police dogs, military dogs, and herding dogs. The all-white german shepherd is not much different than that.

Their place of origin is North Germany where they were used as herding dogs. The oldest known german shepherd in the records was known by the name Horand von Grafrath and was born in 1895. He had a white Thuringian shepherd grandfather called Greif from whom the origin of the white gene is traced.

In 1933, nazi Germany tarred its reputation as they believed it was an albino dog and the color was because of faulty genes. They were even considered responsible for causing diseases without any scientific evidence. Thereafter they were not allowed in standard breeding and registration.

Even after all of that, the admirers of this breed led to the continuation of breeding in The USA, Canada, and across Europe. The white german shepherd breeders redefined the breed to protect their complete elimination.

The  UKC (United Kennel Club) of America recognized this breed in 1999 and since then the All white german shepherd has been gaining popularity.

Genetics Behind the White Coat 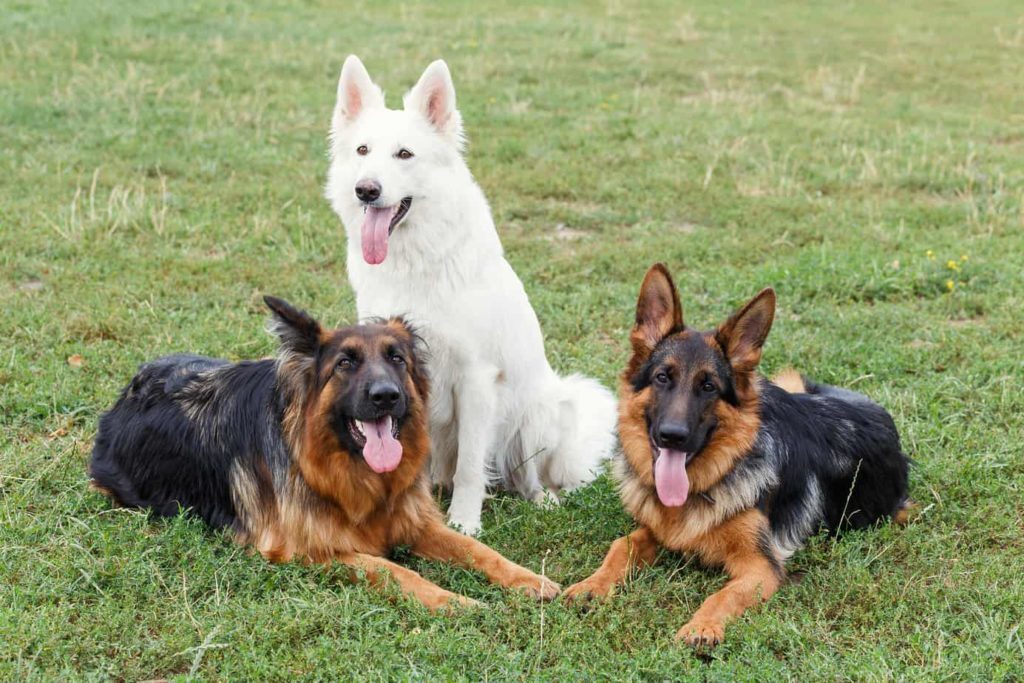 Since the gene for the white color coat is a recessive one, for a german shepherd to be completely white, both of its parents need to pass on the white gene to the offspring.

If the pup inherits the white gene from only one of the parents then it will be of other recognized colors like black, black, and tan, etc depending on the dominantly inherited gene. Thus both parents being white is the only case that guarantees a white litter.

Although a pup from two nonwhite GSDs can sometimes show all white coats (rare) if both the dogs pass the recessive white gene to the pup. They are differentiated from albino german shepherds as the albino dogs have pale features, pink noses, and paw pads, and very pale skin, unlike the white-haired german shepherd that has dark eyes and black noses and paw pads. 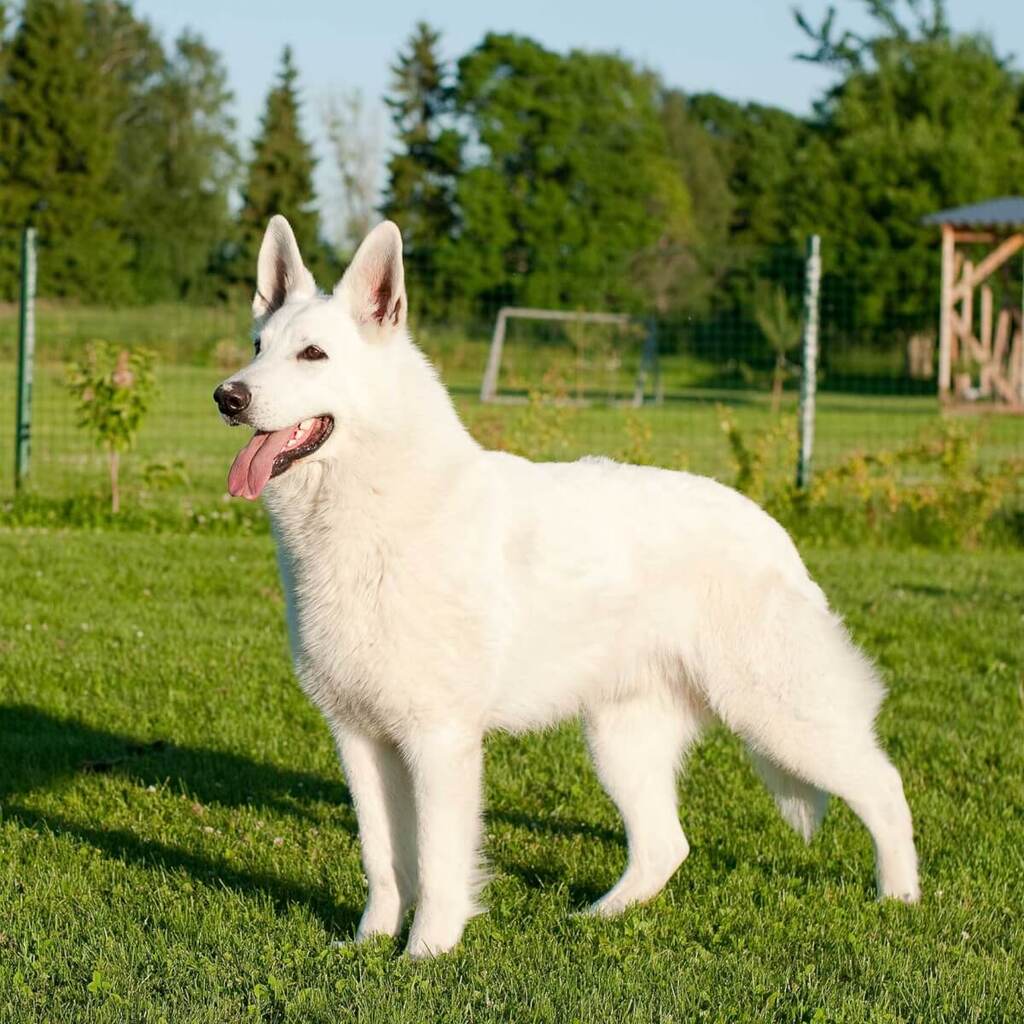 They are pretty similar in body configurations to the regular German shepherds with the male weighing between 75 to 85 pounds and the female weighing around 60 to 75 pounds. They are 22 to 26 inches in terms of height with females being a bit shorter than their male counterparts.

White shepherd dogs have long, bushy tails and large ears that stand erect. Their eyes are commonly dark brown or black in color. They are long-haired white german shepherds and are longer than they are tall.

These pure white german shepherds or off-white GSDs have a double coat. The undercoat is dense and fine-textured whereas the outer coat is thick and straight. This prevents them from getting too cold or too hot depending on the season. Their skin is greyish to light pink with a black nose, paw pads, lips, and rims of the eyes. 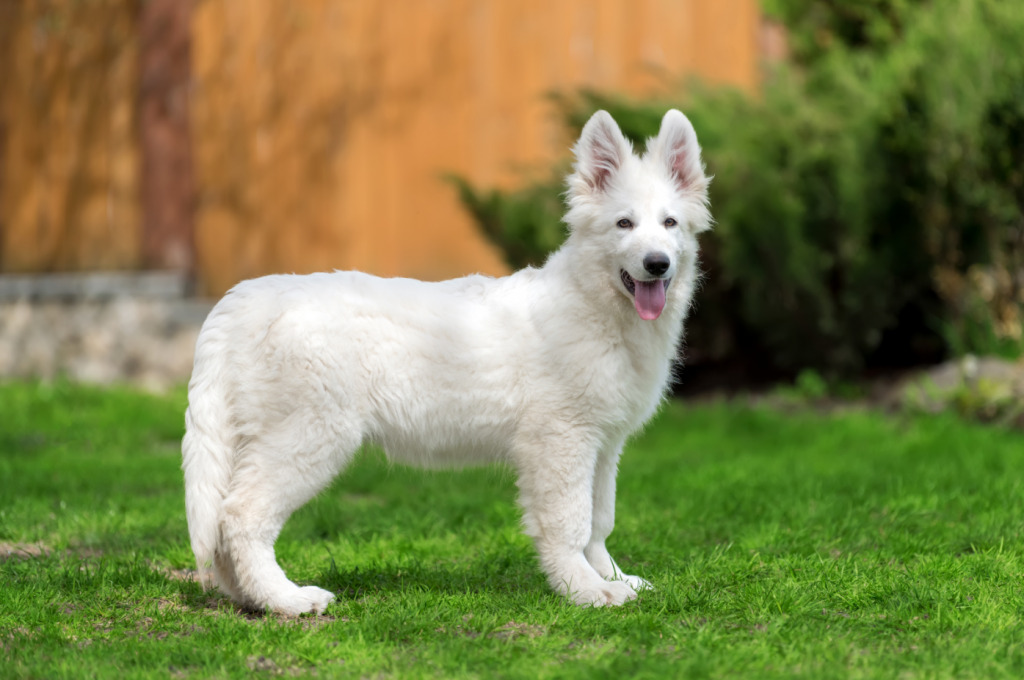 The white shepherd has a thick and straight coat that requires regular grooming. They shed all year round and you need to brush them daily to minimize the amount of shedding. Bathing is only needed if they smell bad or look dirty.

Brushing their teeth or giving them dental chews is important to prevent periodontal disease. 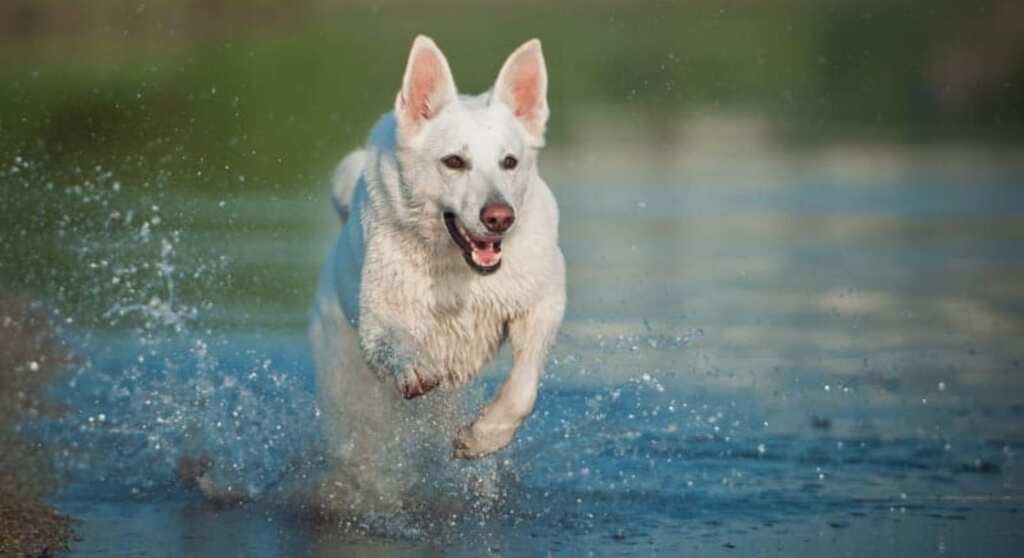 Just like the regular german shepherds, these white beauties are also known for their intense loyalty. They are protective in nature and prove to be good guard dogs as well as watchdogs.

The white german shepherd puppies are social in nature and love being around people and other pets which makes them an excellent choice as family dogs. Their strong athletic personality also makes them suitable candidates as working dogs.

The white shepherd puppies must be socialized at a young age with dogs as well as humans to prevent overprotectiveness leading to aggression. They are active dogs that need a high amount of physical and mental stimulation, so if you have a sedentary lifestyle, they are not the right choice for you.

They experience separation anxiety if not trained at a young age, which may lead to destruction or excessive barking when left alone for a long time. 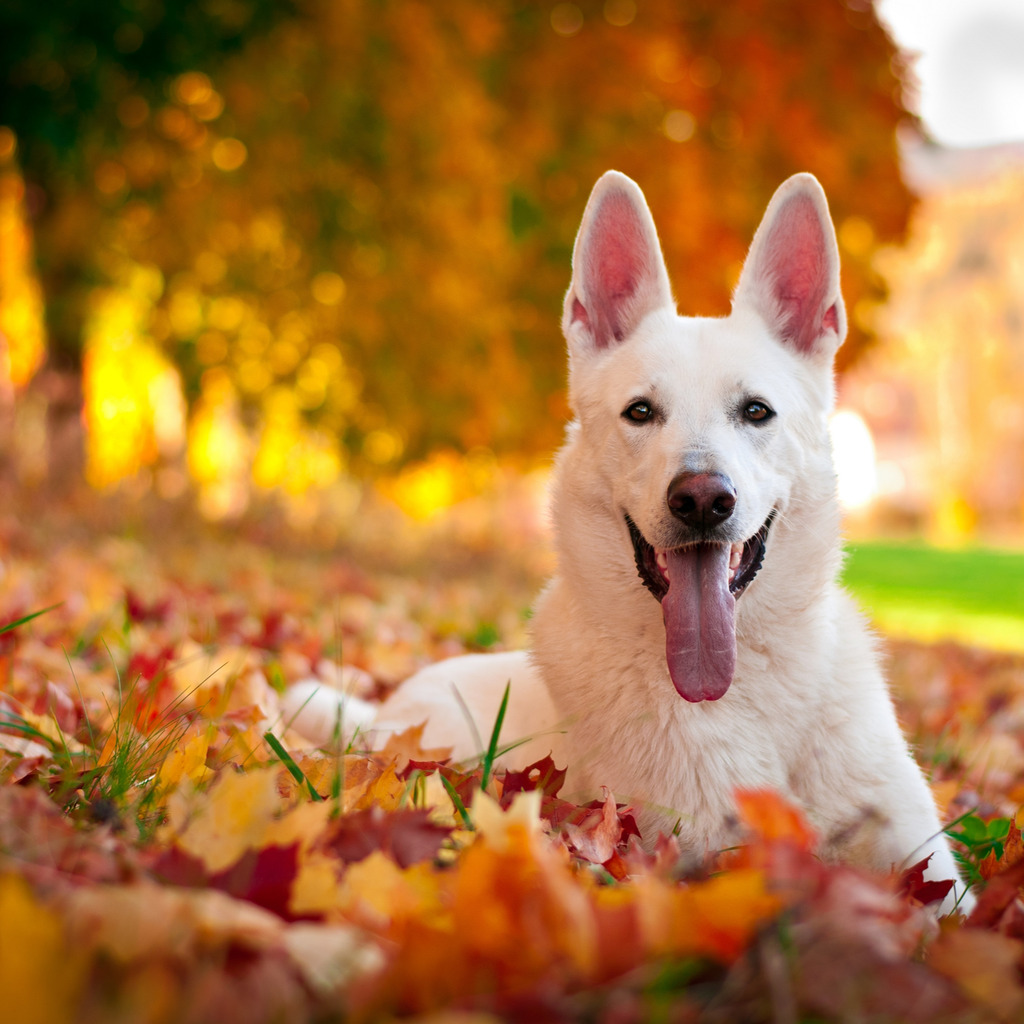 The white-haired german shepherd dog is a large breed and thus requires food according to its size. The quantity of food is mentioned on most brands of kibbles. If you decide to feed your dog home-cooked meals, please consult your veterinarian to guide you on the quantity of food and its composition to provide an overall balanced diet to your dog. 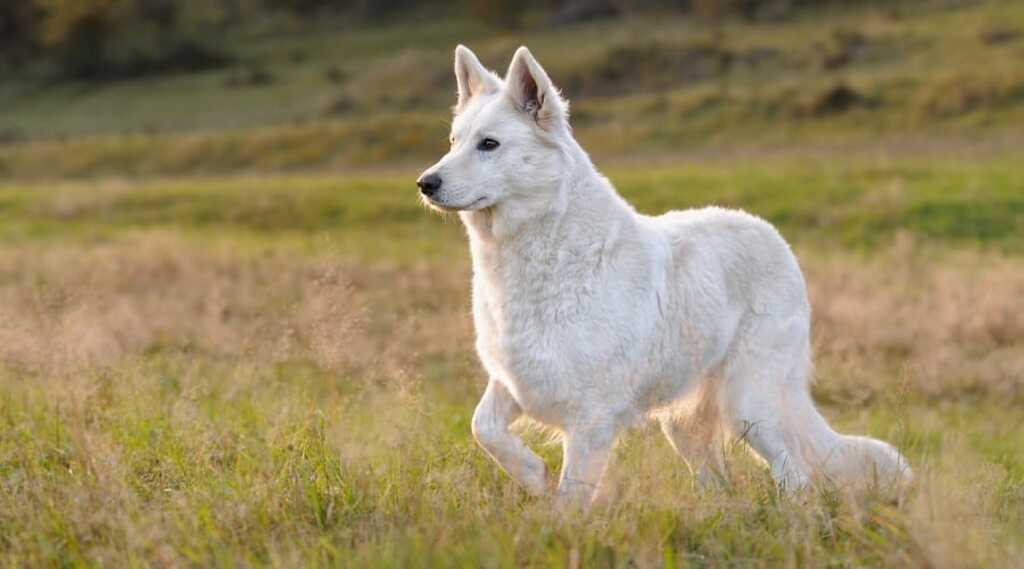 As working dogs, they have high energy and need a lot of exercises. They should not be cooped up in a small place. To keep them happy you must provide them with a lot of physical and mental stimulation in the form of walks, exercise, play, and puzzle feeders.

60 to 90 minutes of daily exercise is a must for this breed. They are extremely intelligent hence you can easily train them. Training also provides a lot of mental as well as physical stimulus. 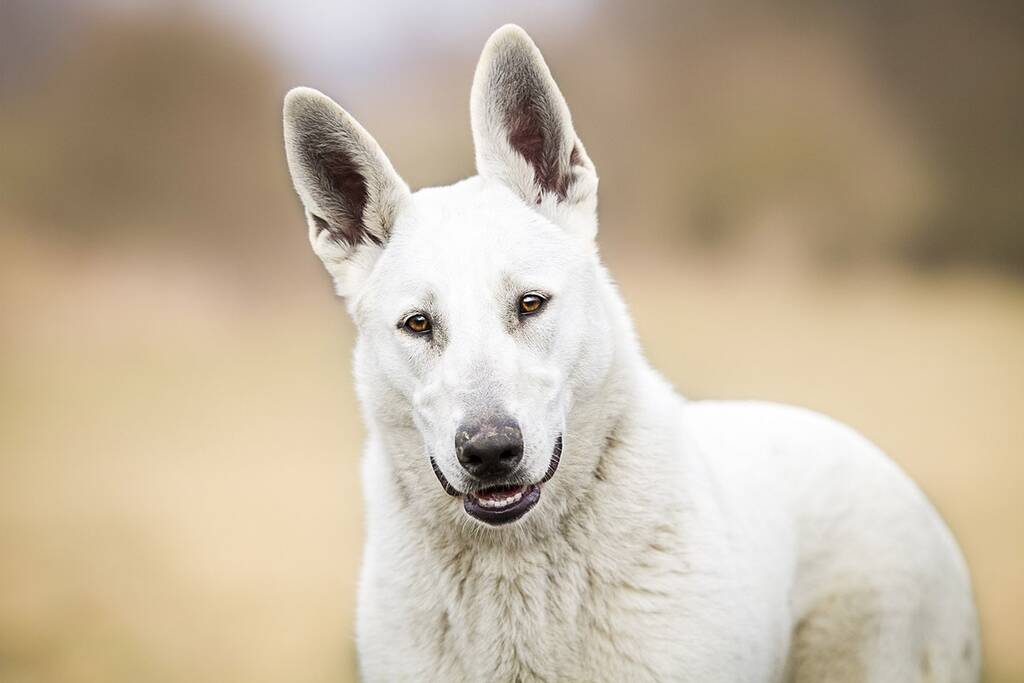 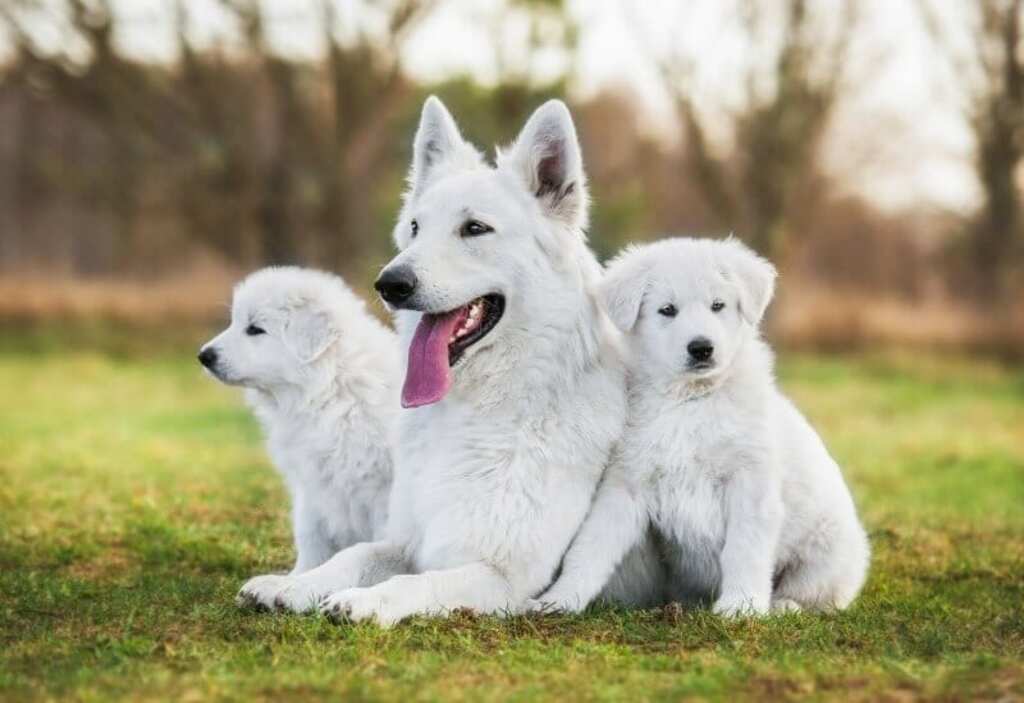 The litter of white shepherds contains 5 to 10 white german shepherd puppies that look like little balls of fur and are irresistibly cute. They reach 50% of adult GSD size by 4 months of age as they are fast-growing.

The white german shepherd puppies attain full growth by 1 year of age and are classified as large breed dogs. Even as puppies they have big feet and are strong and sturdy. 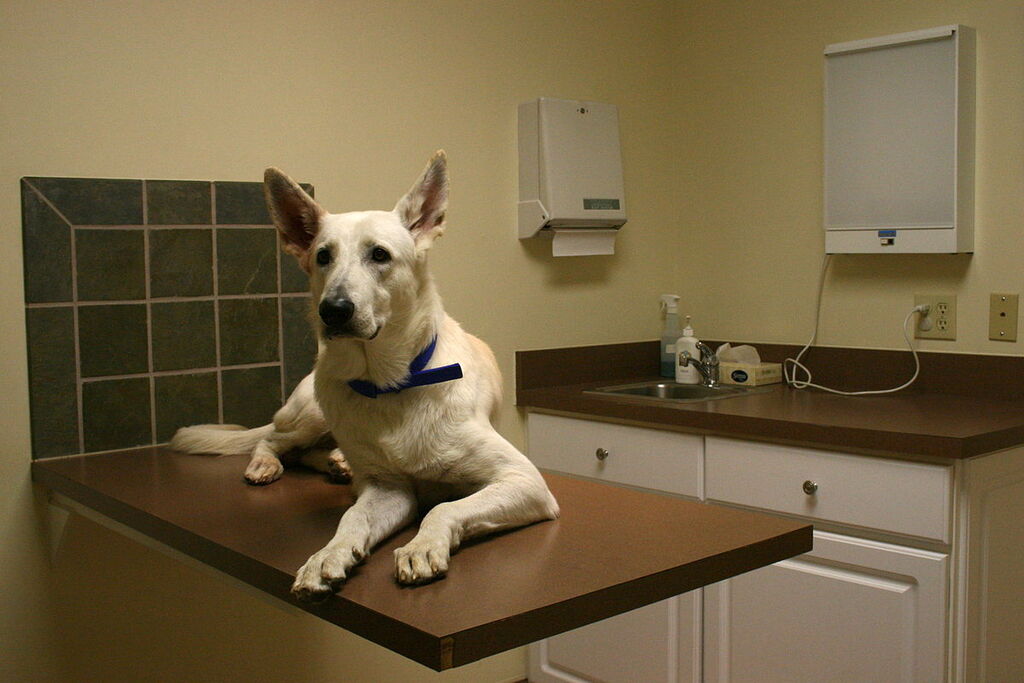 Like most large breeds the all-white german shepherd’s dog is predisposed to hip and elbow dysplasia. They do not have any health concerns due to their white coloration and it is just a widely believed myth.

To conclude there is nothing wrong with owning an all-white german shepherd if you can fulfill all of the above requirements which are mandatory to keep these beautiful souls happy and healthy.

They are not genetically different from the regular dark-colored shepherds and adding them to your family will bring only love and joy.