What is Tarantula? A giant spider with lots of hair. Only a few of us would be its fan, but getting it as a pet is no harm. It is like an introvert species that doesn’t like being held. Maybe your type! There are 900 different tarantula species, among which one is curly hair tarantula. You can call it wooly tarantula. The cousin of red knee tarantula can bring on hours of entertainment to both adults and children.

It doesn’t look as appealing as colorful tarantulas, but its curly hair does the wonders in the appearance. The bonus point to add is the shade of the hair. The hair on the body ranges from dark brown to blue with the golden hair.

Too much of hair-hair, right? That’s the beauty of this pet. Let’s move on to the other parts of its body.

This type of tarantula has a round body and legs (too many). The color of legs is a darker shade of brown, muck like a bronze sheen. As I said, the creature is all about hairs; it has curly or wavy hairs around the body but is denser near the hind legs.

Now you know what it exactly looks like! Next, I will discuss its history.

Curly hair tarantula is a terrestrial species and is native to tropical forests in Central America, from Costa Rica to Honduras. Carlos Valerio discovered this amazing species in the year 1980 as Brachypelma Albopilosa. Later on, it was named Albopilosum.

There are 900 tarantula types, so it is natural; each will have distinct features. Do you know? Some tarantulas can live for 40 years. Amazing. Isn’t it?

How long can our wooly tarantula live? Up to what size it can grow? It’s time to know the answers to all the questions that revolve around the curly hair tarantula. 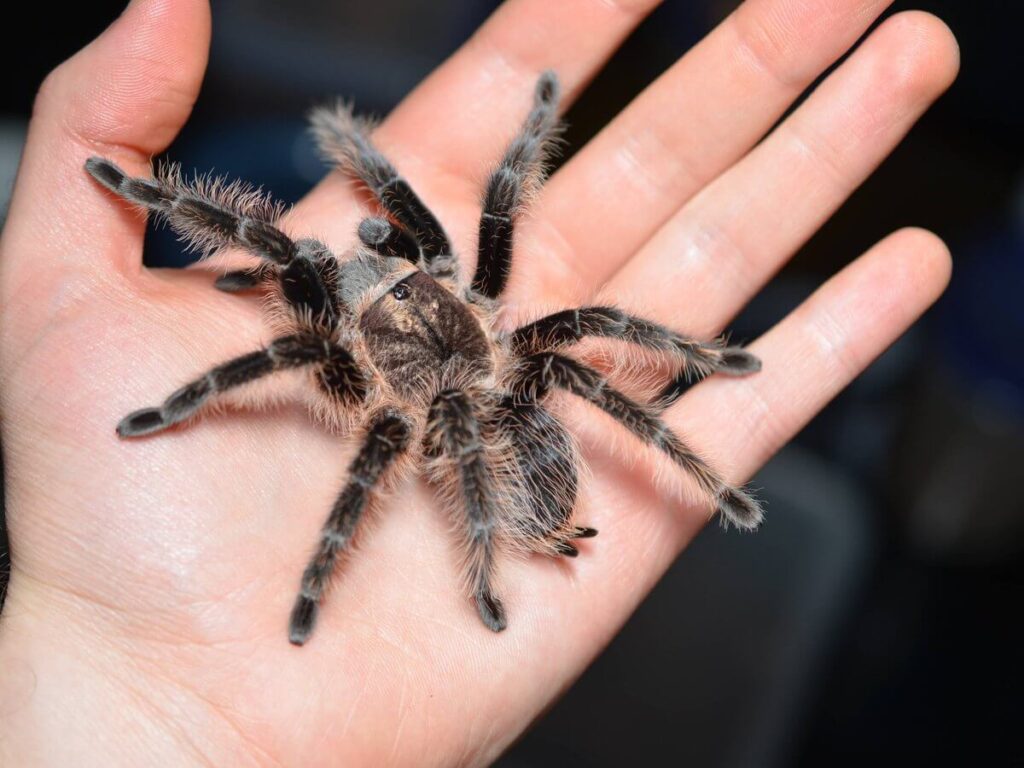 Life Expectancy: Between 8 to 10 years (males lives a maximum of 4 years in captivity)

Having tarantula as a pet requires being informative about its temperament, habitat needs, food requirements, and health issues. After reading the entire article, you will find out if it is your soul-pet.

The temperament of Curly Hair Tarantula 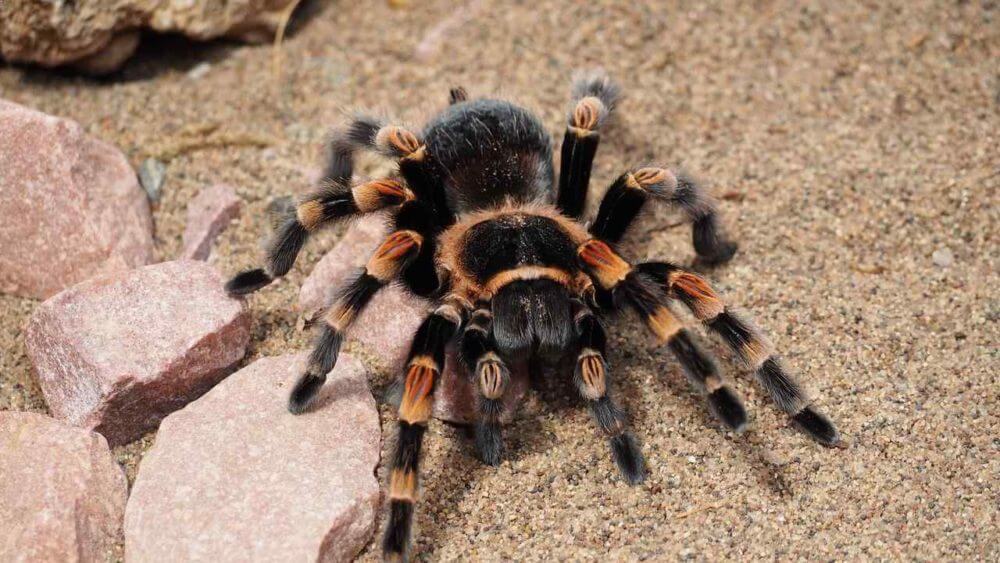 They are a calm and easy-to-go-with kind of pet, but sometimes they get boring. While in a cage, they might rearrange the things you kept, and it will look adorable. Make sure not to spook them, or else they will hide.

Curly hair tarantulas don’t like being held or poked and might bite you. Though its venom is not that harmful, it can still react. Like other tarantulas, it also has “urticating hairs,” which might be allergic to you.

They flung this hair to attack the predators or other dangers. Urticating hairs are thorny, but it causes skin allergy to humans. Plus, they can be harmful if they land in your eyes, and whenever this happens. Consult the doctor ASAP.

Hence the conclusion is – ‘Try not to take them in hands, let them be free.’

The sad part is, because of this, it’s unsuitable to have it as a pet for the house with children. The sudden squeeze or squirm with a drop can take its life. You won’t want that, would you?

Housing for the Curly Hair Tarantula 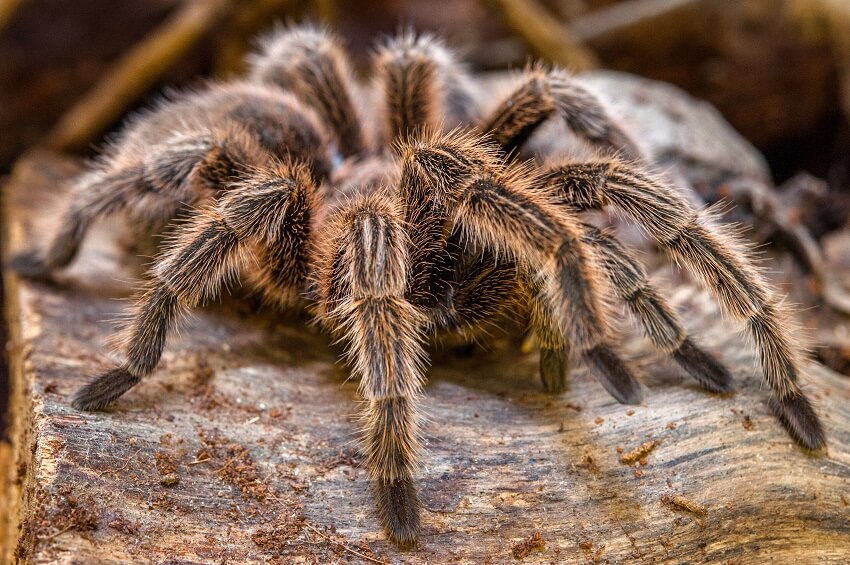 For housing, go for a small one with the highest width and lowest height. The reason behind it is, they are not excellent climbers. While getting or building a house for a wooly tarantula, the width should be three times wider than its leg span. Speaking of height, it should be equal to his leg span.

Add the substrate of three inches comprising peat moss, soil, and vermiculite. Another choice is getting the coconut husk as a substrate from the pet stores.

The curly hair tarantula needs a shelter to retreat, add few cork barks, wood, or half of the small flower pot. Your pet likes to stay at a warm temperature around 75 to 85 degrees Fahrenheit.

If your house is in a chilly area or you like to keep your house cool, add a heating pad in the tank of a tarantula. You can also place the red table lamp near it. Don’t worry about the light, tarantula pet won’t mind.

Besides all these, a humid atmosphere is also necessary for its well-being. The humidity should be at 65 to 70 percent if that’s hard to achieve. Place the water bowl in the tank.

Pro-Tip: Tarantulas are too risky to handle, it involves the loss of their life, so make sure the pet is in a safe location while cleaning its home. 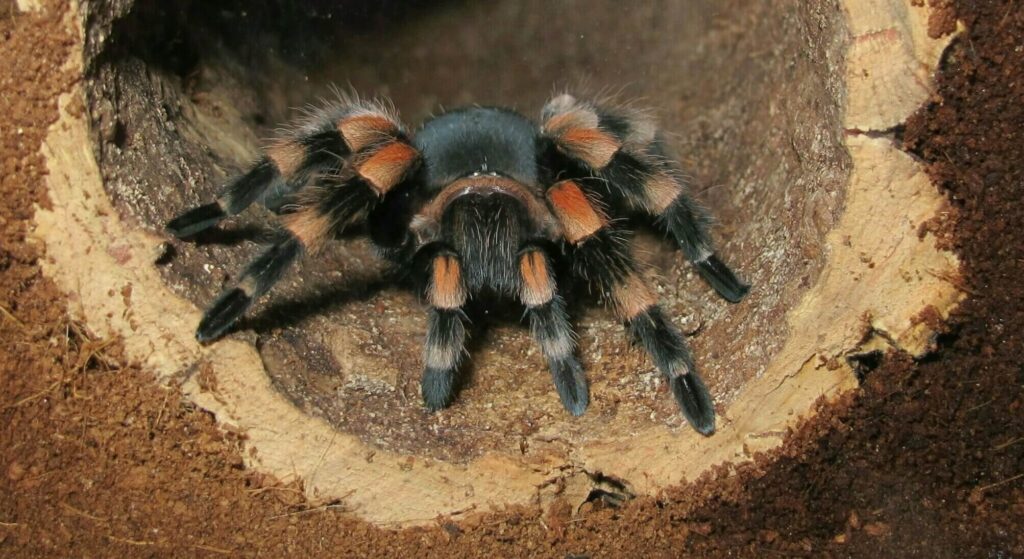 The hydration of the tarantula depends on its food, and they prefer nothing to live prey. Not even pre-killed! They mostly feed on live crickets and other enormous insects.

When feeding the younger one, make sure the size of an insect is 3/4th of the tarantula. Adult curly hair tarantula can feed on the large insect as itself. Remove the remaining food, as it is the undigested part of the insect.

For a treat, you can give your pet a pinky mouse on a dinner plate. Don’t worry about overfeeding the younger wooly, that’s not possible in its case. If the adult one is eating once or twice a month, that’s okay. Don’t panic, you are not underfeeding it.

Provide fresh water to the pet tarantula. Get a shallow vessel for it, but its size shouldn’t be deeper more than a lid of pickle, jam, or any jar. A slightly larger container can make you see the dearest wooly tarantula drowning. 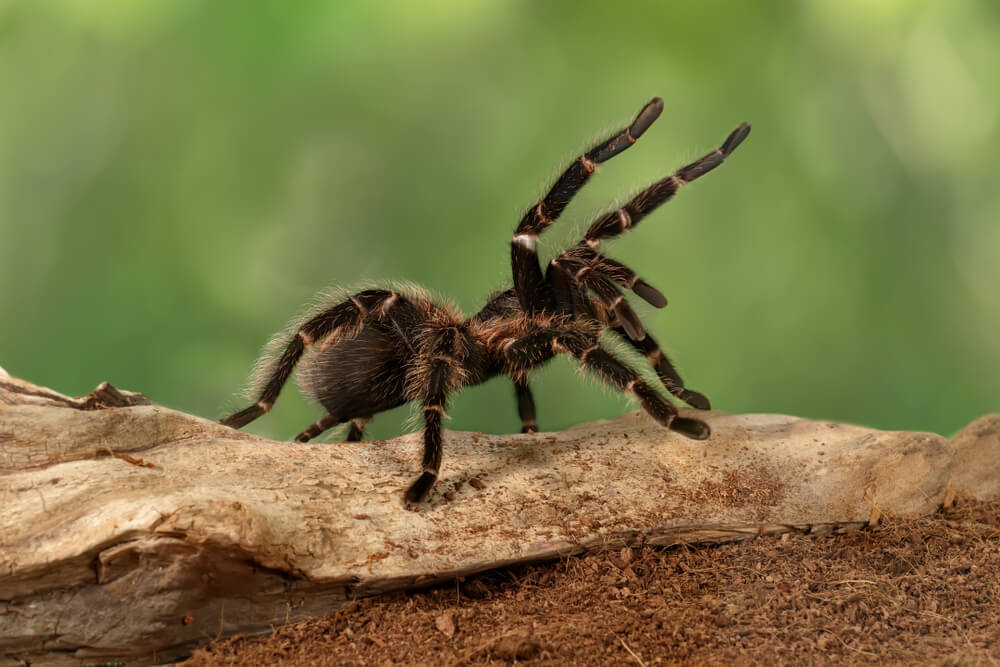 There’s no vet that can treat your tarantula. But this won’t be an issue as they are not prone to any serious disease. There are chances of nutritional issues or dehydration, which you can solve on your own.

The question is, “How will you get to know whether it is suffering from nutritional issues?”

Check its abdomen. If it’s shriveled or has transformed into grape-shape, then wooly needs more food. If it seems swollen, then cut back. Proper intake of food will also keep the curly hair tarantula hydrated.

Also, it might not eat food when it’s time to molt, so don’t worry. (Molting is shedding the old hair and regrowing the fresh ones. This happens once a year.)

Last but not least, don’t handle it with hands. You might end hurting it or killing it if dropped.

Get the Pet That Won’t Disturb You

Now you know everything about the curly hair tarantula from its temperament to its needs and wants. If you want a pet that stays with you for years and years, then go for the female ones, as female lives longer than males.

Curly hair tarantula is the soul-pet if you are in search of a pet to look at for the relaxation after the tiring day at the office. For more information on unfamiliar types of pets, visit Petsnurturing.