Doberman is a fun, happy, active, and perfect kind of dog, but do you know that there is more than one variant of this dog breed?Yes, it’s pretty surprising, but that’s the truth!

Don’t worry; you’re not alone; only a few people know about this.

So basically, there are two types of Doberman dogs: European Doberman (also known as the Dobermann) and the American Doberman Pinscher.

At first glance, you might think that these two dogs are the same and there is nothing much difference! Yes, there are many similarities as they both come from the same breeding, but there are also many differences.

So, what are the key things that make these two dogs differ from each other?

You’ve got on the right page if you’re planning to adopt a Doberman puppy or just want to know about the difference between American Doberman and European Doberman Pinscher.

Today in this article, we have penned down the differences between European vs. American Dobermans. We’ve included everything from their origin and history to temperament and characteristics.

Let’s start with an overview of both types of Doberman. 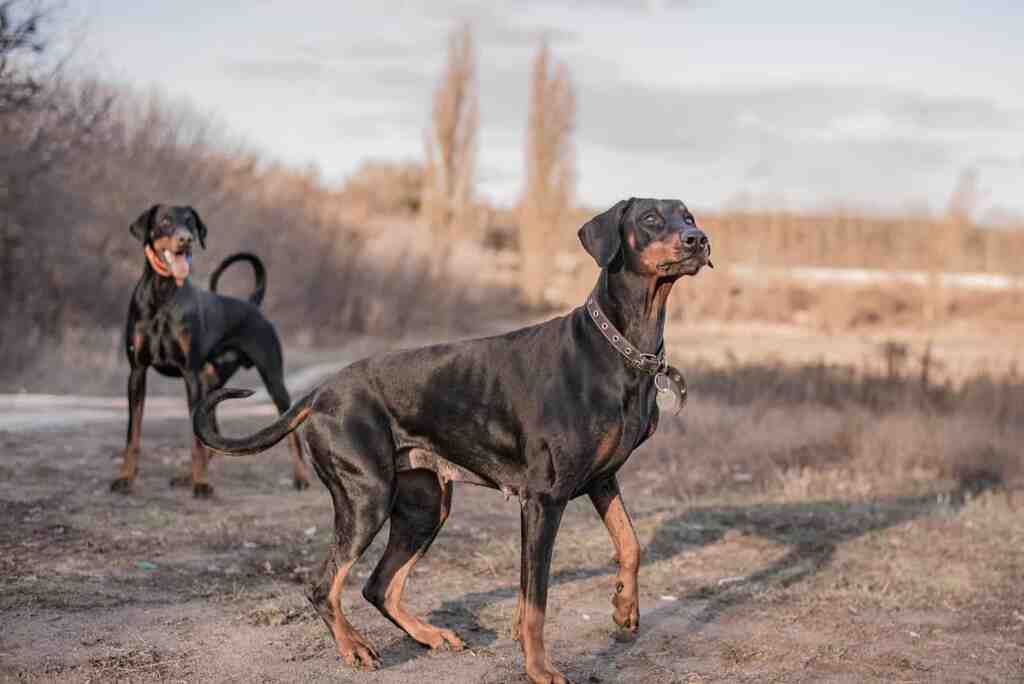 The origins of the European Doberman are from Germany, which was the first-ever bred by Louis Dobermann during the 1880s. He mixed different breeds like Rottweilers with a type of shepherd dog from Thüringen and also the German Pinscher and Tan Terrier.

European Doberman dogs are strong, muscular, and super active. These happy dogs are also recognized by the Federation Cynologique Internationale (FCI), which is the international federation of kennel clubs.

With a fearsome look, these types of Doberman dogs are extremely loyal to their owners. And due to their confident and assertive nature, they’re also used as police and guard dogs.

You can find these dogs everywhere in the world and specifically in Germany, Canada, and the United States. 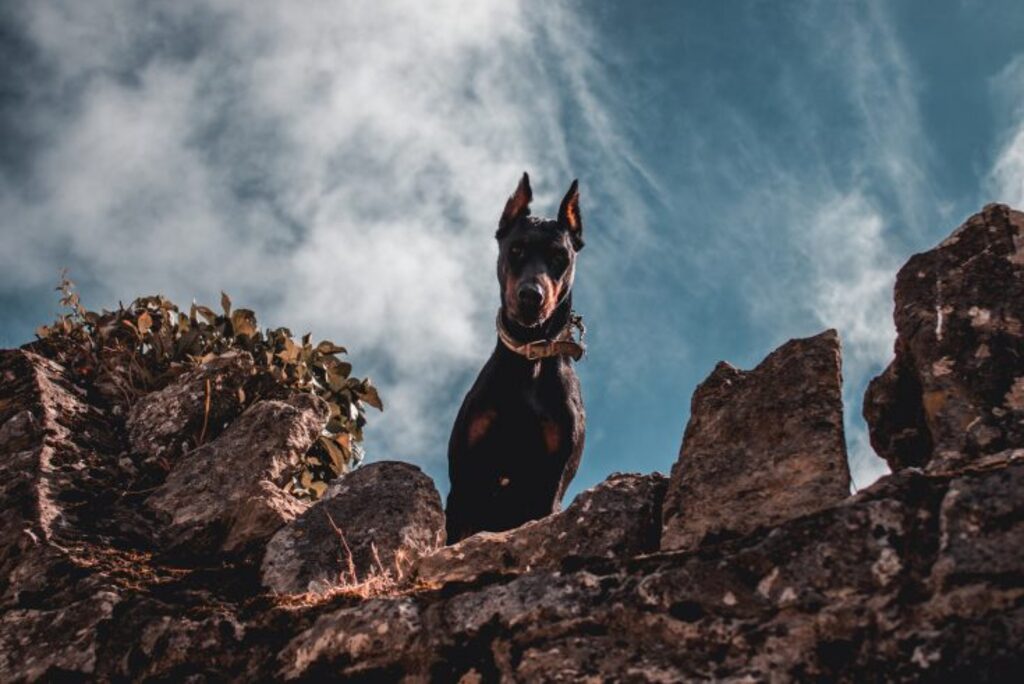 American Doberman Pinschers are not so different from the European Doberman dogs as both come from the same line of dogs bred by Louis Dobermann.

Previously these dogs were known as American Dobermann, but later the letter ‘n’ was taken out. These dogs are obedient and loving; hence they are wonderful family dogs.

According to the American Kennel Club, “they are most often used as family pets, rather than police or guard dogs.”

Easy to train, this dog breed loves its family and is always in tune with their human emotions and feelings. 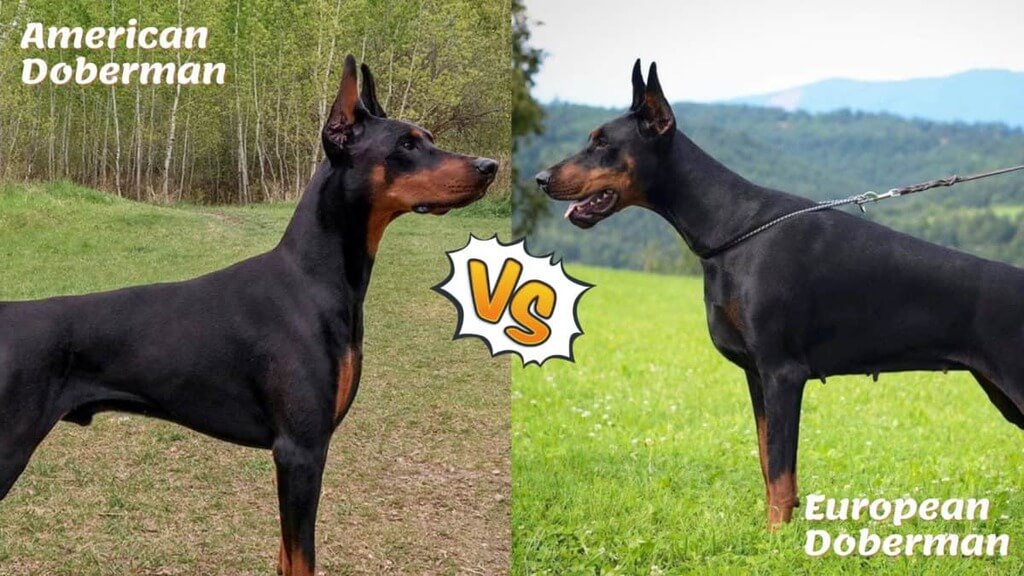 Here is the complete comparison table of American Doberman vs European Doberman:

So this is all about the characteristics and overview of falcon and hawk. But the real question is how to tell the difference between hawks and falcons? Below is the list of top 8 differences from which you can easily identify whether a bird is a falcon or hawk. Keep reading to know! 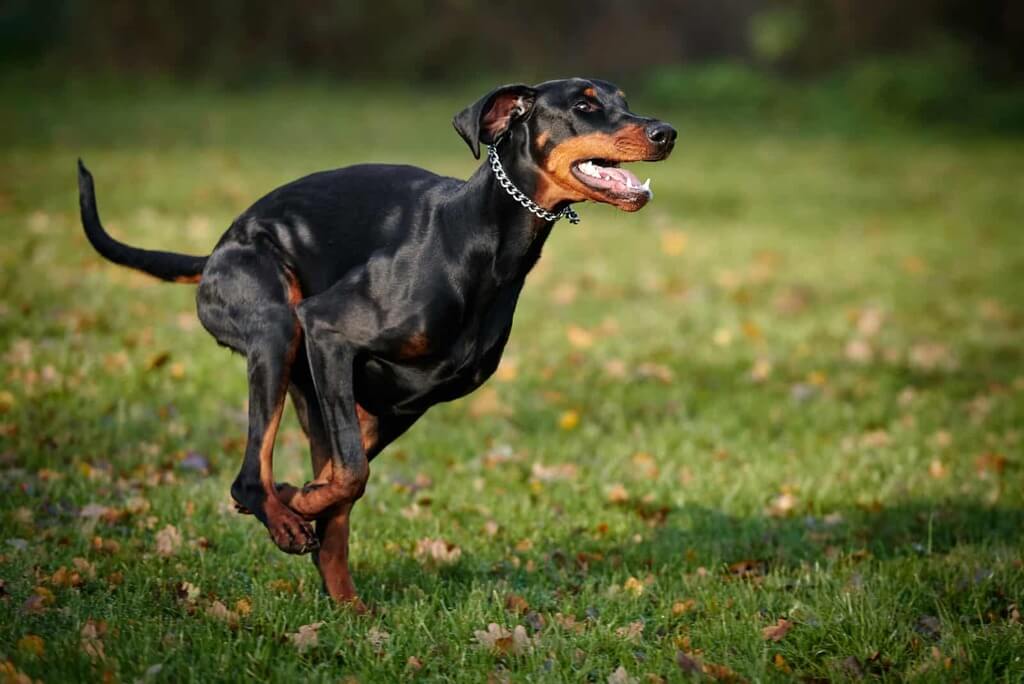 Below are the top 10 differences between American and European Dobermans that can point out their uniqueness clearly. We have also divided their differentiation section-wise so that you can easily and clearly understand everything.

Now let’s know each trait of both dogs in detail.

Let’s start with the first difference between these two dogs by their history. The first-ever Dobermann was bred by Louis Dobermann of Apolda, Germany, in the 1880s.

He was a tax collector and was often bullied by other people. So he decided to breed the Dobermann to defend himself and get a work partner. That’s why Louis is also known as the “Tax Collector Dog.”

Both European and American Dobermans later come from these first Dobermans. They are classified as working dogs (European) and family/show dogs (American Pinscher).

Other than this, there are also Warlock Doberman, also known as “king Dobermans.” This is a result of crossing a Rottweiler or a Great Dane and a Doberman.

European Dobermanns don’t get called by Pinscher because it was dropped by the people as the breed no longer resembles and had many of the Pinscher’s traits.

Another interesting thing about this breed is that American and European Dobermans are spelled a little differently!

During the late 20th century, the second “n” was taken out of the American’s name “Dobermann.” This was done to remove the German influence on the breed as it brought negative connotations after World War II. 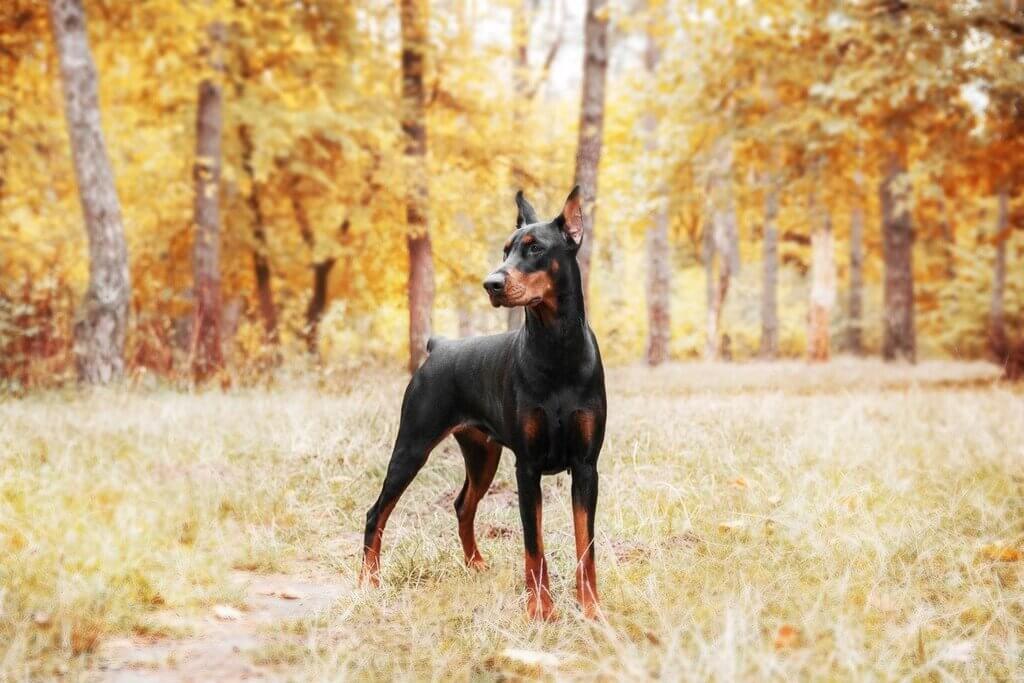 Size and weight are another two key differences in physical traits that can be easily identifiable. With these two traits, you can distinguish between American and European Dobermans.

As per AKC, for the American Doberman, white is not an acceptable color; though the dog can have small white patches on its chest, they should not be larger than ½ square inch.

You might be thinking that the breed standards are strict for American Doberman; just wait for the European Dobermann!

When it comes to European Doberman, the Federation Cynologique Internationale accepts only two color varieties:

White markings are not allowed on the European variant. All these rules are necessary due to the breed suitability test (ZTP).

tan markings in European Dobermanns are usually found on: 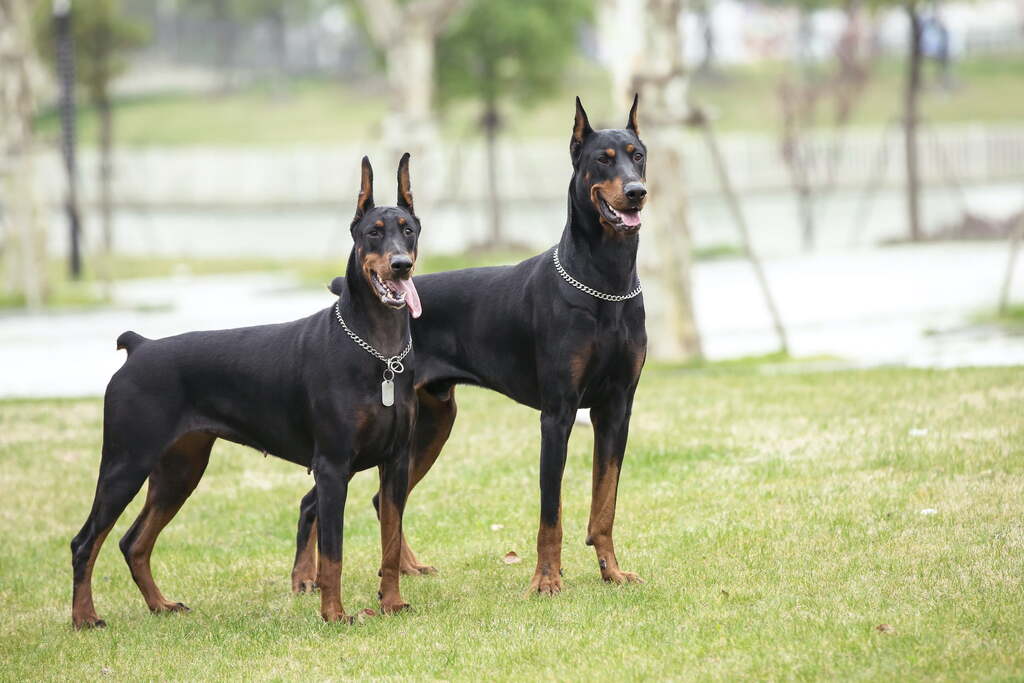 One of the major differences between both the Doberman dogs is their physical appearance.

American Doberman was bred to be shown as showing dogs. That’s why they breed according to a show standard set by the American Kennel Club (AKC). American Dobermans are great at agility and scent work rather than all those bite work.

On the other hand, European Dobermans are bred as per the FCI standard. That’s why they’re really strong, sturdy, and powerful. Anyone can get easily intimidated by a European Doberman. Not only are these dogs bigger and heavier, but they’re also good at personal protection as compared to American Doberman.

Here’s the table of differences in the physical appearance of both the dogs:

Both breeds, American Doberman Pinscher and European Dobermann have about 10 to 12 years.

So make sure to give them a lot of love, care, and support!

Now let’s talk about one of the most important factors about dogs, their health! Many of you have thoughts like American VS European Doberman, which is healthier? Does one breed have more health issues than the other, or do both have the same problems?

Yes, it is, in fact, true that both breeds have similar health problems and canine ailments that usually come from overbreeding and inbreeding.

Here are the common health issues for both the American and European Dobermann:

Dr. Reinhard Haberzetti conducted a study for Dobermans from Germany, Europe, and the USA, which gives results of the estimated spread of degenerative diseases for each variety.

There is no doubt that both dogs are smart, intelligent, and extremely devoted to their family. If they feel any danger to their family, they can attack and bite the strangers. Other than this, they’re friendly and caring dogs. They understand human emotions and love to play and cuddle with their owners.

Here are some Doberman temperament and personality traits of both types of dogs:

Whether you have a European Doberman or an American one, regular training and exercise are important if you want to keep your pet happy and healthy.

Here are three important things that you should know about American vs European Doberman training needs:

You’ll be happy to know that both American Doberman Pinschers and European Dobermann puppies look pretty similar. As they grow up, their body type will differ, and you’ll see other changes as well, as the European Doberman puppy will usually grow 5 to 10 lbs heavier than the American one.

However, it is always recommended to buy or adopt any type of Doberman puppy from a reputable breeder so that you’ll get a healthy and happy puppy.

European vs American Doberman: Which One is Right for You? 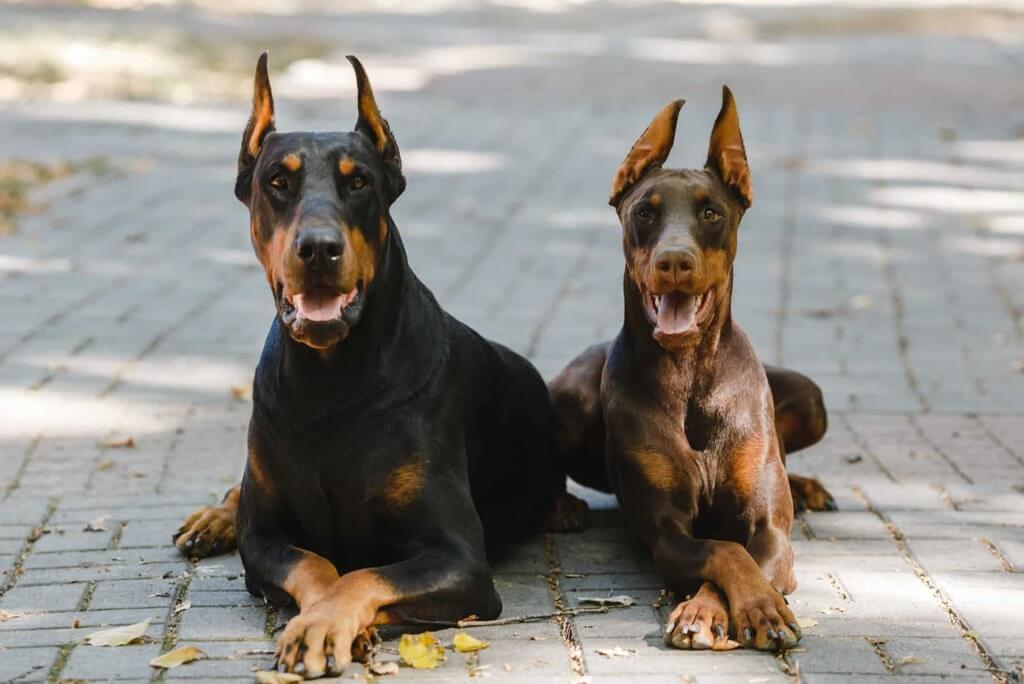 American Doberman Pinschers are loving, caring, and protective, and that’s why they’re perfect family dogs. They’re also great to show dogs due to their elegant appearance and obedient nature.

On the other hand, the European Dobermann is often used as a police and guard dog. They’re also loyal and protective towards their humans. However, these dogs have temperament issues and are not that friendly.

I hope this in-depth guide on European Doberman Vs American Doberman has provided you with all the information you need. So, if you find this blog informative and helpful, please share it with your friends and family.