When we think of a Doberman Pinscher, a sleek and strong, black and tan dog pops up in our heads instantly. Some may even think of a red-colored Doberman. But did you know there aren’t only 2 color combinations. Let’s see colors of dobermans.Well, you’d be surprised to learn that different types of Doberman come not in two, three but in five different types of coat colors, and crossing these varieties may give you more color combinations.

The standard Doberman colors recognized by the AKC are:

The fifth type is White but it is not recorded as the standard color within the AKC. It is important to know all the Doberman types and colors before you can choose the best one for you. Other than the above-stated colors, there’s a full black Doberman and an albino variety which is different from the full white ones.

But out of these three stated varieties, only two types of Doberman actually exist. 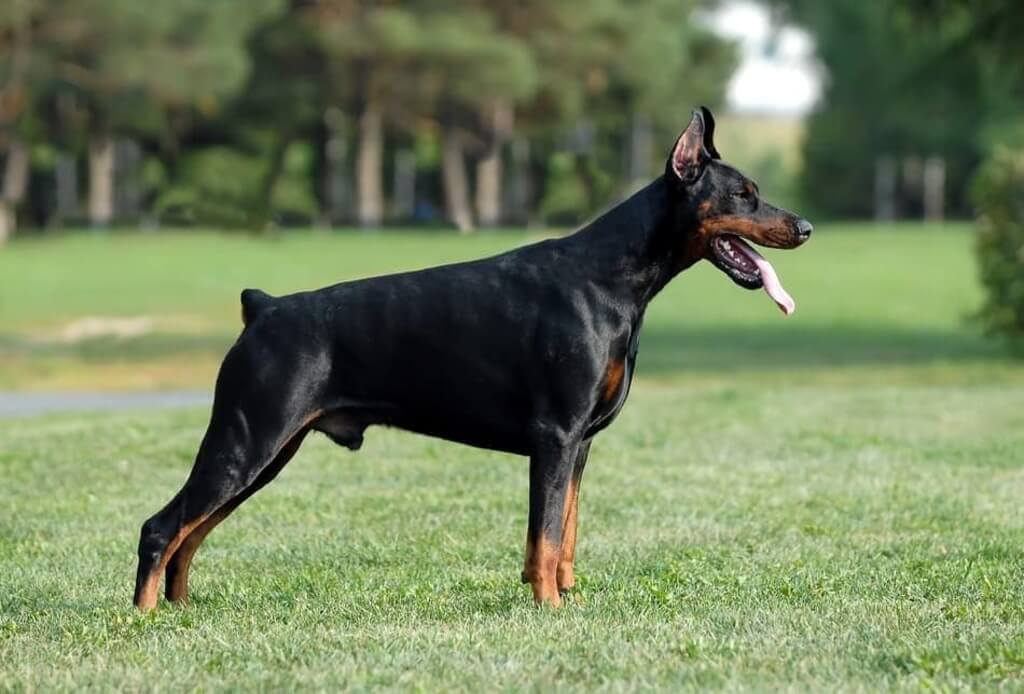 In a European Doberman, the tan markings are clearly defined and located on the cheeks, top of each eyebrow, and on the muzzle. The markings are also present on the throat, in two spots on their chest, between their toes, on their feet, and between the ankles. The markings can also be seen on the front leg, under the tail, and the inner hind thigh.

Most of the markings in the European Doberman are similar to the American Doberman but there is no white patch on their chest as it is not considered the standard across Europe. 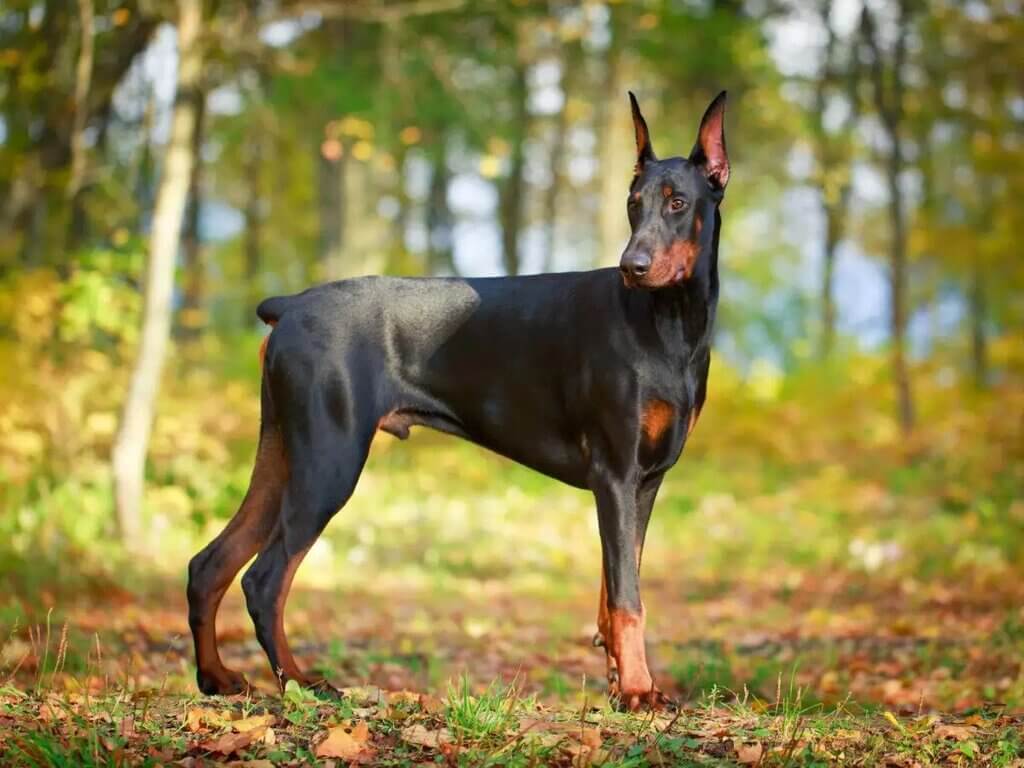 According to the standards set as per the American kennel club, the rust-colored markings in the American Doberman should be defined sharply and they must appear on the muzzle, chest, throat, all four legs and feet and above each eye as well as there should be a patch below the tail.

There is also a white patch on the chest of American Dobermans, unlike the European variety.

The color combinations show seven types but the Albino variety is a theoretical version. There hasn’t been any registered variety that is albino, so it is still unconfirmed.

Although a lot of people do believe that Albino Dobermans exist in all practicality which leads to a lot of confusion over white and albino varieties, we’ll jump into that later on.

The AKC considers only the four combinations stated above as they are controlled by two genes that are responsible for coat color in Doberman.

According to the laws of genetics, two genes can produce four possible combinations and these are black, blue, red, and fawn with rust markings.

Let’s get to know the Doberman colors a bit better….. 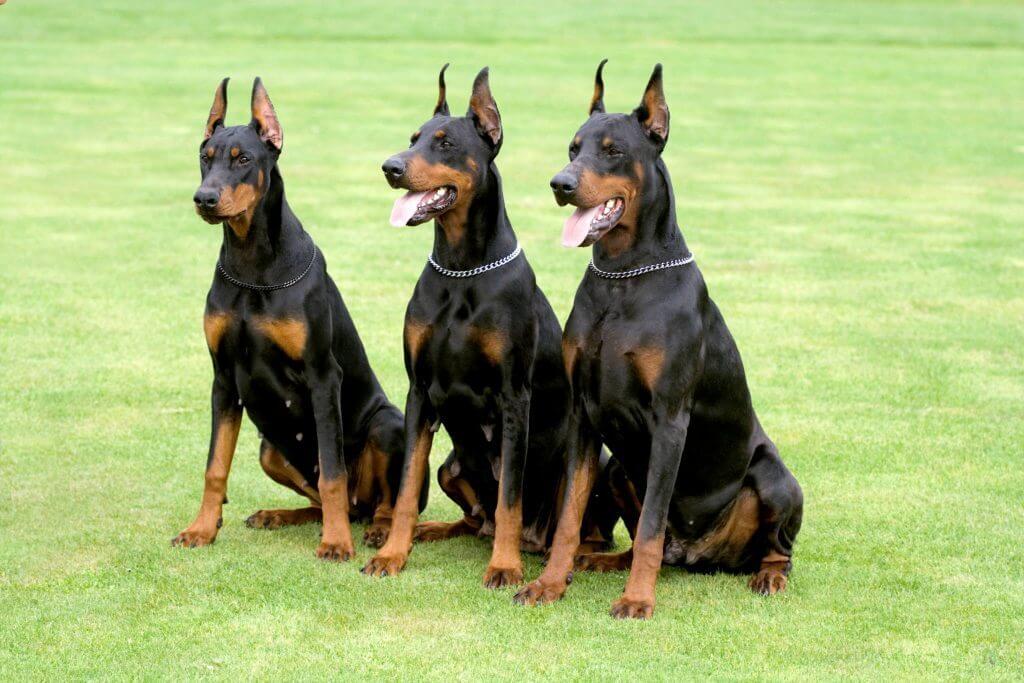 Black and rust Dobermans are referred to as black and brown, black and tan, and black Doberman. They exist as a standard color in both American and European varieties. This is the most common color you will find in a Doberman. Most people are even unaware that there are any other colored Dobermans than the black and brown ones.

Most Dobermans do not do well in extremely hot climates and the only drawback of this color is it adds up to the heat. The coat is shiny and sleek and makes them look elegant and powerful at the same time. Black is the dominant gene and thus if any of the parents have a black coat, the offspring is sure to have it too.

Other than overheating and exhaustion caused by heat, the black Dobermans are generally healthy and have amazing temperaments as well as fearless and loyal personalities. 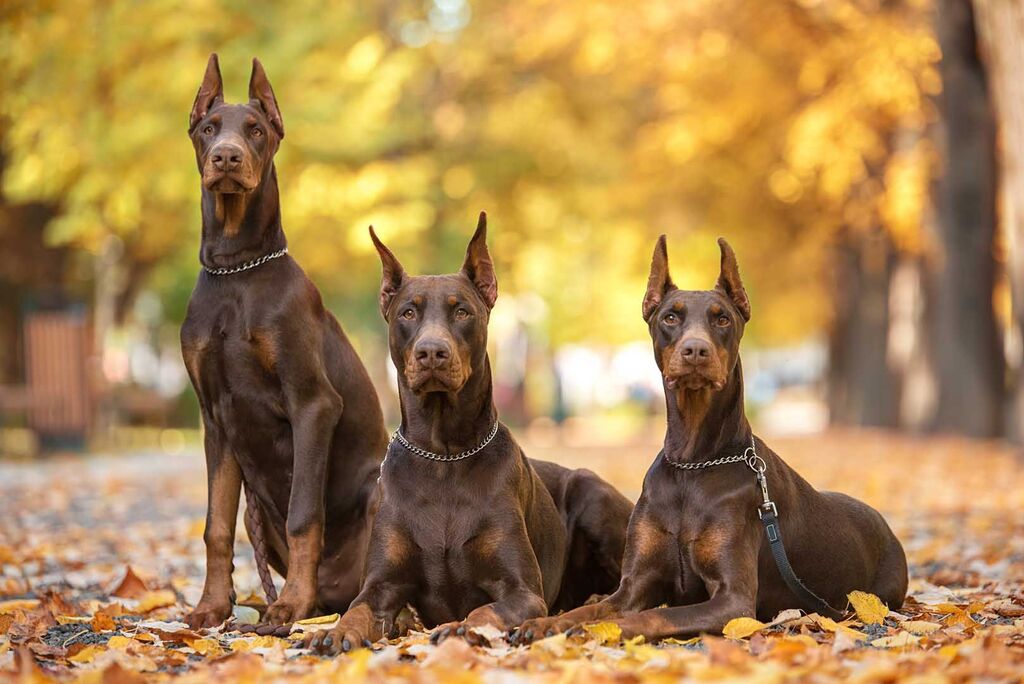 Just like the black and rust variety the red and rust variety also exists and is a standard color for both American and European varieties of Doberman. It is the next most common color and quite easy to find. The coat can be light copper to dark red when it comes to these dogs.

They have a less intimidating look than the black varieties and are a bit light-hearted as well as less territorial in nature. This variety is comparatively more prone to skin conditions but those are pretty easy to manage and minor in nature. They are prone to developing problems like acne and hair loss in puppyhood or events of stress.

Skin issues in your red Doberman can be avoided by putting them on a diet that is designed for dogs with sensitive stomachs or sensitive skin. They may have genetic issues like muzzle folliculitis wherein the lesions form on their muzzles, lips, and chin but this condition is easily treatable with oral antibiotics and ointments.

Both parents must have a red color coat for the offspring to be red in color. even if one parent has a black coat the puppies will all be black, as black is the dominant color. They have better heat tolerance than the black Dobermans. 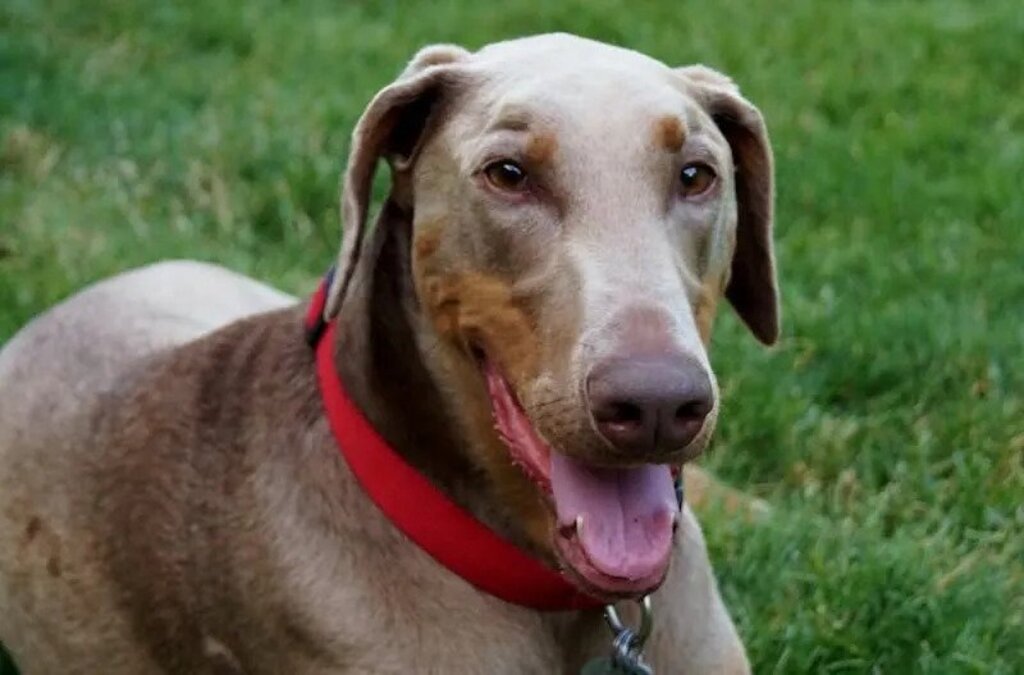 Also known as the Isabella color, the fawn Doberman is one of the rare Doberman colors. The term Isabella is used to describe their almost lilac-colored coat.

When the red Doberman shows the presence of both the dilution genes you get a fawn Doberman. A fawn Doberman has all the genes in their recessive form which is what makes them so rare.

The dilution gene is also known as Melanophilin.

Fawn Dobermans are extremely prone to having color dilution alopecia and its severe case may leave them hairless dog. 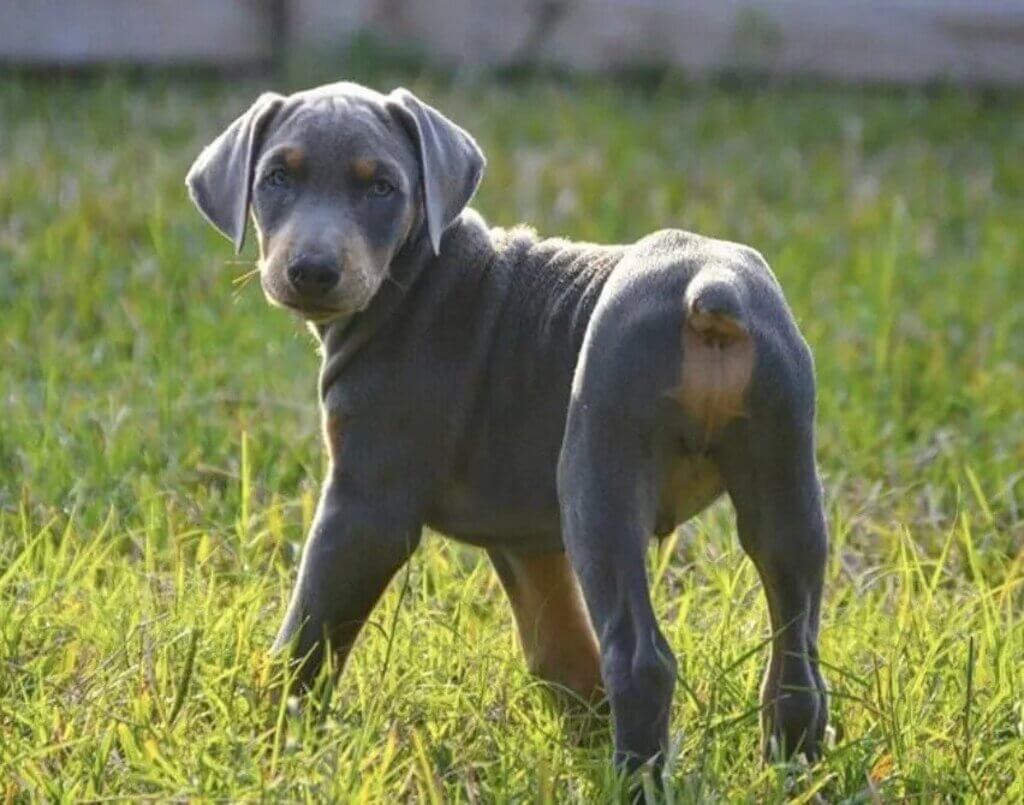 Blue is another rare Doberman color as it is dilute of the black gene. Blue Dobermans are also known as silver Dobermans or steel blue Dobermans. This color occurs naturally in them and the dog shows rust-colored spots just like the most.

They are known as the silver Dobermans as the dilution of black gives them a shimmery look that makes them look silver in the sun. some may be darker in shade than others.

Since blue is another one of the dilute genes, this variety is also prone to the color dilution alopecia. They are bred for the popularity of their color wherein the health aspect remains ignored.

Only a few breeders produce diluted colored Dobermans without compromising their health. Make sure to do a proper background check before getting one of these.

Other than skin conditions the steel blue Dobermans or the silver Dobermans may also show bad temperament and aggression issues which makes them difficult to handle. 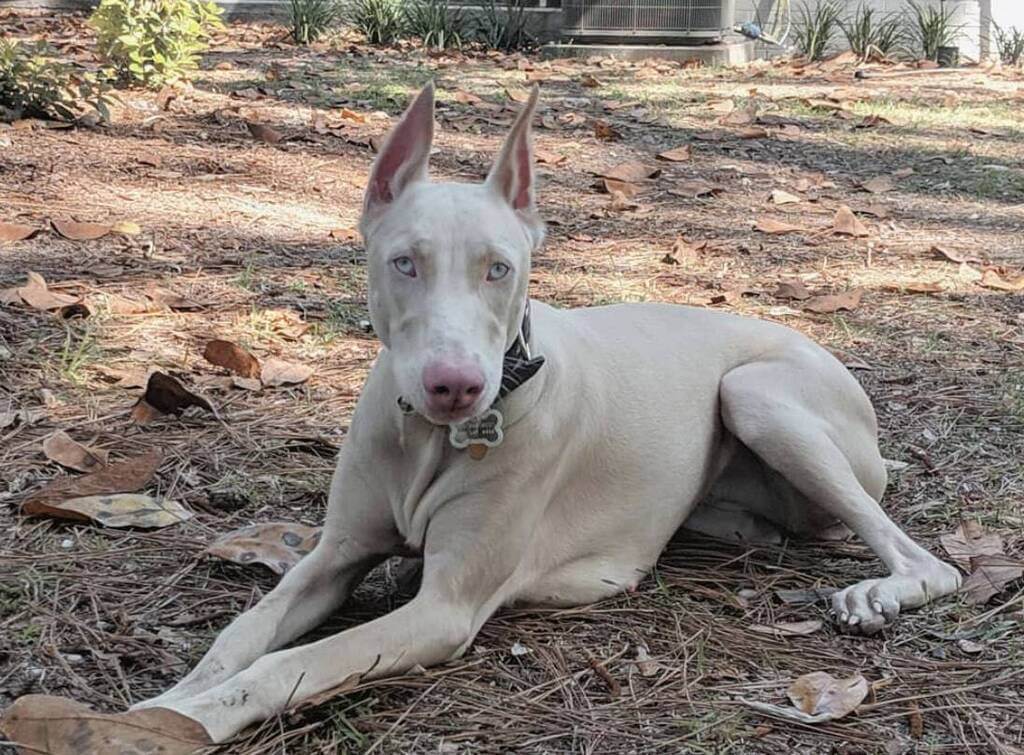 They are also termed partial albinos and suffer from leucism, which imparts the white color due to loss of pigmentation. It is an extremely rare Doberman color. These Dobermans also have pink noses, eye rims, and lips due to lack of pigmentation. Their eyes are blue in color.

White Dobermans are known to have issues like eyesight problems and alopecia. Due to poor eyesight, they tend to become fearful leading to more aggression as a form of defense.

White Doberman known as Queen Sheba was born in 1976 and most white Dobermans are known to have descended from her. There may be more white Dobermans but they are unknown as most breeders euthanized white puppies as they were considered undesirable and problematic.

There’s a lot of debate and confusion over white or cream vs albino Dobermans as I stated previously. It was believed that Sheba was an albino but many geneticists argued saying she didn’t lack complete pigmentation and thus, considered her partial albino or white. 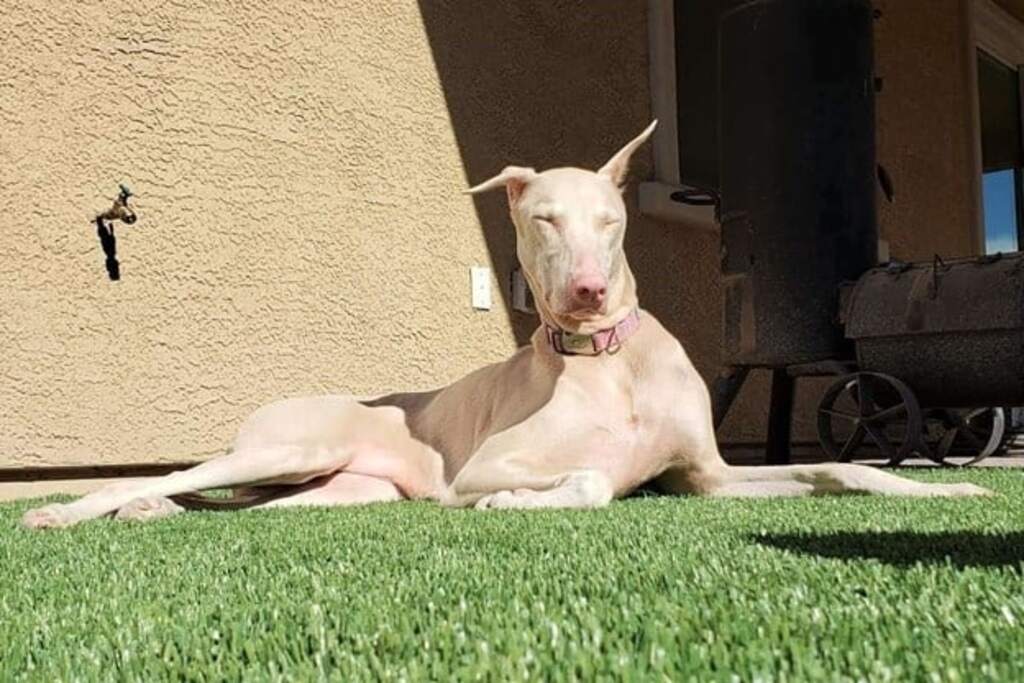 These Dobermans show a complete lack of pigmentation and are difficult to differentiate from those suffering from partial albinism or leucism. These dogs have pinkish or almost colorless eyes unlike the white variety, which has blue eyes. They also lack the cream tinge to their coat.

Albinos have a more pinkish tinge to their coats. Albinism is a health condition that not only affects the coat color but also the brain function of the dog. These dogs are believed to be more aggressive dogs due to fearfulness as well as susceptibility to diseases.

Common problems associated with albinism are photosensitivity, skin alopecia, other skin problems, poor hair quality as well as bad eyesight. Melatonin pigment may also cause problems to the kidney and liver. They are even more prone to deafness. 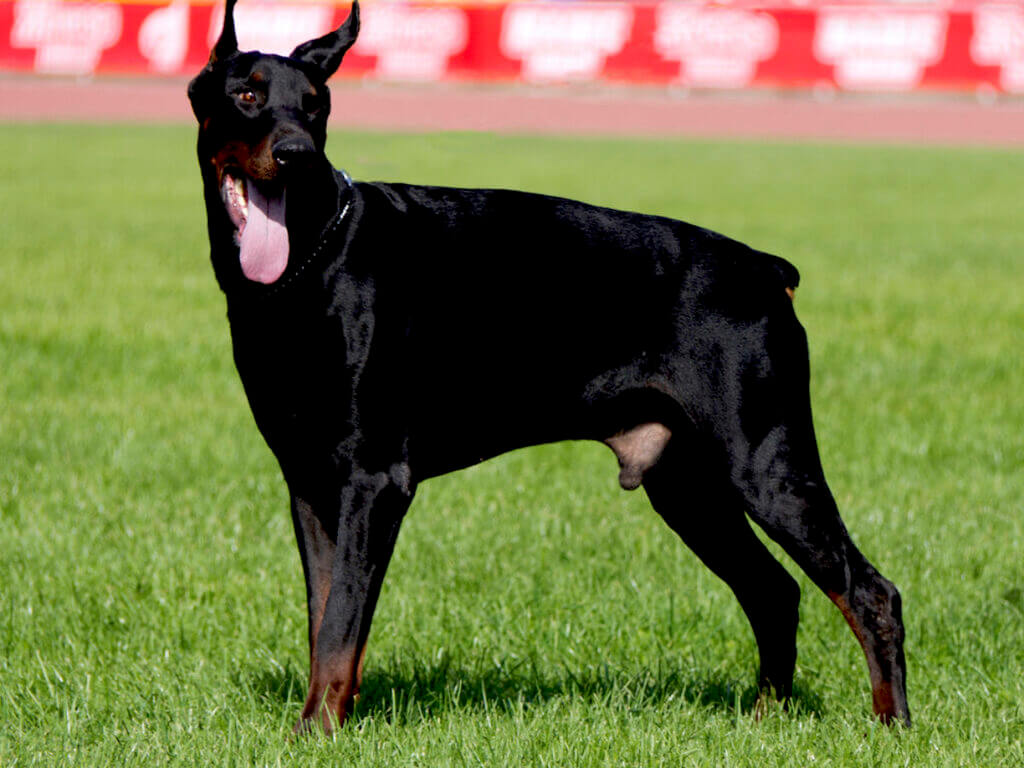 Pure black Dobermans are also known as melanistic Dobermans. They are a result of genetic mutation and not just color variation. This color is not recognized officially and shows just as many health issues as the albino Doberman.

Although some do argue that black is the strongest and most long-lived of all color varieties, there’s no study to support their claim. 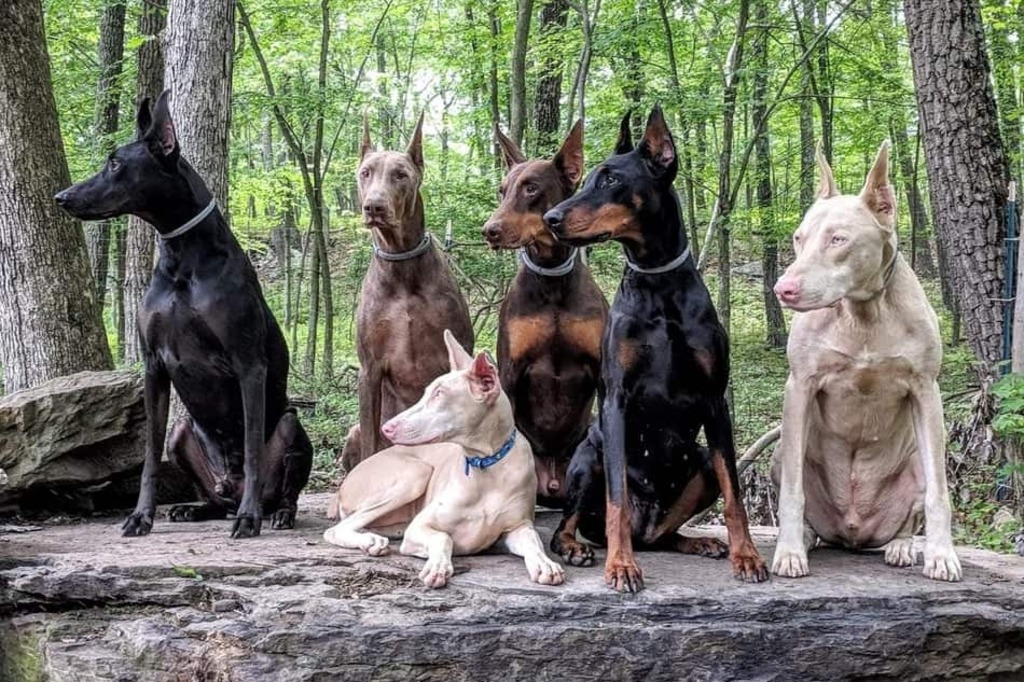 We would always suggest getting a healthy dog and giving him or her all your love and healthy and happy life rather than just getting it for its color because a black and tan dog will love you just as much as any rare colored dog will.