Labradoodle Vs Goldendoodle – What is the Real Difference?

Poodle mixes, more commonly known as “Doodles,” have become insanely popular over the past decade. These designer breeds are loyal, cute, and friendly; that’s why they’re accepted by people worldwide. These worldwide famous breeds have mixed traits of Poodle and traits of another dog breed.

Today, one of the most prevalent doodle crossbreeds is Goldendoodle and Labradoodle. These two doodle breeds are extremely loyal and friendly and have hypoallergenic coats. Because of their appearance and trait similarity, many think these two dog breeds are the same. However, that’s not true!

Goldendoodle dog breed is a combination of a poodle and golden retriever, and on the other hand, the Labradoodle is a result of breeding Poodles with Labrador Retrievers. Both have parts of Poodle, but still, both breeds have many similarities and differences.

Are you planning to get a poodle puppy but can’t decide which one to get? Or thinking about Labradoodle vs Goldendoodle: which one is best?

Today in this post, we have penned down some of the distinctive differences between Goldendoodle vs Labradoodle. We’ve covered everything from their origin and physical appearance to temperament, health issues, and labradoodle vs Goldendoodle size.

Let’s start with an overview of both types of doodles. 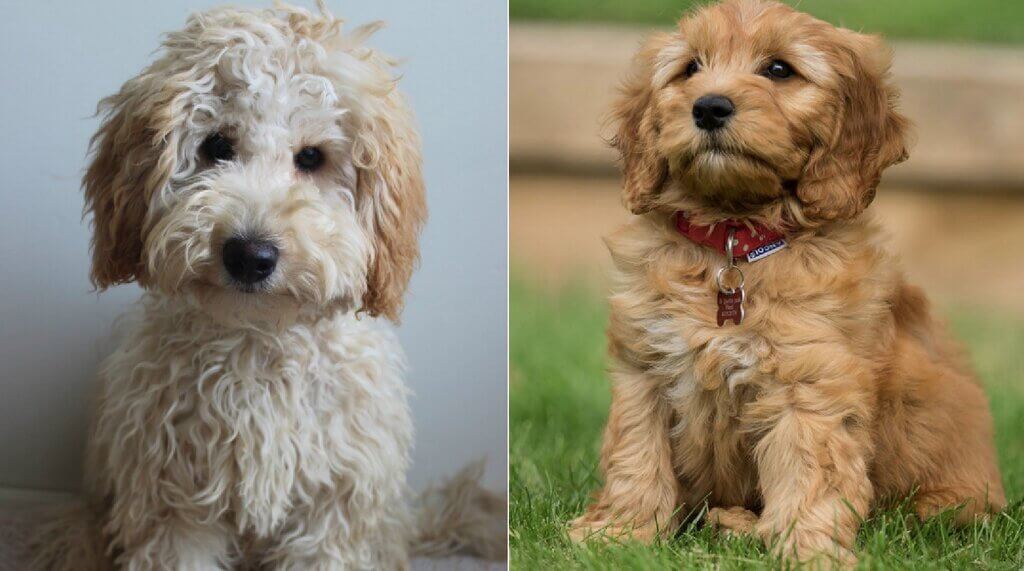 Labs are easy to train, and they love to spend time with people. They’re active and easily match the energy of their owners.

Labradoodles are sweet and social; hence they’re used as therapy dogs to treat people suffering from physical disabilities and mental illnesses such as autism and depression.

These cute dogs are loyal and adorable looking. They’re crossbred from the Poodle and Golden Retriever. Thus they have the traits of a Poodle with the affectionate and loving temperament of the Golden Retriever.

Goldendoodle dogs are sharp, active, and extremely loyal to their human companions. They are one of the best first-time pets because of their friendly and loving nature. Available in both small sizes and a standard pooch, you can get whatever fits your family’s needs.

People believed that the first ever cross between a Golden Retriever and a Poodle was done in 1969 by Monica Dickens, the great-granddaughter of Charles Dickens.

Golden and Lab may be bred from Poodles, but there is a difference in their physical appearance. We’ve summarized some of the major differences between the Goldendoodle and Labradoodle.

Here is the complete comparison table of goldendoodle and labradoodle:

Now let’s see all the characteristics and personality traits of each poodle breed in detail:

7 Key Differences Between Goldendoodle vs Labradoodle 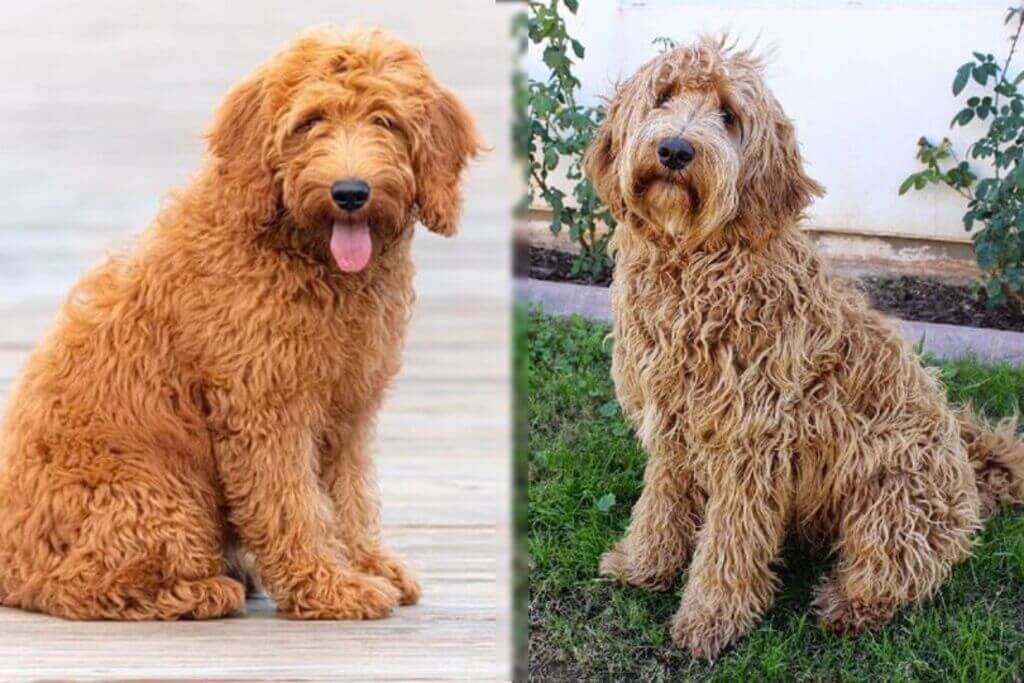 There are many notable differences between Goldendoodle and Labradoodle. We’ve explained each breed’s differences by dividing their differentiation section-wise. This way, it’s easier for you to read and understand more clearly.

Here are the top seven differences between Goldendoodle and labradoodle mix: 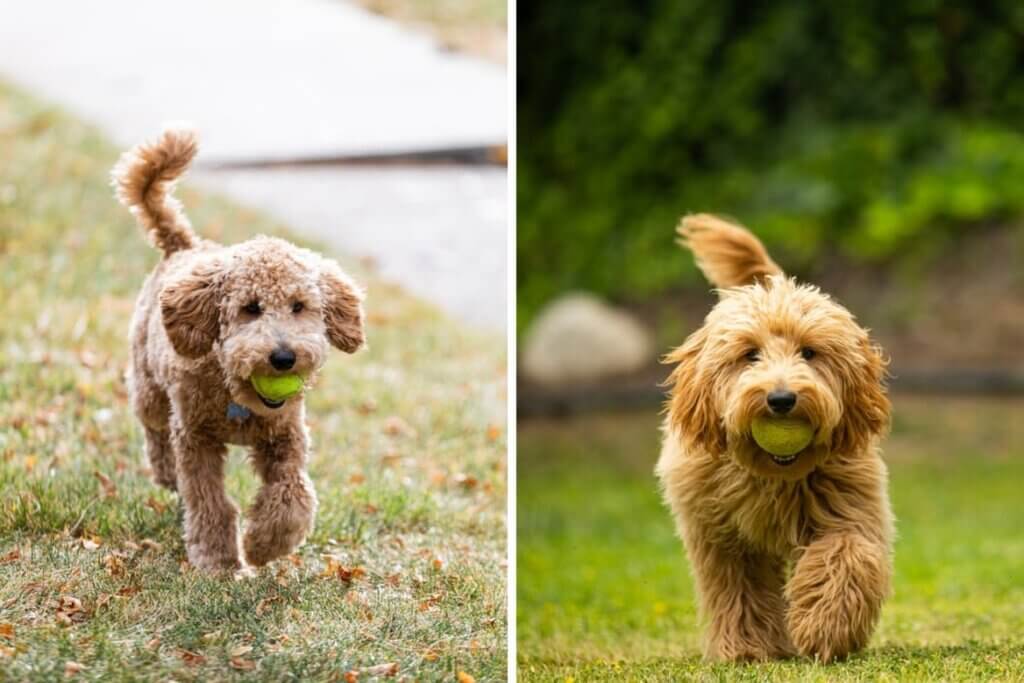 The Poodle comes in three sizes:

The first time Labradoodles were bred was in 1988 in Australia. Breeder Wally Cochran wanted a guide dog to help blind women. He tried to crossbreed a purebred Labrador and a purebred Standard Poodle to get a dog with hypoallergenic qualities and friendly traits of Labrador.

Labradoodle comes from a working background, but today white labradoodle and other ones are in both show and working varieties.

These dogs are a hybrid breed of a standard poodle and a golden retriever. It is claimed that they were initially crossbred in the late 80s and early 90s. However, there is no specific date recorded.

Poodles are well known for their intelligence and smartness, and on the other hand, the golden poodle is popular for its obedience and loyalty. So it’s pretty obvious that breeders want both these characteristics. 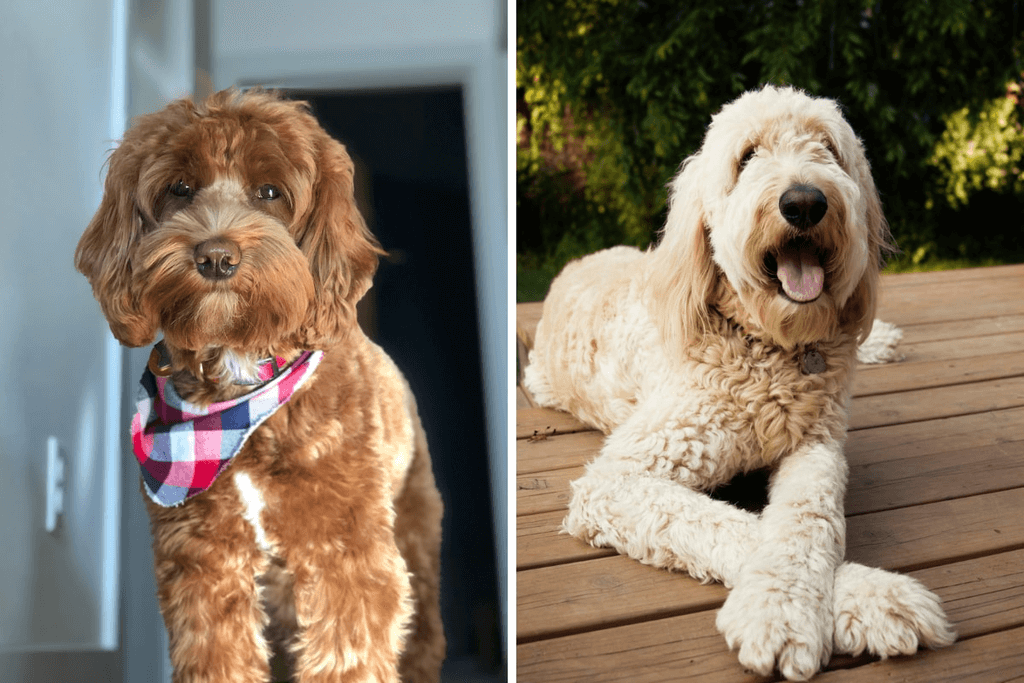 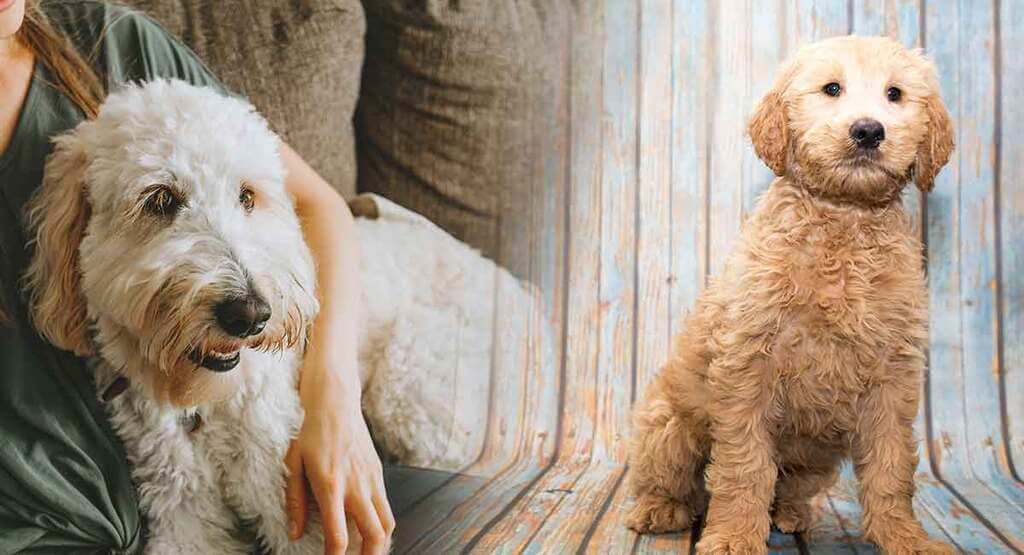 Both breeds have a double coat which is dense and fluffy. The first layer is thin and water resistant, and the underlayer is fluffy for insulation.

These canines have short, wavy, and wiry hair. Labradoodles come in so many different colors and shades of fur, such as:

As compared to Labradoodles, Goldendoodles have long curly and wavy hair. These dogs are also available in many color options but less than the Labradoodles. They come in different coat colors and shades, including 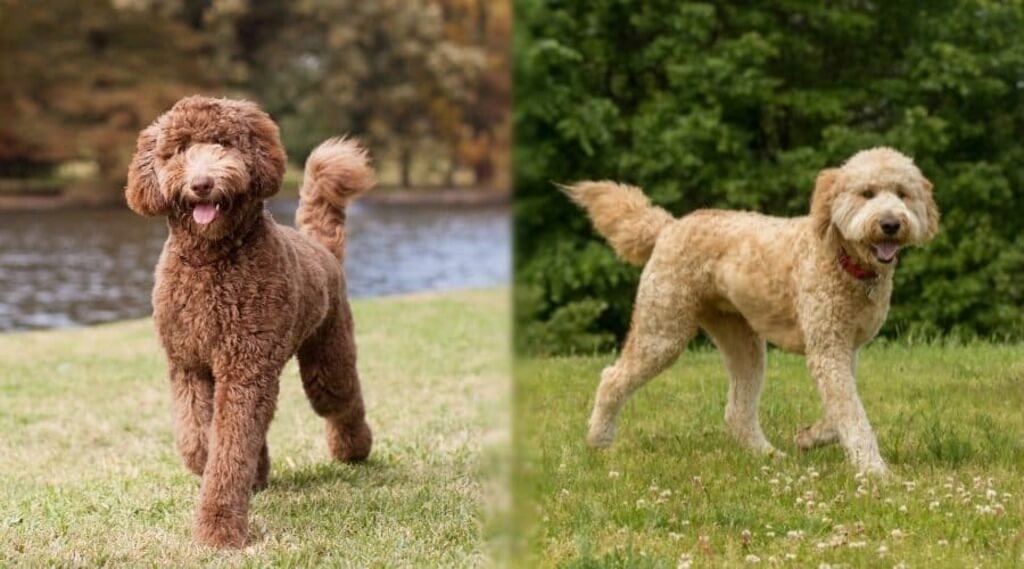 Labradoodle is heavy and usually has shorter, wirier fur that comes in so many colors and shades, including cream, white, yellow, and sometimes black. The first generation of this breed (50% Lab and 50% Poodle) shed their coat more often. Golden labradoodles have shorter muzzles with furnishings around the mouth.

These dogs have a distinct teddy bear look like a goldendoodle that can make anyone easily fall in love with them. Like Labradoodle, they also have furnishings around their mouth but longer muzzles.

F1B Goldendoodles and F1b Labradoodles have a more refined and Poodle-like look, and they also shed less. 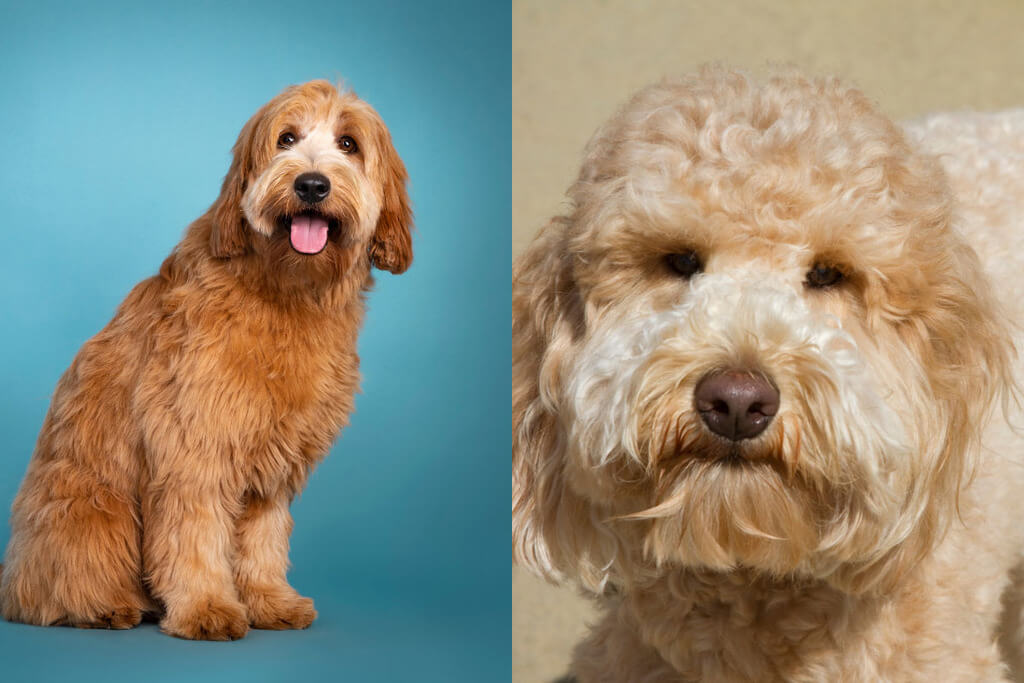 There are also differences in the temperament of both breeds. However, both breeds are considered loyal, loving, and friendly pups. You can select the one according to work or activity such as hunting, service, therapy dog work, etc.

Do you have doubts, such as are Labradoodles boisterous? Or are Goldendoodles hyperactive?

Labradoodles are friendly, affectionate, and highly energetic dogs. They’re also stronger and more active and playful than Goldendoodles. These traits make them perfect for hunting or farm work, or public service. They’re also great family pets, and many people choose them for a service dog, guide dog, and seeing eye dog work.

Goldendoodles dogs are also affectionate, kind, and fun animals who love to spend time with their owners. They are calm but really sociable and like interacting with strangers and pets.

They’re not as hyper as Labradoodles but surely fill your life with happiness. Because of all these characteristics and peaceful temperament, these canines are preferred for therapy and hospital/nursing home work.

Here’s a comparison table of labradoodle and Goldendoodle mix traits: 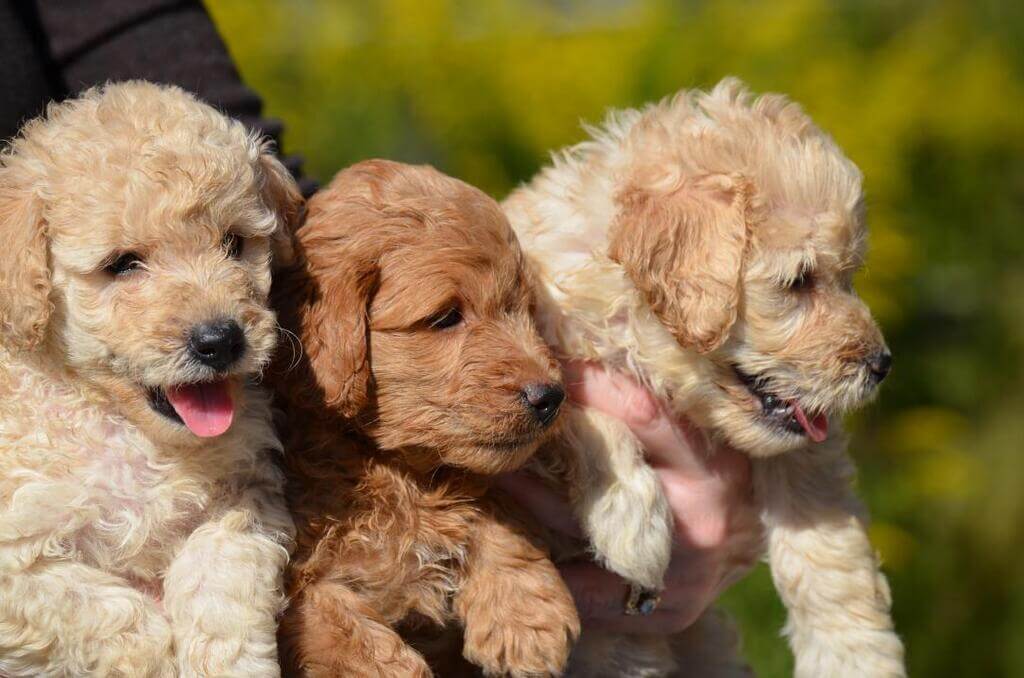 Whenever anyone decides to add a dog to their family, lifespan is also one of the important factors. After all, we all want to know which breed will be with you for how long.

A study done in England on the lifespan of dogs suggests that Golden Retrievers and Labrador Retrievers actually have the same average lifespan of 12.5 years and Poodles have 12 years of lifespan.

So, the average lifespan of Goldendoodle and Labradoodle is about 12 years! 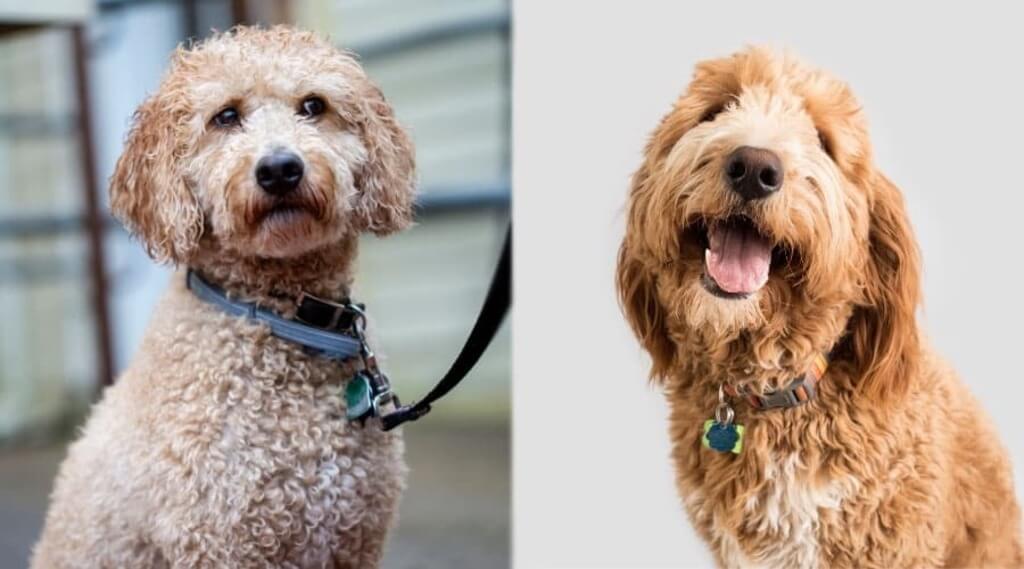 Which dog breed is healthier, Labradoodle puppy or Goldendoodle puppy? Do both have the same medical issues, or does one have more?

Their parent Labrador Retrievers are more prone to some health conditions, including

Poodle is prone to

Golden Retrievers are prone to certain issues such as:

So both Labradoodle and Goldendoodle can inherit the above health conditions from their parent breeds. So, it’s important to adopt or buy puppies from a reputable breeder with no history of health issues.

Do you want to see various varieties of Goldendoodle and labradoodle mix puppies? If yes, scroll down! 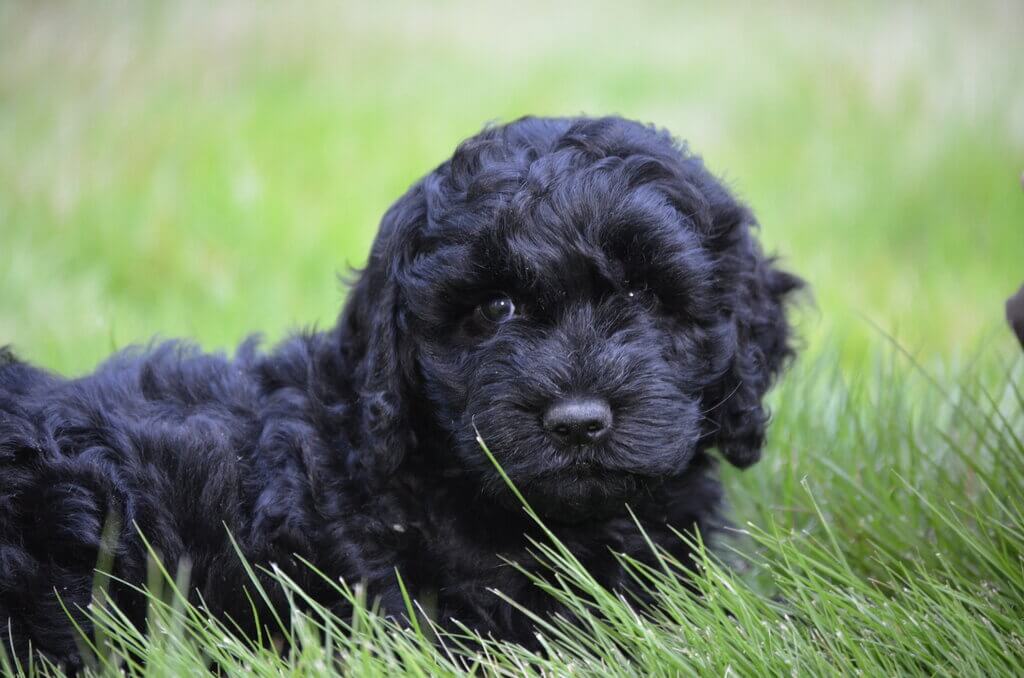 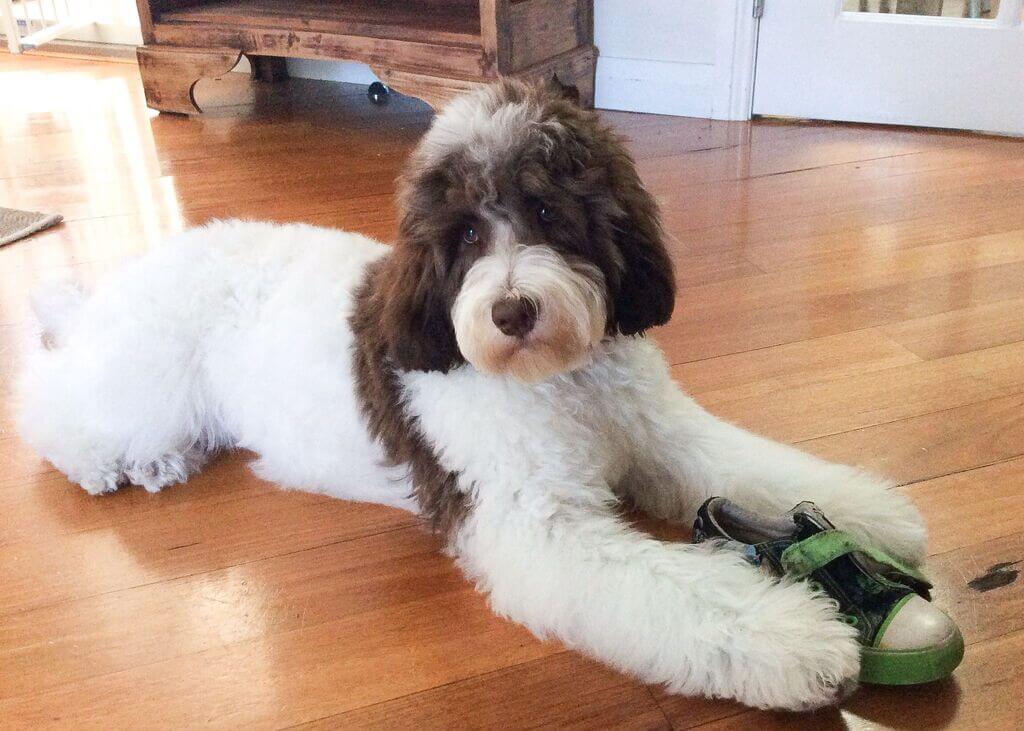 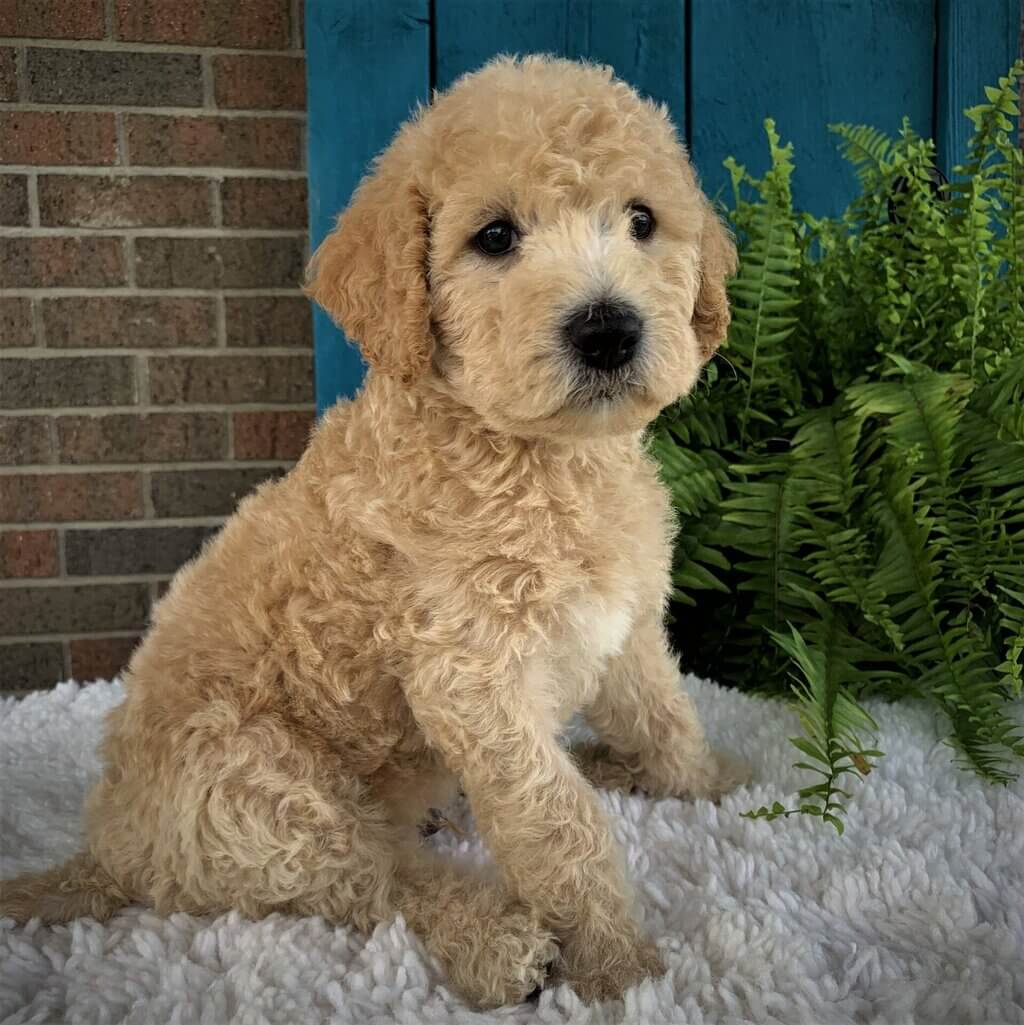 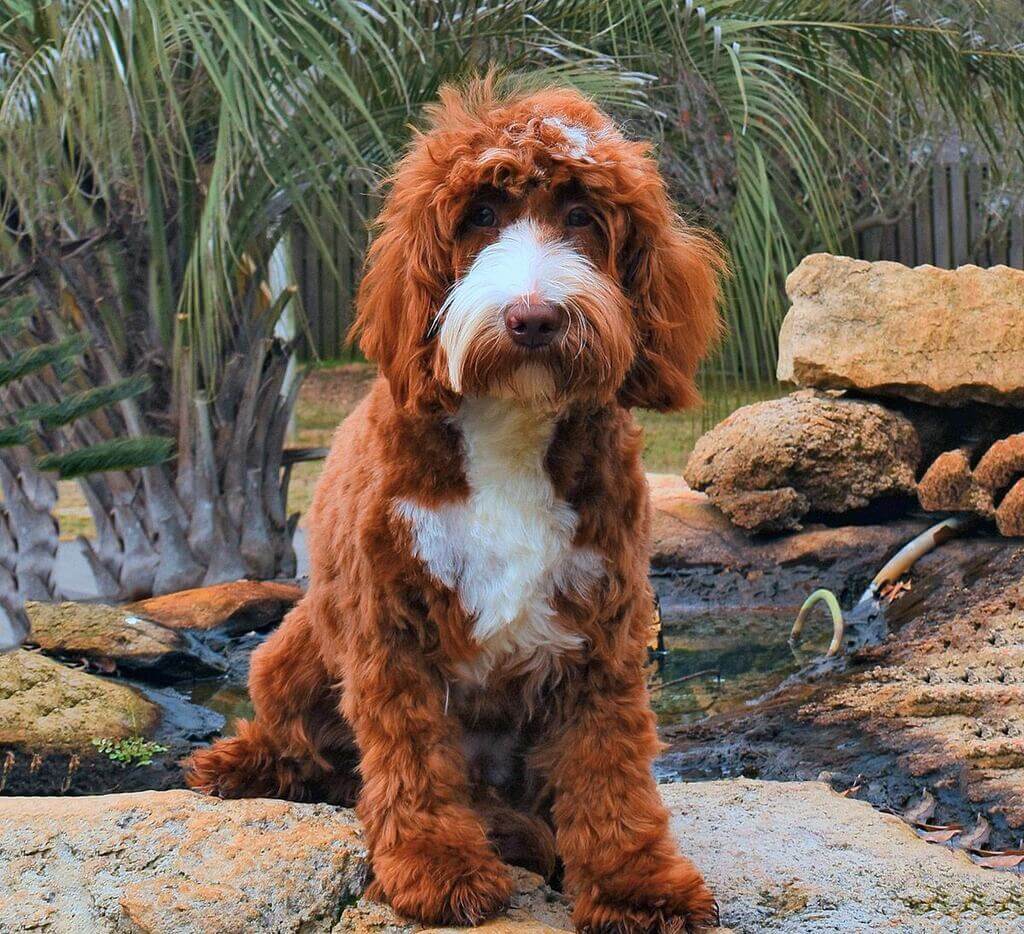 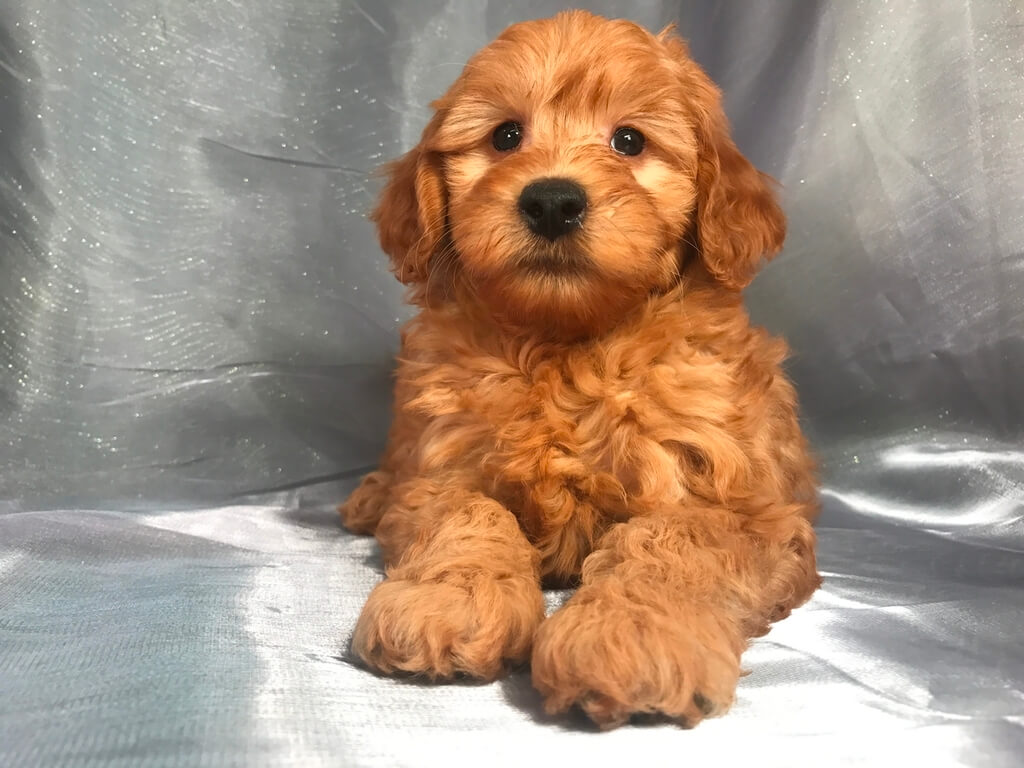 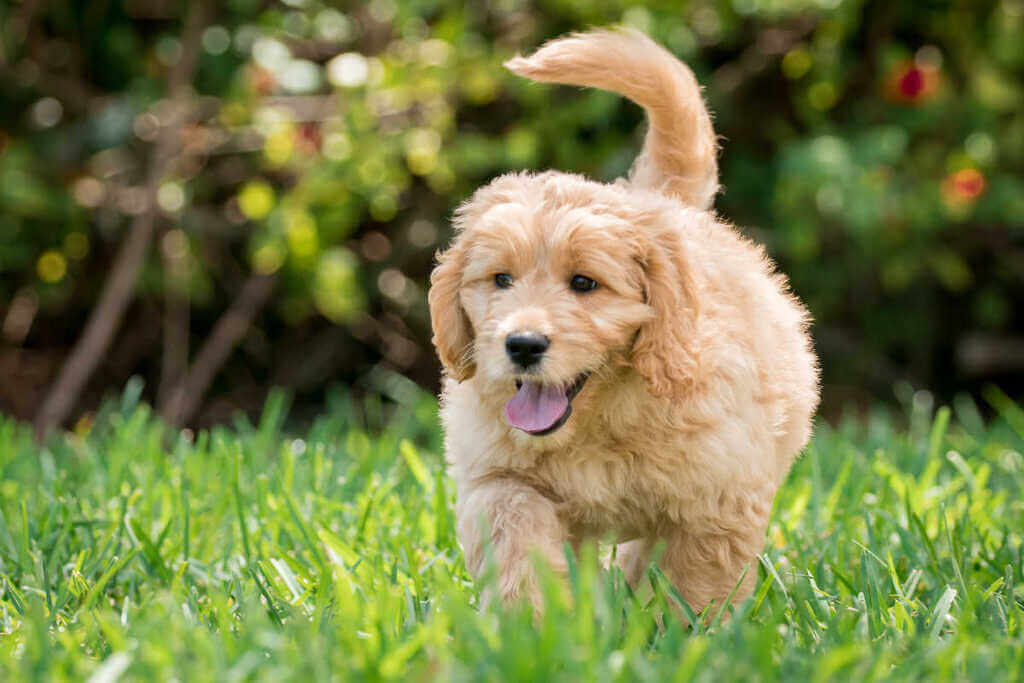 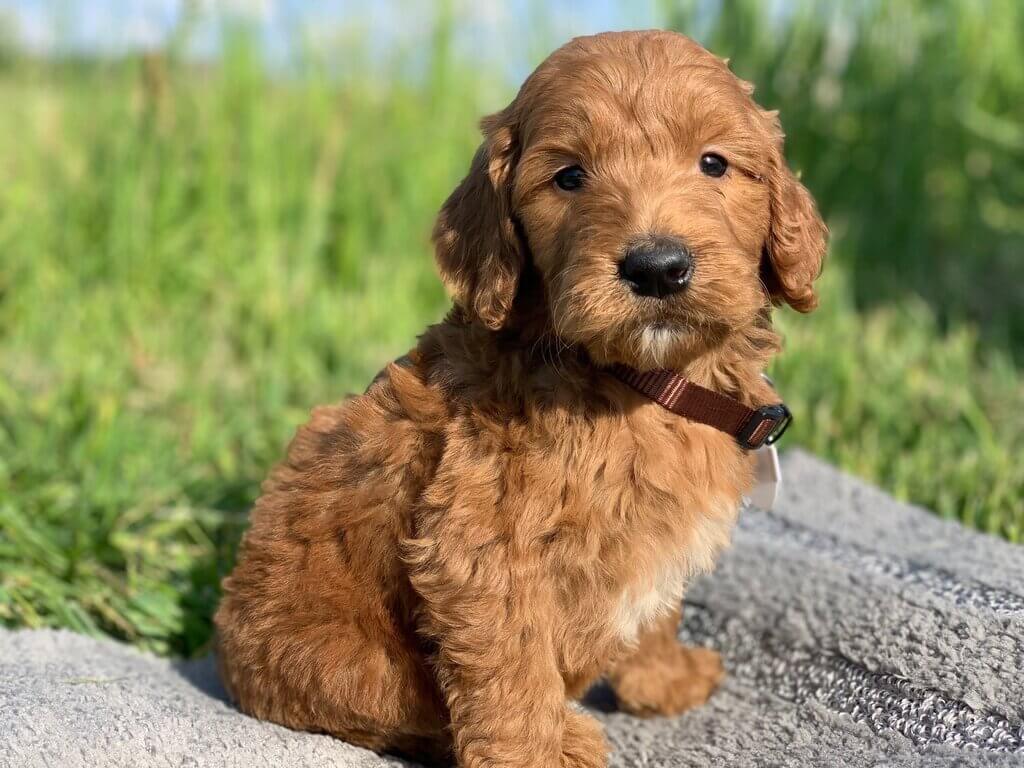 You can also check out other doodle and poodle breeds such as Full Grown Sheepadoodle, Full Grown Bernedoodle, Mini Goldendoodle, and Cavapoo Dog Breed.

Labradoodle vs Goldendoodle: Which One is Right for You?

Both labradoodle and Goldendoodle are active, affectionate, and loving dogs. Thus, both are great family pets. However, both need regular grooming and exercise to keep them healthy and happy!

So now it’s up to you to decide whether Goldendoodle or labradoodle is good for your family. Select the breed according to your lifestyle and requirements. So this is all about Goldendoodle labradoodle.

I hope this in-depth guide on Labradoodle vs Goldendoodle has provided you with all the required information to decide which one to get from labradoodle puppy vs Goldendoodle. So, if you find this guide informative and helpful, please share it with your friends and family looking for doodle dogs.

Do you want to read more about other dog breeds and animal comparisons? Check out our previous blogs on Belgian Malinois Vs. German Shepherd, American Vs. European Doberman, Alligator Vs. Crocodile, and Falcon Vs. Hawk.