Another small variety of Aussies is the toy Aussie dog, toy Aussie shepherd, or the mini toy Aussie. Toy Aussies are even smaller than miniature Aussies. The toy Aussie is known as Teacup Aussie, Teacup Australian shepherds, Teacup Mini Aussie by a lot of people.

Australian shepherds are alert and affectionate herding dogs that make amazing companions. They are such smart breeds that they can even be trained to help you with small chores around the house.

The smaller varieties share most of the traits, the only difference being their height. So let’s get to know these cute little Aussies better. 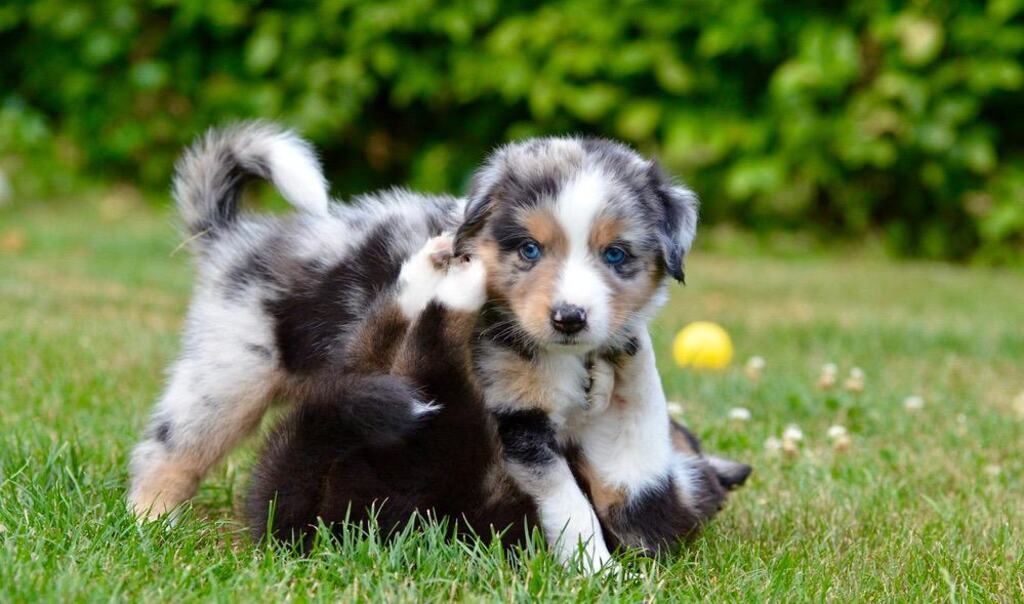 The mini Aussie dog was used for herding flocks of sheep. They are alert and use their barks and nips to keep flocks of sheep together. They are energetic and active dogs who enjoy their work like it sits and plays.

To date, the Aussies enjoy learning small tasks and helping their humans around the house. The mini Aussies came into existence as breeders began to breed a separate line of dogs for their smaller size which eventually gained recognition as a distinct breed.

Mini Australian shepherds are known to be rodeo dogs working alongside ranchers and cowboys. Many people believe that Aussies came into existence by mixing shepherd dogs with collies when they came in with shipments of sheep from Australia to America during the 1800s.

The standard Australian shepherds are the biggest variety of Aussies. They need at least 40 minutes of vigorous exercise daily to be fit and happy. Males of this variety stand 20 to 24 inches tall, whereas the females are 18 to 22 inches. 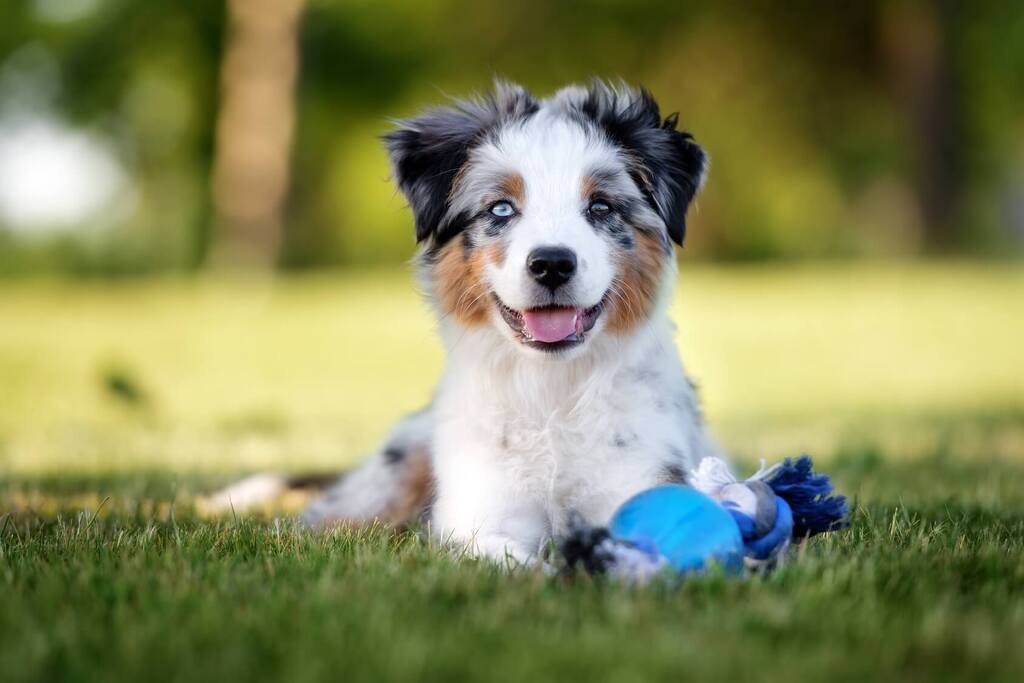 These are the smaller variety as compared to the standard Australian shepherds. They stand 15 to 18 inches tall and weigh between 25 to 40 pounds. You can also check this out about small pet dogs if you are planning to buy. 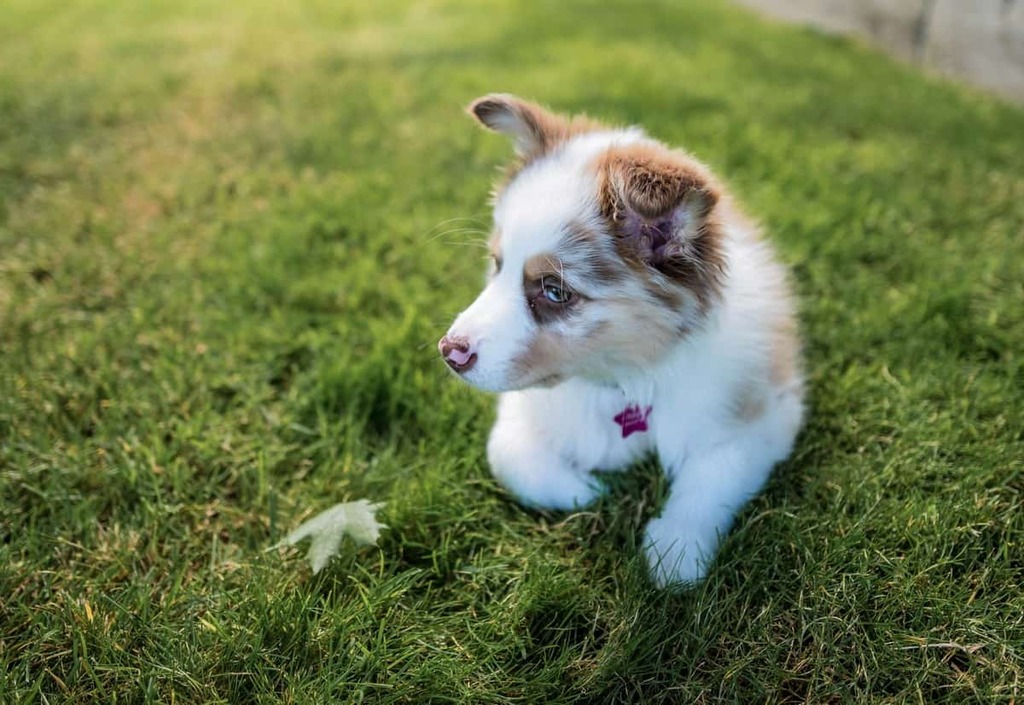 The toy Aussie dog is an even smaller variety with dogs of 10 to 14 inches in height and 6 to 20 pounds of weight. They are bred by selectively breeding the smaller mini Aussies. The toy Aussies are also referred to as teacup Aussies or teacup Australian shepherds.

NOTE: Many breeders get smaller-sized Aussies like the teacup Aussie or toy Aussie by breeding runts of the litter. Runs are the weakest puppies of the lots who have low immunity. This can produce unhealthy pups. Make sure this isn’t the case when you decide to get a small-sized Aussie.

Bred to dominate and guide sheep, they tend to take the role of leaders in the house. Proper training and guidance is a must to not let them take charge. This can be a bit challenging for novice owners.

They are lively, playful, and protective dogs who are loyal to the core. But the same qualities may make them vary from unknown people and strong animals, thus early socialization is a must.

Socialization helps the dog have the power to have easier communication and outdoor time. Aussies are focused and hard-working dogs who love working just as much as playing. 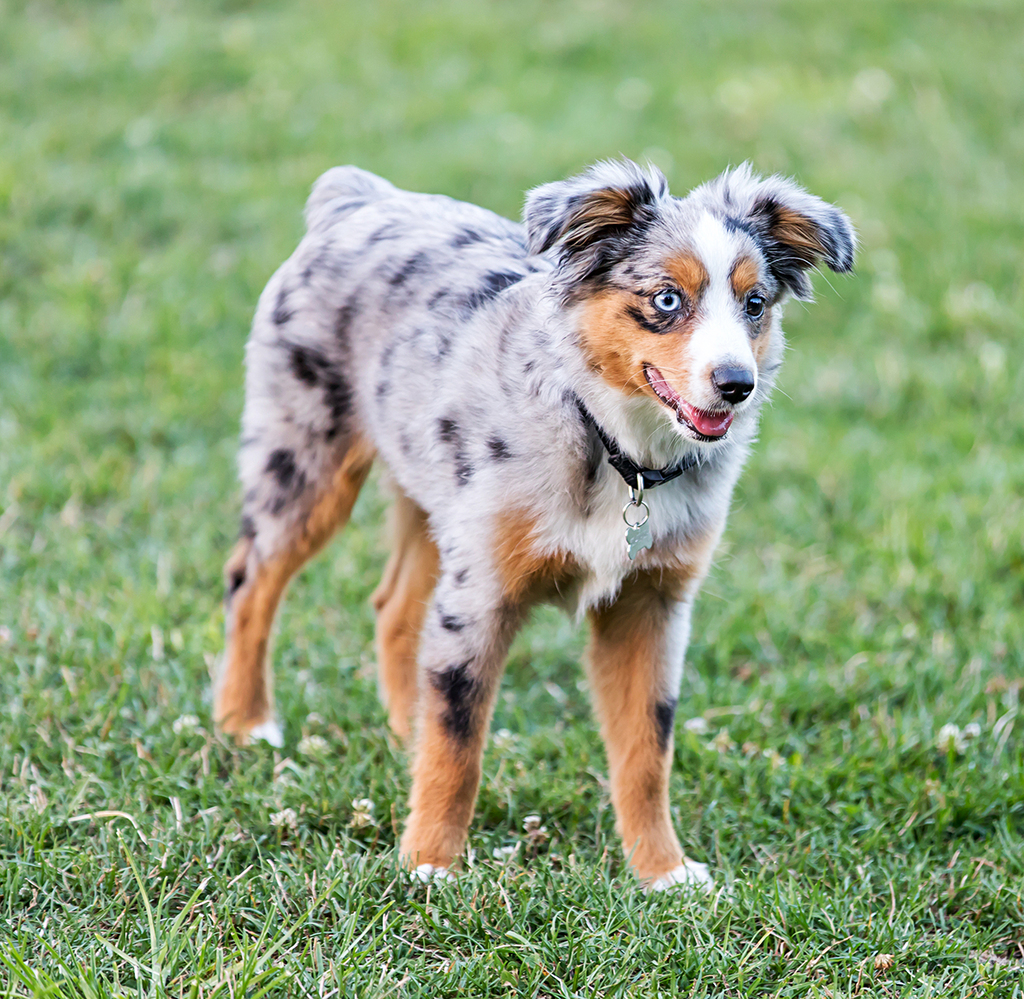 They have a muscular body with a broad chest and their eyes are bright and attentive. They can have brown or blue eyes. Heterochromia wherein both eyes have different colors is pretty common among these dogs.

Their coat has a dark base color with light-colored patches with a white belly and chest. The common base colors for Aussie shepherd dogs are reddish-brown or black with tan, beige, and white patches on the fur.

Merle mini Aussie shepherds are a more sought-after variety with a mottled appearance on a red or black base color coat, this makes the base color seem lighter. The black base in the merle pattern appears bluish-grey and these dogs are referred to as blue merle mini Aussies.

The breed has a double coat which protects the skin and keeps them warm in colder climates. Their outer coat may be straight or wavy with short or long hair types.

They are easy to groom and need two to three times brushing every week. Only during the shedding season, their coat needs to be blown off daily as they shed their undercoat. You can brush them using a firm bristle comb.

Always check their coat for ticks and fleas, ask your vet for help if you find a few of them chilling on your dog.

They need a bath only when they roll in dirt or smell fishy, other than that they are good to go and may only need to be bathed once a month or once in two months.

Make sure to maintain the dental hygiene of your miniature Aussie or toy Aussie shepherd as negligence can lead to periodontal and gum diseases. Brush them daily or provide them with dental chews. You can also mix tartar removing powder in their food or water if they give you a hard time while brushing their teeth.

Nails must be trimmed regularly along with cleaning of eyes and ears.

The Miniature Aussie Shepherd is an active dog who needs 60-90 minutes of exercise daily. They love to have a vigorous exercise or play routine. These dogs love to jump around and chase things, thus keeping them on leash in a non-fenced area is recommended.

They love to train and catch up quickly due to their intelligent and enthusiastic personality. They can be taught tricks that would be used to help you around with daily tasks.

Never use punishments or harsh methods to train your dog as this will make them associate training with a negative experience. Rewarding and positive reinforcement must be used to make your dog love the experience and develop a bond with you. 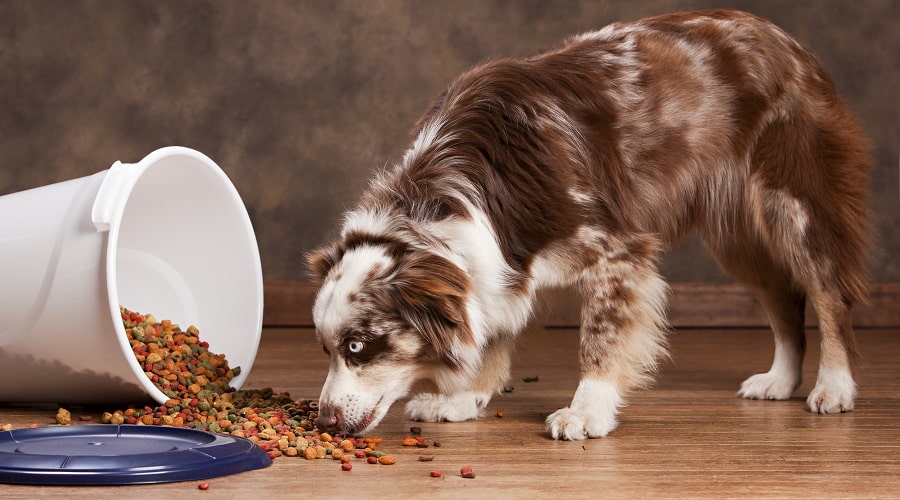 Miniature Australian shepherds need around 800 to 1200 calories a day. You can follow the instructions on their commercial food and feed them accordingly. Divide the total food into 2 or 3 portions for easier and better digestion.

You must never overfeed or underfeed your dog as this can have a deteriorating effect on their health. If you decide to give them home-cooked meals, refer your vet for the formulation of a balanced diet based on your dog’s size and activity levels. 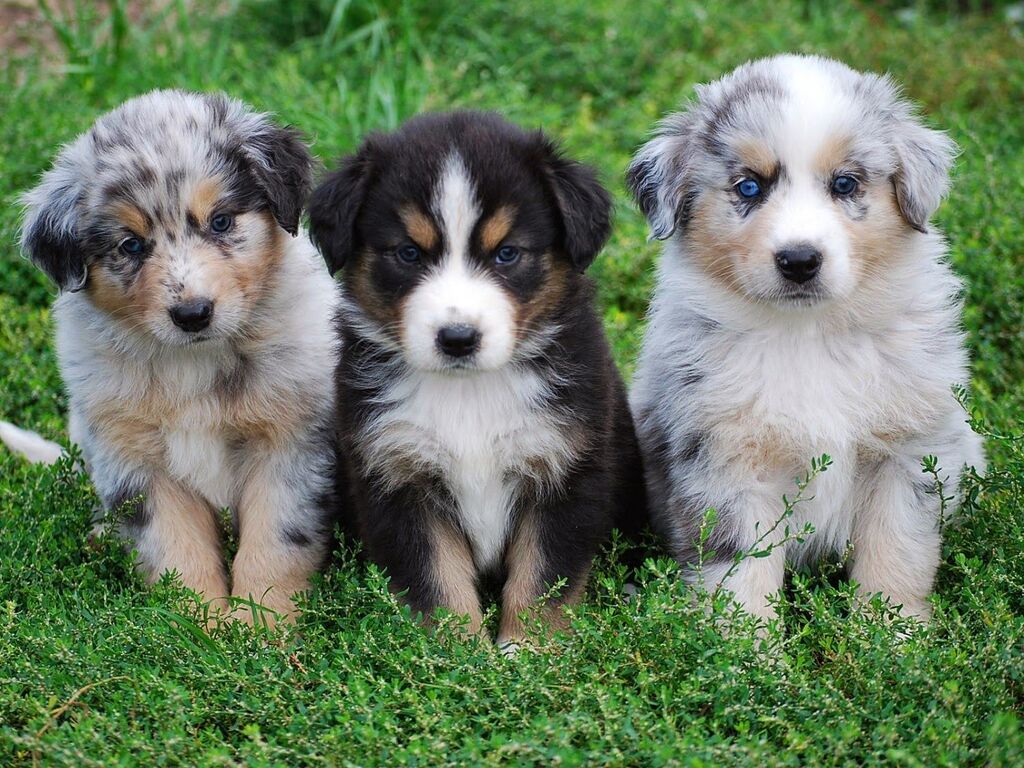 Mini Aussie puppies AKC mini Australian shepherd puppies are boisterous little cuties that are suitable for apartment dwellers as well as people with a large backyard. The easygoing and playful puppies, packed in a small size. Although they may be a little shy around strangers so make sure you socialize with them early on.

While buying miniature Australian shepherd puppies, toy Aussie pups, or even teacup Aussie pups ask the breeder to show you the breeding place, parents of the dog, conditions of the kennels, etc. if the breeder is hesitant to share this information with you, it’s a red flag.

Many breeders try to sell the runt of the litter, claiming them to be miniature Australian shepherd puppies or toy Aussies and teacup mini Aussies.

While deciding which Aussie puppy to get home, you can consider the size of your house as larger dogs require more room to play and live, whereas a lap dog would live and play happily in a smaller space.

The Mini Australian Shepherd price ranges between 1000$ to 1200$. You can expect a higher price for the more sought-after color like Merle. The price also depends on and varies based on location, the reputation of the breeder, quality of breeding, and pedigree of the dog.

Mini Aussie shepherds are generally healthy breeds of dogs but all breeds are genetically prone to some diseases and Aussies are no exception. Don’t worry, your miniature Aussie might not get any of these, we are just giving you a heads up on what conditions to look out for.

Buying from a good breeder who gives a health clearance of both the puppy parents reduces the chance of your mini Aussie puppy getting these genetic issues.

If you want a little dog with a big dog personality and energy the mini Aussie shepherd is the dog for you. They are lively and fun-loving dogs that will light up your house with joy.

You will have a friend for life in your mini Australian shepherd, who will be watchful and protective. The best part is they are fit for people who live in apartments in big cities and cannot have a backyard for their dog.

They aren’t the dogs for people with a sedentary lifestyle, if you’re an active, adventurous person these babies will happily be your companion. They aren’t as big as the standard size so they require a little less space and exercise too.

So if you feel ready to take up this responsibility and are willing to commit, there’s nothing that can stop you from making a new best friend who’ll join in on all your adventures.