Can Turtle Survive Without Shell? All You Need to Know

133 views
Table Of Contents hide
1 What Is a Turtle Shell Made Up Of?
2 How Did Turtles Get Their Shells?
3 Functions of the Tortoise or Turtle Shell
4 How Does the Shell Grow?
5 How Sensitive Is the Shell?
6 Healing Capacity of Shell
7 Final Thoughts

Or what does a turtle look like without a shell?

There’s a lot of curiosity among people when it comes to these questions. The simple answer to the former question is NO, a turtle with no shell cannot survive.

Thinking about turtle without shell and questioning if they’ll survive is like asking if a human would be fine without their skin. Sounds ridiculous right?

But we understand why people may think so. Many shelled animals like giant African land snails or hermit crabs can be seen doing fine without their shells which makes the idea of a turtle out of shell, possible in people’s heads.

Then why isn’t it possible? Unlike many other shelled animals, the shell of a turtle is a part of its body and it cannot be separated from them. To understand why a shell less turtle won’t survive, we first need to understand the role of a shell and how it is synonymous with the turtle, not a separable part.

Shells play a role of a mobile shelter for most animals, for them, it is just a home that they can carry along with them wherever they go. But for turtles, it is not just a mobile home, it is a part of their body and turtles and tortoises are among the ONLY animals that have shells as a part of their body.

Their shells not only protect them from predators and the environment but also support many physiological functions in their bodies. This is why it’s impossible for a shell less turtle or a turtle without shell to survive. So let’s get to know the shell better to understand its vital role.

What Is a Turtle Shell Made Up Of? 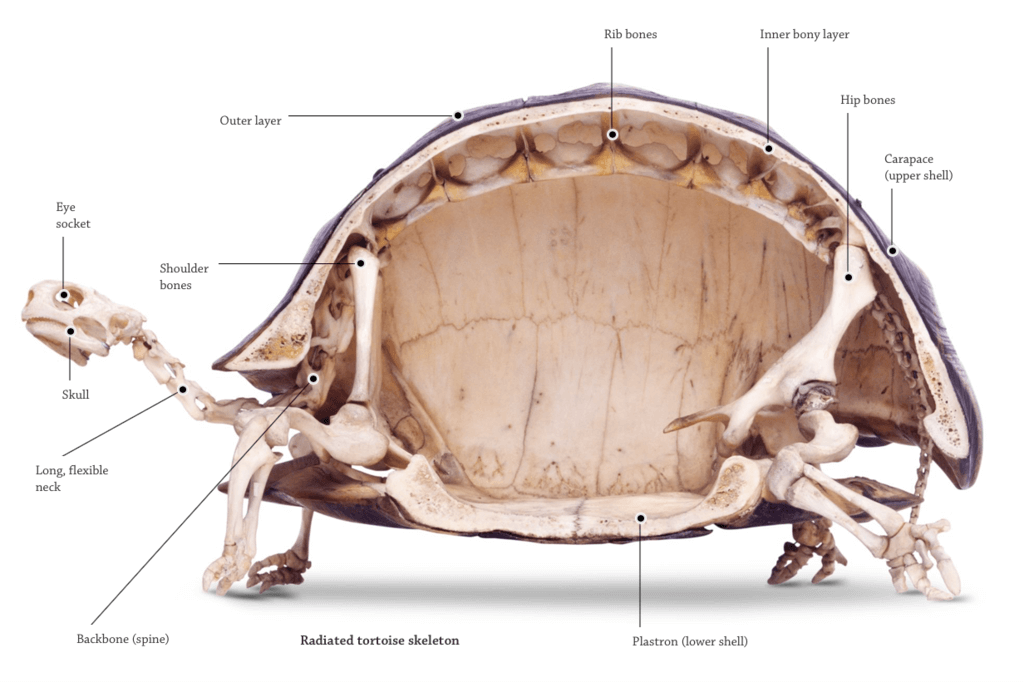 The two main components of the turtle shell are Carapace and plastron.

Together they provide protection to the vital organs. The carapace plays a very important role as the spinal cord and ribs are a part of it as they are built into the carapace itself. This should give you a clear idea about why a turtle with no shell is like a human with no spine, which is impossible for survival.

The turtle shell also has nerve endings which means any damage or harm to it can be felt by the turtle.

Plastron or the base provides protection to a turtle’s heart and lungs. The shell is covered with scales in many species and it makes the turtle shell as tough as bones but the shell’s job doesn’t end with protection, it performs many vital roles. One of the major doubts is when and how did the turtle shell come into existence?

How Did Turtles Get Their Shells?

The question is ‘how, why and when did turtles develop shells?’ has been under debate in the scientific community for a very long time but there still isn’t a confirmed reason or answer to it.

Scientists initially believed that the shell was just an extension of a turtle or tortoises’ backbone and ribs but later discovered that there’s much more to it.

The shell of a turtle or tortoise also incorporates its external bony structure. According to some theories, it is believed that the first turtles known to have existed were shell less turtles, their ribs eventually began to broaden and they eventually formed the basis of shell development.

But this theory has a loophole as evolution favours factors that benefit the animal and aid in survival. Broadening ribs in a turtle would do none of it and on top of it make it harder for the animal to survive by creating difficulty in moving and breathing.

Some evidence related to the turtle shell or a sea turtle inside shell was discovered, which suggested that the two parts of their shell, that is the carapace and the plastron did not develop at once. They came into existence separately and served different purposes.

The oldest turtle fossil discovered dates back to 220 million years and is known to have just the plastron. This is suggestive of the plastron (bottom part) coming into existence much before the carapace (top part) but it is heavily questioned and highly debated upon to date.

So we can leave this up to the scientists and until they figure out the history and evolution, we can dive into some facts and get to know the turtles better.

Functions of the Tortoise or Turtle Shell 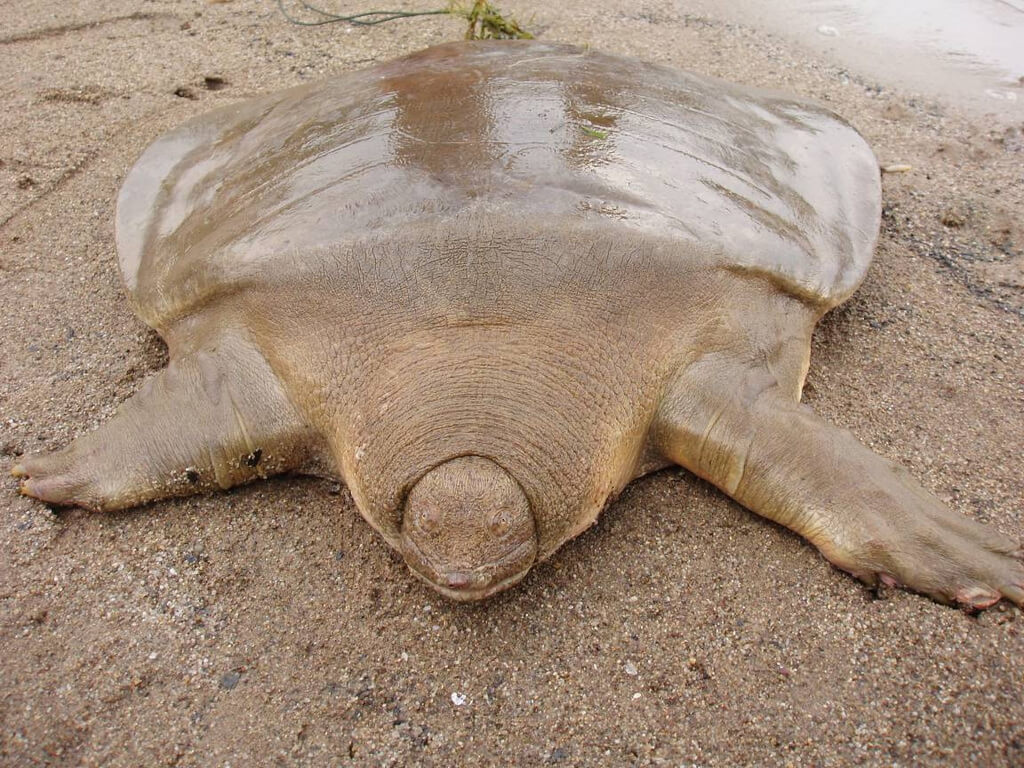 the most common and well-known function of the shell is to provide protection. Tortoises or turtles can slide their head, tail and all fours into their shells completely when the situation is not favourable, this way they can keep themselves safe and sound. A sea turtle inside shell does the same for its protection.

The shell not only protects the turtle from harsh weather but also from attacks and even bites of predators like dogs, foxes, birds, and other serious injuries. Thus, a turtle out of shell or a turtle with no shell would be more prone to prey animals as well as injuries.

Smaller turtles need to hide themselves better to stay protected as they are easier prey due to their size and comparatively softer shell.

Fun Fact: a bite of an alligator can crush the largest of animals but the shell of a turtle can withstand its force.

The turtle shell also acts as a reservoir for the storage of minerals like potassium, sodium, calcium, magnesium and so on. It also stores fat, water, carbon dioxide and metabolic waste.

3. pH buffer: it also helps in even supply of oxygen and other essential molecules throughout the body, by maintaining the blood pH is less acidic.

4. Agility: their shell also aids their agility. It helps them burrow and go into hibernation to protect themselves when conditions are favourable or to find food or lay eggs. Their legs aid in burrowing too but it is their shell that keeps them protected during the hibernation period. The aquatic species also benefit from their shells. As they have more smooth, leathery and streamlined shells, it aids them to cut through the water and swim at higher speed.

Some softshell turtles have evolved to lose the hardness of their shells and have exposed skin but this only adds to their speed in the water.

5. Camouflage: many species protect themselves from predators by blending themselves into their surroundings and using nature as a defence mechanism. Turtles and tortoises are no exception to this.

Most turtles will have markings that have evolved to match their surroundings and keep them protected.

How Does the Shell Grow?

Even the soft shell of a hatchling provides it with good protection and gives it a fair shot to grow into an adult. Like snakes or many other such reptiles, turtles and tortoises do not moult and lose their shell before growing a new one. They are born with shells and they have it for life.

The shell grows along the rest of their skeletal system as it is a part of their exoskeleton. Shells may differ from species to species depending on their major role, environment, etc.

Sea turtles have a softer and leathery shell whereas land turtles or tortoises have more thick and rounded shells, covered with plates, known as scutes. Turtles shed their scutes over time but tortoises show overlapping, they do not shed their scutes.

How Sensitive Is the Shell? 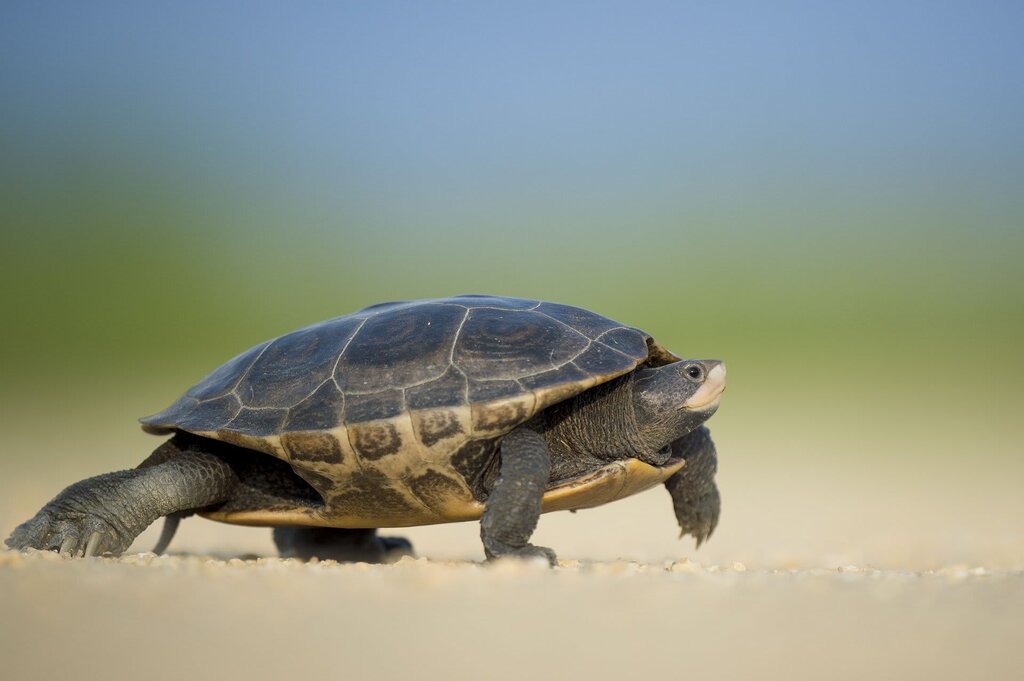 Well, it’d hurt if you broke your arm, right? As the bone is a part of your skeletal system. In the same way, if a turtle broke its shell, it would feel immense pain and there are nerve endings in and around its shell.

This also means that when you touch the shell, your turtle can feel it. So never ever attempt to pull the shell off or do anything that you wouldn’t do to any of your own body parts as it will cause unbearable pain and you may even lose your pet.

Also Read: How to Create a Perfect Box Turtle Habitat in Detail

Just the way our body heals, our broken bones join, the shell of a turtle can heal on its own. Although if left untreated, to heal on its own, the shell may not heal perfectly or regain its look as before it’ll be enough for survival if it is not intervened by any secondary infection.

We suggest you take your turtles to a vet if you notice even a slight injury to their shell. As you all know, a stitch in time saves nine.

Another curious question we often get is, ‘what does a turtle look like without a shell?’

You can google ‘what does a turtle look like without a shell?’ if you are strong-willed and do not get disturbed easily but we advise you against it. Why would you even want to know what they look like if they can’t even survive without it?

Because the answer to “what does a turtle look like without a shell?” is that it’ll look wet, red and dead. (much like a skinless human or one without the skin as well as a spine, maybe.)

A turtle without shell is as good as dead and it is not a pretty sight.

Common problems related to the shell of a turtle:

If you observe any of the above-mentioned issues, please consult your vet immediately.

Now that you know how important the shell is for a turtle or a tortoise and what role it plays, it must be clear that they wouldn’t be able to survive without it and in fact die a painful death. So please do not attempt anything even close to separating them from their shells.