In Ancient Aztec, Axolotl roughly translates to ‘water monster’ as it is believed that the Axolotl is Xolotl, an ancient god of lighting and fire who disguised himself as a salamander to avoid being sacrificed.The cool legends aren’t the only interesting things about these Amphibians, they are pretty fascinating in other ways too. These Mexican amphibians are paedomorphic salamanders that have the ability to regenerate their lost organs and to easily accept transplants from other Axolotls without risk of rejection, this makes them of interest to scientists.

They also manage to stay young throughout their lives and are related to the Tiger salamander.

The Axolotls pronounced as ‘ACK-Suh-LAH-tuhl’ exhibit a phenomenon known as neoteny which is a bit different from the simple metamorphosis that is shown by salamanders. These amphibians, unlike the other salamanders, never grow out of their juvenile stage and remain as larvae throughout their life.

And the list of fascinating features doesn’t end right there, these cuties come in a wide range of colours, some of which are rare and unique. We’ll be getting into all of these details. 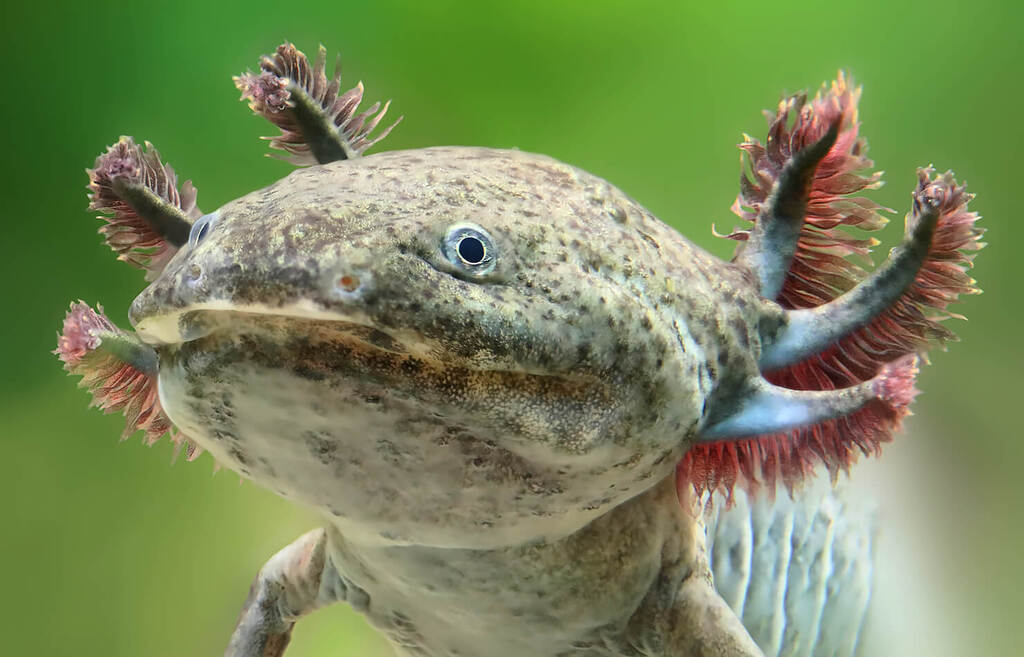 Axolotls have short legs, webbed feet, a long tail, a dorsal fin that runs the entire course of their body, a lower fin that extends from hind legs to tails, and feathery gills. Their feathery gills sprout from their heads like a lion’s mane. Along with their gills, adult Axolotls also have functional lungs and can even breathe through their skin.

Their heads are large and their bodies flat and broad. Their eyes are round and dark with yellow iris.

One of the characteristic features that add to their already abundant cuteness is their upturned mouth. It makes them look like they are constantly smiling at you.

They are mostly greyish brown in the wild with black speckling, but the ones bred as pets can be found in a wide array of colours.

There are numerous types of Axolotls based on morphs and colours and today’s article will cover most of the known varieties and colours of cute Axolotls. All Axolotls colors are unique and have their special look but we’ll also get you familiar with some of the rare Axolotl colors. You can also explore some goat breed here.

You may find various types of Axolotl with a price ranging from 30 to 50$ but the rare Axolotl colors may even cost you as high as 1000$ for one cute Axolotl.

Mystery Behind the Axolotl Colours!

Axolotls exhibit four pigmentation genes that mutate to give them a wide range of colours. Various combinations of these genes lead to the formation of different shades of pigments released from the pigment cells that impart colour to the Axolotl.

So let’s dive in and find out about the types of Axolotls based on their morph:

1. Common Morphs or the Basic Morphs Are as Follows: 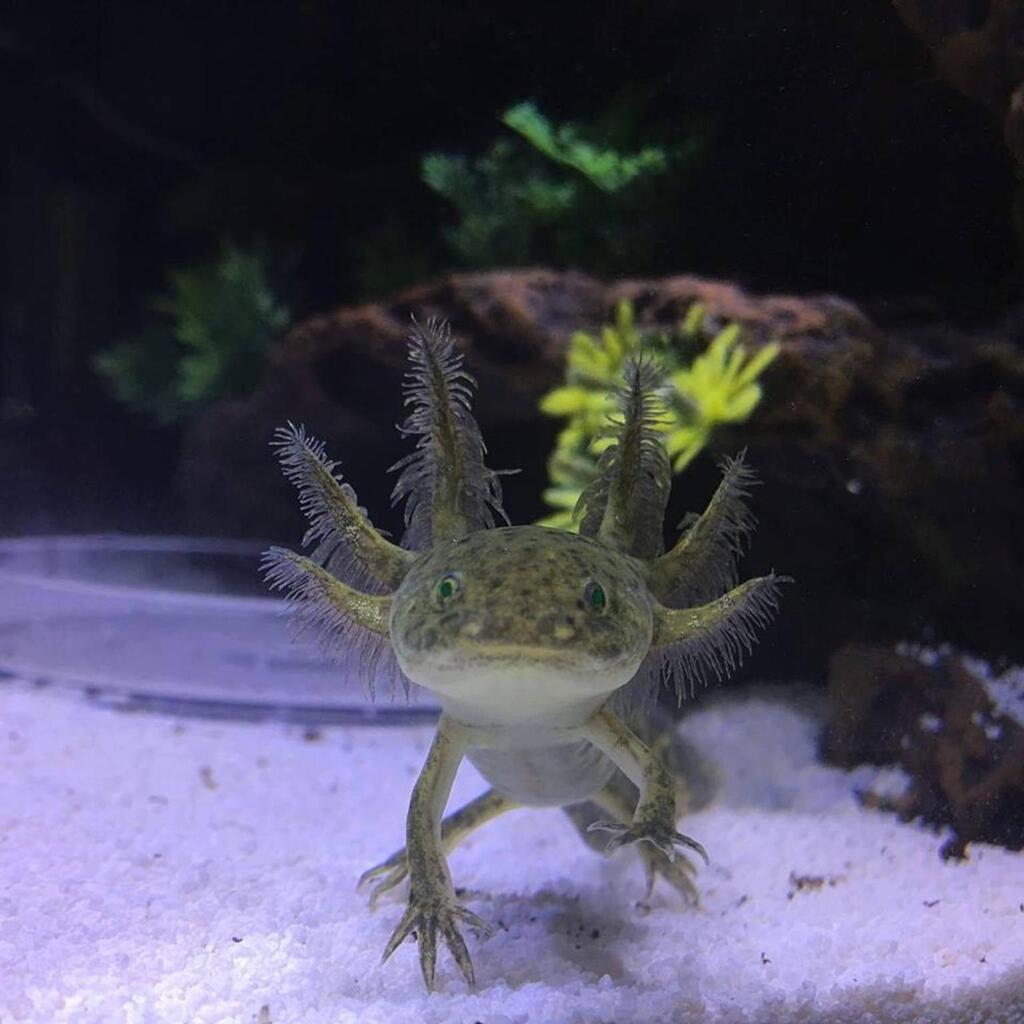 Most commonly found variety which has a dark greyish brown shade with golden specks throughout the body. Their colour helps them camouflage in the wild. 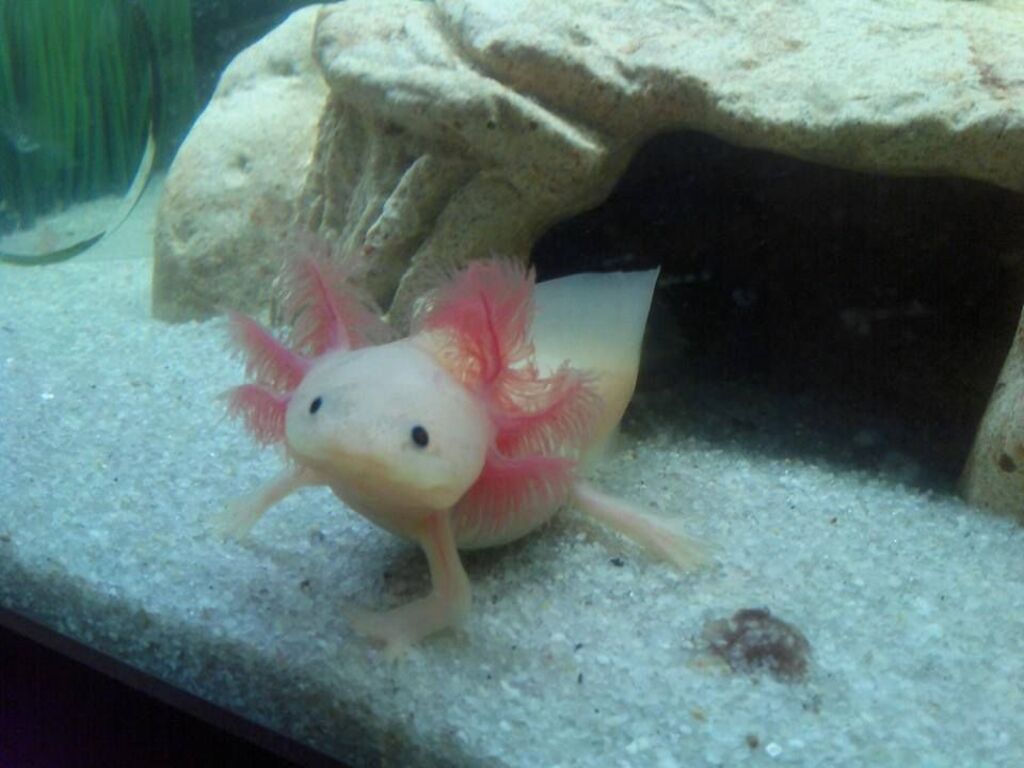 Also known as the pink Axolotl. They show a combination of pink and white wherein, the body is white and the gills are light pink. Unlike the white albino Axolotl, they have a black eye colour. 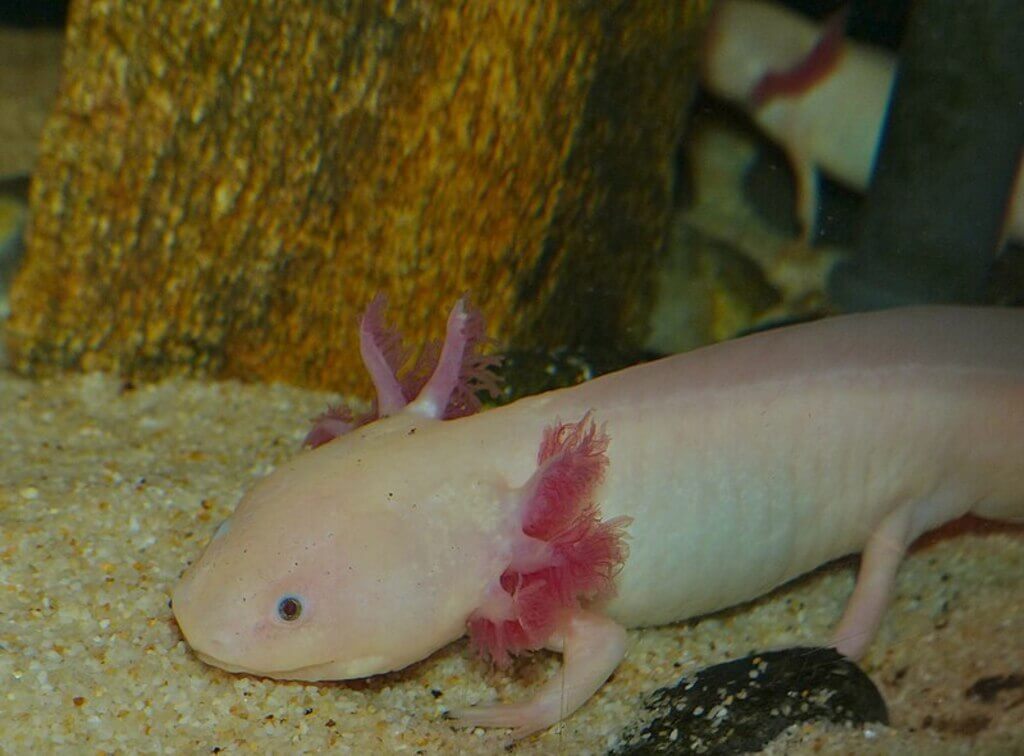 Albino Axolotls look exactly like the leucistic variety. The only difference is the red colour of their eyes. 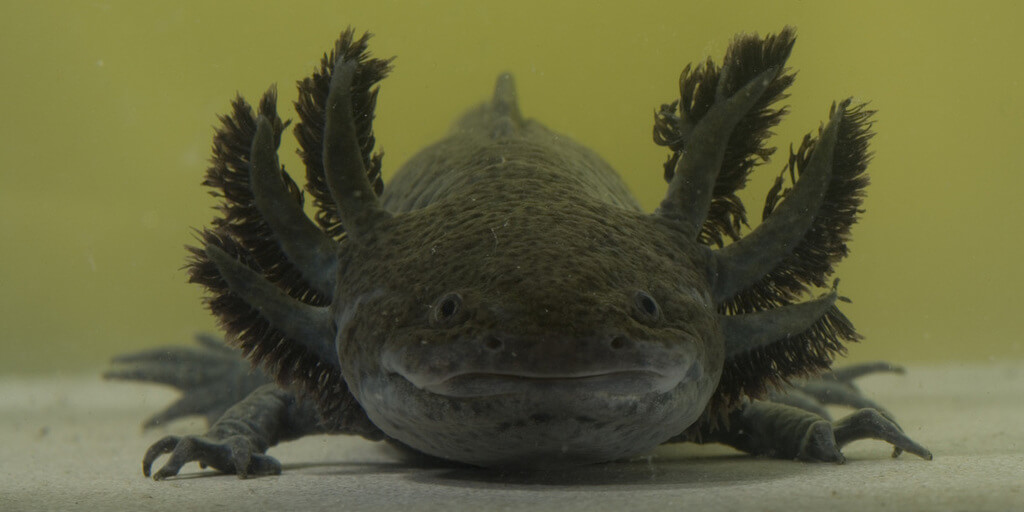 They may range from greyish coloured to pitch black depending on the number of melanophores but they do not have any dots or specks like that exhibited by the wild type. 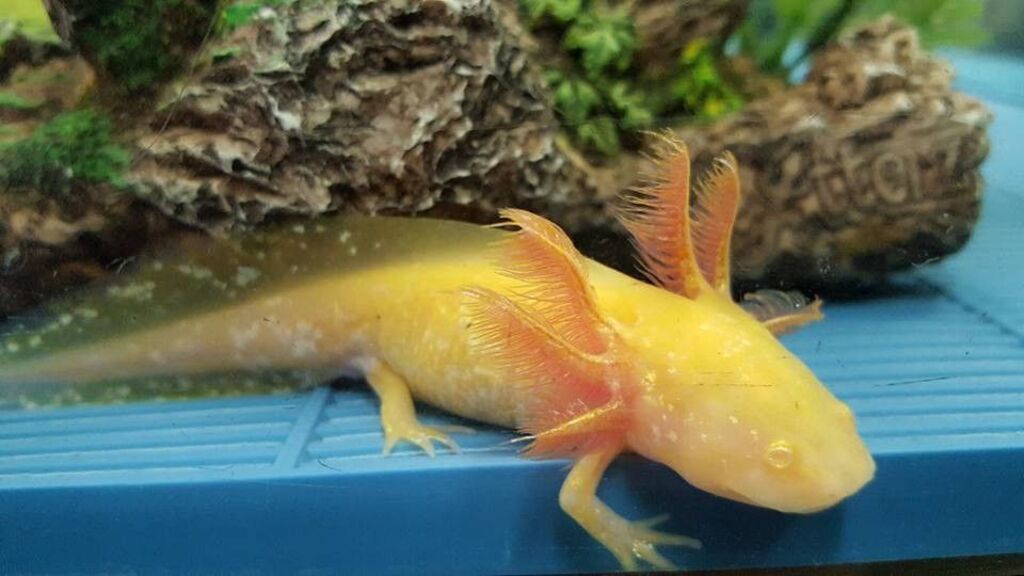 They have a yellowish golden body due to the presence of a high number of iridophores, accompanied by yellowish, pink or red gills. Their eyes may be transparent or red in colour.

2. Special or Uncommon Morphs Are as Follows: 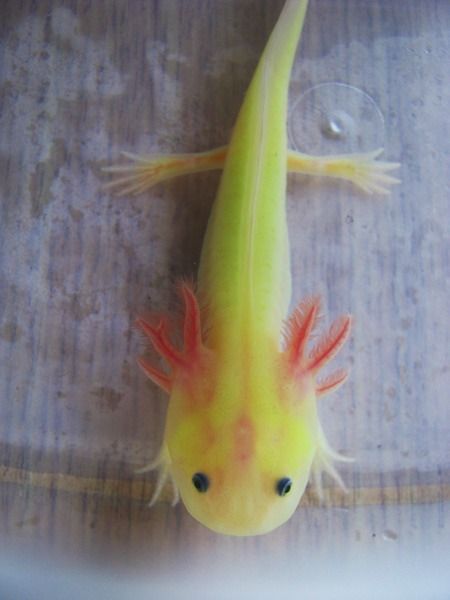 These special cuties are designed by scientists and show unique colouration due to the presence of GFP in their genome. GFP is a special protein known as the Green Fluorescent Protein responsible for the green (glow in dark) Axolotl. GFP can be introduced in any morph to make it glow. 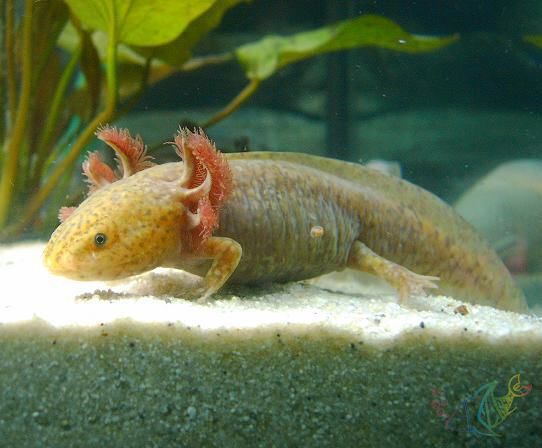 They are a type of Albino Axolotl that instead of turning white or golden become orangish in colour and eventually copper.

3. Rare Axolotl Colors or Morphs Are as Follows: 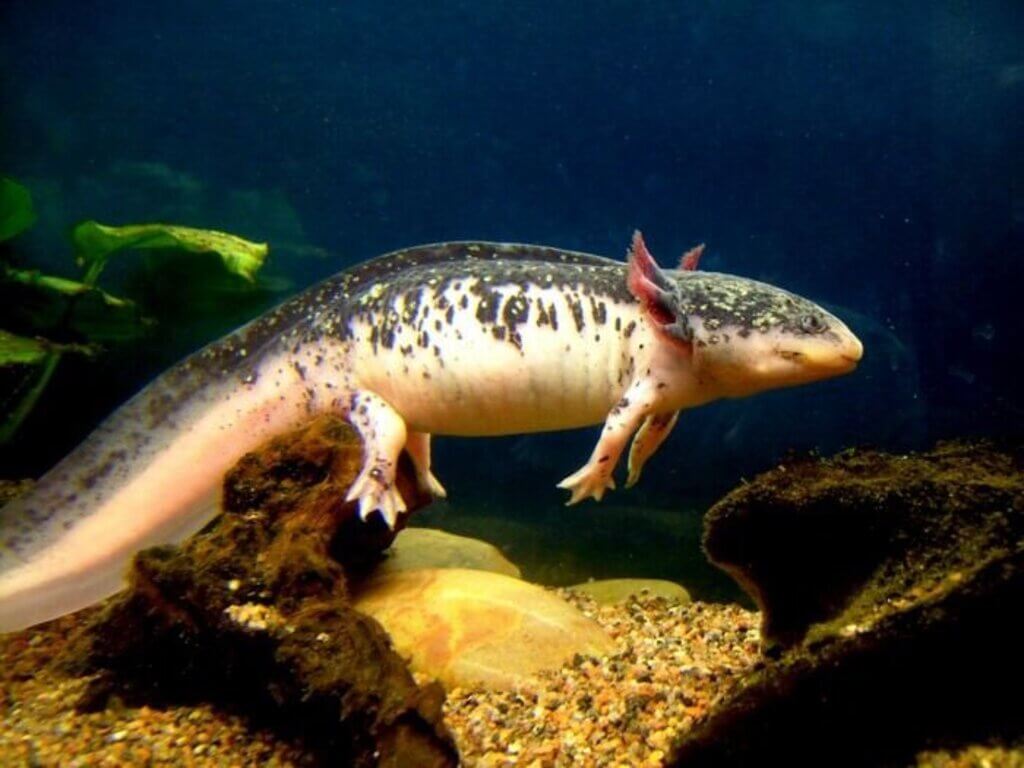 They resemble the leucistic Axolotl but have tiny black specs throughout the body. 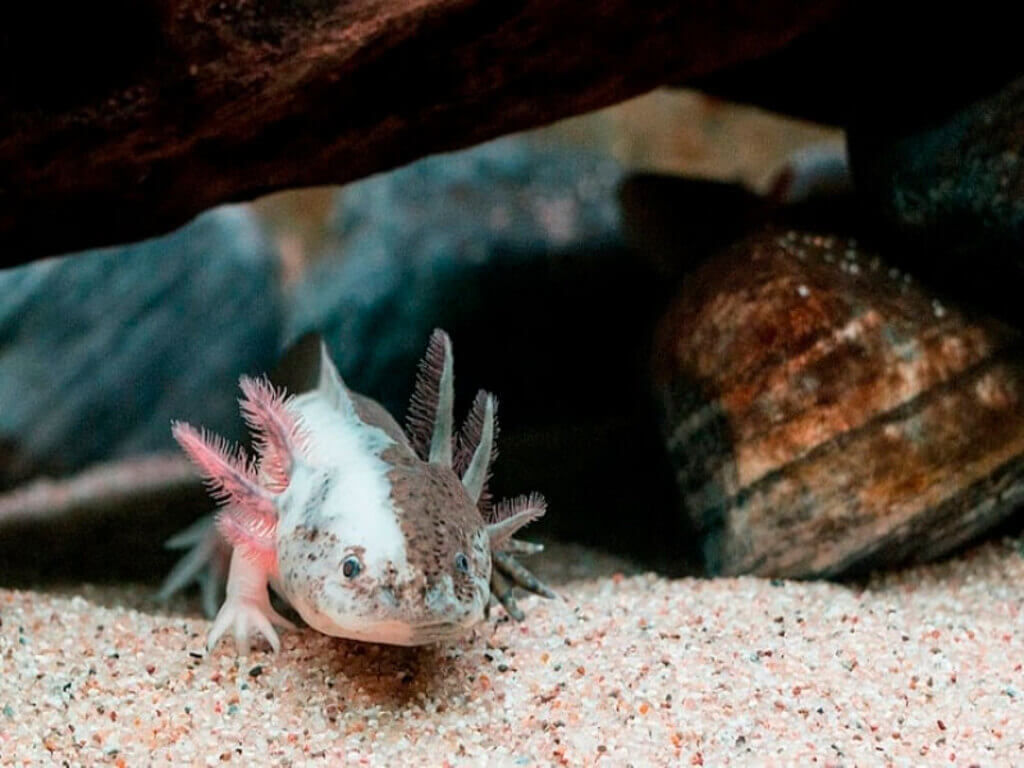 If you are aware of some Greek Mythology, you may know what a Chimaera is. For those who have no clue what it means, let me tell you that a chimaera is a monster from Greek mythology which has a snake for a tail, a lion’s head for a face and a goat’s head coming out of the back of its head. It’s a fusion of three species.

Chimerism in genetics is a phenomenon wherein two or more two genotypes form one cell. Chimeric Axolotl shows two different types in one organism. Imagine having half white and half melanoid Axolotl! Yes, they are very very rare. 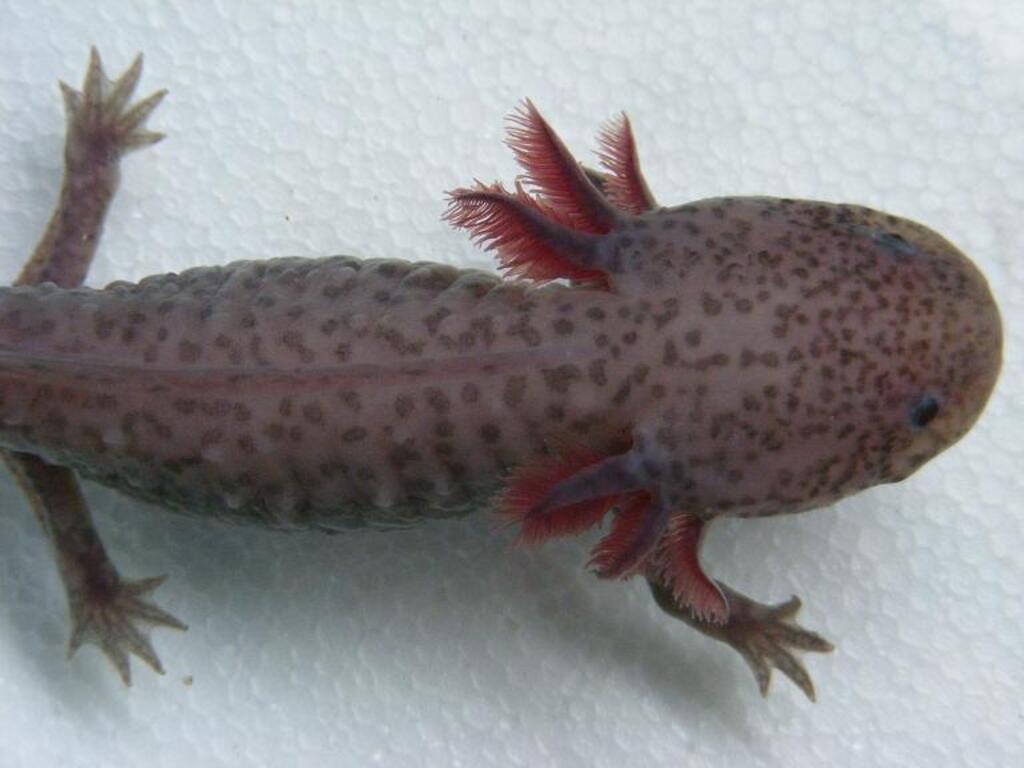 Also known as the Lavender Axolotl due to their slight purple colouration, silver dalmatians are named so due to their striking resemblance to the dalmatian breed of canines. 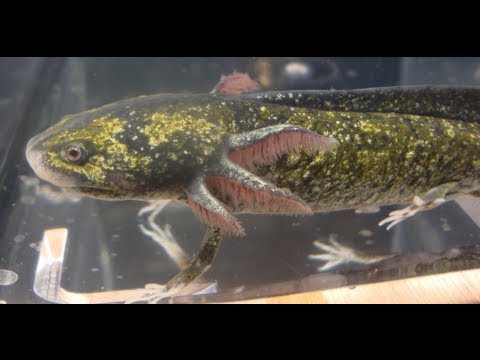 They have greenish specs all over their body over the black base colour. Only one such Axolotl is known until now. YEP, TOO RARE. 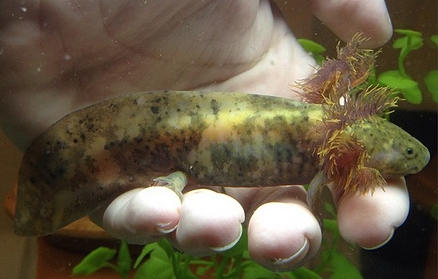 A result of two DNAs fusing to form one, a natural accident in the process of genetics, gives them two colours. These aren’t split in half like the chimaera, they show both colours mixed up throughout their body. 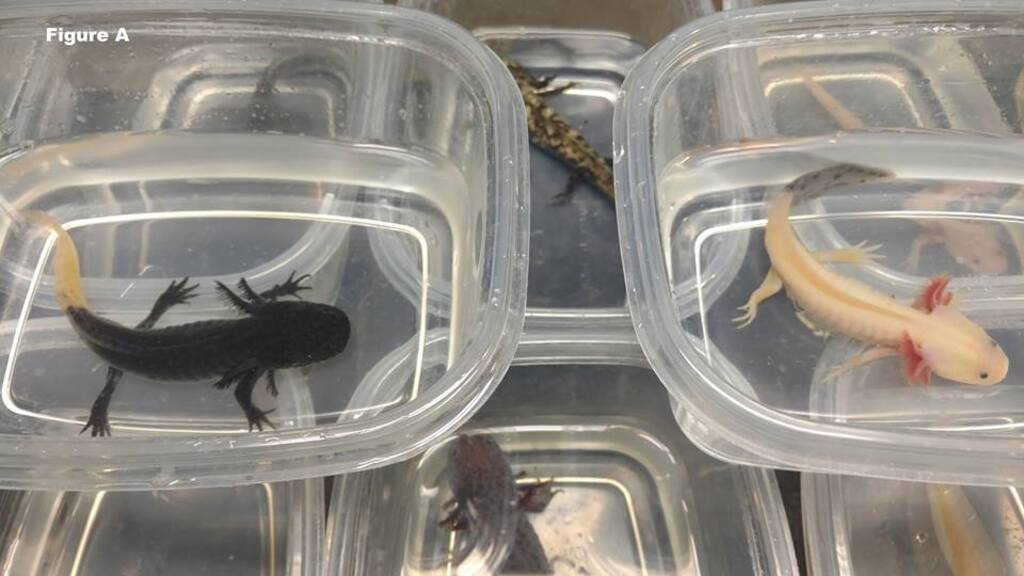 The firefly Axolotls have light bodies with dark tails or vice versa. They were first created using embryonic graphing by Lloyd Strohl.

Their cute smiley mouth is used to vacuum all the food in. They feed on insect eggs, molluscs, crustaceans, small fishes and even on other Axolotls.

Hatchlings that are hungry for their first meal sometimes chomp on their siblings’ limbs, which in their case isn’t much of a concern because of their amazing regeneration powers. 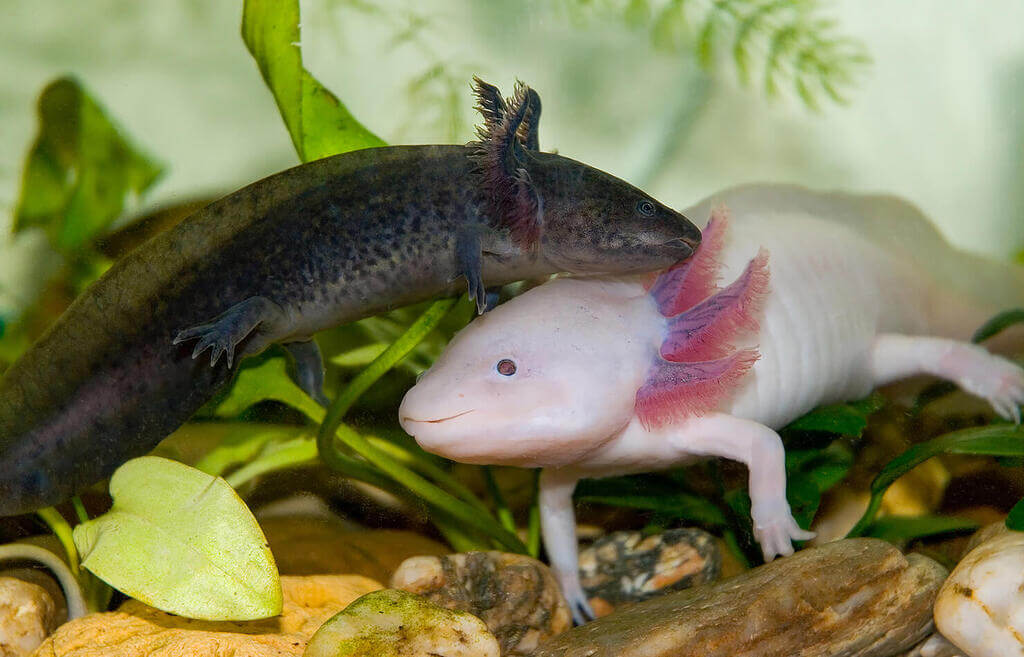 A single Axolotl needs a 40-gallon tank. They enjoy spending the majority of their time at the bottom of the tank. Make sure you add non-chlorinated water to their tank as chlorine is very harmful to your cute Axolotl.

They are poikilothermic organisms and hence, lower temperatures do not suit them. The temperature of their tank water must be maintained at 16 to 18 degrees celsius to ensure good metabolism, sufficient food intake and stress-free life for your Axolotl.

An increase or decrease in temperature compared to the normal range will cause stress to the animal as the rate of metabolism is quickly affected by it. More than a day’s exposure to a high or low temperature may lead to the disease or death of your Axolotl.

You can feed your pet Axolotls salmon pellets, frozen or live earthworms, waxworms and bloodworms. They can also eat small fish but make sure they are free of parasites.

Substrates added to their tank must be such that they shouldn’t lead to obstruction, choking or impaction by getting swallowed while they are consuming food. You can use fine sand. You can add aquatic plants to their tanks and other decorations that are larger than the size of their head and do not carry the risk of impaction.

Axolotls make unique exotic pets and are fun to have as they are very playful and friendly.

They are one of the most unique amphibians in the world that are now critically endangered in the wild but there are many captive-bred varieties and morphs of Axolotls available for commercial purposes as well as for scientific research on regeneration.