Different Types of Ferrets and Their Coat Patterns

Ferret is a common name of Mustela Putorius Furo and they belong to the weasel family. They are used as domestic pets for over 2,000 years but are a lot of work. Different species of ferrets have different colors of fur like brown, white, black, or even mixed and they weigh around 1.5–4 pounds. Continue reading to know about types of ferrets.

They only have a lifespan of 7-10 years and have an average length of 51 cm out of which 13 cm is their tail. You can easily differentiate between male and female ferrets as males are larger than females.

Ferrets can easily hybridize with polecats as they are closely related. Polecat-ferret hybrids damage the local fauna therefore some places have strict rules against keeping ferrets especially in New Zealand. 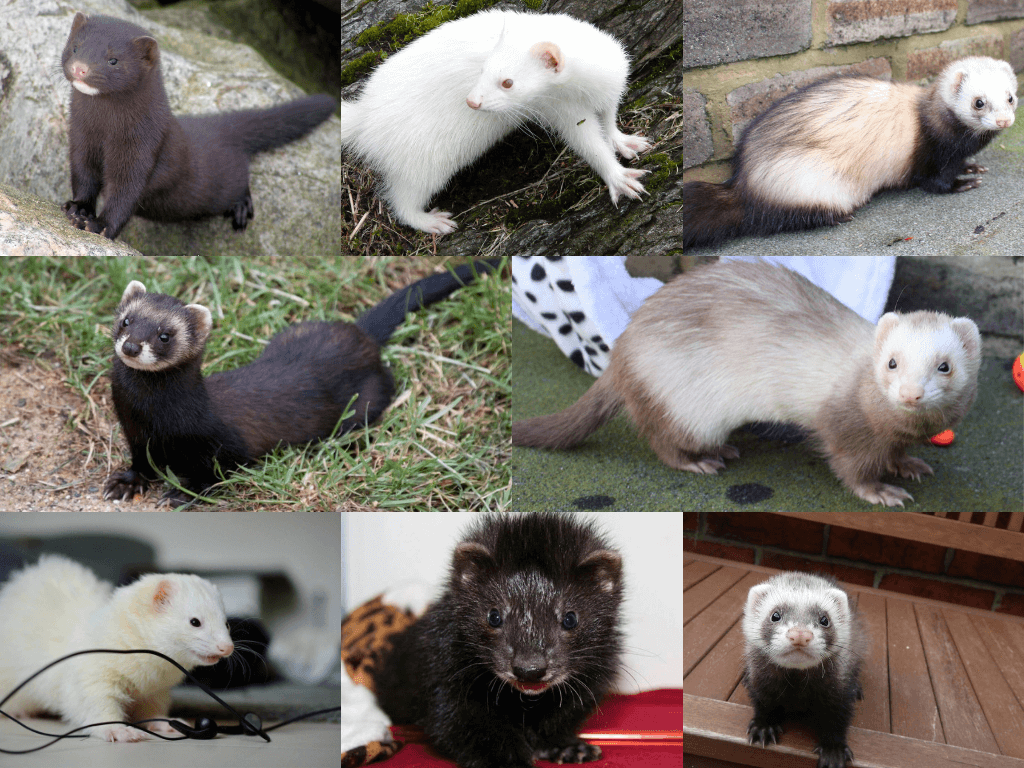 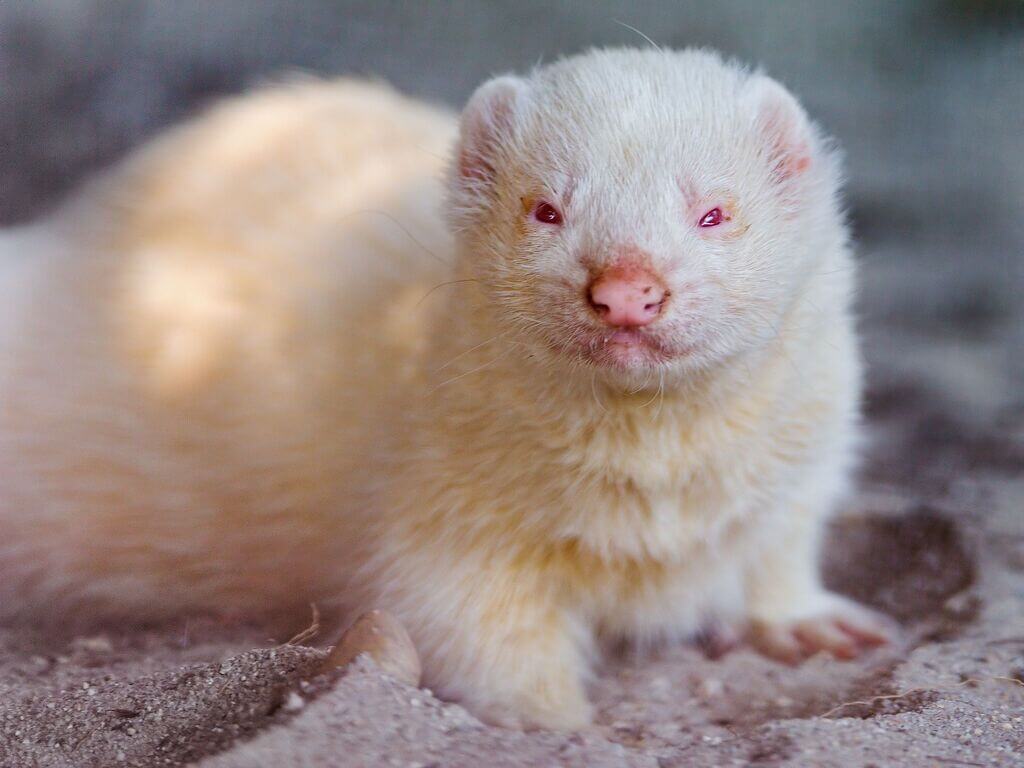 Albino ferrets are the lightest out of all types of ferrets and have such beautiful characteristics; eyes vary from pink to red with a pink nose and a neat white coat without any other colors. Their coat is so white that you easily can find them even in the dark but some Albino ferrets have yellow fur due to the oil present in the skin.

They are most active and energetic in the mornings but in the afternoon they will get lethargic and will sleep like they are lifeless. To keep them fluffy and soft you have to bathe them at least once a month. You can also keep them as a therapy pet for an elder. The only problem with this type of ferret is that they have hearing problems. 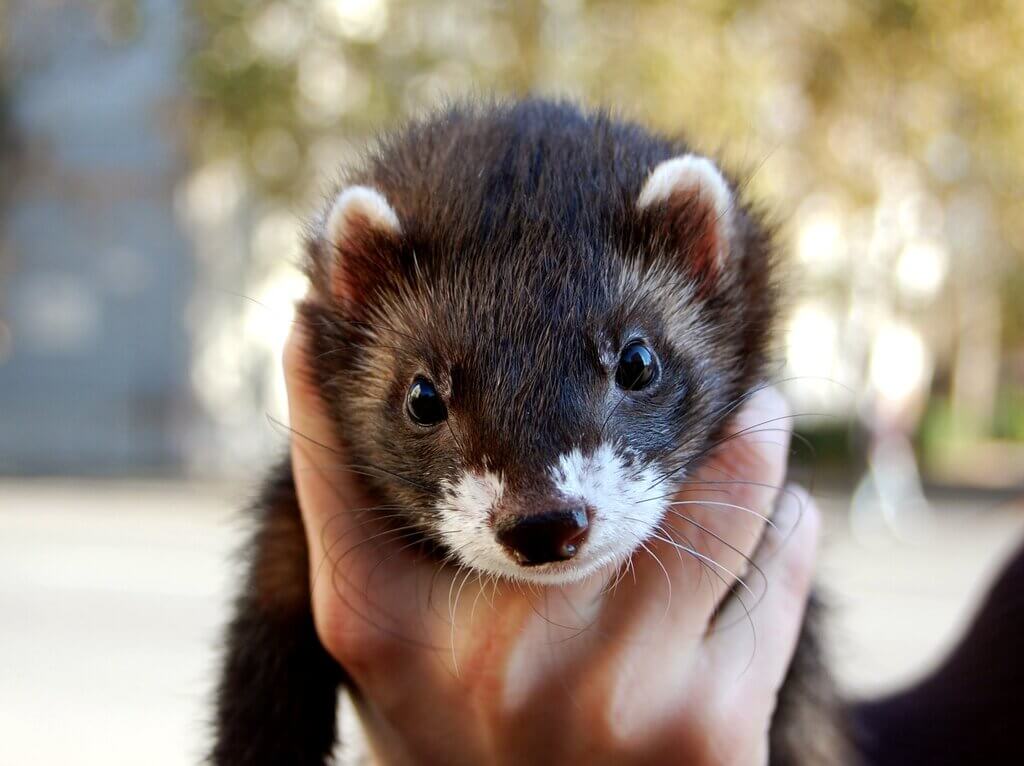 Black Sable Ferrets is a top choice if you are looking for a ferret pet. As the name suggests these ferrets are the darkest but adorable types of ferrets.

Their body has no color other than black; even the guard hair, small eyes, and nose are also blackish-brown in color. There are hood-like marks from their head to the nose and they have a creamy or white undercoat. 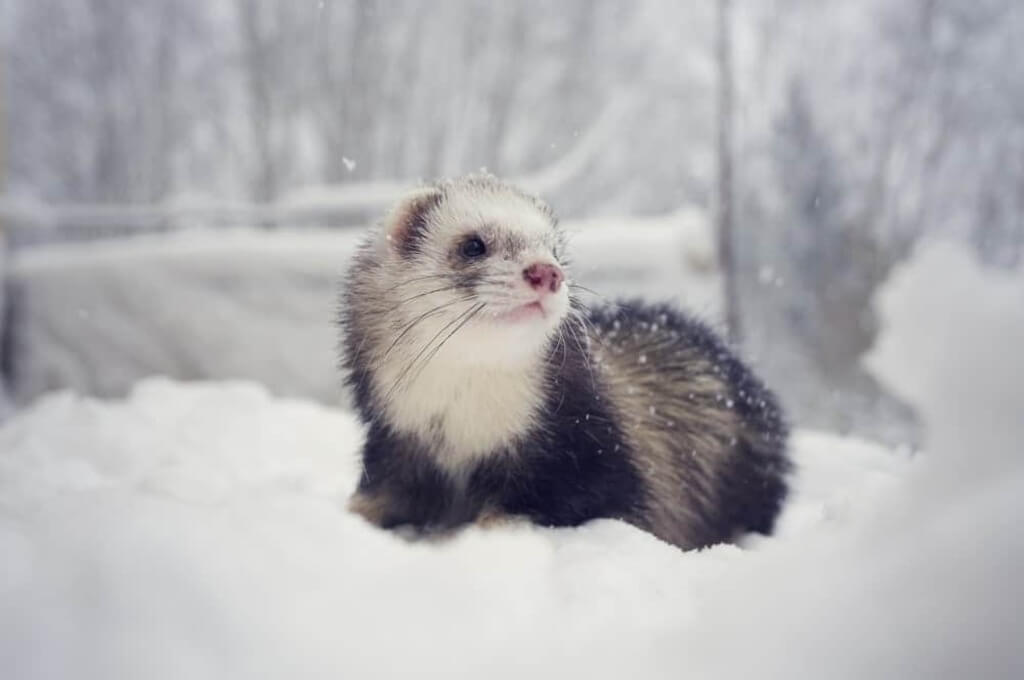 Black Sable Mitt is just like the Black Sable Ferrets but the key difference between them is that they have little white colors on their body. Four feet; from toes to the two-thirds of the leg, the guard hair, and the bib all are white. But their nose and eyes are still black. 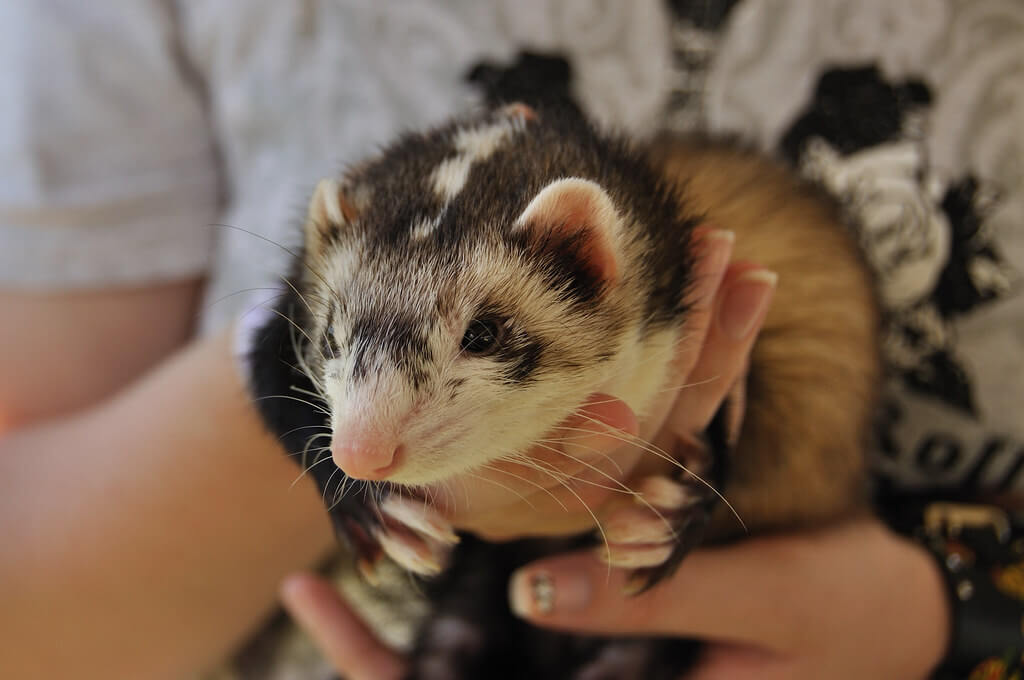 They have a white stripe that starts from the small area between their eyes and ends at the back of their necks passing through their heads. Like many species of ferrets, they also have white feet and a white bib. 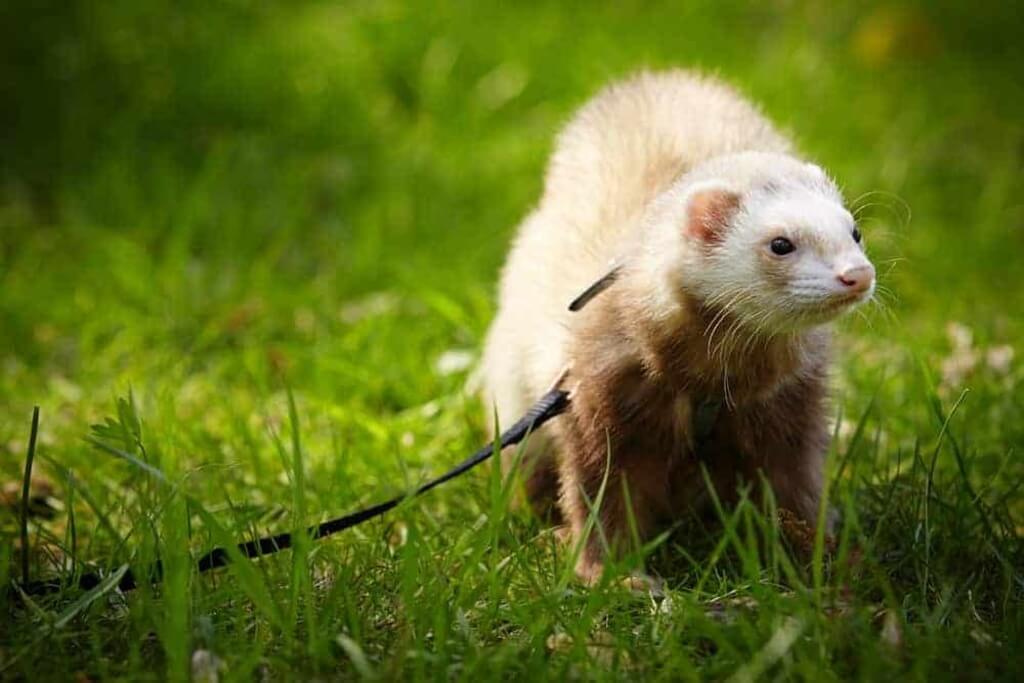 Champagne Ferrets also known as sandy ferrets are extraordinary as they possess the milk-chocolate brown guard hair. You may also find a Champagne Ferret that may have a slightly golden hue to their underbelly but most of them have a white undercoat. Also, their eye color varies from pink, pinkish brown, or beige and their nose may be pink or beige having a light brown pattern. 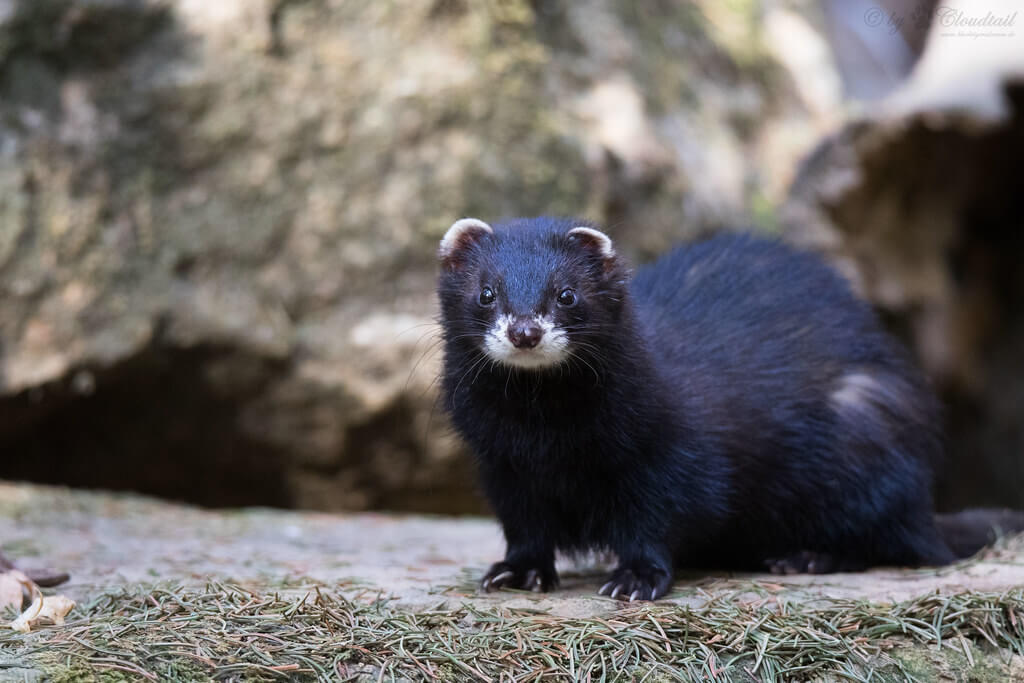 Chocolate ferrets have the same color as that of the sable ferrets but their tails, legs, and banded masks vary from dark brown to red. Although it appears that they have small red-colored eyes, most of them have black eyes. Their nose has a T- outline and the color of the undercoat of the breed varies from wheat color to creamy one. The animal has hair all over the body including the head and neck. 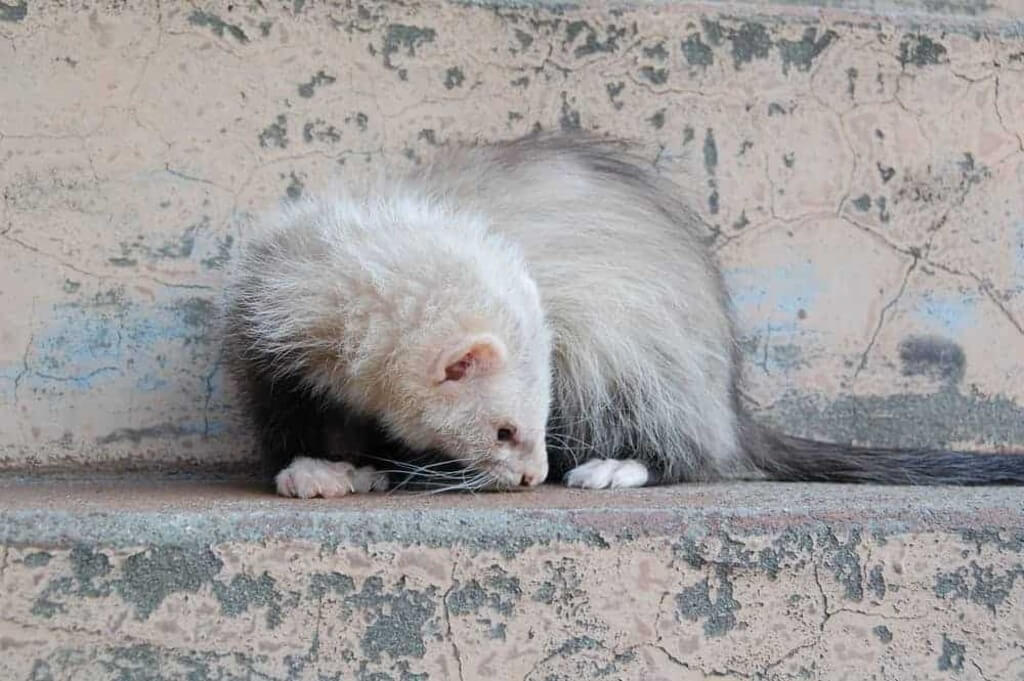 Identical to chocolate ferrets, this is one of the species of ferrets that have small brown guard hair, reddish-brown masks, tails, and legs. The only difference that makes them unique is that they have four mitts that go well with their coat’s light color. 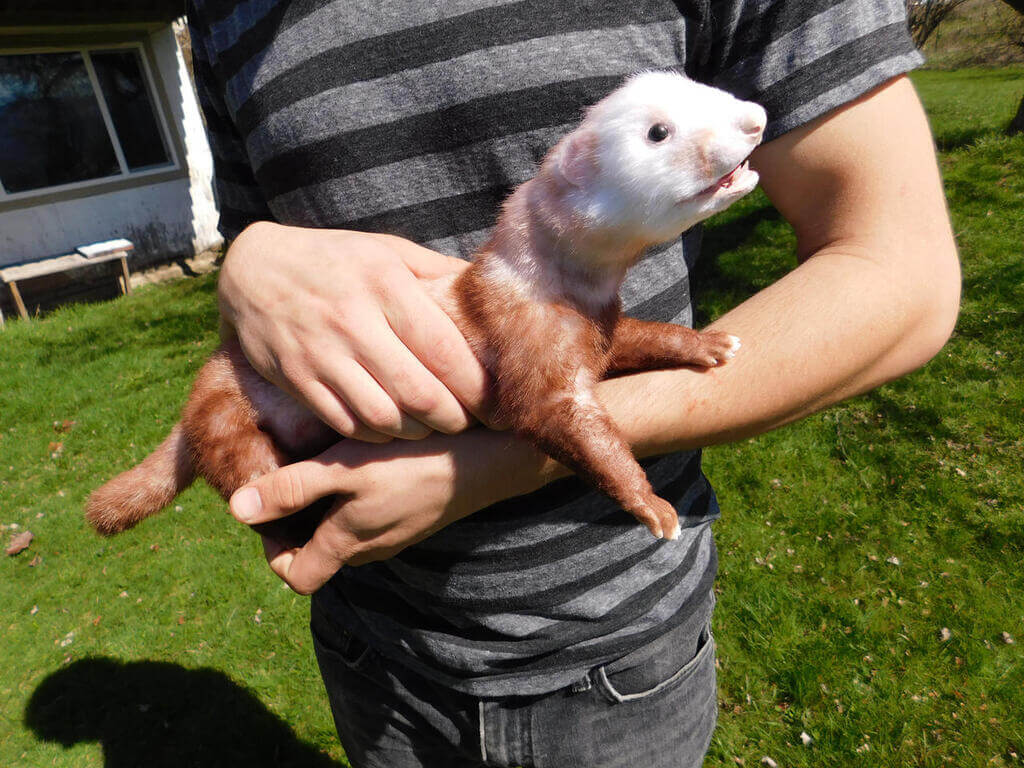 If you are looking for someone cute among different species of ferrets, Cinnamon Ferret seems a perfect pick. It has cute reddish-brown guard hair and tails. The color of the ferrets may vary from dark to light burgundy. However, some of them may also have black eye color. 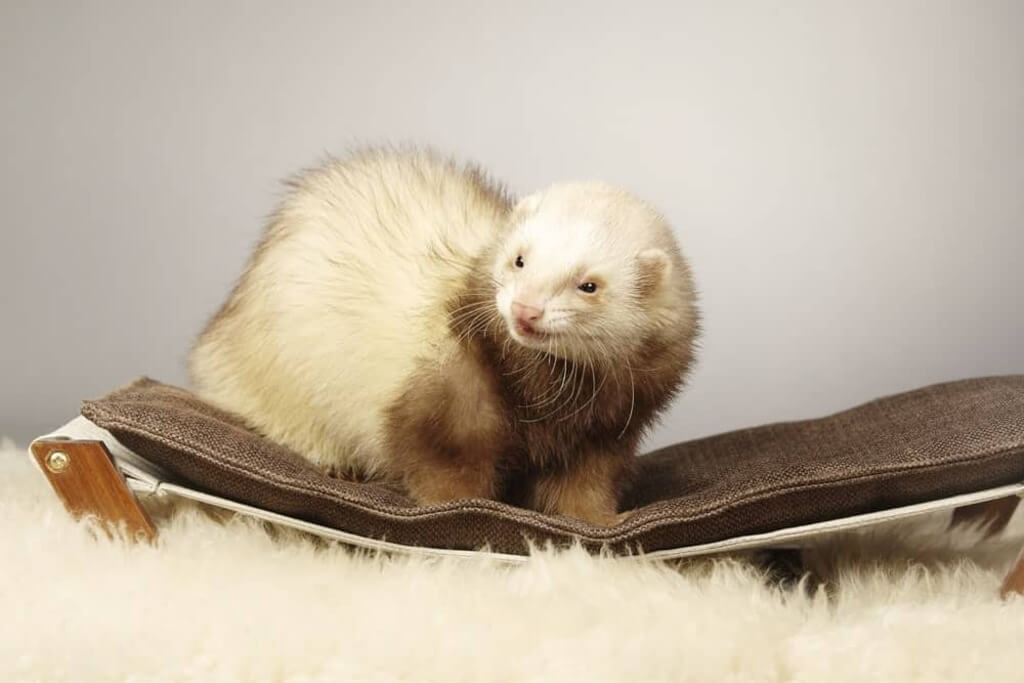 They look similar to their cinnamon counterparts and have cinnamon-shaded masks and red-brown fur all across their body. The major difference that makes it one of the unique species of ferrets is that they have four mitts. 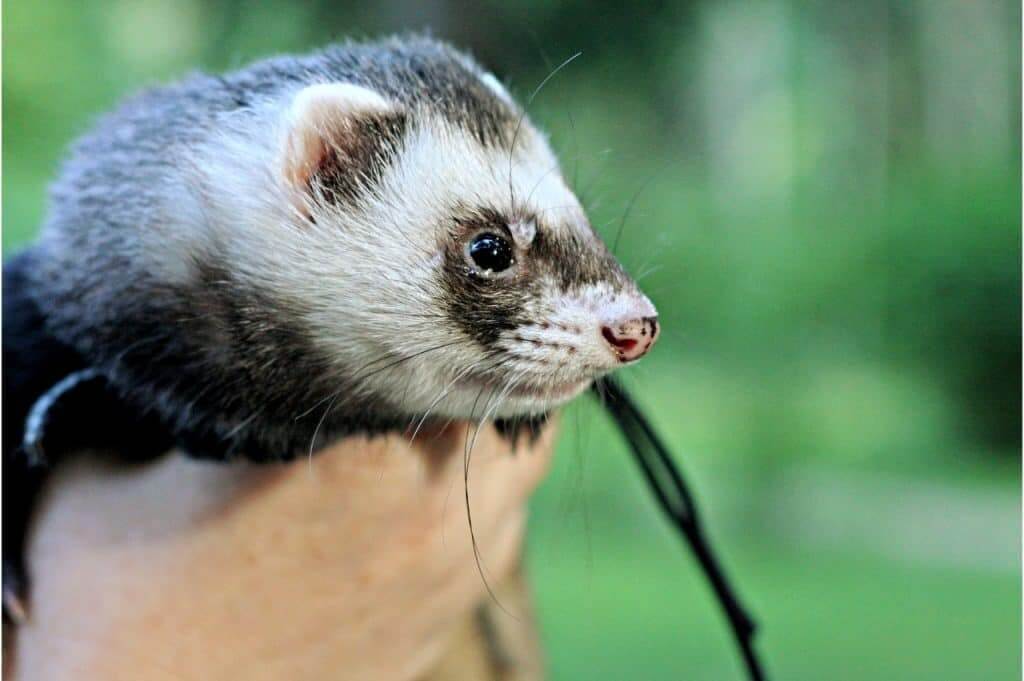 One of the different types of ferrets is the Dalmatian Ferrets. The entire body of the species has white fur with black spots or blotches across its back. Although they don’t have the spots on any other part of the body other than at the back yet this feature makes them a little bit similar in looks to small Dalmatian puppies. Dalmatian Ferrets have pink noses and their eye color is either has dark black or ruby eyes. 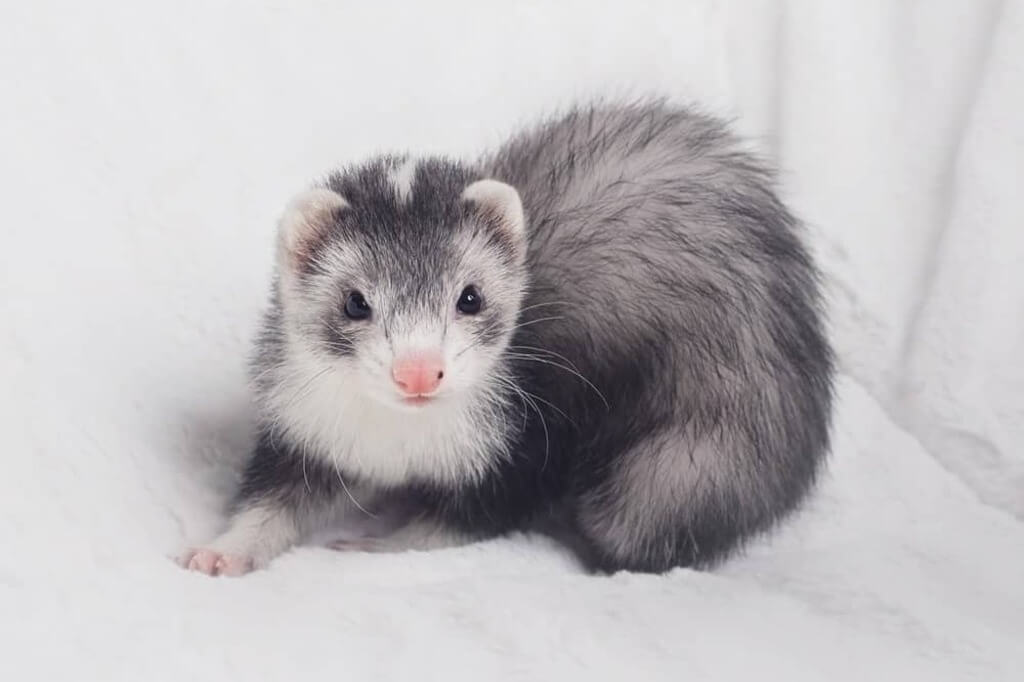 Looking for something cute, here is your pick. Silver Ferrets have an amazing coat of deep, gunmetal grey and black hair. Their mitts are perfect and have a white color. While their eyes seem like a small botch, the color of the nose for this kind of species may vary from pink, mottled, or black. 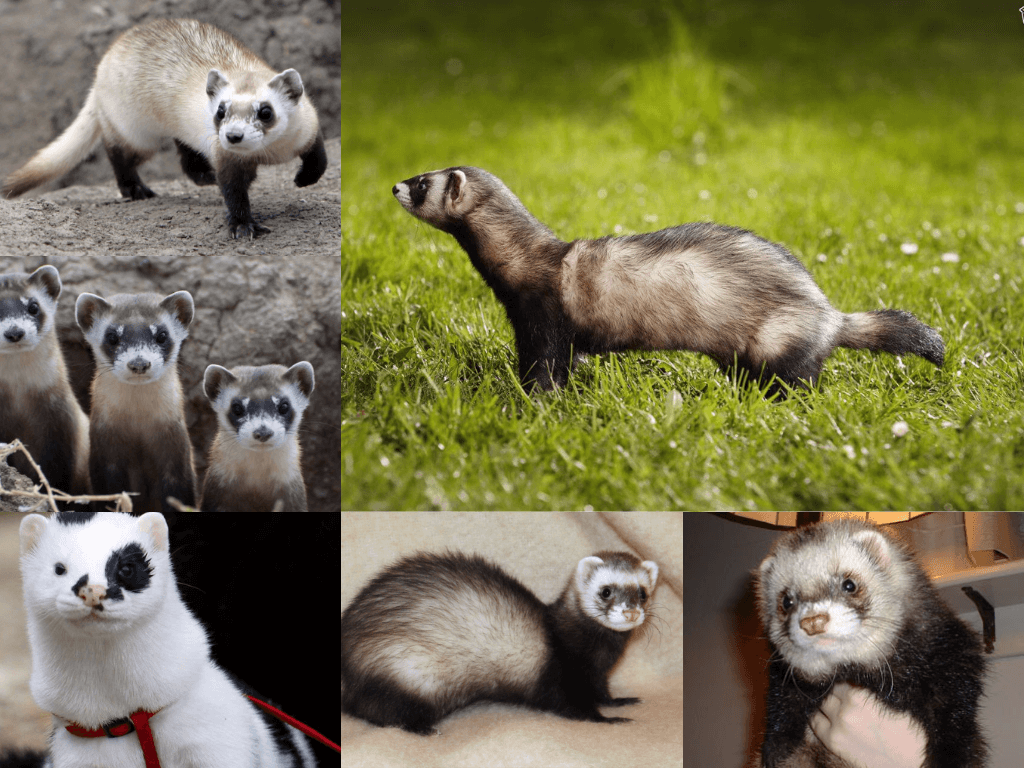 Considering to pet one of the different species of the ferrets. Here is a brief about the species that you must be well- aware of right before one in your home.

Know What They Eat:

The species of ferrets are that of the carnivore family and need meat in their diet. They can thrive well on quality kitten food but you need to ensure the constant supply of the food. They are high metabolism animals and need a regular supply of food.

Moreover, you can also feed them small human-grade meat pieces. They also like to chew small objects so you better get them some toys from the market.

Ferrets choose to be social animals and hence you must get two of them rather than one. Mostly active during dusk and dawn, they will dance when they are happy. You should make sure that they are kept away from guinea pigs, small kittens, and rabbits as they are born skilled to prey on small animals.

Ferrets are curious animals and may roam all around the home. Hence, it is necessary to keep them safe as they can chew any small object that can harm them. You also need to train them well to use the litter tray as cats do. You can put litter in the small box in the corner of the corridor but make sure you clean it daily.

If you are thinking of petting a ferret, make sure you maintain regular health checkups. You also need to have certain vaccines done to protect worms and fleas. Find a local vet to look over the animal for you.

Different types of ferrets are adorable and eye-catching. As ferrets are social animals, therefore, if you want to pet a ferret then you should pet two ferrets at a time. Different species of ferrets have different personalities and colors by which they can be identified but they share the same habits, playfulness, high energy level which makes them one breed. Also, they are likely to be deaf and blind.