178 views
Table Of Contents hide
1 History of the Caucasian Shepherd
2 Characteristics
3 Size
4 Personality
5 Health
6 Care
7 Feeding
8 Coat Color
9 Grooming
10 Training
11 Exercise
12 Nutrition
13 Frequently Asked Questions
13.1 What Are Other Names for the Caucasian Shepherd Dog?
13.2 Is a Caucasian Shepherd a Good Family Dog?
13.3 Are Caucasian Shepherds Good Working Dogs?
13.4 How Much Do Caucasian Sheepdog Puppies Cost?
13.5 How Many Puppies in a Caucasian Dog Litter?
14 Conclusion
There are many different kinds of working dogs, from guard dogs or shepherds to search and rescue dogs—but the Caucasian shepherd isn’t often at the forefront of most dog owner’s minds when it comes time to adopt. While this brave, fiercely loyal, and protective breed can make for a steadfast companion, guardian, or even service animal, their intelligent, independent nature makes them a better fit for more experienced dog owners, as they can be strong-willed and intense.
These rugged canines have been known to stand down wolves, bears, and other predators and have a history of protecting their family and their family’s herd.

If you think you’ve got what it takes to add this kind of loyal guardian and companion to your “pack,” then this is the article for you! We will break down everything you need to know about caring for your Caucasian shepherd and answer some Frequently Asked Questions as well—including where to find a Caucasian shepherd dog for sale!

History of the Caucasian Shepherd 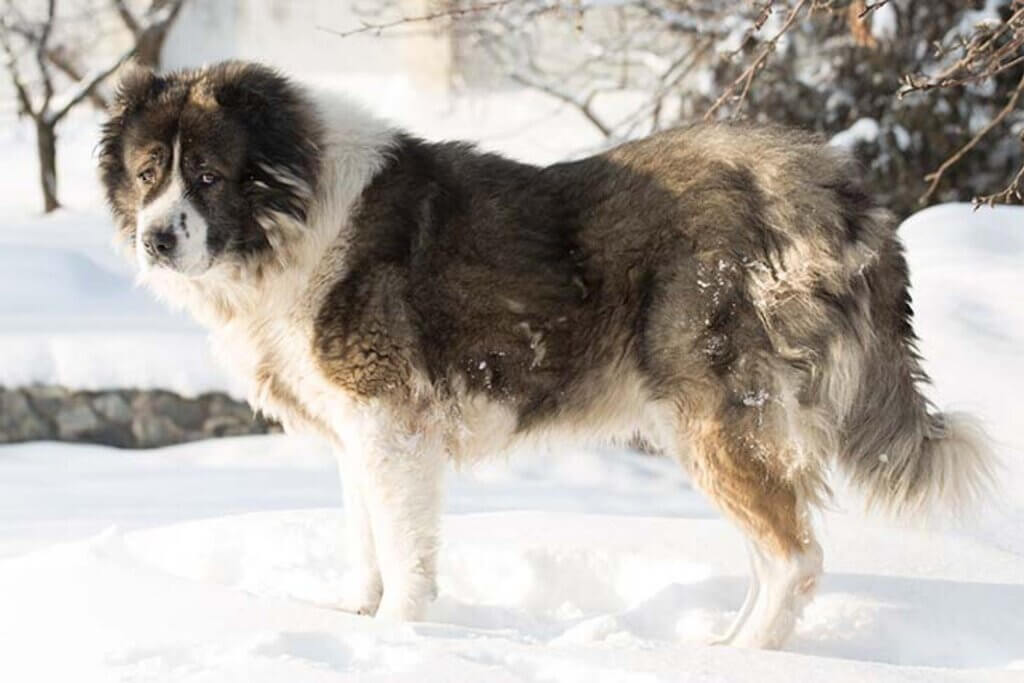 Originally hailing from the Caucasus mountain region in eastern Europe and Asia, Caucasian shepherds have been used throughout time as one of the most ancient breeds farmers and livestock keepers kept to guard herds from predators and trespassers.

While some believe that the true origins of the Caucasian shepherd hail from Tibet, there is yet evidence that they may in fact have originated in an earlier form in Mesopotamia.

There is much diversity in terms of the appearance of these dogs due to regional breeding practices; for example, those with a shorter coat and a more slender frame were generally Steppe-bred, whereas the stockier, longer-coated version was bred as a Mountain type.

The vastness of the Caucasus mountain territory also allowed for more diversity of appearance, as dogs of a certain phenotype mated with others.

At the beginning of the 1900s, the Soviets began selecting desirable traits within these dogs and breeding them accordingly. Primarily, they sought to distill the inherent confidence, strength, courage, weather-proof double coat, and the relatively good health and intelligent awareness of this particular breed.

While they were used in the USSR as guard dogs in their prison system, it wasn’t long before Germany began to see merit in the breed, bringing it into their working class to patrol the border enforced by the Berlin Wall.

As the story goes, when the Berlin wall came down in 1989, the roughly 7,000 Caucasian shepherd patrol dogs were released to “retire” with willing German families who were fortunate enough to find themselves with a loyal and brave companions. 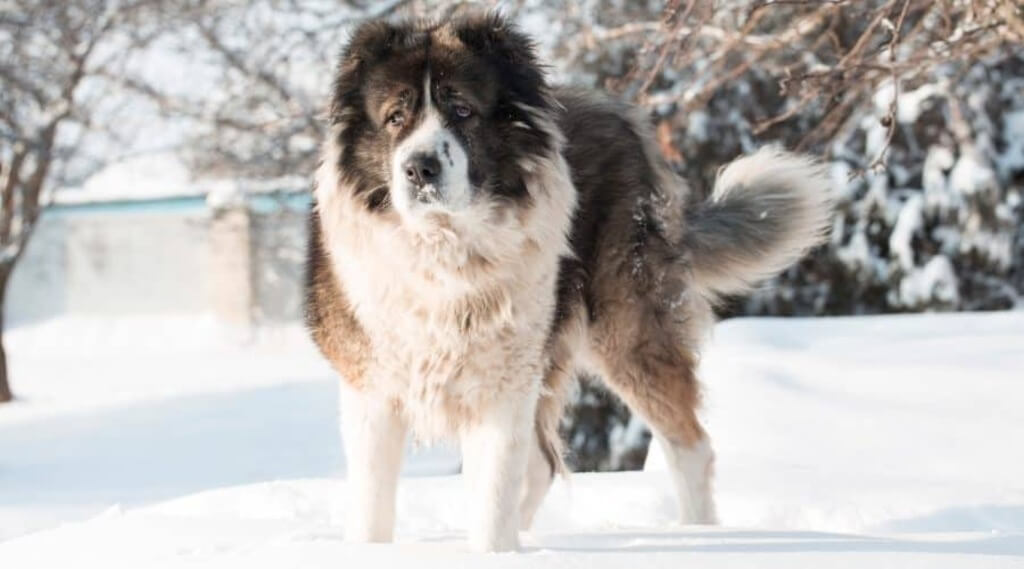 While everyone loves the happy-go-lucky nature of the fluffy and adorable Goldendoodle, there is something to be said for these ancient breeds. Known for their grit, confidence, intelligence, and courage, inviting this special animal into your home is not something that should be looked upon lightly.

Caucasian dogs require firm boundaries in training, constant reinforcement, and early socialization to be at their best—and they are not necessarily as eager to please as the average Labrador Retriever, for example. As such, folks looking to adopt a Caucasian shepherd puppy likely have a few questions about best practices for cohabitating with this impressive animal. 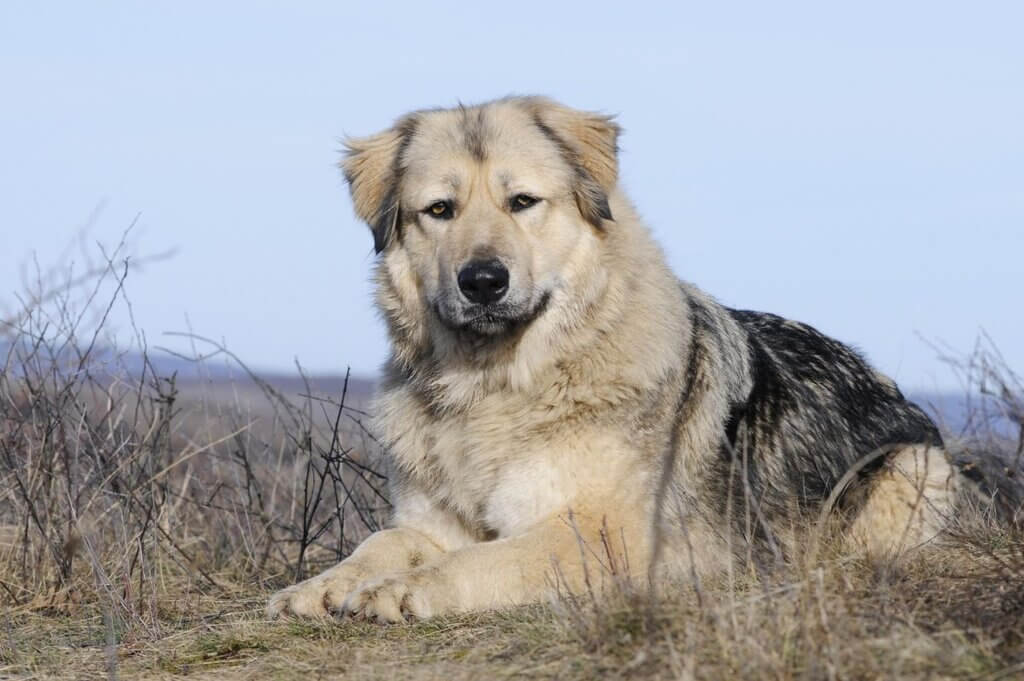 Caucasian Ovcharkas are known to be brave, loyal, intelligent, and independent—and won’t back down from a fight, whether they’re squaring off with a jackal or a bear! They can make good family dogs though this depends largely on their early development socialization.

If you’re adding a Caucasian dog to a “pack” with other dogs in the mix, make sure to slowly introduce them in a controlled setting, as sometimes Caucasian sheepdogs can be wary of strangers and other dogs.

If properly cared for, this breed can live as long as 12 years. Generally considered a healthy breed, it can be prone to cataracts or hip dysplasia if purchased from a negligent breeder. 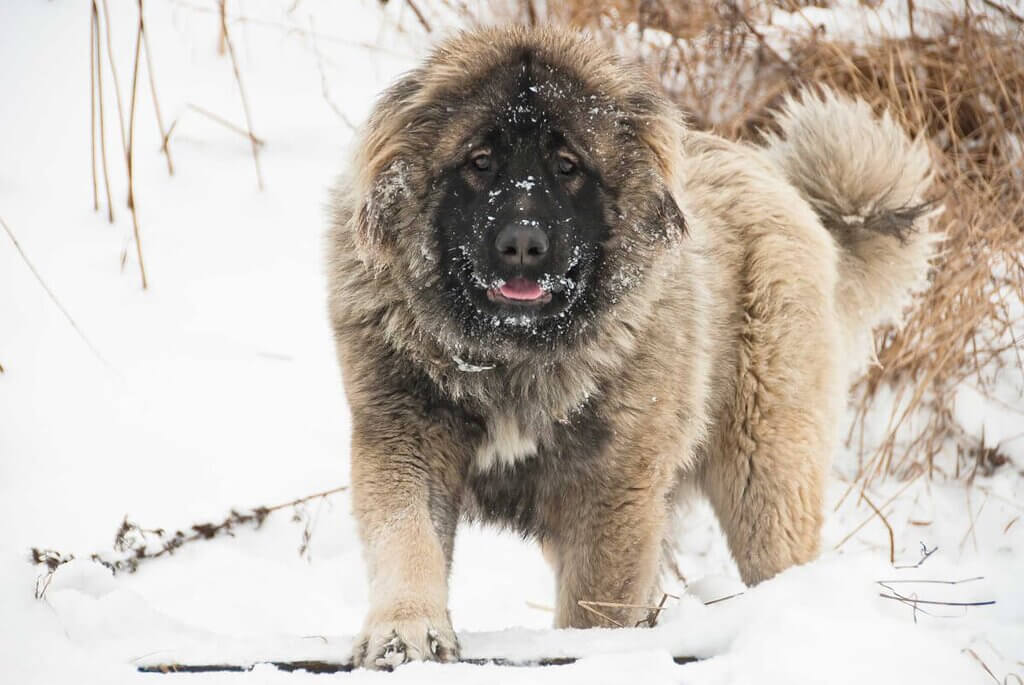 Caucasian sheepdogs require regular grooming to maintain their double coat and prevent matting, along with regular nail trims and teeth brushing. It should be noted that this dog is prone to weight gain, so be sure to feed them a restricted amount of food and provide plenty of exercises.

Caucasian dogs do best when kept to a regular feeding routine, such as first thing in the morning and/or in the evening before bed. Talk with your vet about the right diet for your Caucasian sheepdog, as unwanted weight gain can lead to health issues and other complications.

There are many phenotypes for this breed that are accepted by the American Kennel Club as suitable. Caucasian dogs can come in an array of colors, including:

What’s more, they may have several different variations in terms of markings, including patterns like brindle, piebald, and white markings. 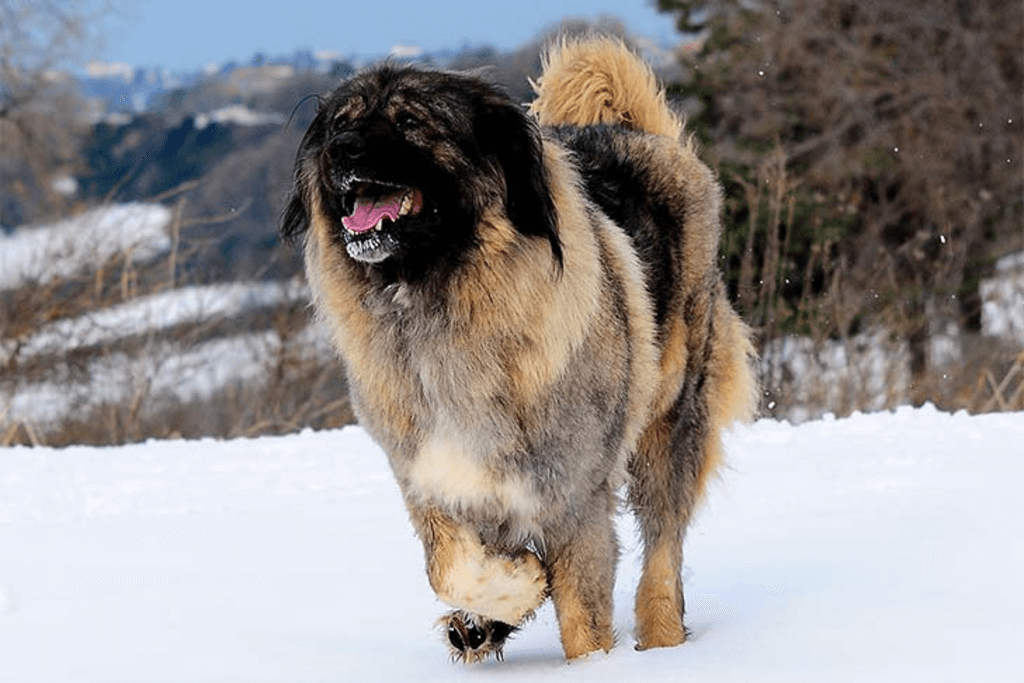 As previously mentioned, part of what made this hearty breed thrive in the mountains between eastern Europe and Asia was its double coat, which came in a variety of different lengths. Whether you end up with a short, medium, or long-haired Caucasian dog, they need to be brushed regularly—and the longer the hair, the shorter they should go in between brushings.

Ideally, for example, a long-haired Caucasian Sheepdog would be brushed every day to prevent matting and remove excess, dead hair. Those with shorter coats can sometimes get away with less frequent brushings—though at the very least, tending to the longer hair around their hind legs or “feathers,” tails, and neck should get a gentle but thorough once-over whenever possible.

It is no secret that when you adopt a Caucasian shepherd, you are inviting a large—sometimes even considered extra large—canine companion into your life. This can make bathing, drying, brushing, and grooming a chore—so be sure to partner up with a reputable groomer that understands how to care for your pup’s unique double coat.

This breed is quite smart—but stubborn and independent, and their loyalty must be earned. The best efforts send consistent messages through positive reinforcement and boundary setting, with plenty of time for play in between. This dog also is at its best when it understands its role within the “pack.” 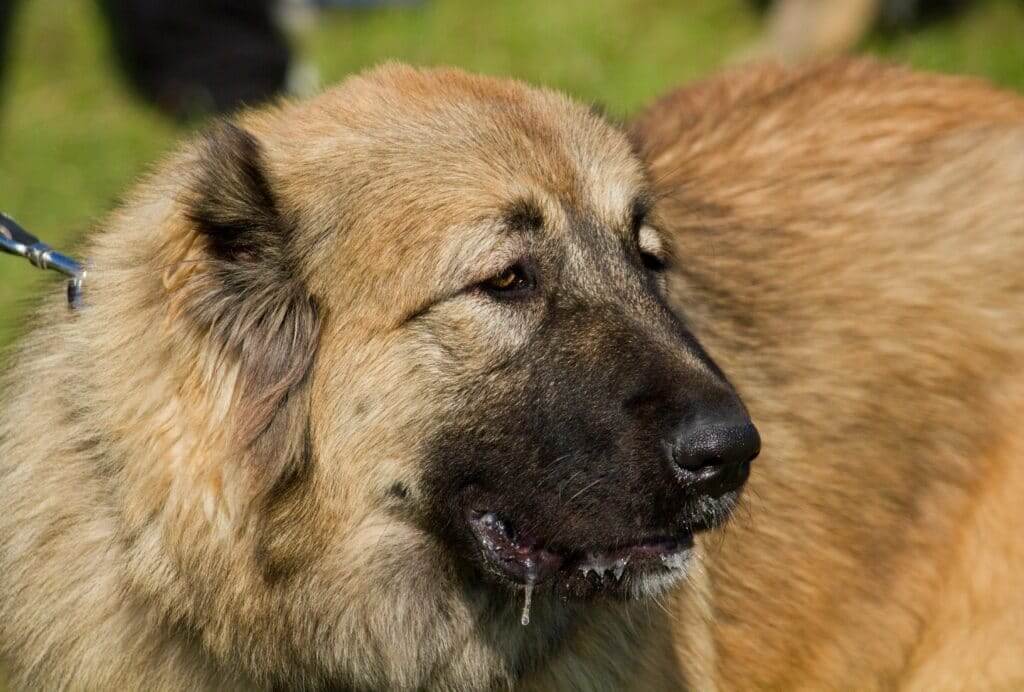 This breed needs at least an hour of exercise a day, and does best with large, fenced yards or places to roam and explore. Caucasian dogs make great hiking companions.

Caucasian shepherds do not require a lot of exercises—not nearly as much as some other dogs like border collies, for example—but like most dogs they do need proper mental stimulation, a fenced yard to roam, and a feeding schedule with a decent diet.

This is one breed that in particular needs an abundance of fresh drinking water in order to maintain their wellbeing, and it is generally advisable to communicate both with your breeder and your local veterinarian about the best diet to suit the unique nutritional needs of your pup.

After the nutrient-dense food, they require as a puppy, transitioning your Caucasian Sheepdog to a mature diet should focus on providing the proper balance of fiber, healthy omega fatty acids, protein, vitamins and minerals, and carbohydrates. It is recommended that these dogs eat a meat protein content of about 18% of their daily food intake.

If properly cared for, your pup could grow between 23-30 inches from paw pad to shoulder, live as long as twelve years, and weigh between 100-170 pounds. Also, aspiring Caucasian shepherd owners should take note that this dog is naturally predisposed to gaining weight—so make sure you feed and exercise them appropriately! 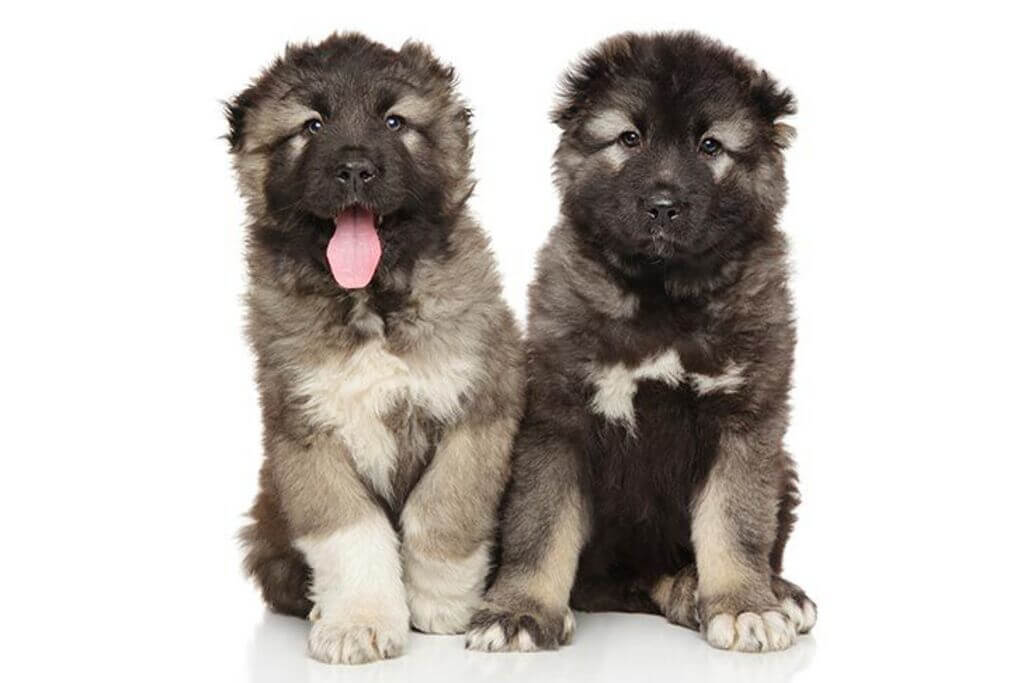 Here are some of the most frequently asked questions about the Caucasian Ovcharka!

What Are Other Names for the Caucasian Shepherd Dog?

As we mentioned, the historical origins of the Caucasian shepherd dog are somewhat up for debate, but this breed has been working with humans for thousands of years—though they have worked particularly closely with Russian and German breeders. As such, they have been called by several different names, including Caucasian dog, Caucasian Ovcharka, Caucasian Sheepdog, Kaukasische Schaferhund, and Kawkasky Owtscharka.

Is a Caucasian Shepherd a Good Family Dog?

Of course, the answer to this question is always going to depend on your circumstances. Do you have other dogs, or pets? What are their natures? Do you have children? Are they young or grown? And perhaps most importantly, have you made your pup’s role in the family clear? If properly trained and socialized, the Caucasian Sheepdog can make a loving, loyal, family-oriented guard dog and protector—but it does require competent training.

Especially if you live in a colder climate and work as a rancher or producer of livestock, investing in a Caucasian shepherd can save you headaches, worry, and lost income by protecting your flock or herd from any threats—not to mention protecting your family from unwelcome visitors! What’s more, Caucasian shepherds are at their best when they understand their “job” and are given a role in the family. This is a working dog that feels most at peace when it understands how it can earn its dinner!

How Much Do Caucasian Sheepdog Puppies Cost?

Caucasian dogs typically cost between $1000-$3000 per purebred puppy—though there is always the option to adopt from an organization dedicated to rescuing, rehabilitating, and rehoming this breed!

How Many Puppies in a Caucasian Dog Litter?

A pregnant Caucasian sheepdog will typically give birth to between 5-10 puppies at a time. If you hope to get a purebred puppy directly from a responsible breeder, it is not unusual for there to be a waiting list!

Whether you choose to adopt a rescue or go through a breeder, there’s no denying this special breed will impress you with its courage, loyalty, and intelligence—and will elevate the security for your family and livestock on your property whether faced with a trespasser or a bear. Should you adopt a Caucasian shepherd puppy, perhaps the best thing you can do is socialize it with friends and family as soon as possible, so it understands who lies within your circle of love and trust.