All You Need To Know About Chesapeake Bay Retriever

Only a robust dog can chase down waterbirds in the rough and frozen waters of the Chesapeake Bay in Maryland. A breed fondly known as Chessie is known to live through such conditions. The kind is believed to have come into existence when two puppies Canton and Sailor from Newfoundland survived a shipwreck. The two dogs had perfect retrieving qualities and were mated with local dogs. Thus, the new breed called Chesapeake Bay Retriever was born. The new dog is huge-sized and has a broad and round skull with a medium stop. Its double coat has a harsh, short, wavy outer layer and a soft, subtle inner layer that helps water-shedding and contains natural oil that is best suited to the local icy weather conditions.

The breed is a well built and sturdy gundog measuring 21 to 26 inches standing up to its shoulders. The male weighs around 80 pounds on an average. These dogs have a solid color that is dark brown, dead grass or sedge with yellow eyes well complimenting the coat. It has an intricate sense of humor as compared to other gundogs. The dogs can be well trained, but at times they like to do things their way and follow what they want. They are polite and always protect their owners but are not too friendly to strangers. A Chesapeake Bay Retriever with good exposure can be a great runner and an excellent watchdog and is a confident hunting companion.

Puppies should never appear aggressive, shy, or fearful. Physically fit and emotionally healthy, Chesapeake Bay Retriever puppies are active and interested, having shiny fur and pink gums and tongue. This determined, compassionate, and strong-willed dog can grow up to be a well-behaved member of the family with the right upbringing, guidance, and training. 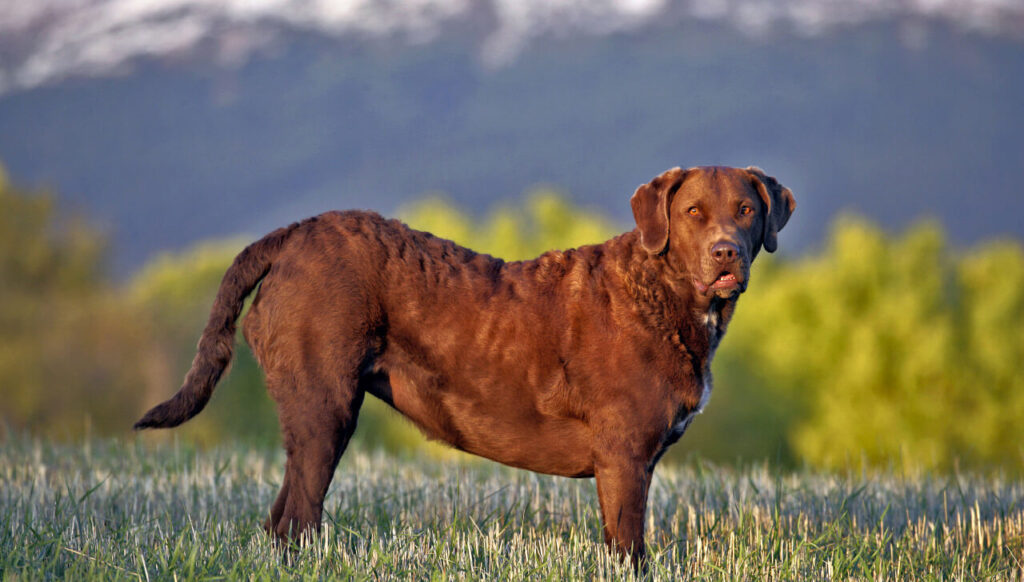 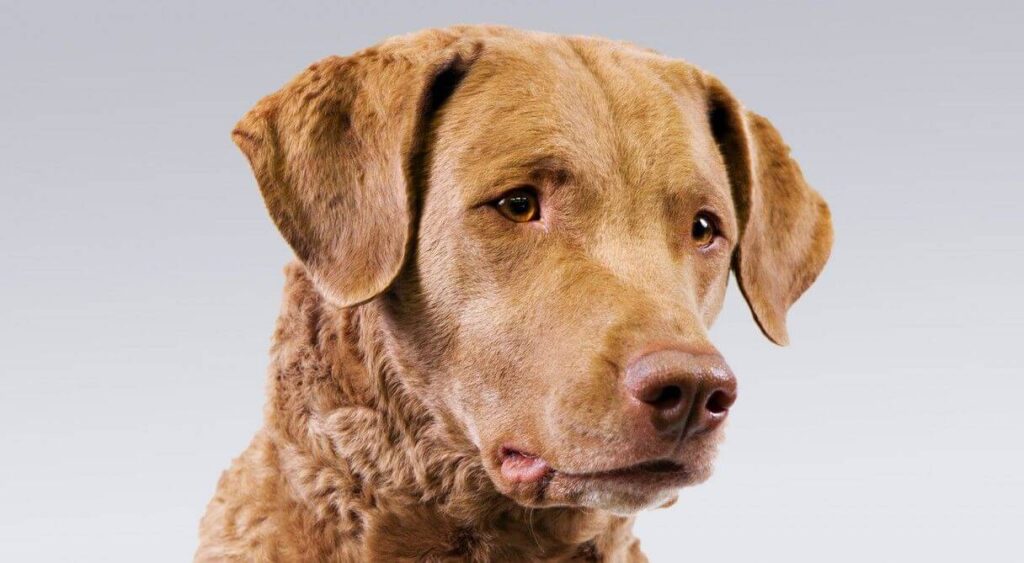 The origin of the breed can be traced back to the USA. The Chesapeake Bay Retriever is known to come from two dogs Canton and Sailor belonging to Newfoundland. They were aboard a ship for England in 1807. The ship deserted, however, both dogs and the crew were saved. Canton, a female, found a new home at Sparrows Point with Dr. James Stewart, and Sailor, a male, was adopted by John Mercer of West River.

The two canines acquired a reputation as magnificent water hounds, mainly when it came to chasing down waterfowl, and their puppies maintained their talent — and their strange yellowish or golden-colored eyes. It is not known if the two dogs were mated ever. However, in 1877 their descents from the two western and eastern shores met at a show in Baltimore. Their similarities were adequate that they were perceived as one variety, known as “The Chesapeake Bay Ducking Dog.” According to records, descendants of both dogs, Canton and Sailor were blended at the Carroll Island Kennels. From there, they advanced all through the district. 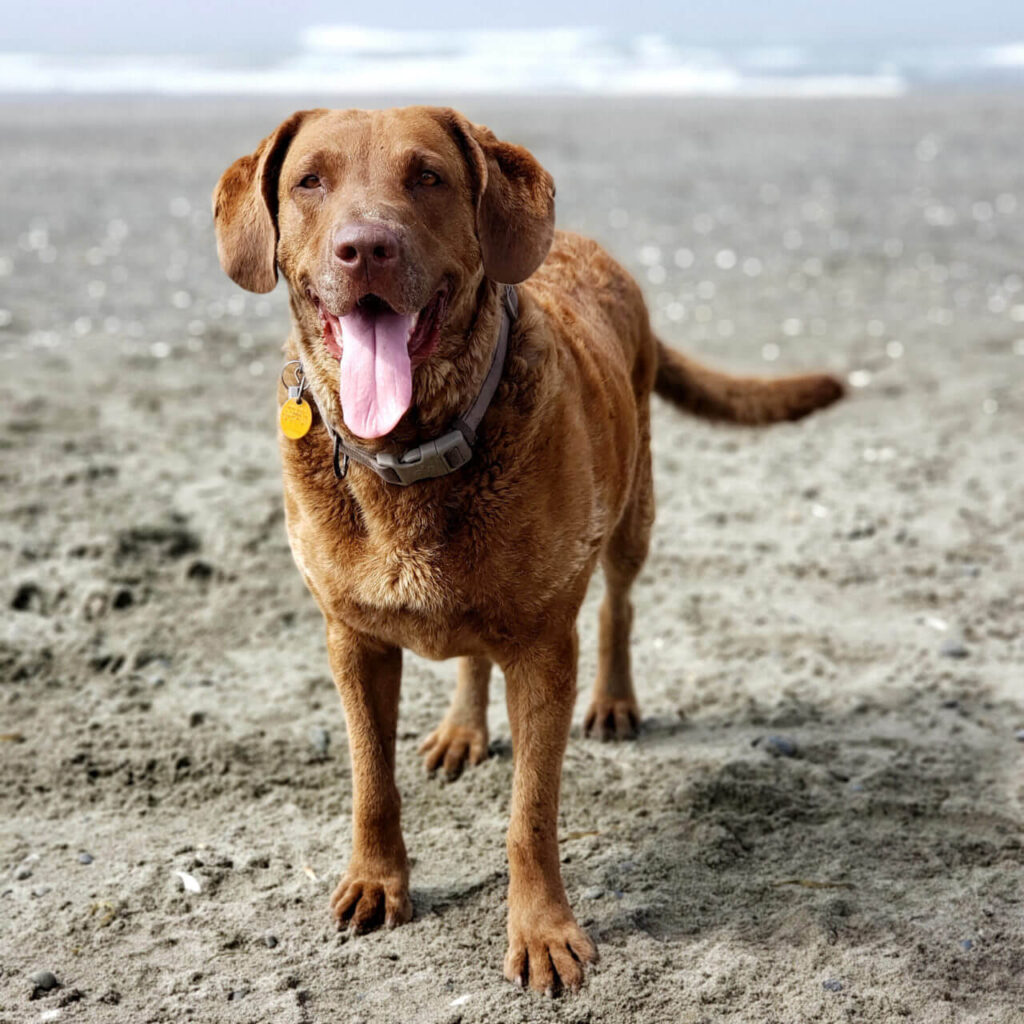 The females stand between 21 and 24 inches and weigh around 55 to 70 pounds. Whereas the males measure a height of 23 to 26 inches, and their weight is between 65 and 80 pounds.

An appropriate Chesapeake Bay Retriever has a brilliant and cheerful aura joined with mental courage, knowledge, a robust hard-working attitude, and a dynamic personality that makes him an astounding watchdog. He is persistent and requires robust and reliable training by the members of the family. We must not allow it to do anything inappropriate ‘just one time’ else it will take a long time to bring him back to track.

In case you’re giving the correct guidance, a sharp look or verbal objection is sufficient to get control over terrible conduct; increasingly dangerous discipline is pointless excess and will cause him to get inert and cheerless. 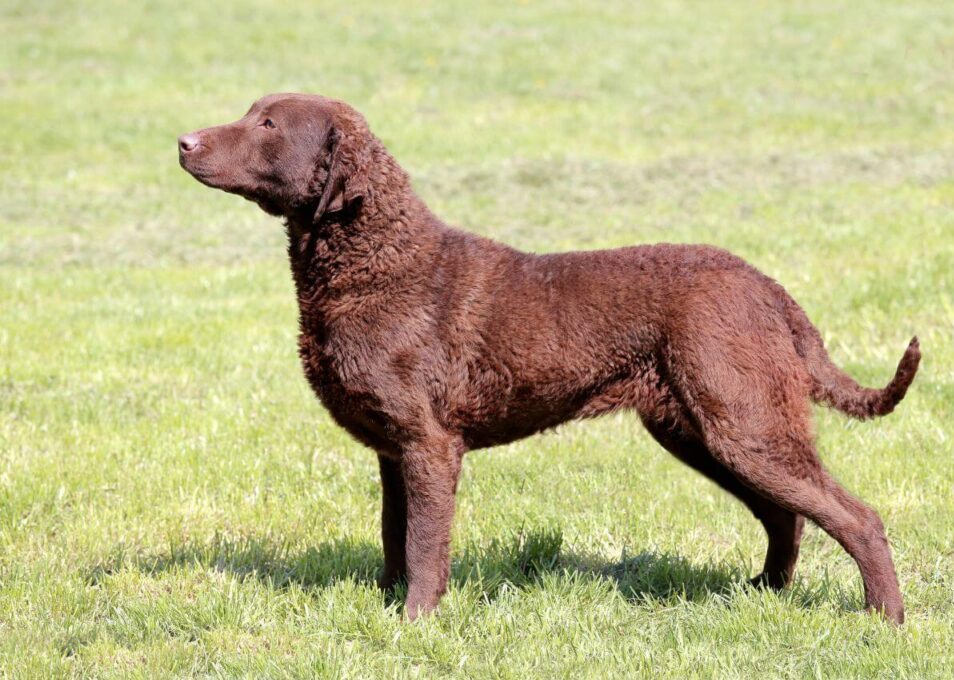 Disposition is influenced by various elements, including genetics, socialization, and training. Chesapeake Bay Retriever puppies with pleasant dispositions are curious and fun-loving, ready to play around with people. It is advisable to pick the middle-of-the-road puppy, not the one thumping his littermates or the one that is covering up in the corner. It is advisable to meet a parent, usually the mother regularly — to guarantee that they have decent dispositions that you are okay with.

Socialization guarantees that your Chesapeake Bay Retriever puppy grows up to be a balanced canine. Taking him to occupied parks, stores that permit hounds, and welcoming guests over routinely will likewise assist him with enhancing his social prowess.

As a rule, Chessies love kids; however, they will not settle up with a great deal of provocation. They can notwithstanding, be possessive of food and toys, which can make them an inferior counterpart for homes with little youngsters. They are defensive of kids. However, they can misjudge their play with their companions and respond improperly. Numerous breeders do not sell Chessie puppies to couples with kids less than eight years old. A grown-up Chessie who knows about youngsters is a superior counterpart for a family with small children. 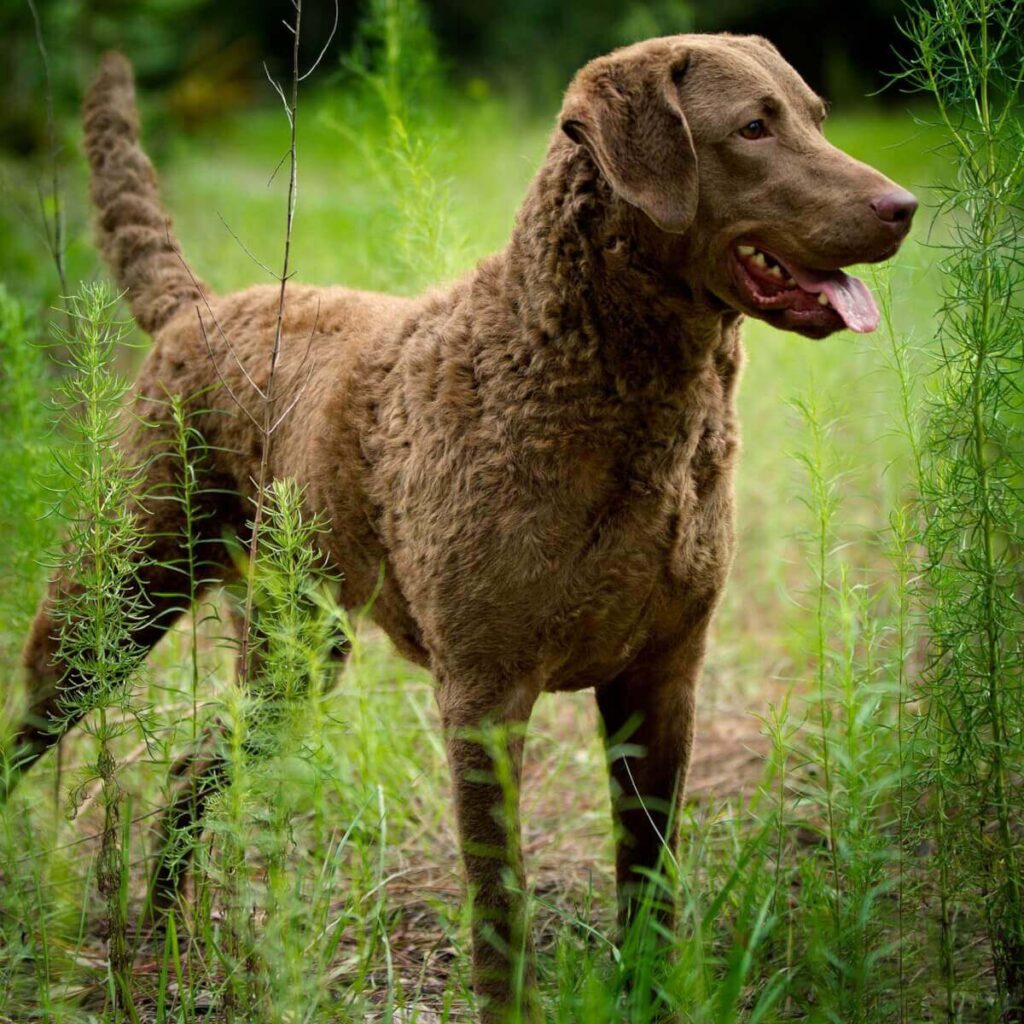 The amount of food a grown-up dog eats relies upon his size, age, digestion, and movement level. Like humans, they do not all need a similar measure of food. An exceptionally dynamic canine will require more than a habitually lazy dog. Puppies eat a great deal, however, decide in favor of slimness to ensure their developing joints. 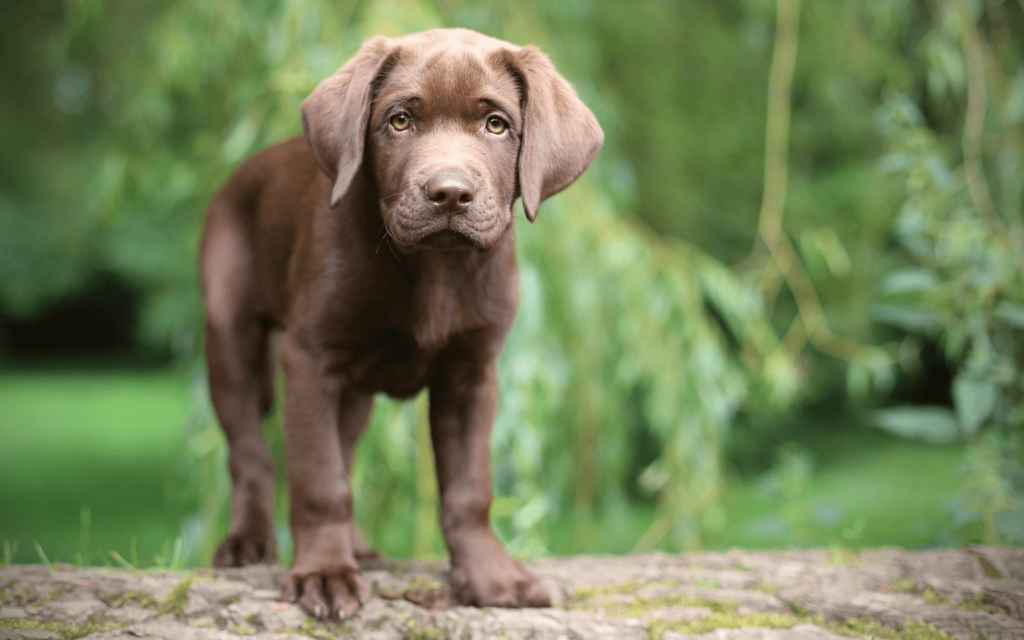 Chessies like a calm atmosphere. They are okay with the warm atmosphere provided they get enough chances to swim. Chesapeake Bay Retrievers require a lot of activity to stay cheerful, and if they do, they are peaceful house dogs who will be glad to lie down with you while you sit in front of the TV. Spend at least 20 minutes out of each day of serious work, training, water recovers, or play, or as long as an hour of an increasingly steady walk. Chessies like to swim and progress if swimming can be part of their everyday practice system. They are a rural or country breed and are not a city dog. For more information, visit Petsnurturing.