Rusty spotted cats also known as Prionailurus rubiginosus is one of the smallest members of the cat family and the smallest of cats found in Asia. Historical records of its origin are found from Srilanka and India but some recent records of its existence have been found in the Western region of Terai in Nepal. In the IUCN Red List, its wild population has been listed as near threatened as it is affected by habitat destruction. Initially, their scientific name was Felis rubiginosa which was later changed to Prionailurus rubiginosus in 1939. Three subspecies of the Rusty-spotted cat are recognized:

Spotted cats look extremely impressive and their spots give them a great resemblance to bigger, wild cats like cheetahs and leopards. This feature makes them extremely popular and increases their demand around the globe because who would mind a thrilling sight of a smaller version of a big cat roaming around their house?

They are a rare species and they are only found in 2-3 countries throughout the world. It’s very hard to spot a Rusty-spotted cat in the wild as they do their best to stay out of sight. Their nocturnal nature makes them harder to spot.

The coat of the Rusty-spotted cat is soft and short and it is known as a smaller, washed-out, or smaller version of the big cats. Their tail measures half the length of their body and is rustier colored, it has less distinct spots and is thick.

The fur of the Rusty-coated cat is short and reddish-grey with dark rusty spots on the back and flank. Extending from the eyes they have 4 blackish lines running back over the head until the neck. They have horizontal bars on the chest and legs.

The head of Rusty-spotted is rounded and has large eyes that mark with a white streak along the inside edges. Their large eyes aid their nocturnal hunting. Each cheek of the cat marks with 2 dark streaks and the back, sides of their body show reddish-brown blotches that merge into lines.

The belly, throat, chin, inner side of legs, and chest of this cat are white, covering with bars and large dark spots. They have small, rounded ears and black soles on their feet.

The rusty-spotted cat rivals the black-footed cat and is the smallest cat on the planet.

They are also known as the hummingbird of the cat family due to their speed, size, and agility as compared to the small yet rigorous hummingbirds. 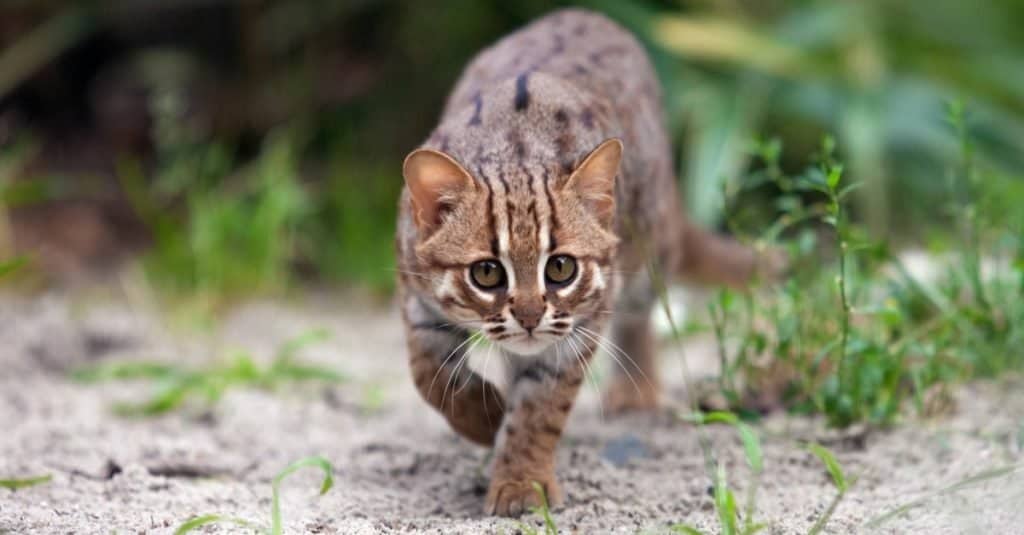 Rusty-spotted cats are solitary and occupy forests and as of recently, human-dominated areas. They are terrestrial animals but also exhibit arboreal tendencies and they hunt during the night and spend their days resting or hiding in the trees or hollow wooden logs.

They hunt on the ground but climb trees to escape predators. Just like most territorial animals, they mark their territory by spraying urine. They hunt by ambushing their prey by jumping on them from a hiding spot. 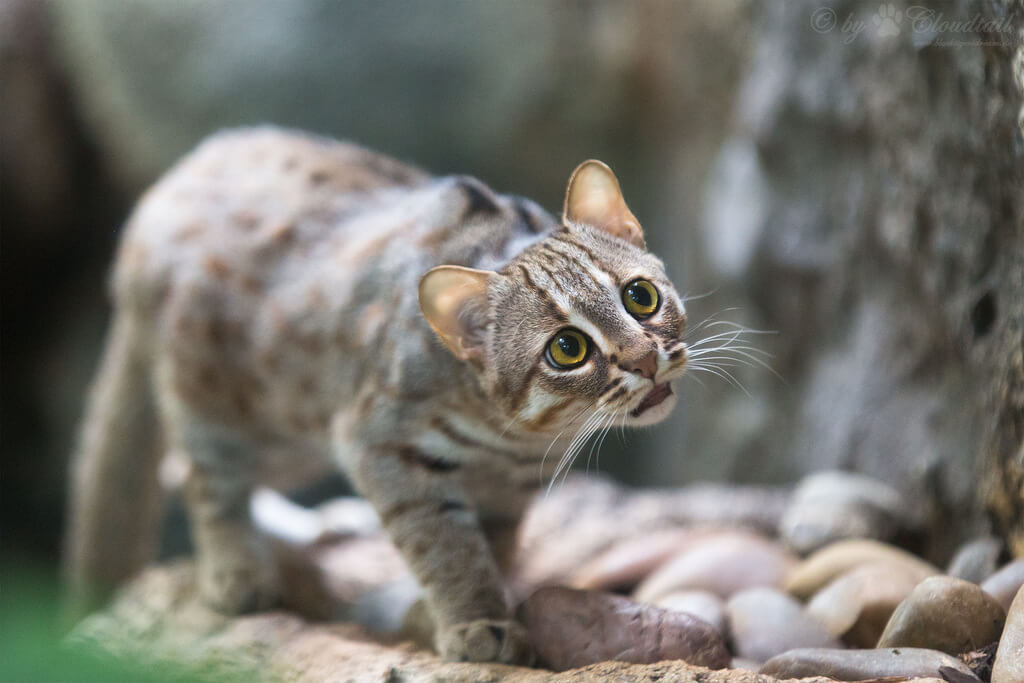 These cats are predominantly wild, thus the suitability of the rusty-spotted cat as a pet is questionable and most experts advise against it. No matter how cute cats appear, they do not trust easily irrespective of how much they see you daily.

Their ambush and hunt nature make them prone to attacking strangers instinctively. Rusty-spotted cat pets are not known to thrive well in captivity as it takes them a very long time to adapt.

Rusty-spotted cats are crossed with domestic cats and the hybrids are better suitable as pets. One might still face more challenges having a spotted hybrid cat as it may retain some of the wild traits. Know more here about Is Your Cat Shaking His Head Like Parkinson’s? 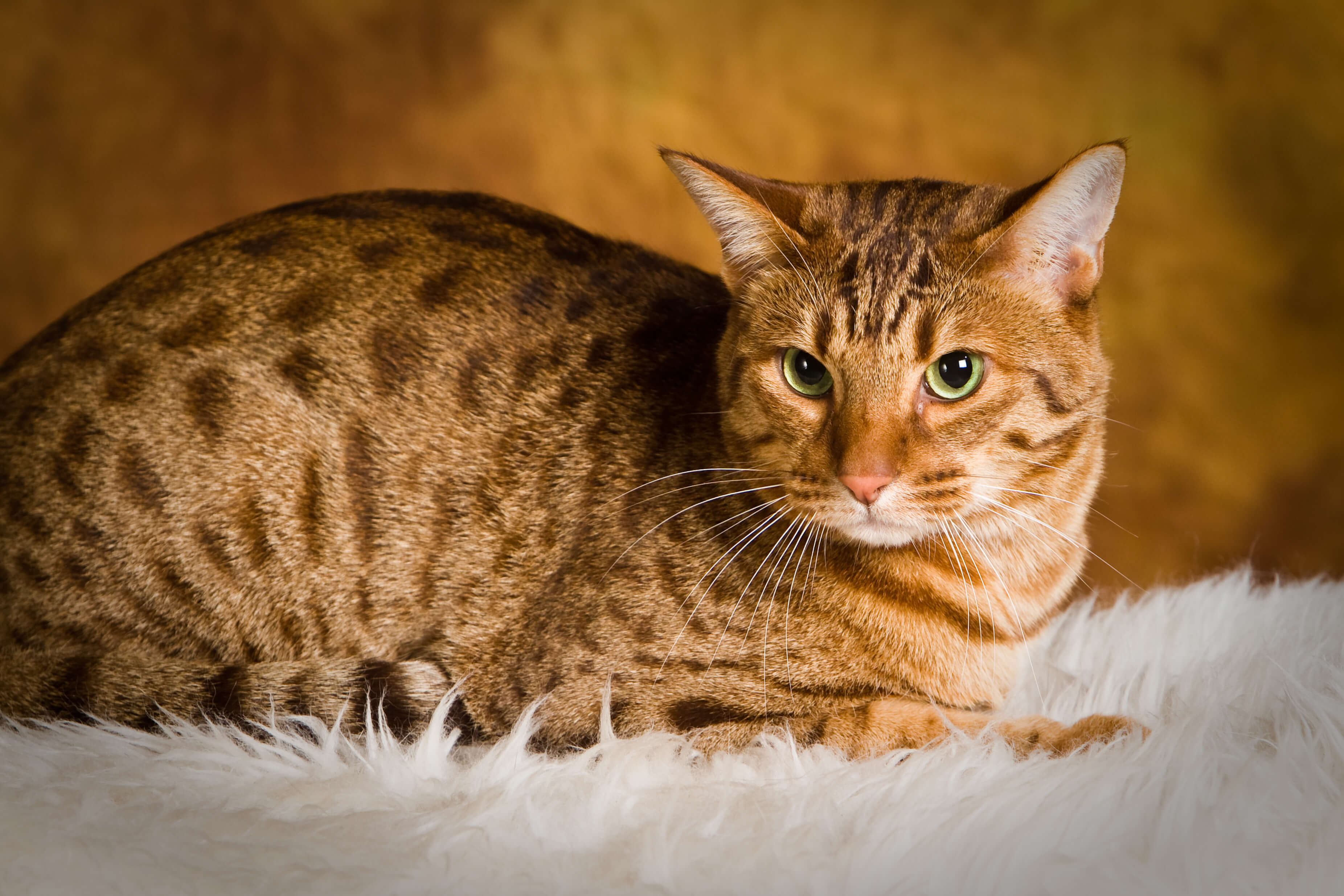 Rusty-spotted cats are complete carnivores and thrive on meat. Their diet includes small rodents, frogs, lizards, birds, and small amphibians. They even devour dead prey at times. In the wild, they are capable of killing prey thrice their size.

They ambush their prey and hunt them by jumping on them from a hiding spots in bushes or trees. 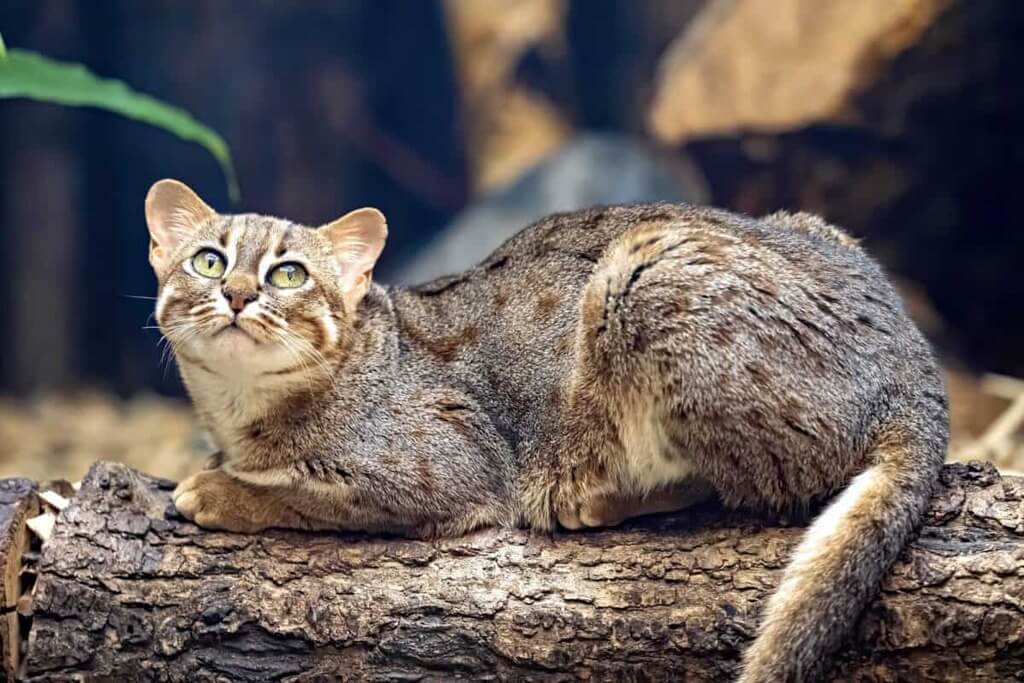 Their gestation period is 2 months and the kittens stick with their mother until they can take care of themselves on their own. Rusty-spotted cat kittens are considering adults when they reach sexual maturity. 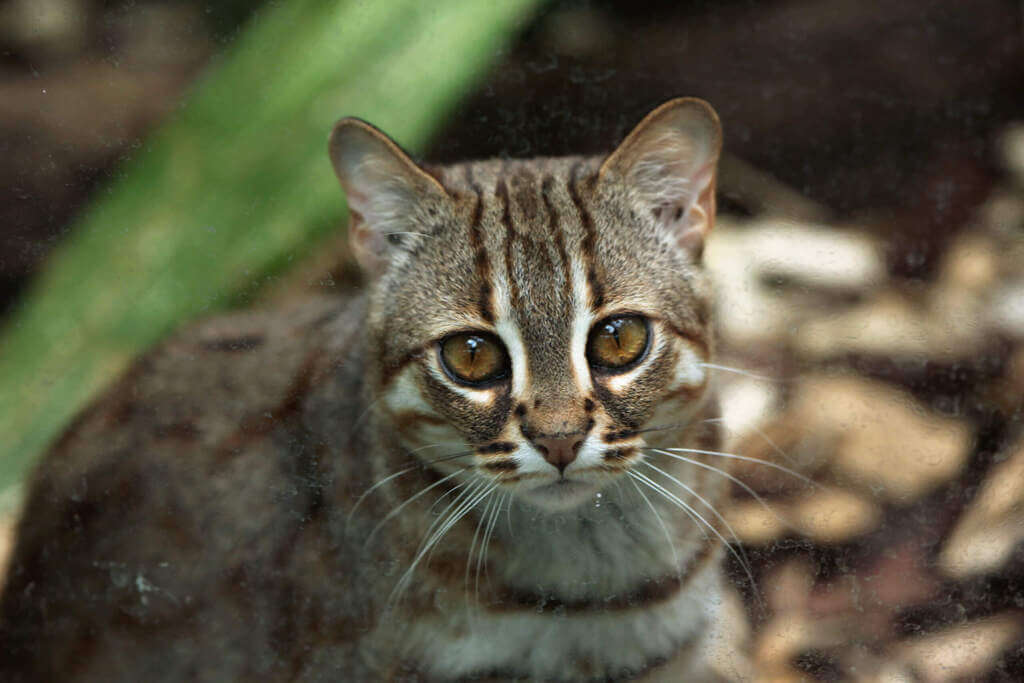 You may be wondering how much is a rusty spotted cat cost. The price could range from 1500$ to 20000$ depending on a lot of factors.

Since they are declared threatened; it is not advisable to keep them as pets as they do not thrive well in captivity. Irrespective of the rusty-spotted cat price, they are not suitable as pets.

Although the similar-looking domestic variants can be kept as pets. 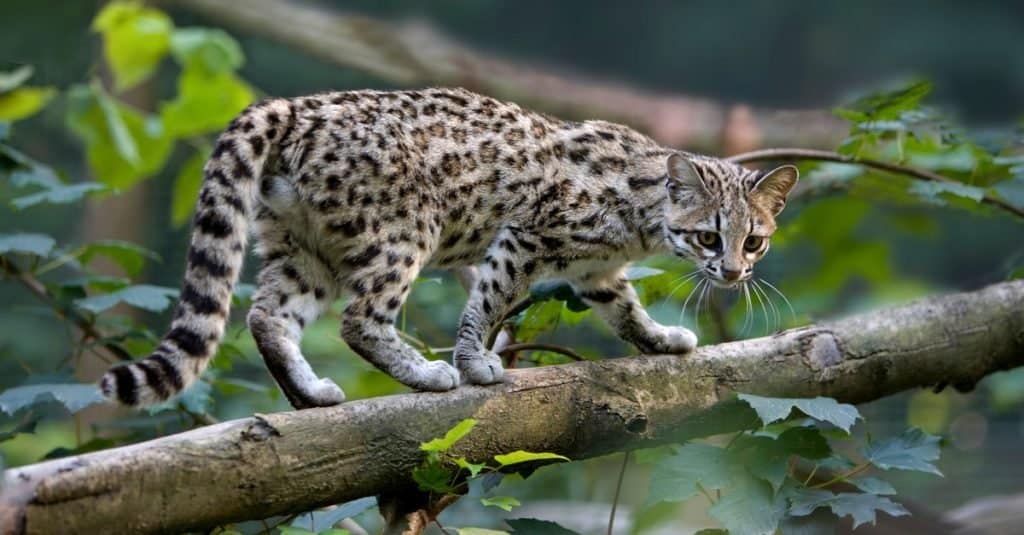 There have been no reports of intentional breeding but these cats do tend to naturally mate with domestic cats. Usually, a close relative of the rusty-spotted cat known as the Asian leopard cat is used in these crosses.

So the better and more correct term would be Best Spotted Cat Breeds and they are as follows: 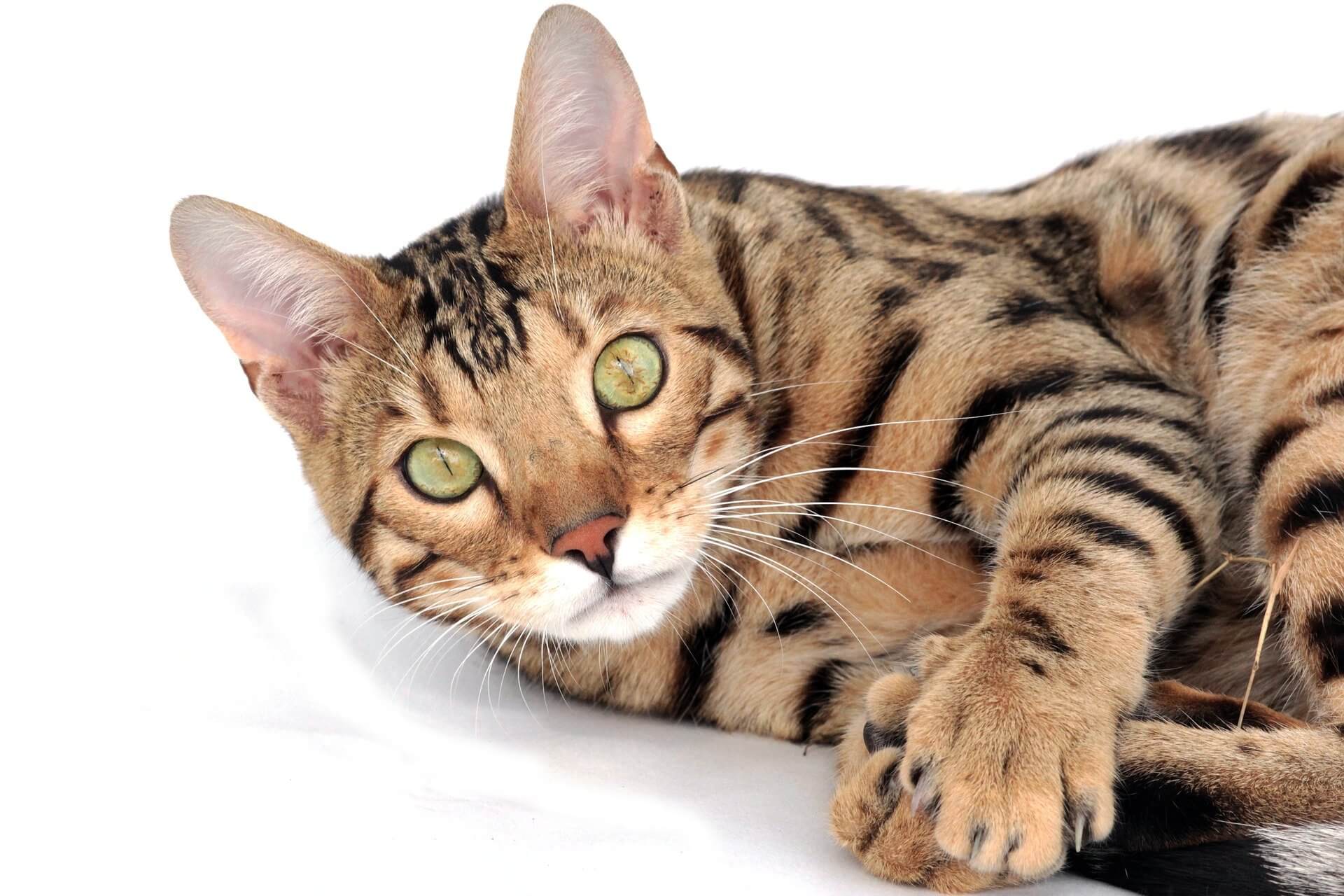 Bengal cats are famous for their spots that give them a wild look. These cats love water unlike the Rusty spotted cats and have friendly personalities. 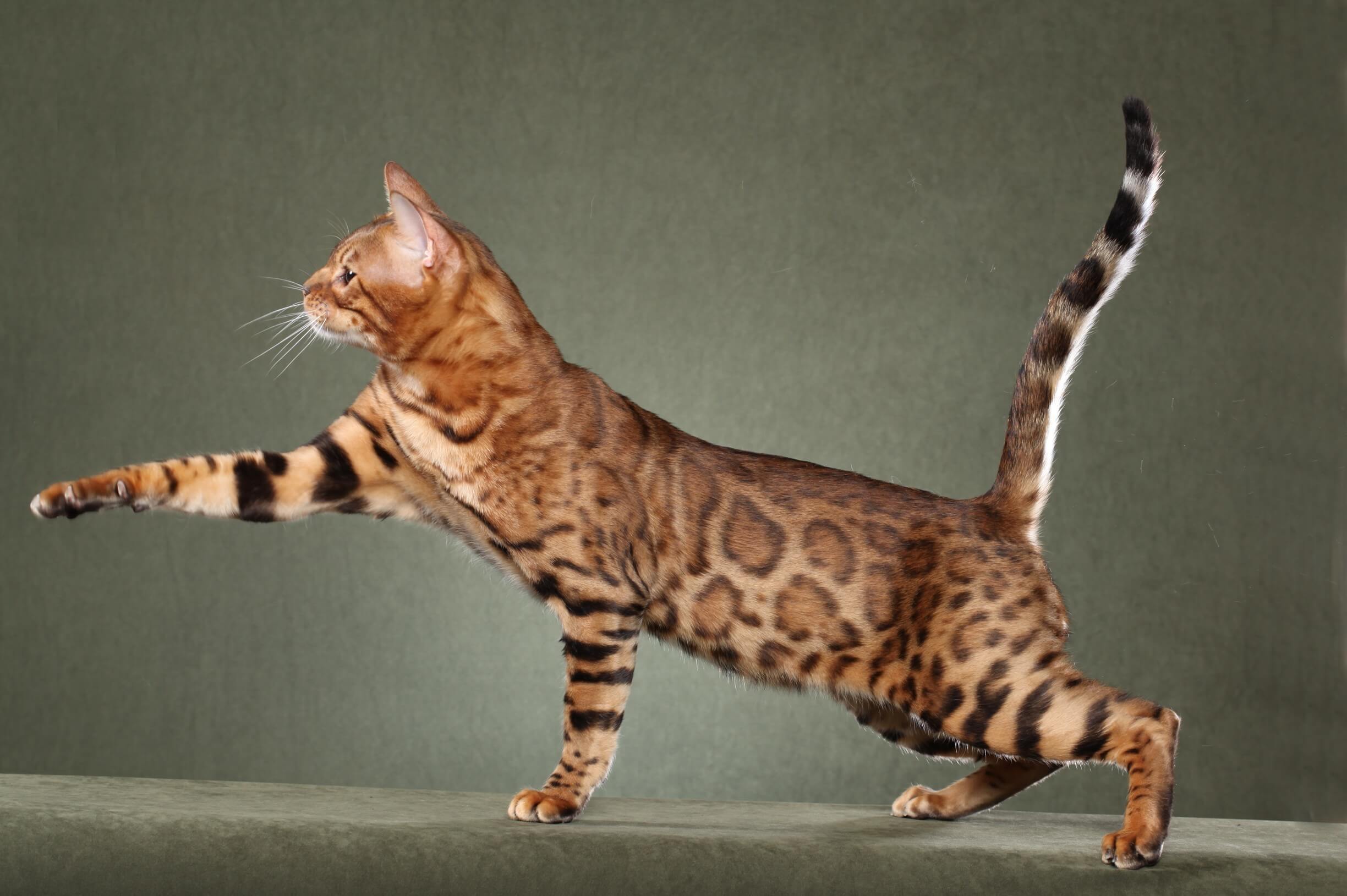 They are also spotted hybrid cats that are bigger than the Bengal cat. They are a hybrid between a domestic cat and a serval. Savannah is the largest breed of rusty spotted cats as pets. 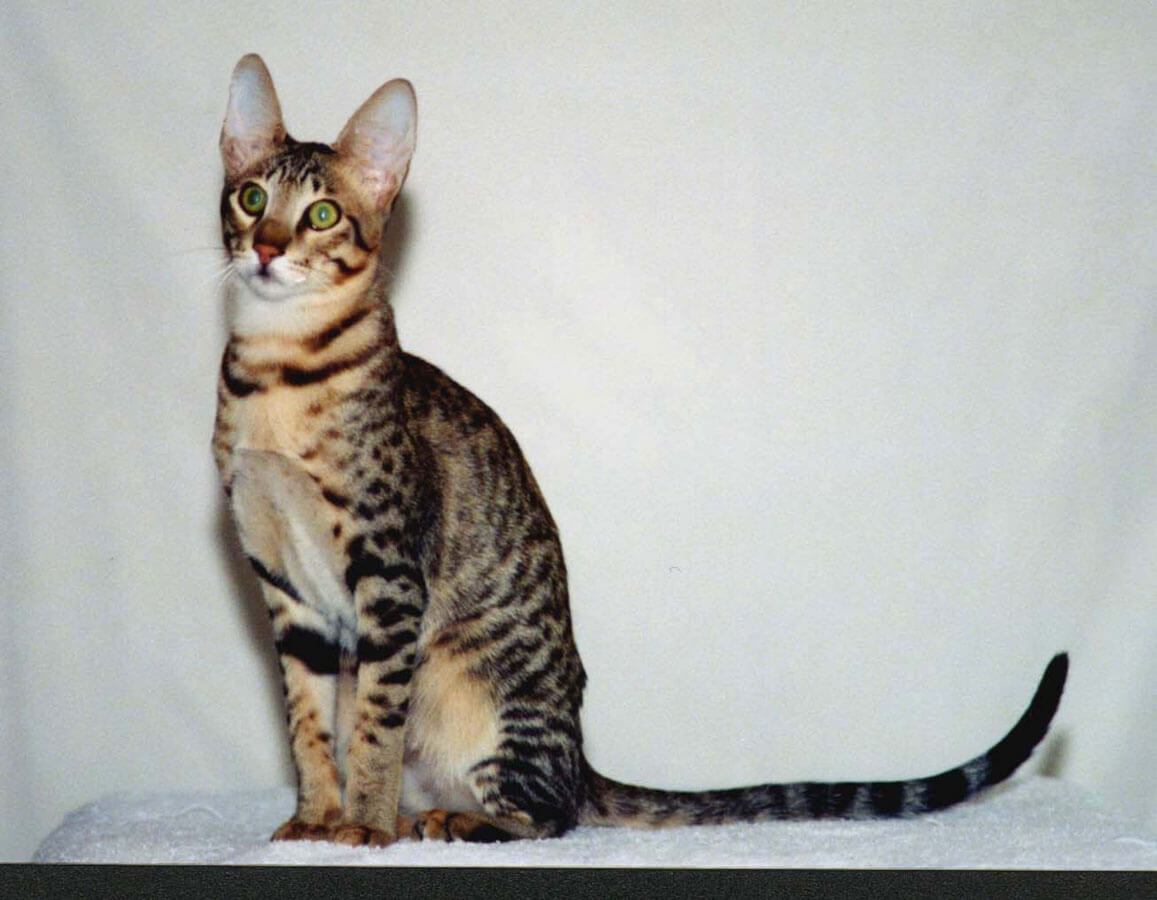 A cross between the Bengal cat and the oriental shorthair, these spotted cats maintain their exotic-looking, spotted coat and look like the savannah cat. They are active and exhibit agility. 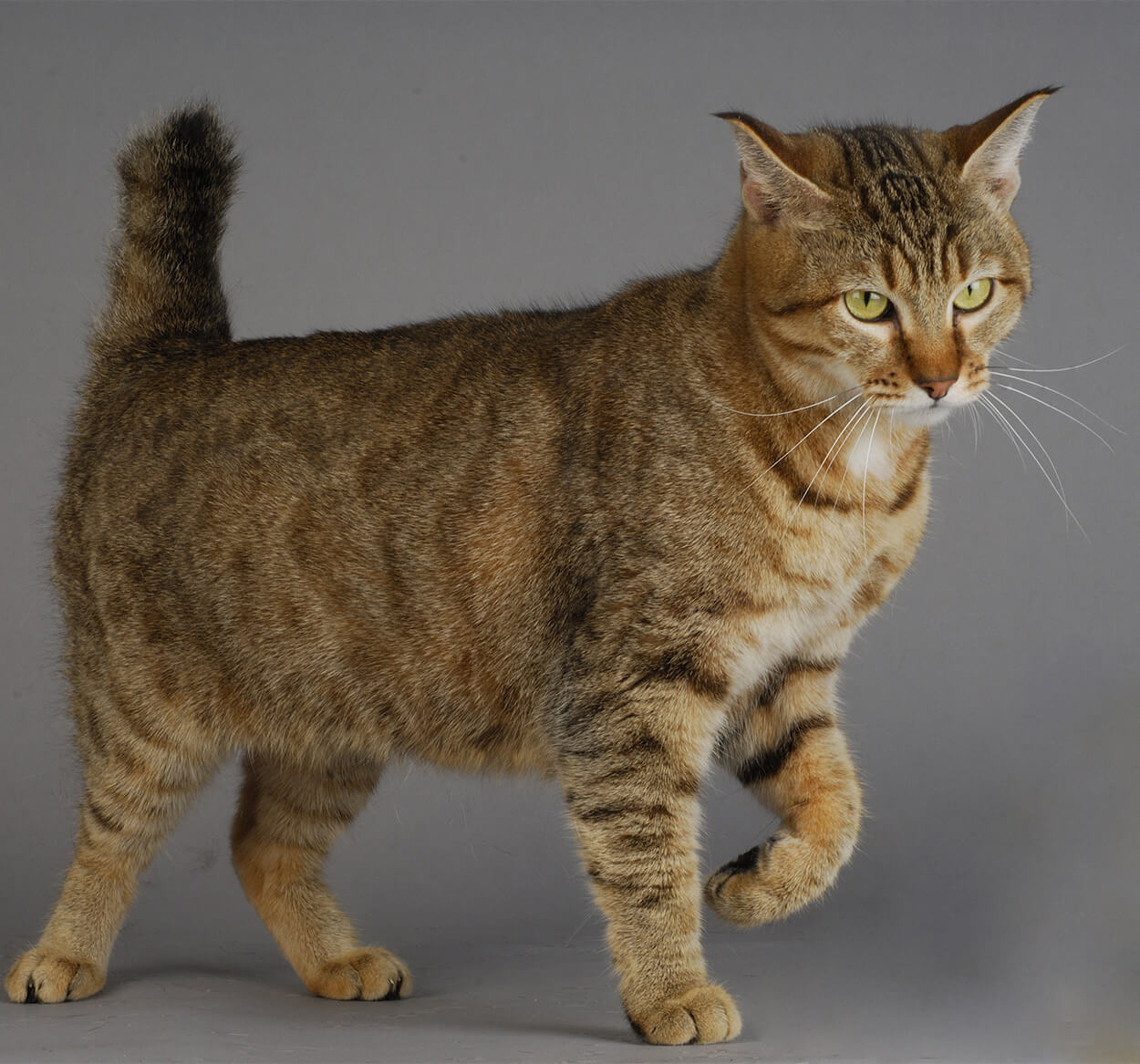 These cats are naturally occurring hybrids and probably the only cat of this sort. They have bobbed tails and ear tufts and are known for making chirping noises. They have a sociable temperament.

Coat: short-haired, sometimes may have long hair that is red or brown with spots. 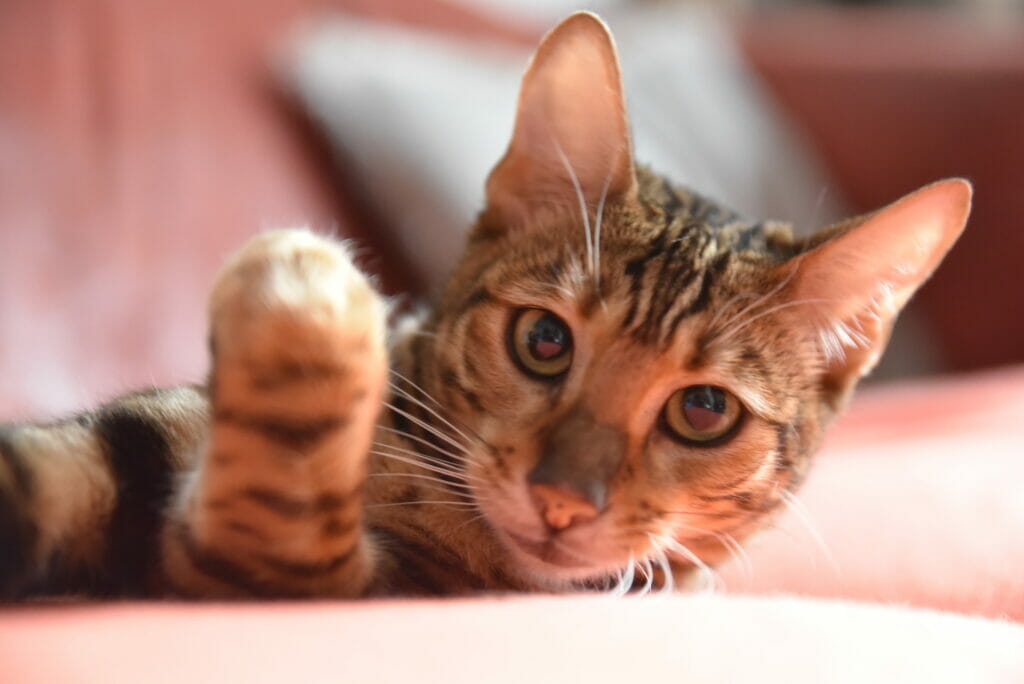 The Toyger, as the name suggests, has Tiger-like stripes developed by crossing a Bengal cat with the domestic tabby cat. They are highly trainable and friendly, their playfulness makes them amazing as house cats.

Coat: Orange to brown with black stripes. They have short hair. 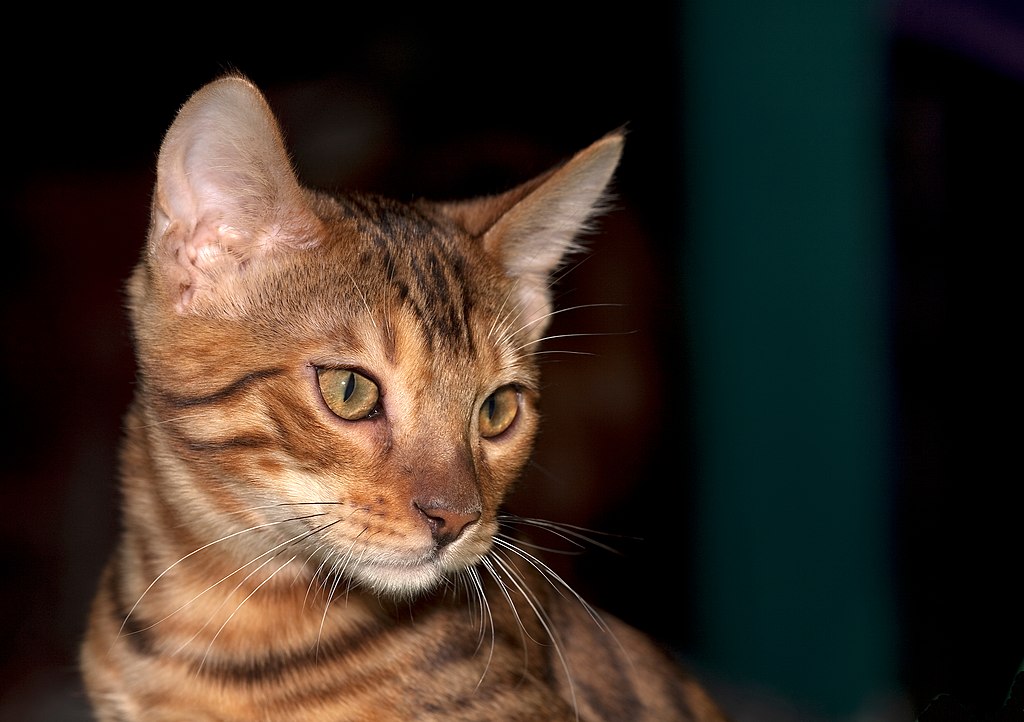 Cheetoh is a gentle cat with wild looks. It is a spotted cat that is a hybrid of Bengal cat and ocicat. They are large but have a friendly temperament. 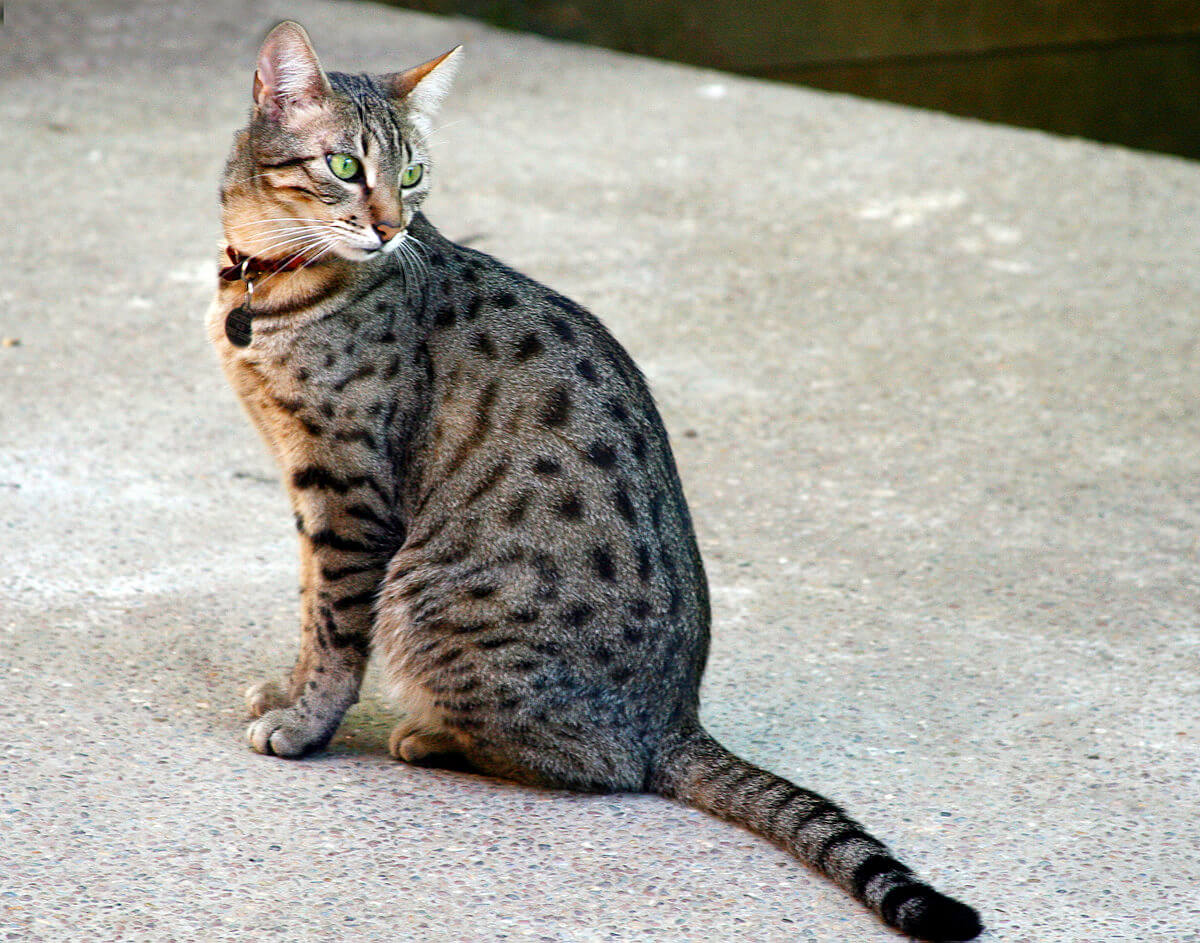 It is one of the fastest-spotted breeds of cats. They are friendly and loyal and considered a good choice of pets. They have a high level of energy and are affectionate. 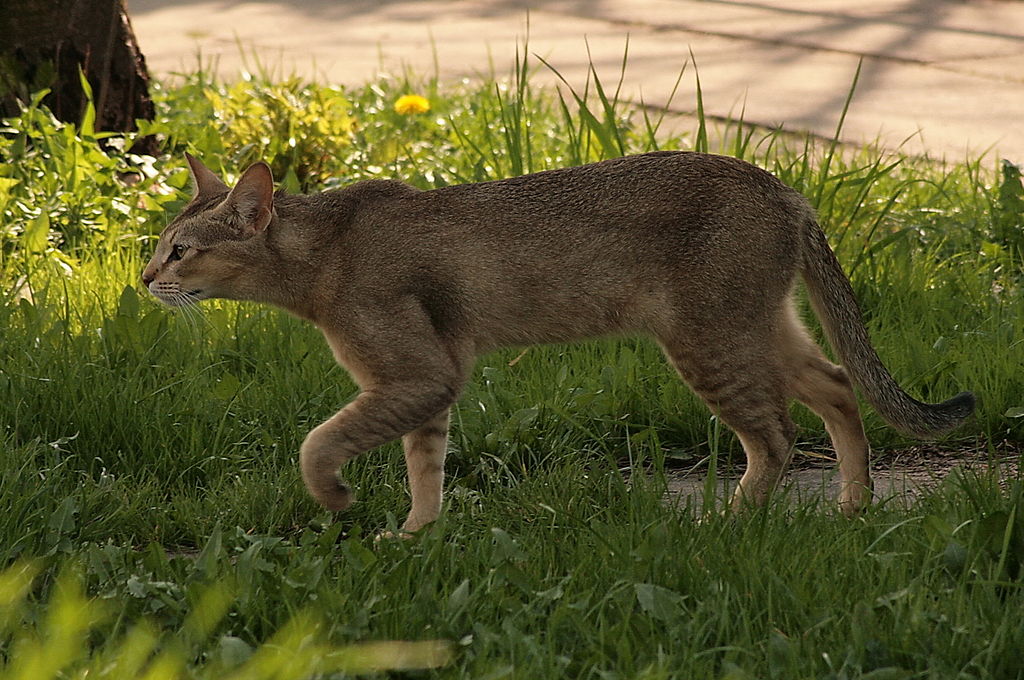 A cross between jungle cats and domestic ones. This spotted cat breed is playful and enjoys the company of people as well as other pets. Their build is such that it supports running and jumping which makes the cat athletic and active.

Lifespan: up to 14 years

We advise against owning the rare Rusty spotted cats which are incredibly hard to tame and have a rough time adapting as a pet, we instead suggest you get one of the similar-looking domesticated breeds of spotted cats. They are equally gorgeous and have wild looks combined with a playful personality and love for humans.

These spotted breeds of cats make wonderful family pets as they get along with both humans and other pets.