Do you dream of having a puppy who is always ready to cuddle and play with you? Or looking for a furry friend that easily adjusts to a city apartment?Look no further and get a Blue French Bulldog!

In particular, the French Bulldog breed, the blue dog, is one of the several French Bulldog colors. These canines are loyal, playful, and easy-to-train small dogs that have a distinct short coat in blue color. They have flat faces, big eyes, and one of the most noticeable features, French Bulldog bat ears.

However, the grey-blue coat color is not a standard coat color. Hence, it is not recognized by the many official dog breed associations, including the American Kennel Club (AKC).

This is a common dog breed that is seen in many parts of the world. As this dog breed has a small size and fewer needs, most of the city residents choose this adorable dog as their family pet.

Do you also have plans to get a blue french bulldog and want to know more about this breed? You’re on the right page!

Today in this post, we’ll tell you everything about the blue merle french bulldog.

In this blog, you’ll learn about the blue french bulldogs:

Let’s start with the summary table. 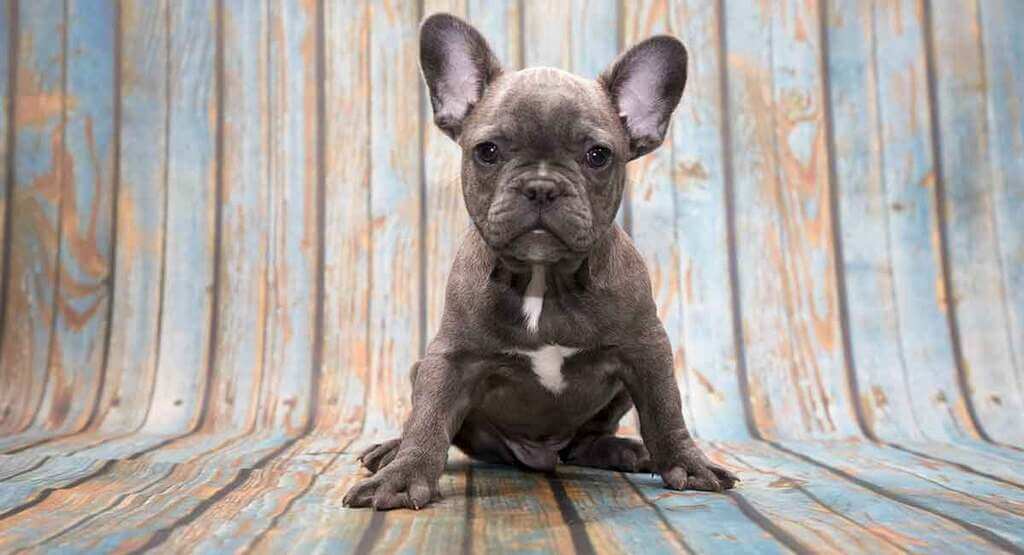 Wondering what a blue french bulldog is?

Even though there are some differences between a Blue French Bulldog and any other color of French Bulldog, the origin and history aren’t that different. You’ll be surprised to know that the French bulldog actually did not originate in France. The blue french bulldog originated in Nottingham, in the North of England, in the United Kingdom.

These canines are extremely friendly and are great companions. Also, they can easily live in small apartments and homes.

Here is the summary table of the blue French bulldog: 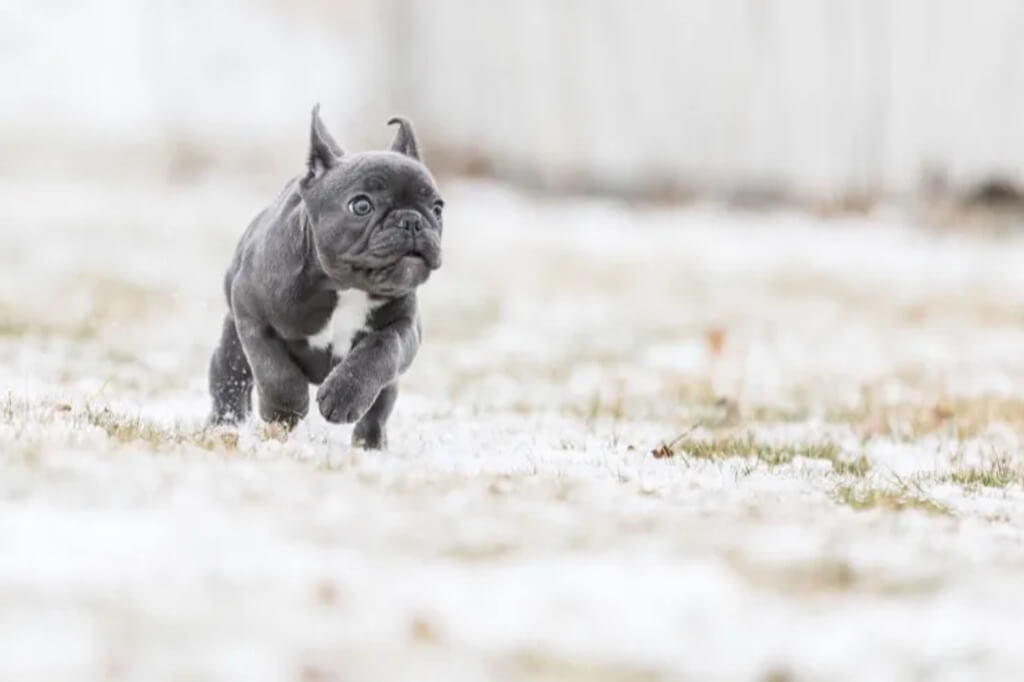 The Blue Merle French bulldogs have small sizes, but their confidence is always high. This breed, in particular, is known for its personality and facial features. They have a smushed-in face and bat-like ears, which help them to stay alert and attentive to their surroundings. They have short tails and small legs.

So, another great feature is their unique blue color coat!

To create this type of rare colored blue french bulldog, a breeder has to select a blue French bulldog and a merle Frenchie. Merle is a dominant gene, that’s why there are high chances of getting a blue merle puppy litter. 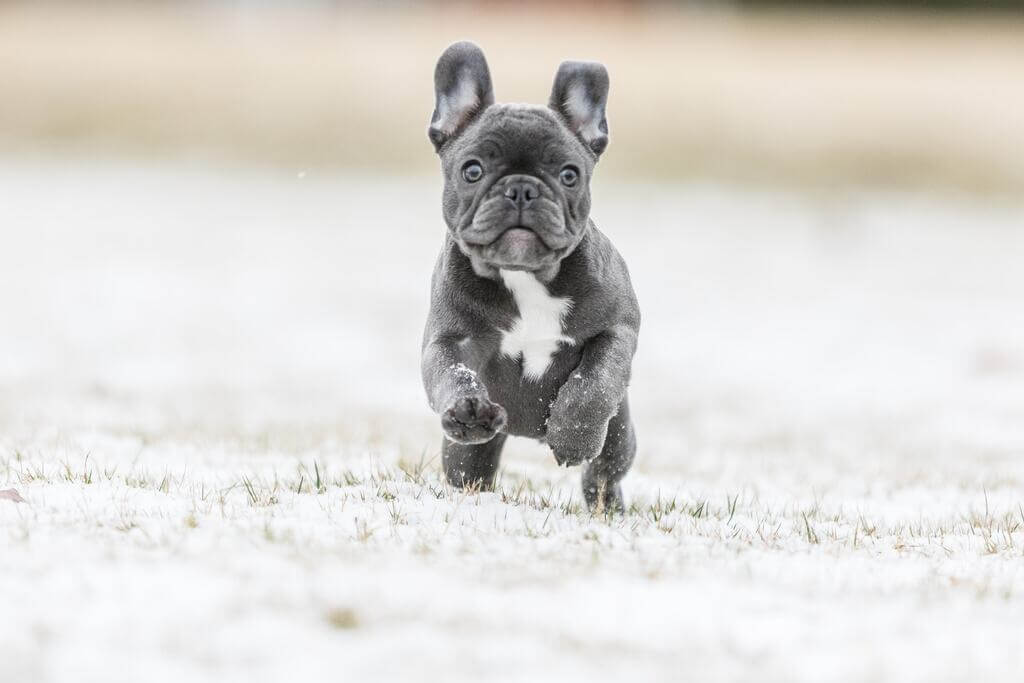 Here’s the chart of blue Frenchies’ height, weight, and age chart. You can determine the full grown blue French bulldog’s growth from this. 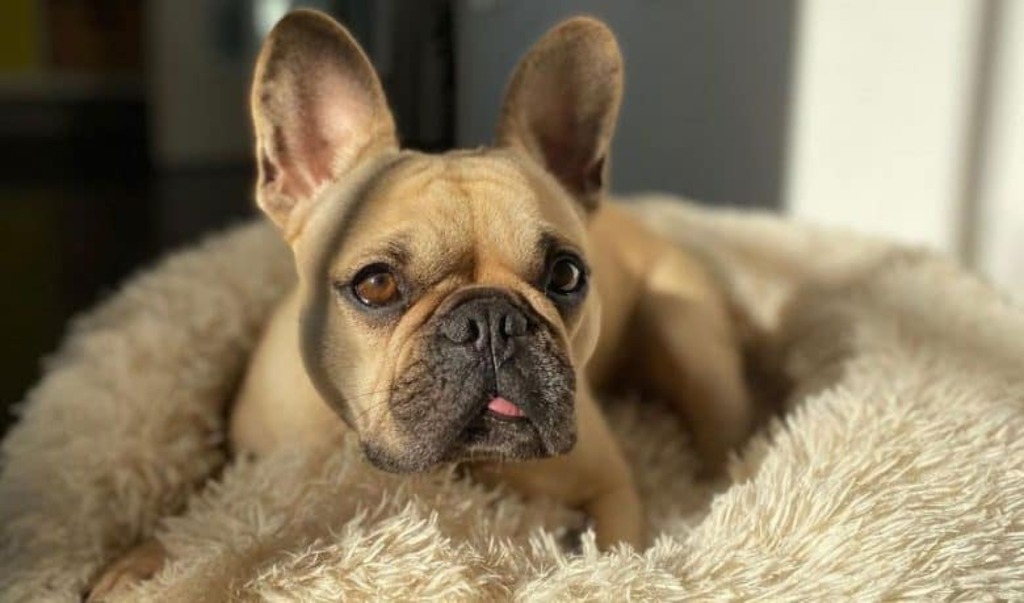 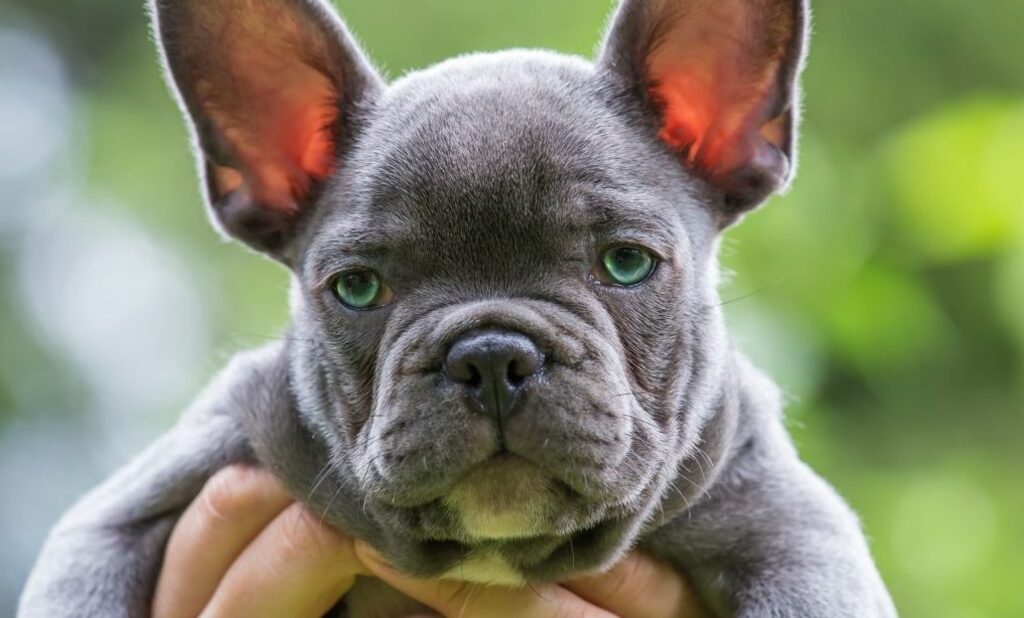 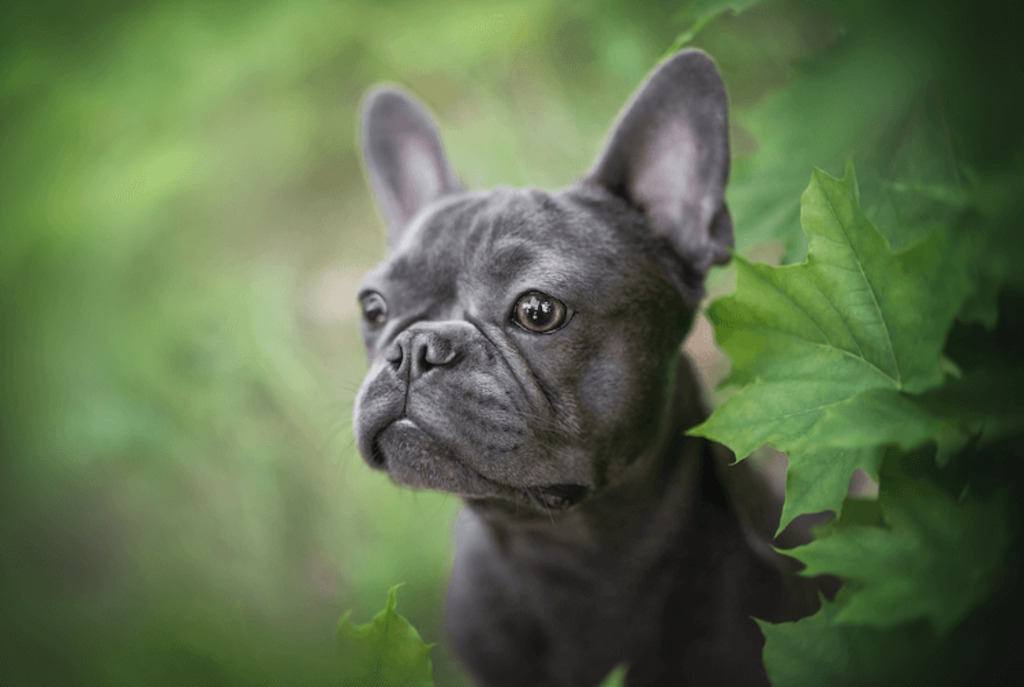 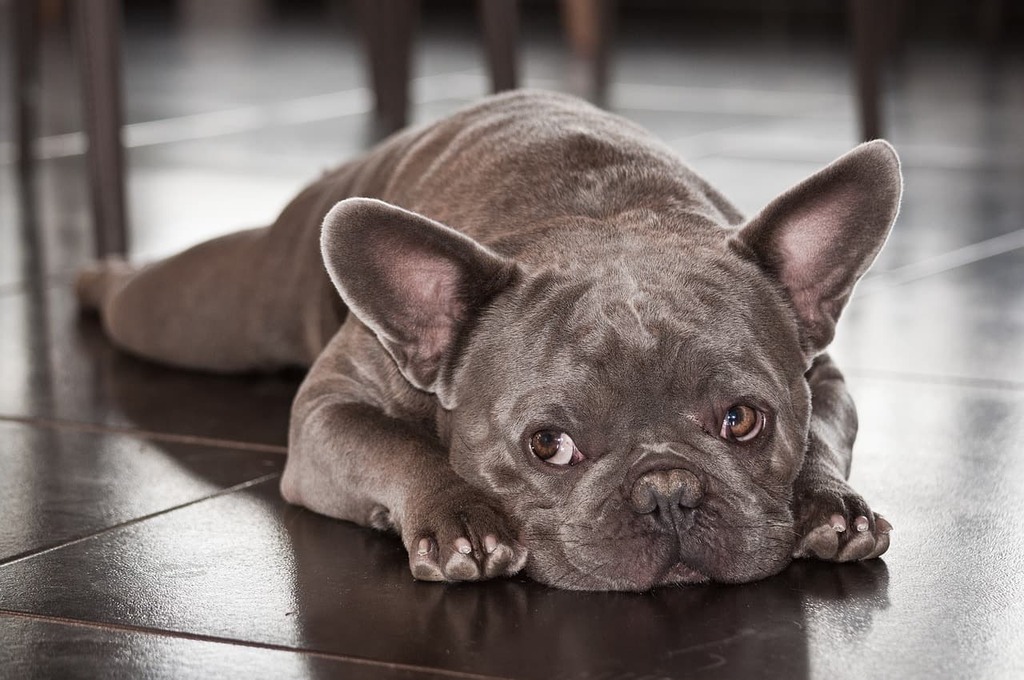 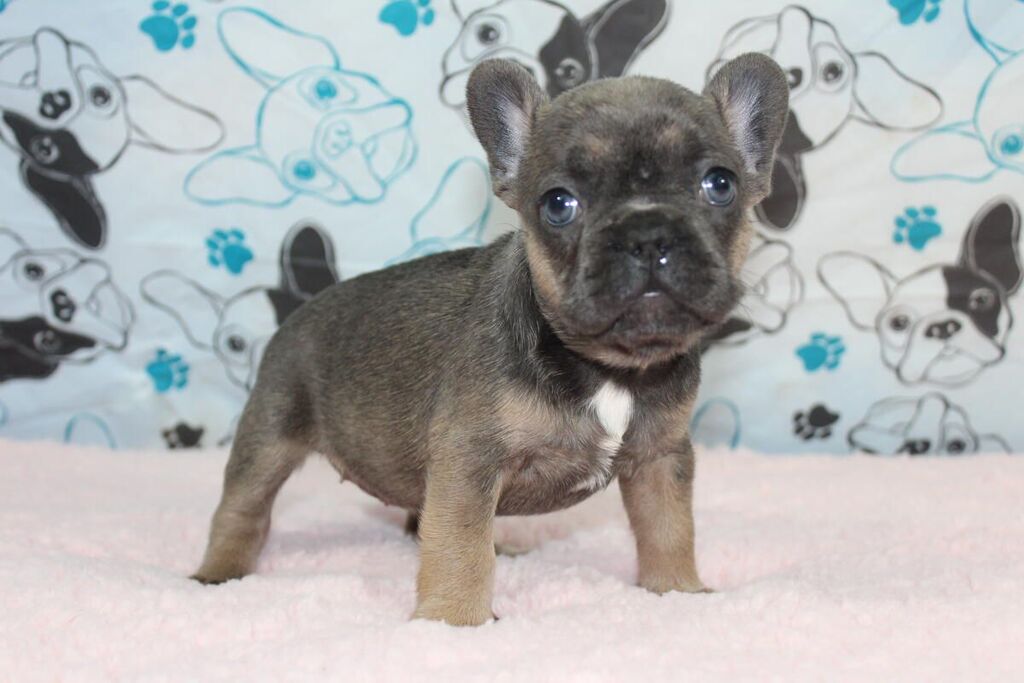 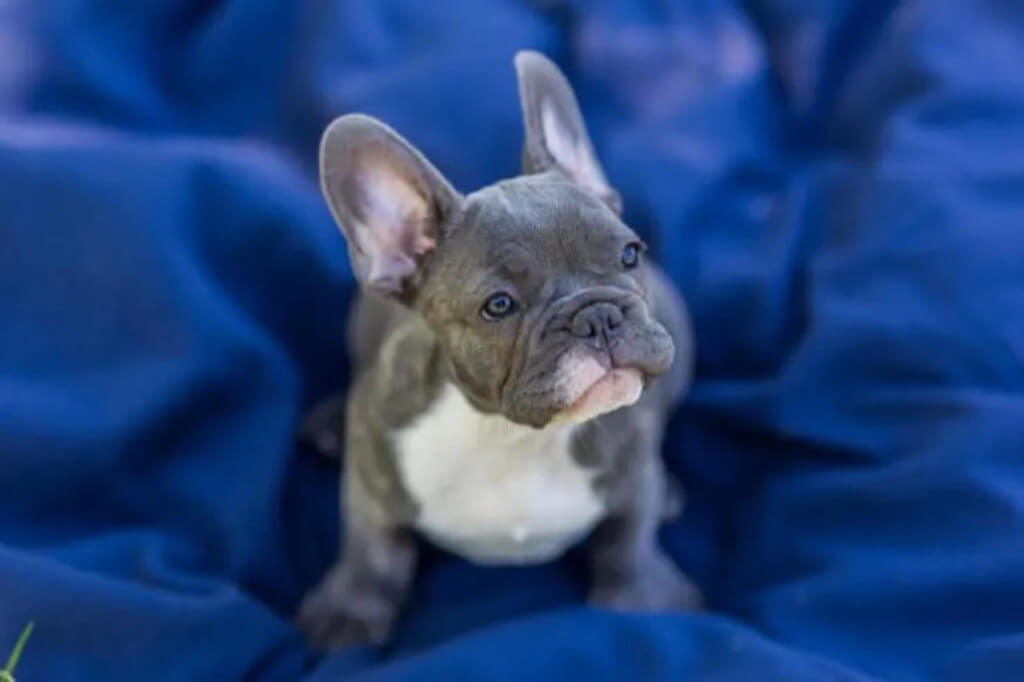 If you want to buy a french bulldog puppy, you have to consider many things, such as food, grooming, and other requirements. Here are some of the most important things to take care of a blue Frenchie dog:

This breed specifically works best on a low-fat, moderate-calorie diet, including some regular protein sources. These dogs also don’t like to exercise much, so in general, their appetite is pretty low. So, give them between 1-2 cups of food each day.

However, make sure to provide them with high-quality food. You can go with the one which has small kibble instead of bigger ones. These dogs can easily eat smaller kibble.

As we previously mentioned, Frenchie is a low-activity calm dog that doesn’t do exercises much. These canines have a jumpy energy level that will spend in short bursts of excitement. These dogs always remain neutral, which means they never go over the top. So for activity and exercise, they prefer slower and low activities. Another major reason behind this is that they have brachycephalic faces, making it difficult to breathe sometimes.

So what are the exercises for the blue french bulldog?

You can take your dog outside for slower walks. Make sure to engage them in mild exercises, as intense activities can overexert and exhaust them immediately. So, these puppies only require 30 minutes of activity each day.

This breed has short fur or coat, which means their grooming is easy and will not take much time. They also don’t shed as much, so only minimal brushing is required. Just brush them once a week, and that’s it!

Also, make sure not to bathe them too much, as these canines are prone to skin dermatitis and other serious skin issues.

Apart from this, you have to brush their teeth regularly because they have brachycephalic faces. This can cause many tooth and mouth diseases. You should also clip your dog’s nails at least once or twice a month. 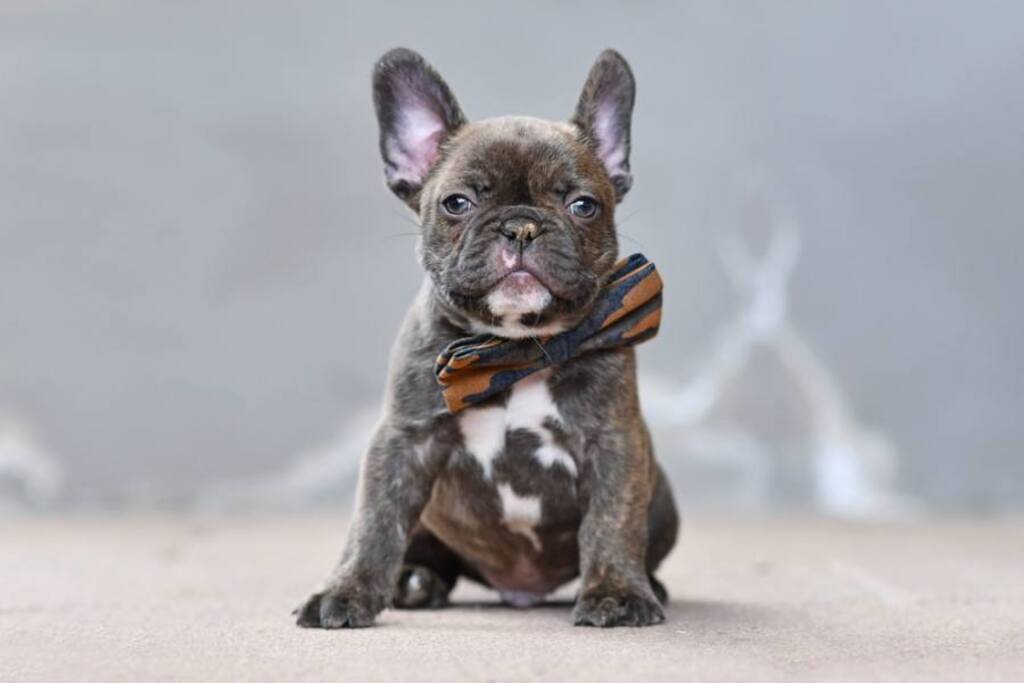 The Blue Frenchies are one of those dog breeds which are laid back and don’t like to do much. These playful and alert pups love company. And because of this, many owners describe them as “Velcro Dogs.”

From playing fetch games to simple walks, these pups like simple exercise and daily activities. These dogs are also easy to train when it’s done in a positive manner. You can get this puppy even if you’re living in a small house, as they can easily adjust to small and compact spaces and those environments.

A full grown blue french bulldog is loyal, loving, and affectionate towards his family. They behave well with elders, kids, and other pets. Apart from this, they love to snuggle with their owners. Sometimes they also have separation anxiety when left alone for many hours.

How to Train a Blue French Bulldog 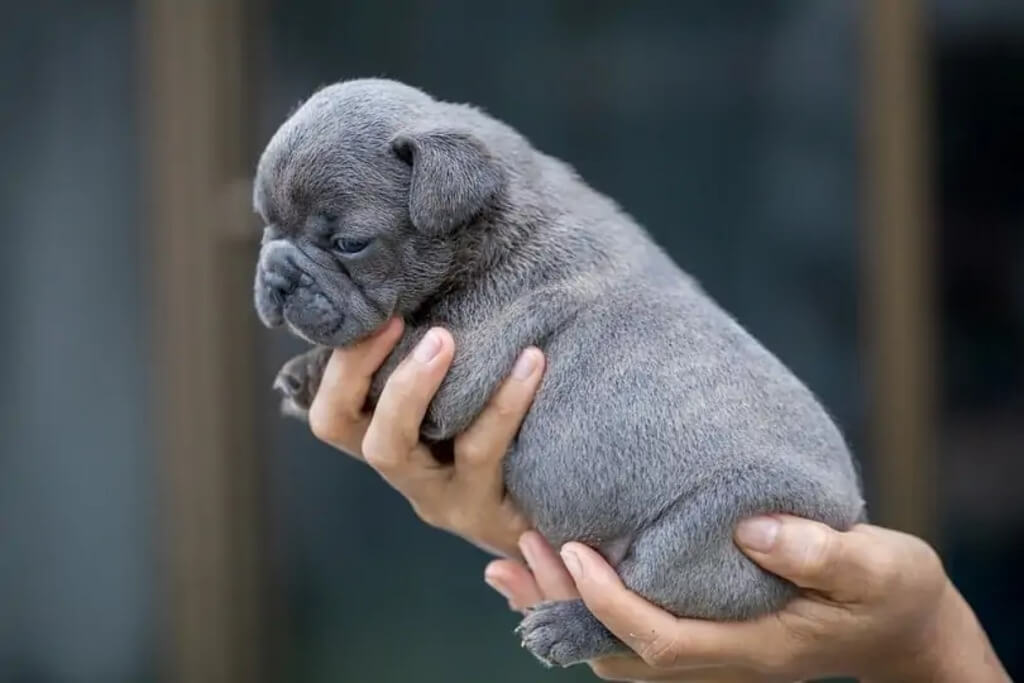 Even though these canines are friendly and supportive, sometimes they behave stubbornly. They will learn new things with only positive reinforcement methods. You should give them rewards, treats, and lots of praise.

Instead of long sessions, focus on teaching them one thing at a time. The shorter session every day will help them understand, and this will stay in their minds forever.

Like the other dog breeds, the French bulldog also suffers from several health conditions. That’s why it’s important for you to keep a close eye on your pup’s health and should visit if you feel anything is serious.

Here are some medical issues that blue French bulldog is prone to: 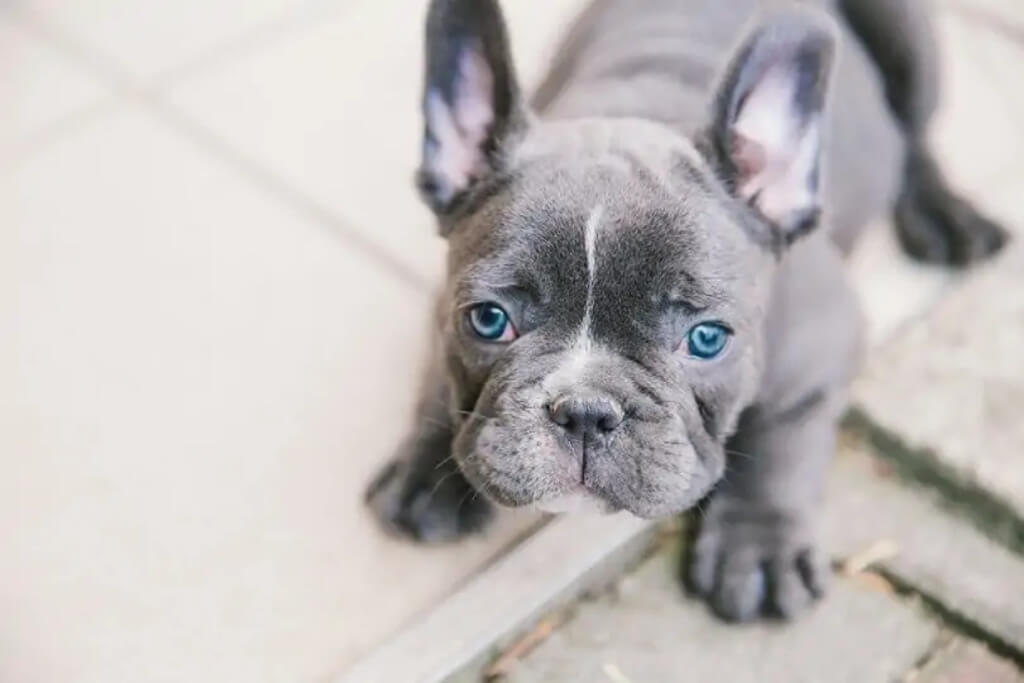 So, why are blue French bulldogs expensive?

The main reason behind their high prices is that this breed, particularly blue french bulldogs, are rare to breed. Besides this, these canines have many health issues, so it is challenging to produce healthy blue French bulldog puppies. 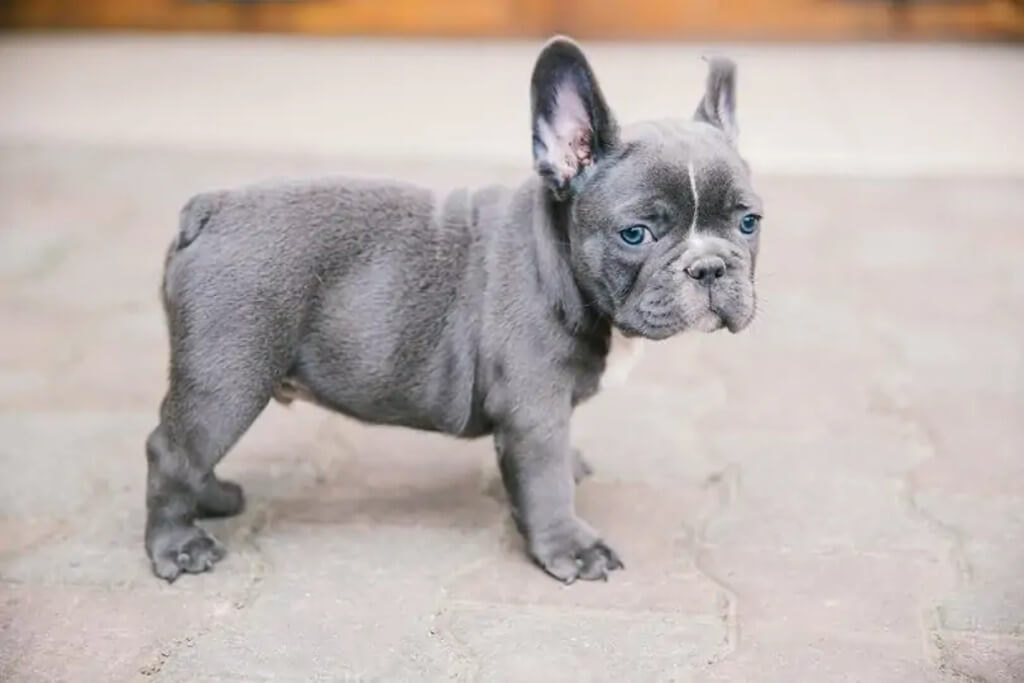 Are you still confused about the decision about getting a blue merle french bulldog or not?

Here are the advantages and disadvantages of owning a  blue Frenchie:

Fun Facts About The Blue Frenchie 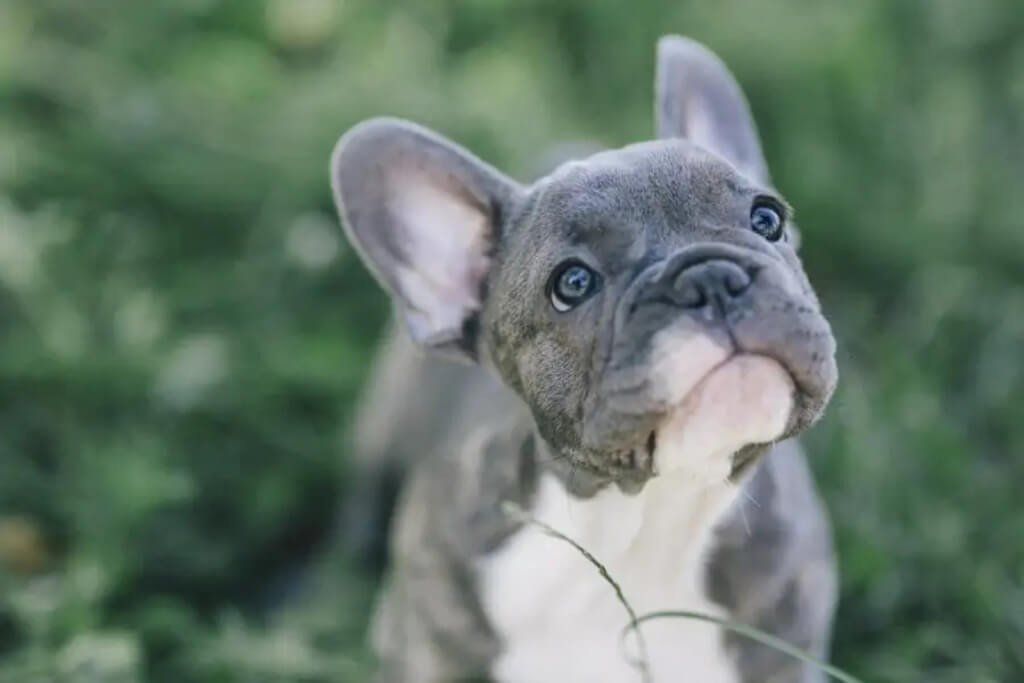 Here are some of the most interesting and fascinating facts about blue merle french bulldogs:

Also Read: Pitbull Dog and Puppies Facts You Should Be Aware Of

No, Blue Frenchies are not one of the official colors recognized by the AKC.

The American Kennel Club (AKC) did not recognize this color of the French bulldog breed. However, there are other colors that come under the list of official colors recognized by AKC, such as

The answer is YES! However, this depends because some Blue Frenchies are not purebred.

3. How Much Does a Blue French Bulldog Cost?

Blue Frenchies puppies can cost anywhere between $2500-$8000. The price will increase or decrease according to the location, color, and breeder.

4. What Are the Different Types of Blue Frenchies?

5. Why Are Blue Frenchies So Expensive?

This breed is rare and difficult to breed because of its shape and color. These pups have short and small body sizes, so natural mating is impossible. The female blue french bulldogs have to undergo artificial insemination and c-section procedure. The entire process is expensive, and breeders only get 1-2 puppies.

Yes, blue Frenchies are extremely friendly and loyal dogs that will get along well with kids and other pets. Their blue coat makes this breed rare and alluring. If you’re looking for a companion that can live peacefully in a small apartment, you can get a blue merle french bulldog puppy.

So this is all about the blue french bulldog. You can get other French bulldogs apart from blue or get different colors of blue variants. I hope this in-depth guide on the blue french bulldog has given you all the required information about this dog breed. If you find this blog informative, please share it with your family and friends looking for a small breed to adopt or buy.