Everyone knows about Pitbulls as they come under the list as one of the most powerful dog breeds in the world!These canines are extremely loyal, friendly, and playful dogs who like to spend time with their family. They have powerful and fierce looks, which many pet lovers find fascinating!

If you love Pitbulls and want to bring one puppy at home, a brindle pitbull is a great choice!

This dog breed comes in a wide range of colors and patterns. So if you want a one-of-a-kind that doesn’t have a standard cost, a brindle pitbull puppy is perfect for you and your family! Brindle is a wonderful coat color and pattern.

Are you also planning to get a brindle pitbull but don’t know much about this breed? No worries, you’re at the right place!

Today in this post, we’ll tell you everything about the brindle pitbull and answer the most common questions regarding this breed, such as:

Apart from this, you’ll also learn about many other things about the Brindle Pitbull:

Let’s start with what is a brindle pitbull.

What Is a Brindle Pitbull? 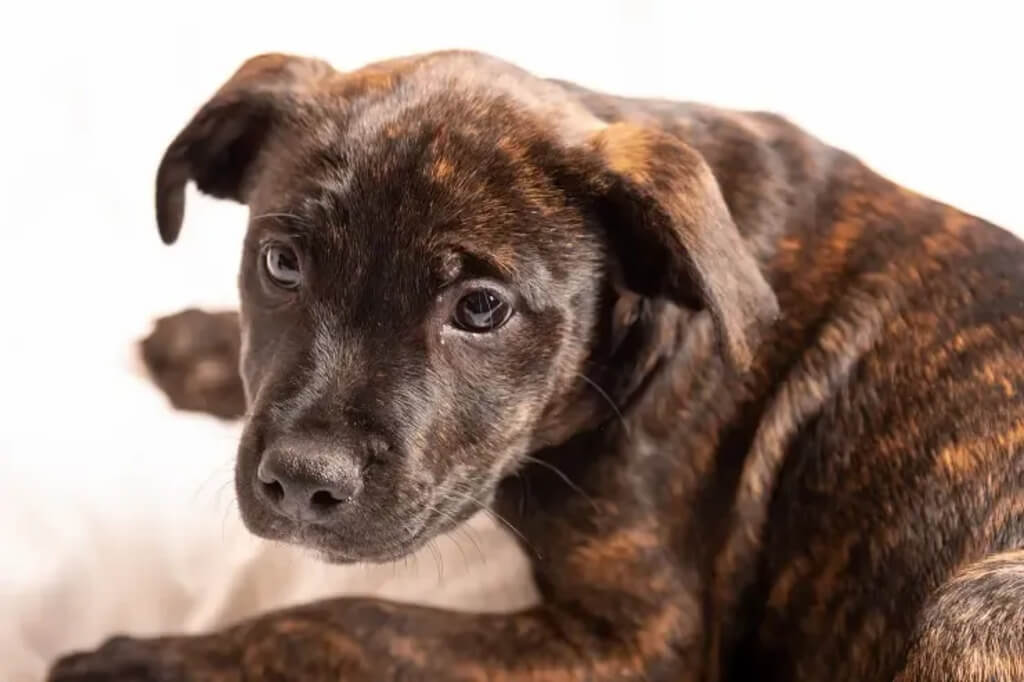 Brindle pitbull refers to the pitbull dog breed with a Brindle coat color variation. These canines are popularly known for their tiger-like stripes. They have a unique fawn, tawny brown, or dark brown base coat color on which these strips look wonderful and make them stand out among all the other canines.

Many people get confused about this breed and assume that they are a specific type of pitbull, such as a Red or Blue Nose pitbull. However, that’s not true. ‘Brindle’ refers to one of the coat colors of the Pitbull. And as we already mentioned before, the ‘Pitbull’ refers to either an American Pitbull Terrier or an American Staffordshire Terrier.

What Is a Reverse Brindle Pitbull? 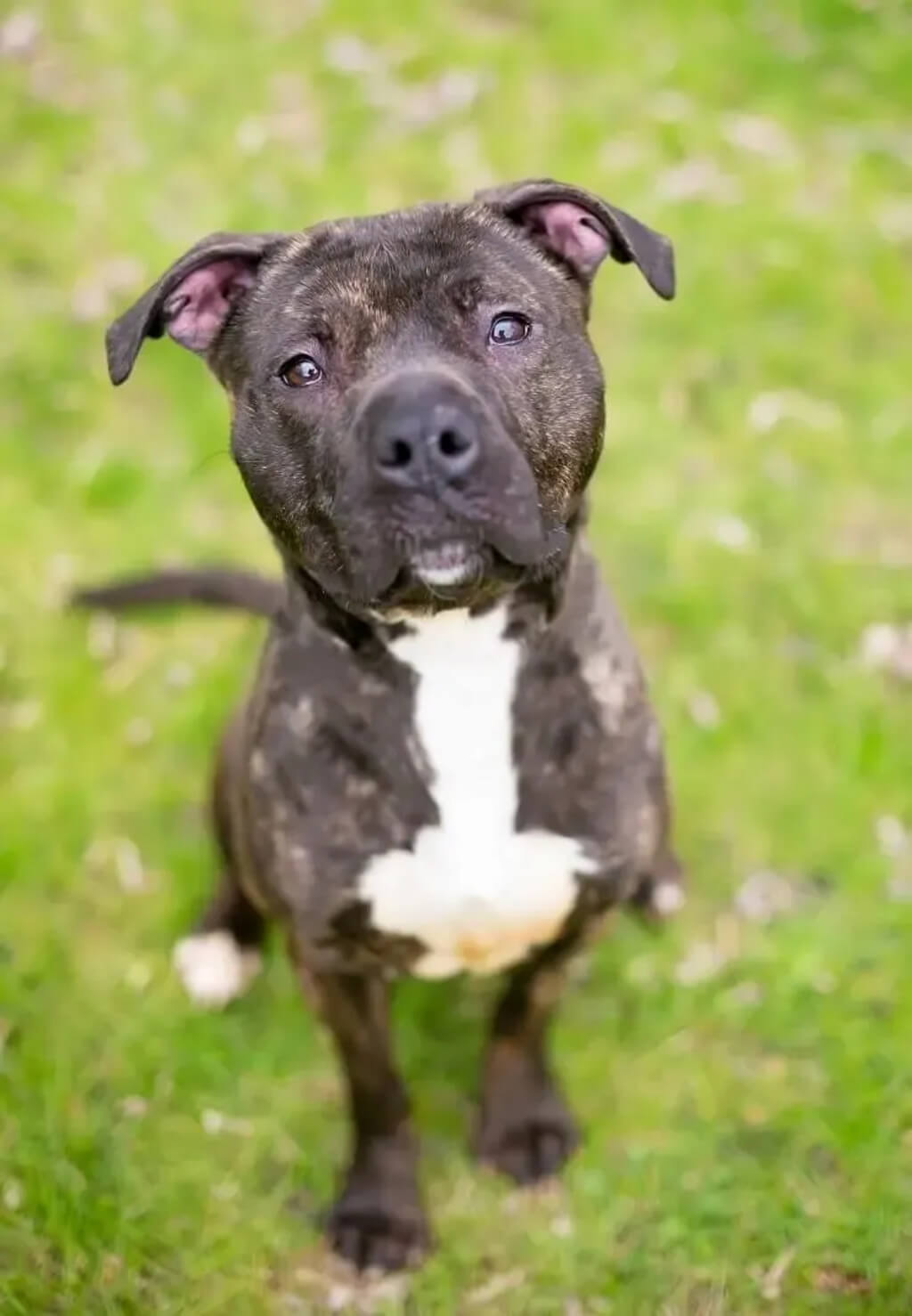 Don’t get confused with the name; the Reverse Brindle Pitbull is another famous Brindle variation. As compared to other breeds, these canines have light-colored stripes on a darker base color rather than dark stripes on a light background. That’s why these dogs are known as Reverse, which in fact, refers to the strip pattern of the marking on the Brindle Pitbull.

Sometimes, Reverse Brindle Pitbull is also known as a black Pitbull with tan or fawn markings. Some of these canines have a completely black coat with few fawn or tan markings.

This breed holds a long history from the 1800s. Back then, these canines appeared as the breed between an Old English Bulldog and a Terrier – This results in a breed that is loyal and fierce.

Here is the summary table of the tiger stripe brindle pitbull:

No, actually, Brindle Pitbulls are not rare! This is a misconception among people that Brindle is one of the rarest coat colors!

This confusion might arise from the fact that a recessive gene causes this coat color, so it occurs less as compared to other coal colors. Apart from this, the American Kennel Club (AKC) also didn’t recognize this breed as a single breed. This is another reason why people prefer to avoid owning this breed. But on a positive note, the United Kennel Club (UKC) recognizes American Pit Bull Terriers, including Pitbulls with Brindle coats. 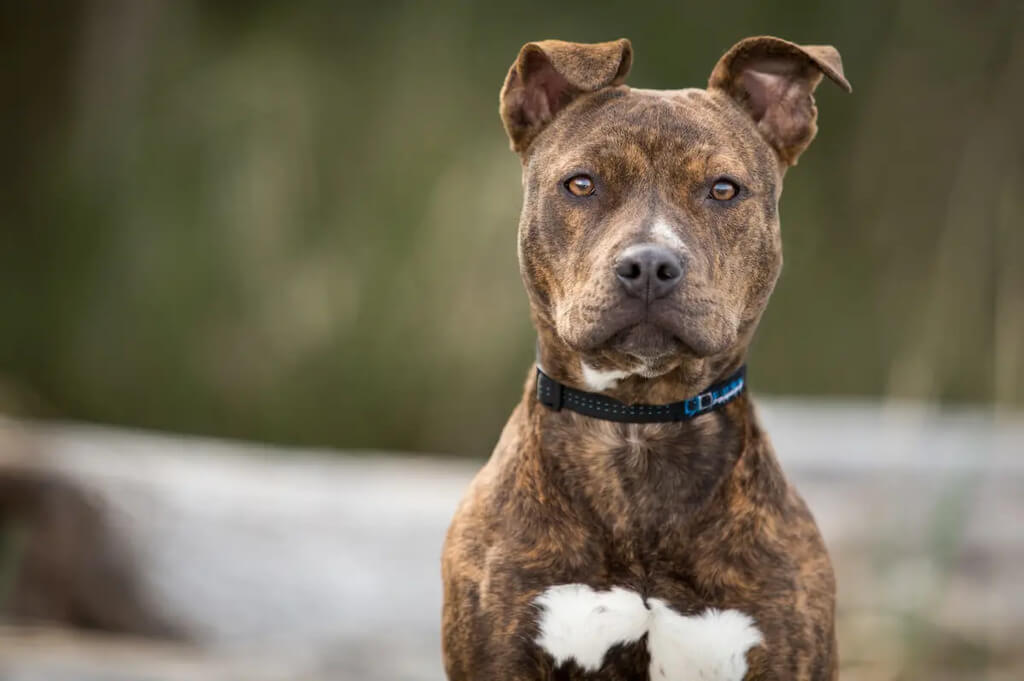 Even after knowing a bit about this breed, you might wonder what a Brindle Pitbull looks like.

The parents of this breed are American Pit Bull Terrier and American Staffordshire Terrier, so it’s pretty obvious that it has similar characteristics. These canines have muscular and strong body physiques. They also have broad faces and short muzzles.

Blue brindle pitbull have a magical small pair of eyes that make anyone fall in love with them. They also have rose-shaped ears with cartilage that curls in. Their short and sparse coat is stiff and easy to maintain. All these things make these dogs really cute and adorable.

These canines have a fawn or brown base with light stripes or streaks on the entire body. This is why they also resemble the tiger-like stripes of a tabby cat. 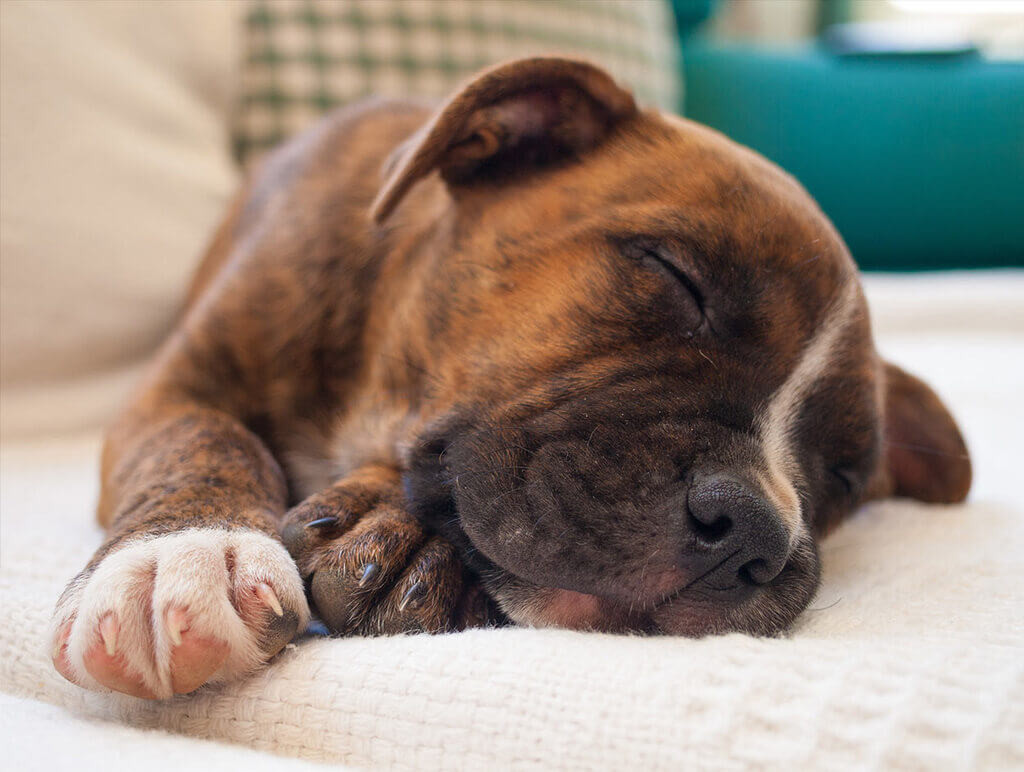 Let’s know more about each of them and know what the major differences between the two are. 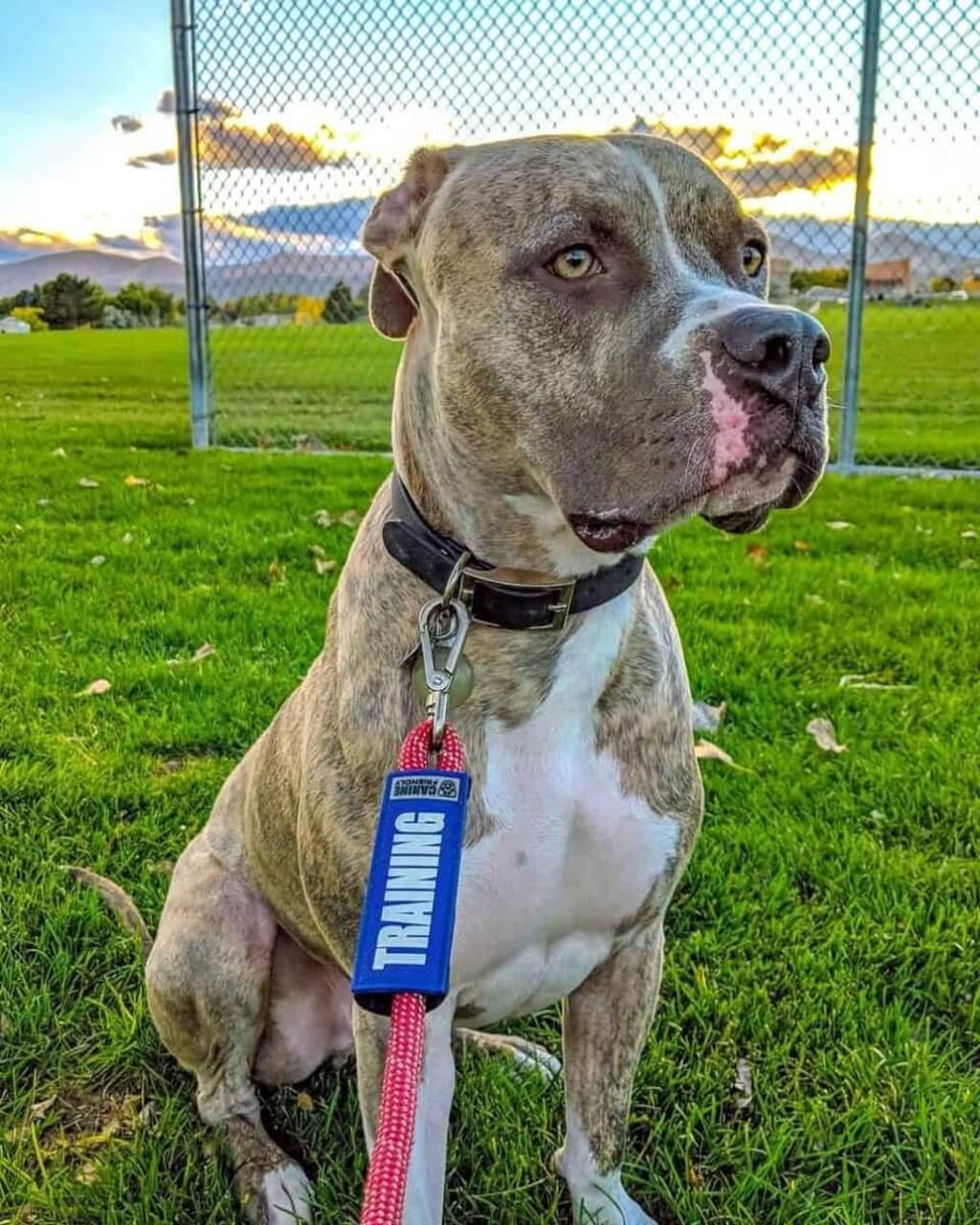 This Brindle Pitbull has a blue and gray coat color along with light brown strips or markings. These canines have bluish-gray eyes and noses. Apart from this, some dogs also have white patches on some parts of their body, such as the face, chest, and feet. 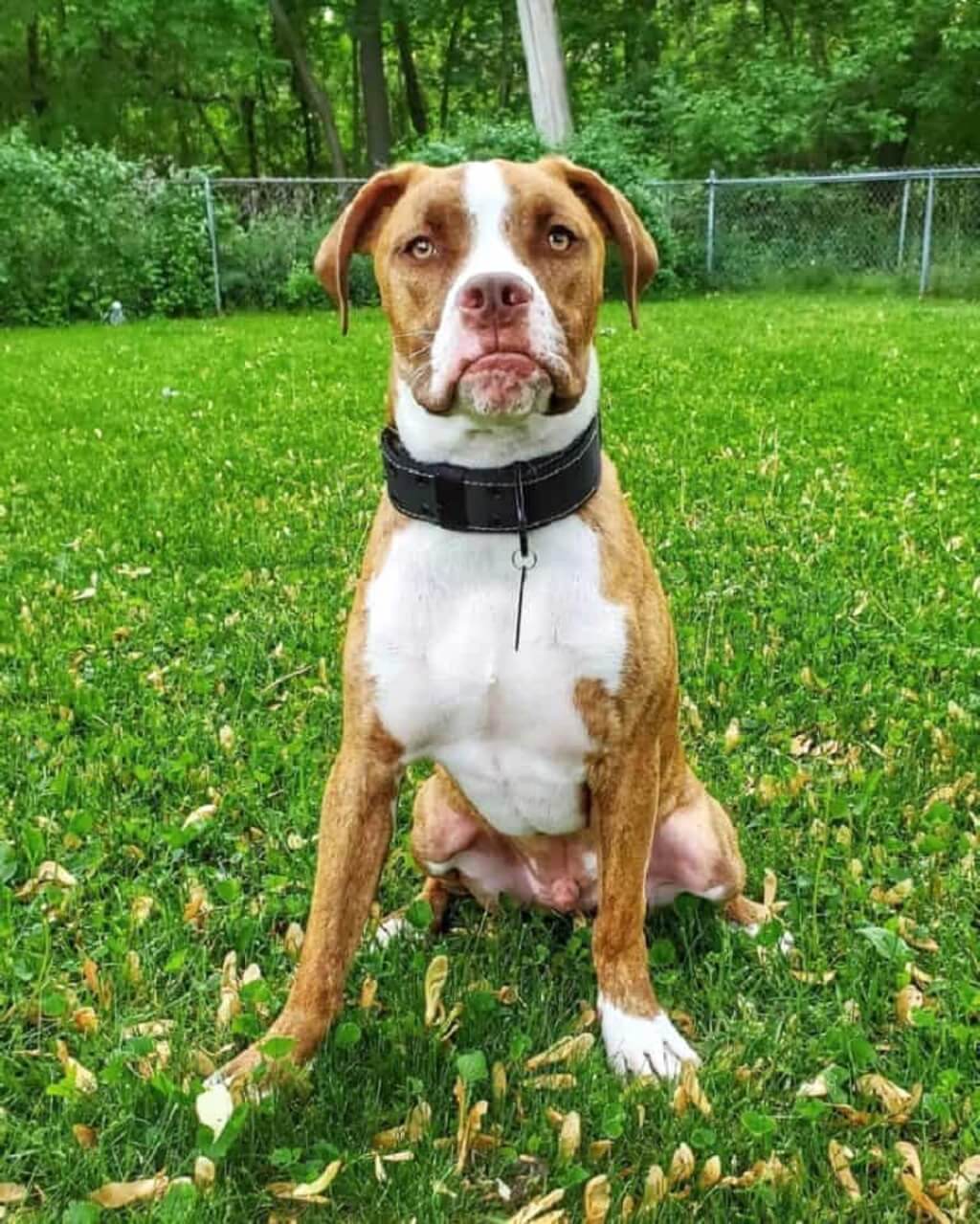 These canines have soft short red coats with beautiful fawn coloring and brindle markings. They usually have reddish-copper noses and red eyes, which is pretty common in red-nose brindle Pitbulls. Like the blue nose Brindle pitbull, these ones also have white coloration on their face, chest, and feet. Let’s see red nose pitbull information.

It is always good to see our puppies grow from babies to adults. But it is also important to keep in track of the height and weight to know their overall body growth.

Here is the size and weight table:

So how big will a Brindle Pitbull get when fully grown?

Here is the complete growth table of Brindle Pitbull puppies: 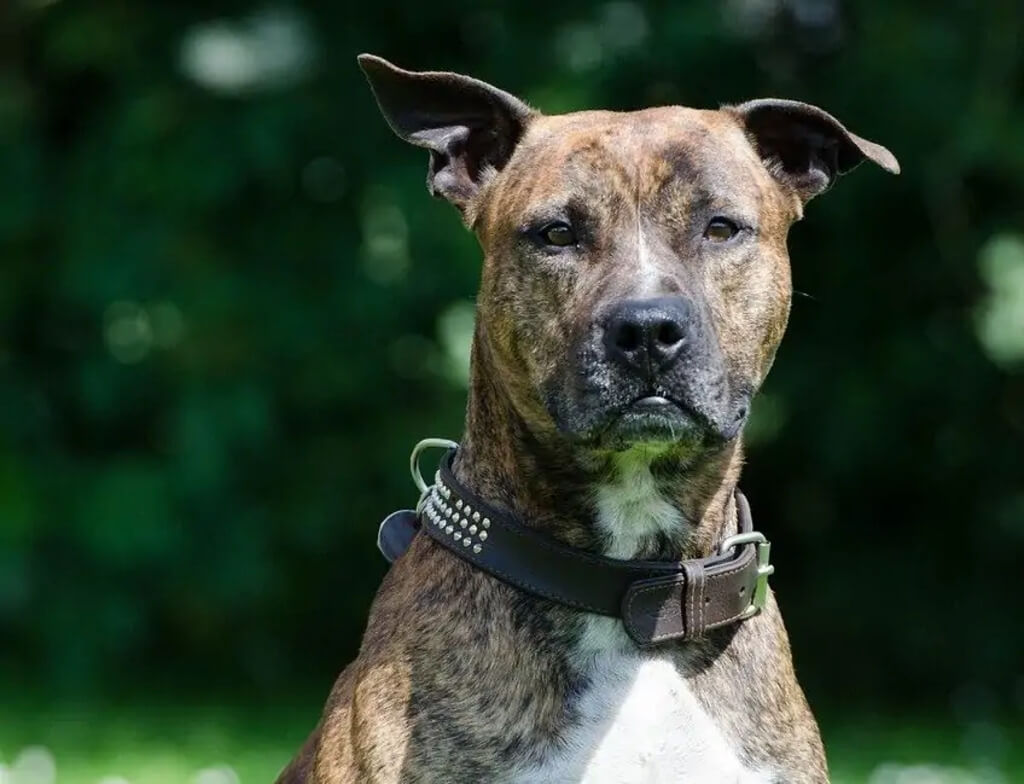 So as we know, Pitbulls are available in many color variations, such as black, fawn, red, blue, and many more. However, there are also many color options available in, specifically in Brindle Pitbull, including: 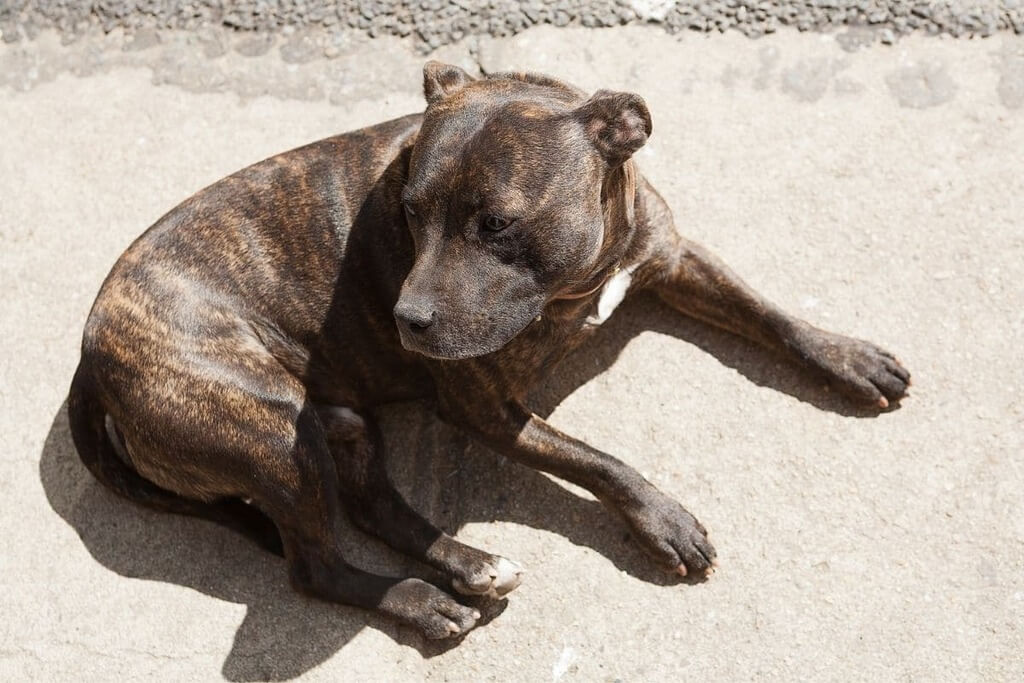 Back in the day, Pitbulls were used in many violent activities, such as dog fighting, bull-baiting, and bear-baiting. Due to this extreme history and many controversies about their lineage, still many people are sceptical about getting a pitbull.

However, this assumption is disproved by many dog lovers who know that brindle Pitbulls make excellent family dogs.

If you still have doubts, get a brindle pitbull puppy, and you’ll all doubts will get clear! This is because when you train and handle a pitbull puppy correctly, they behave well and become great family pets.

These dogs may look fierce and muscular from their appearance, but they’re actually pretty sensitive and have nurturing personalities. These canines love to spend time with their owners and like to play with kids and other animals. They love to be around people, and that’s why sometimes they also develop separation anxiety when left alone for long periods.

Also, sometimes, it’s a bit challenging to socialize them with other animals as they can easily get jealous of them. So it’s necessary to train them early and give them your attention. 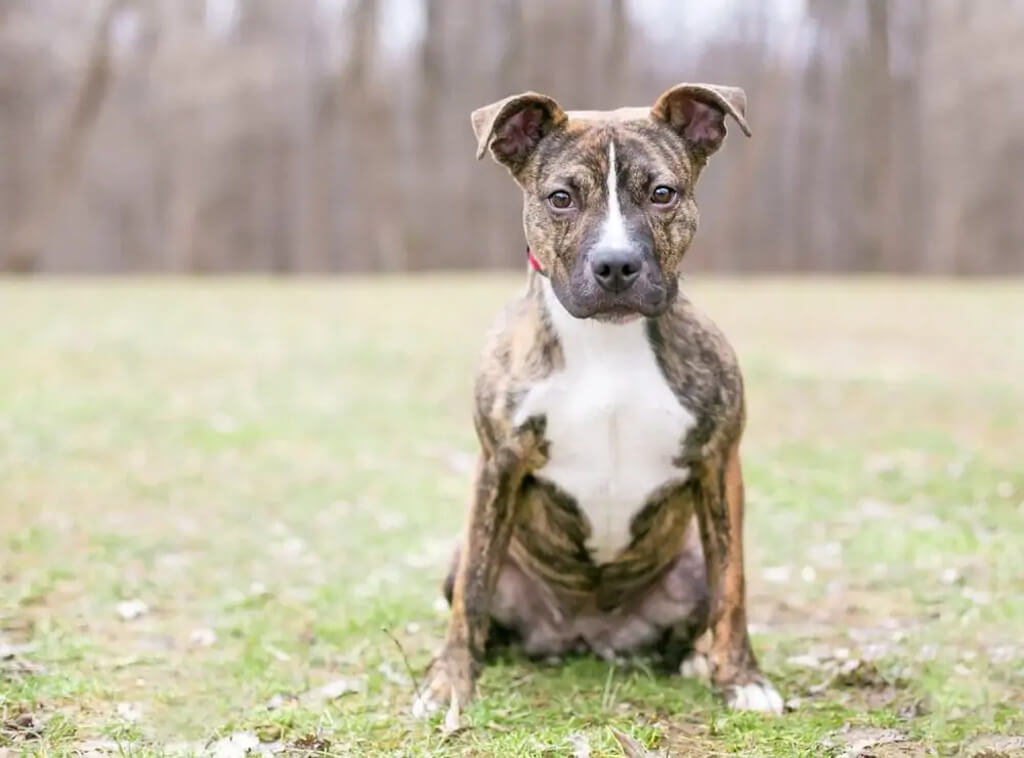 If you want to handle your pitbull correctly, you have to remember three important things:

You should include these three things in the training so that your pet will learn everything. That’s important because even though these canines are friendly and smart, they become stubborn. Sometimes they become aggressive and can harm others if they feel they’re not treated well.

With gentle and kind training sessions, you can teach so many things to your brindle pitbull from the early stages. Also, remember to make these sessions a bit fun and interesting by including puzzle-type treat toys, fun games, and giving them treats. 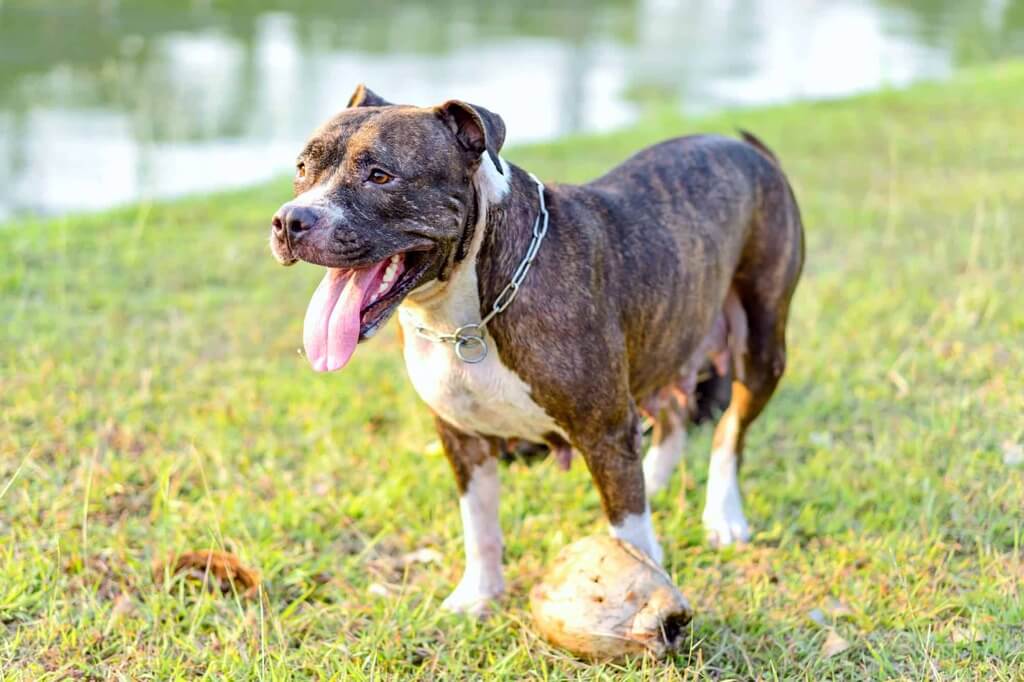 As a pet owner, or even if you’re not but planning to buy a pitbull in the future, it’s pretty obvious to think about how much these dogs live.

So, on average, the lifespan of Brindle Pitbulls is 12 to 16 years.

Unfortunately, these canines suffer from numerous diseases. Some medical issues are treatable, while others are not!

Here are some of the Brindle Pitbull health problems that you should watch out for: 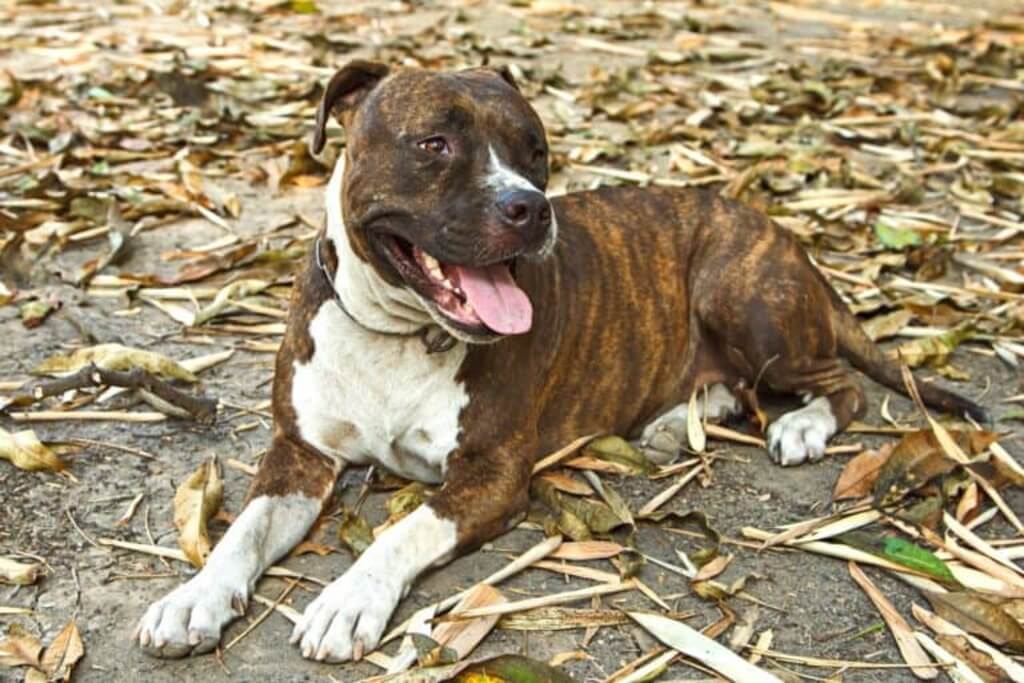 So, how much does a Brindle puppy cost?

However, if you’re looking to adopt a puppy, you only have to spend $250. The cost may be less, but the whole adoption process takes some time.

The overall purchasing price of the puppies usually depends on several factors, including the breeder. Yes, if you get the dog from a reputable breeder, which you should always do, then the prices are actually high compared to other local breeders.

Don’t think you only have to invest $800 to $100 for the puppy. That’s because there are also many other expenses apart from the initial purchasing cost, such as the cost of food, toys, grooming, training, and vet bills.

Here is the table of other costs that you have to keep in mind while adopting a Brindle pitbull puppy:

Places to Find Brindle Pitbull Puppies for Sale and Adoption 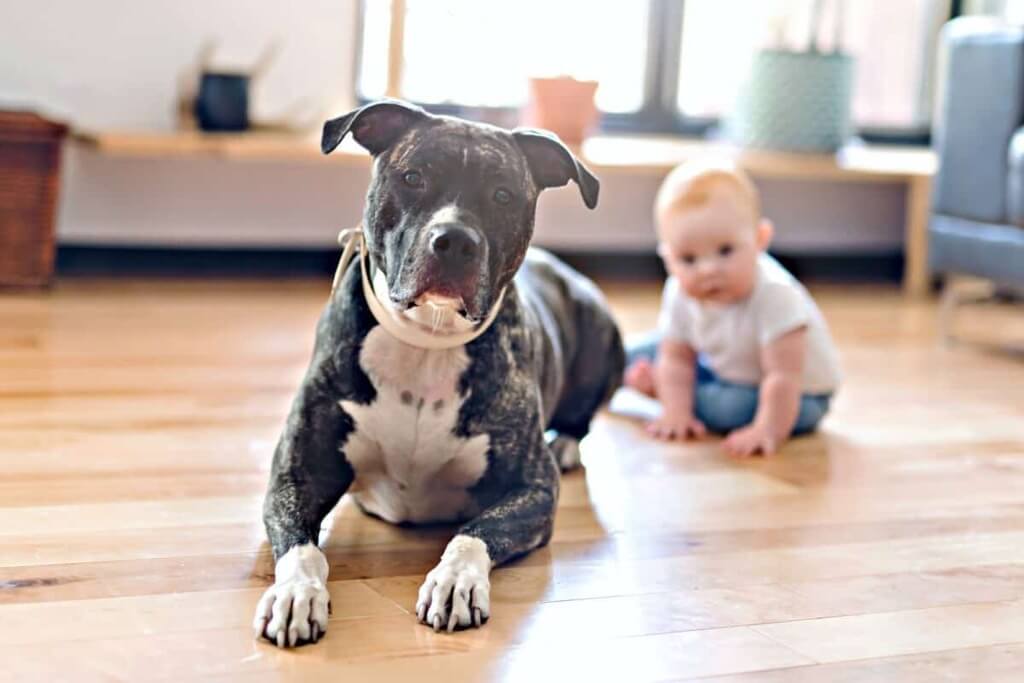 Now you know everything about Brindle Pitbulls and have surely decided to get a puppy.

So, where to get a Brindle Pitbull puppy?

You can buy a puppy in many ways, both offline stores and online websites. However, the whole buying or adopting process is a rigorous task. From preparing yourself finally and mentally, you have to do a lot of things to make the process easy for yourself and the puppy.

Here is a list of reputable breeders where you can easily find Brindle pitbull puppies:

You can also contact the local breeders in your area or online to contact and reach them more easily.

If you want to adopt a Brindle Pitbull, here are some of the pitbull rescues to call:

1. What Are the Popular Pitbull Colors?

Pitbull is one of the most popular dog breeds in the world. This breed is available in over 20 various colors and patterns. Some of the famous colors are black, red, and Brindle. The rarest Pitbull color is Merle.

2. Do Brindle Pitbulls Shed a Lot?

Brindle Pitbull has short and stiff coats that shed only twice a year. They don’t need brushing on a daily basis. So their overall maintenance cost is low. However, these dogs sweat more as compared to other breeds, so bathing is required once in a while.

3. What Bloodline Is a Brindle Pitbull?

4. Are Brindle Pitbulls More Aggressive Than Other Breeds?

Brindle Pitbulls were used in fighting dogs, protection, sports, and many violent activities, which gave them a bad reputation. This is the main reason why these canines are considered aggressive dogs. However, this is only partially true!

The Brindle Pitbull has scored over 80% on the American Temperament Test, which proves they have less aggression as compared to many other breeds like Golden Retriever.

Brindle Pitbulls are friendly, loyal, and intelligent dog breeds. They are super active and like to spend and play with their owners. However, they need supervision around small animals and young children.

This thing can be handled perfectly with the right training. You can train them through positive reinforcement to follow your commands and instructions.

So this is all about the Brindle Pitbulls. These canines are just like other dog breeds, which are friendly, playful, and loving. They’re extremely loyal and protective of their owners. Don’t change or confuse your decision about getting a Brindle Pitbull puppy because of some false reputation rumors.

When trained correctly, these blue brindle pitbulls have proved to be one of the best family pets in the world. They are great watchdogs, guard dogs, and excellent therapy dogs. Apart from this, this dog breed also worked with search and rescue or the police force.

I hope this in-depth guide on the Brindle Pitbull dog has given you the necessary information. Please share this blog with your family and friends if you find it informative.