759 views
Table Of Contents hide
1 Types of Pitbulls: A Complete Guide
1.1 1. American Staffordshire Terrier
1.2 2. American Pitbull Terrier
1.3 3. American Bully
1.4 4. American Bulldog
1.5 5. Staffordshire Bull Terrier
1.6 6. Blue Nose Pitbull
1.7 7. Spike
1.8 8. Bull Terrier
1.9 9. Colby
1.10 10. Monster Blue
1.11 11. Stuffawler
2 Final Thoughts
We all have l heard about American Pitbull Terriers. Pitbull are very familiar and popular as working dogs. Pitbull is popularly known for its fighting skills and confident personality. Though they are often misunderstood as lazy dog breeds, in reality, they are very courageous, spontaneous, and very caring. Did you know how many types of Pitbulls there are? People think there are only three types of Pitbulls. But You will be surprised to know that there are thirteen different Pitbull types, isn’t it interesting? This is why they say we should never conclude any discussion before learning the details and facts.

Are you planning to adopt a Pitbull for your family? Confused about if they are worth a companion or not? Hopefully, this blog will provide the answers to all your questions. I am pretty sure you are excited to learn more about these exciting Pitbull types.

Types of Pitbulls: A Complete Guide

Are you excited to learn more about different types of Pitbull? Let us not waste any time further and start exploring? 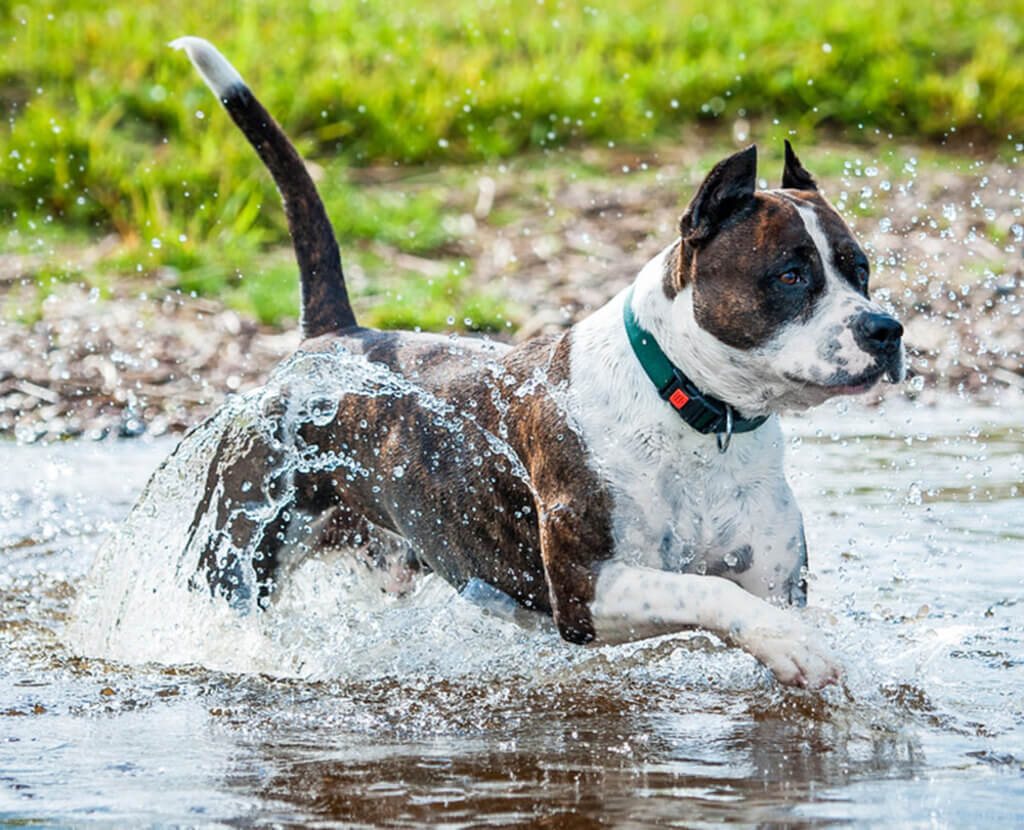 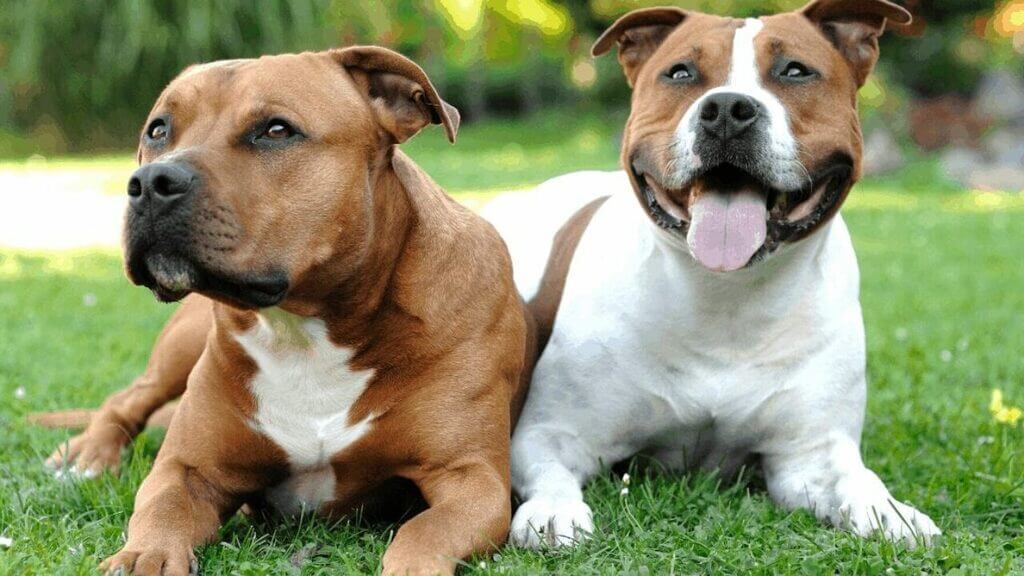 American Staffordshire is the original breed of the Pitbull terriers. Staffordshire is known from the late 19th century. However, it is a fact that Staffordshire was not encouraged as much as fighting dogs. But nothing changes if they are not like other Pitbull types, they are still fierce working dogs. After all, they belong to the same family breed and group. 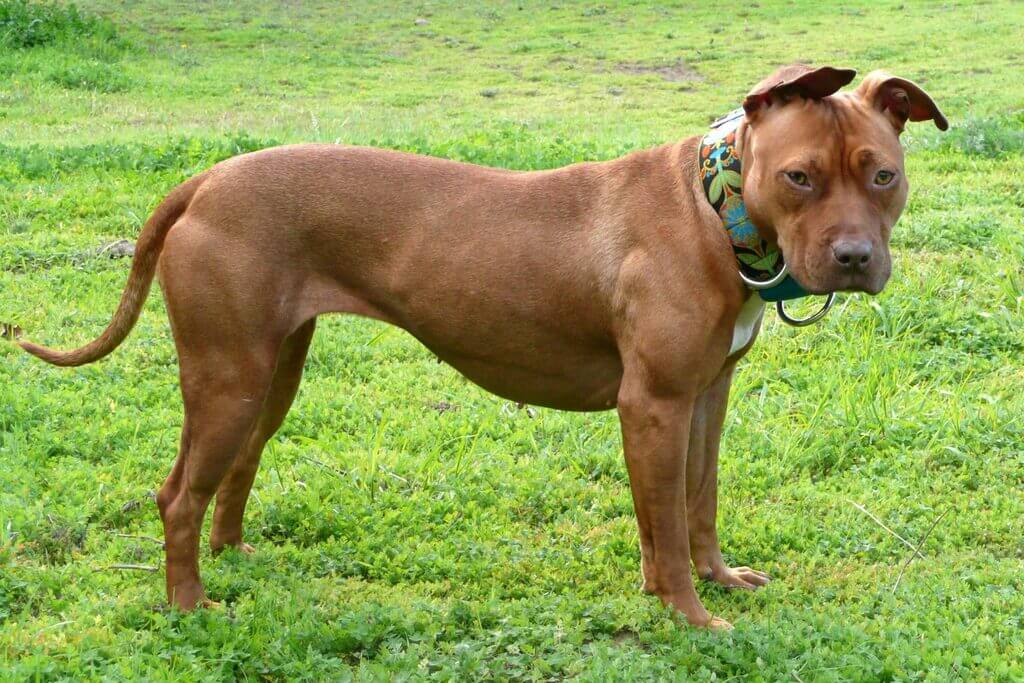 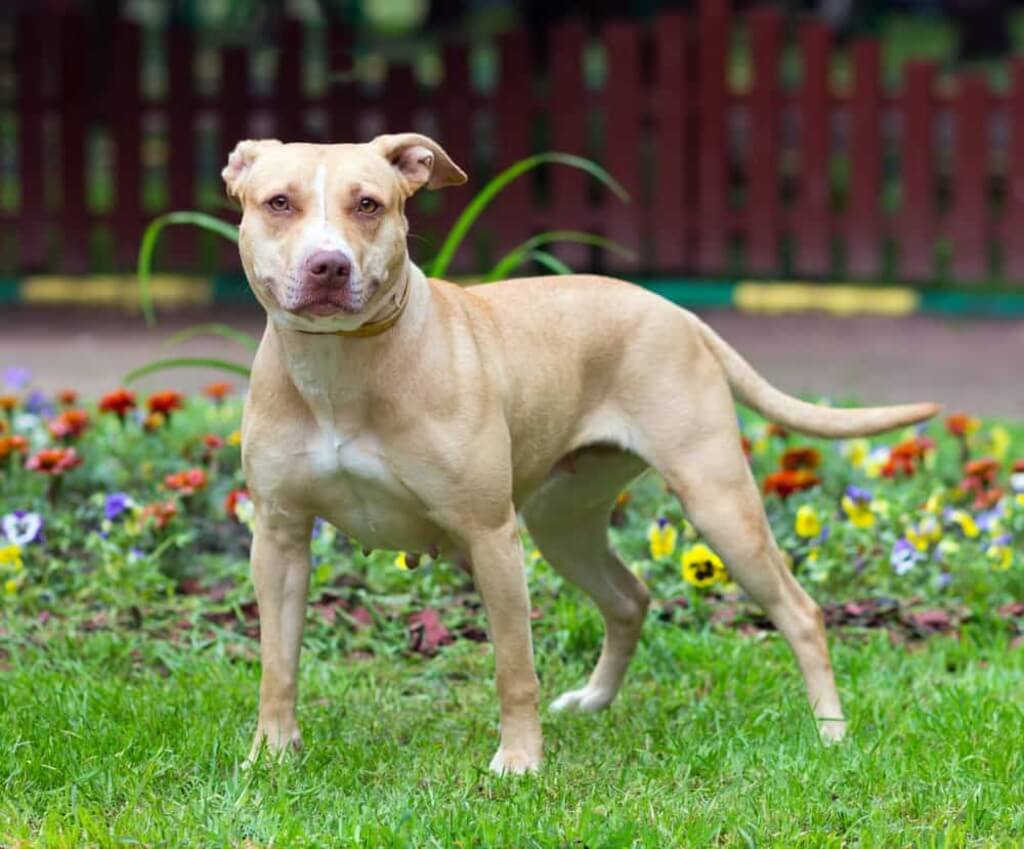 Apart from being herding, working, fighting, and hunting dog breed, they are very family-friendly and obedient towards their owner. Yes, it is a fact that they do not socialize easily with other dog breeds. Still, good training can help them mingle with everyone. They have soft and smooth skin. They usually weigh 65 to 85 pounds. 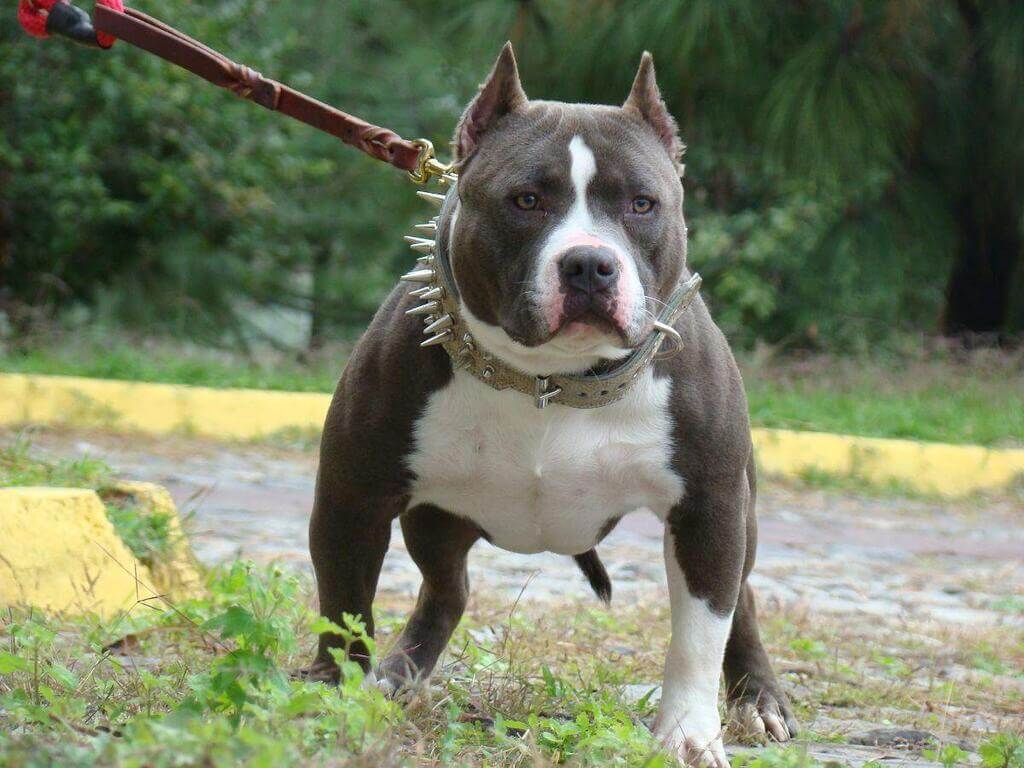 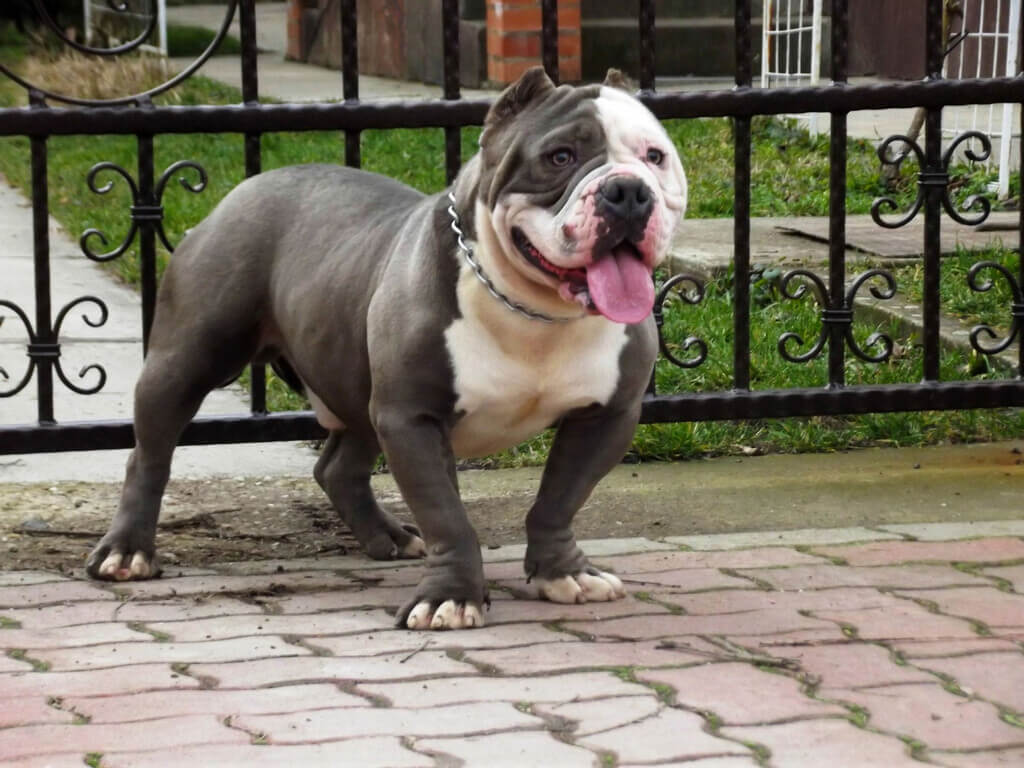 Now, this is what is strictly call a bull or fighting dog. Only a few people know that American bullies were new as a breed back in the early ’90s. The sad fact about them is that they were not recognized by their family group of the American Kennel Club for years. In 2013, they were happily recognized by the United Kennel Club. If you ever notice, the American Bully is much broader in all ways in comparison to the American Pitbull Terrier and all the other types of Pitbull.

They have strong, smooth, and short coats. American Bullies weigh up to around 65 to 90 pounds. If you ask, can we have them as our pets? The answer is, they are assertive, fun-loving, and most importantly, they are perfect as guardians. American Bully has a powerful instinct and a spontaneous personality. They are ideal as a family dog and can quickly gel up with your family. 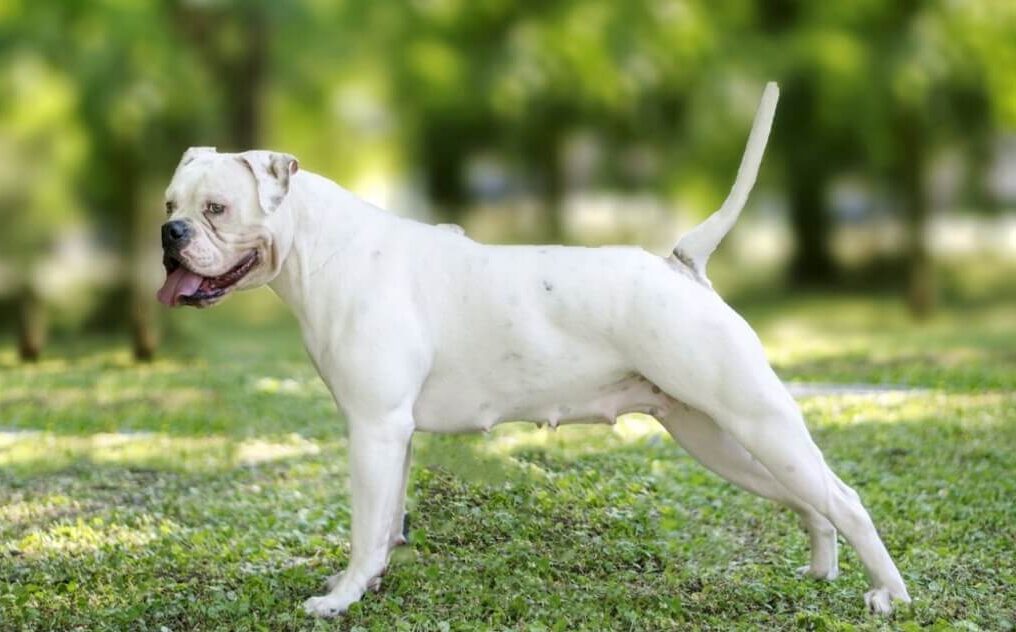 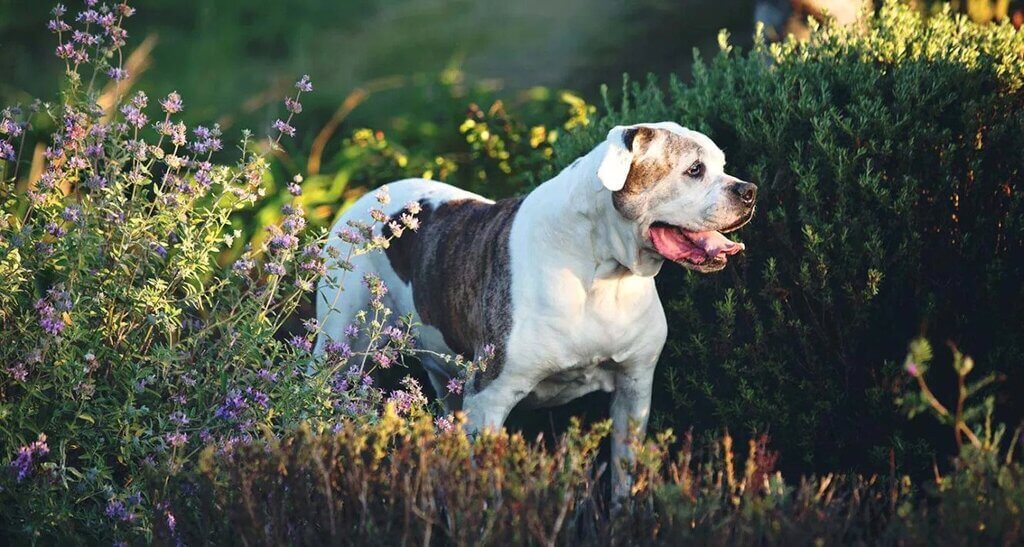 We know people get confused between Pitbull types, especially when it is between the American Bulldog and American Bully. Both the Pitbull types belong to different groups. The American Bulldog belongs to the groups of English bulldogs. American bulldogs are very famous and popular as bull-baiting sports animals. They have an enormous level of energy. This is the only reason why they are so active and occupied the entire day.

Suppose you are wondering why to adopt an American Bulldog? Their sincerity, affection, and respect towards the family and their loved ones are some of the primary reasons. Have you ever heard that they are very intelligent and alert? One reason why they are likely to adopt as policing dog breeds. They usually weigh between 60 to 130 pounds which is an ideal weight for dogs and that is what helps them stay active and healthy. 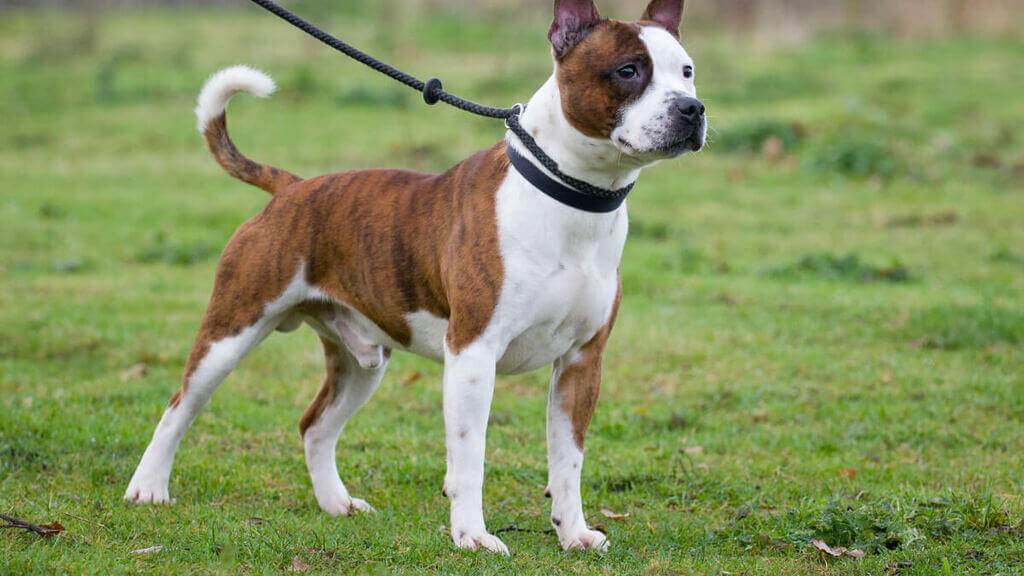 In today’s era, Staffordshire is not just a bull terrier, instead, they are loving and acceptable as pet dogs. They keep following their masters wherever they go. If you are interested in adopting a Staffordshire Pitbull breed, they are the best as a companion. They weigh between 24 to 40 pounds and thus can be maintained and adopted by first-time owners. 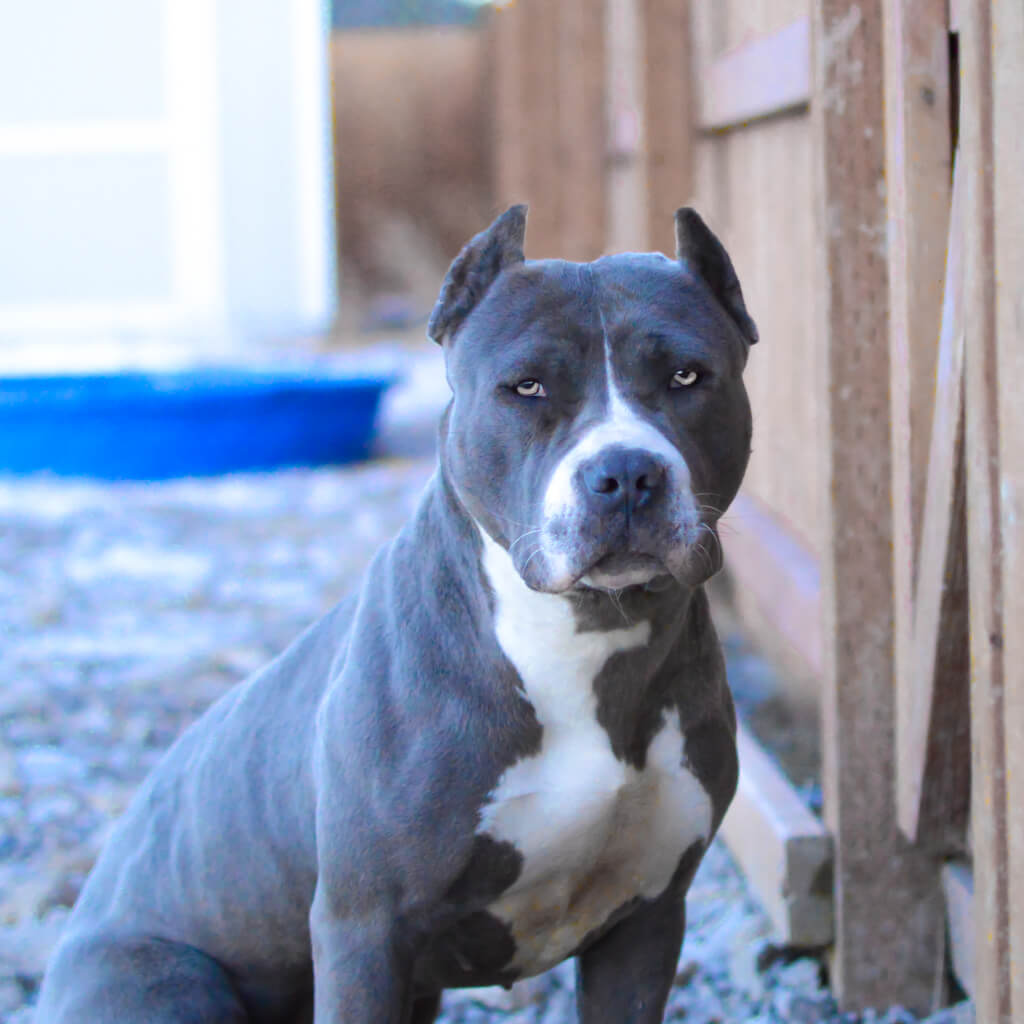 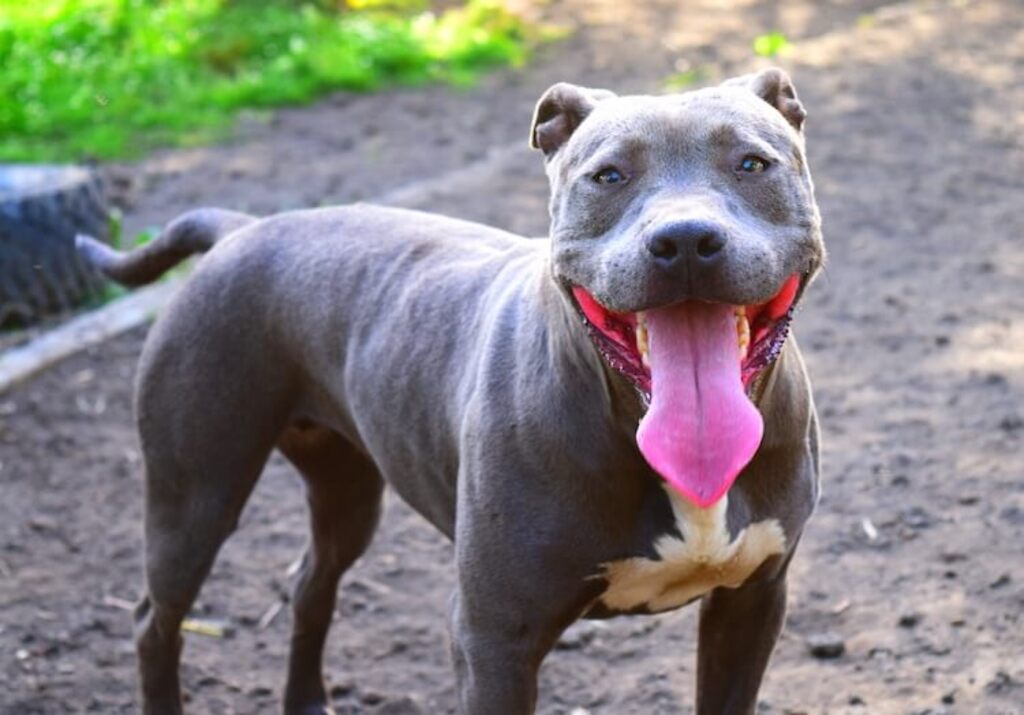 Only a few people know that Blue Nose Pitbull is very possessive and caring about its owners and family. Bluenose loves to spend time with small children and keep guarding them. They require proper training so that they can socialize adequately. 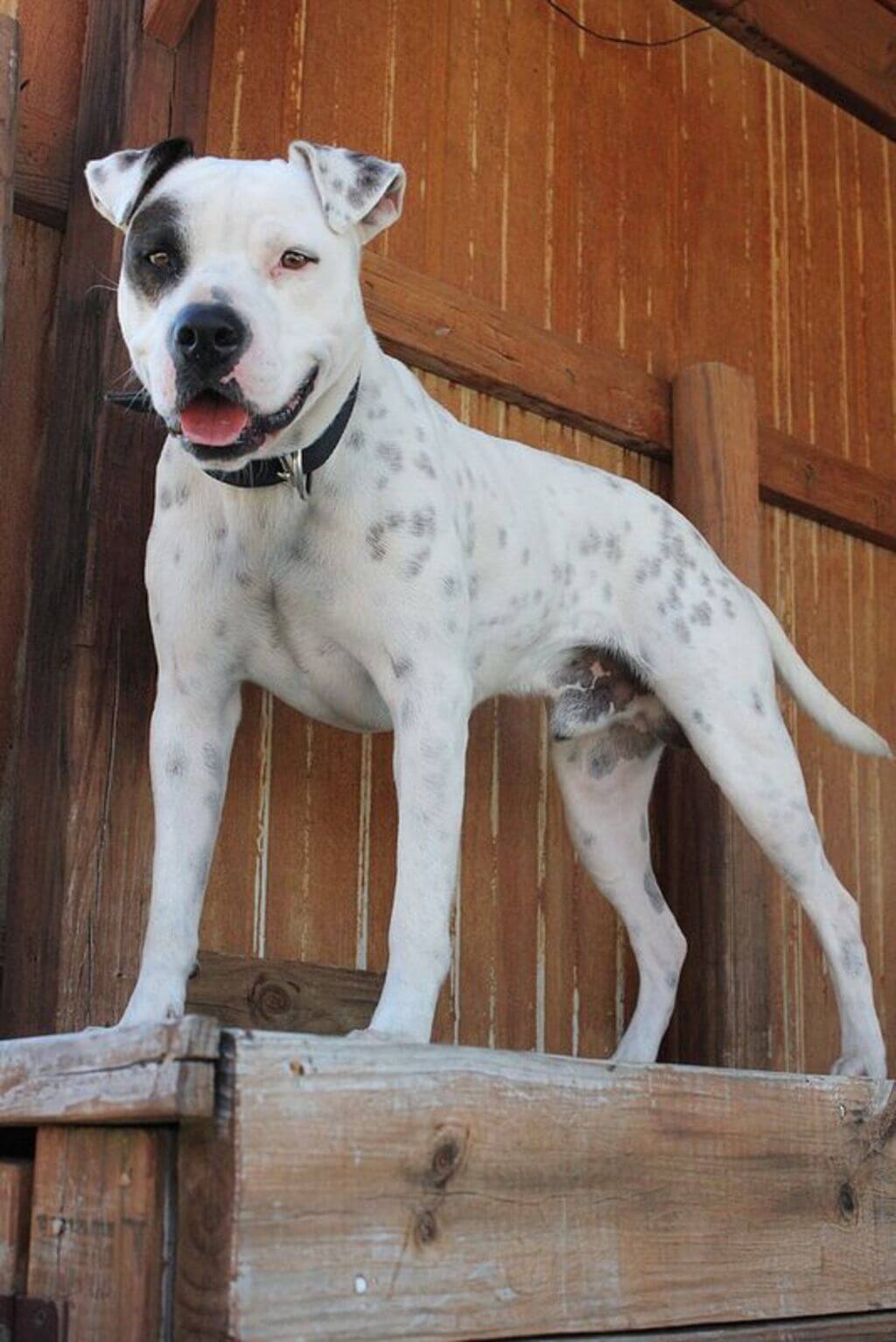 I know many of you must be wondering how Spike is a Pitbull type? But yes, it belongs to the group Pitbull. Spike is the offspring of a Pitbull and Dalmatian; thus, they are considered as one of the types of Pitbull. Spike is popularly known as ‘Pitmation,’ name after their parent breeds. If you notice, they have spots on their body that depict the breed Dalmatian and their facial features are like a Pitbull.

Spike is very good as a policing dog breed and a family dog. They are very loving, caring, and obedient to their owners. They are very quiet and playful, but you need to train them well to make them socialized. Spikes love children and enjoy spending time with them. 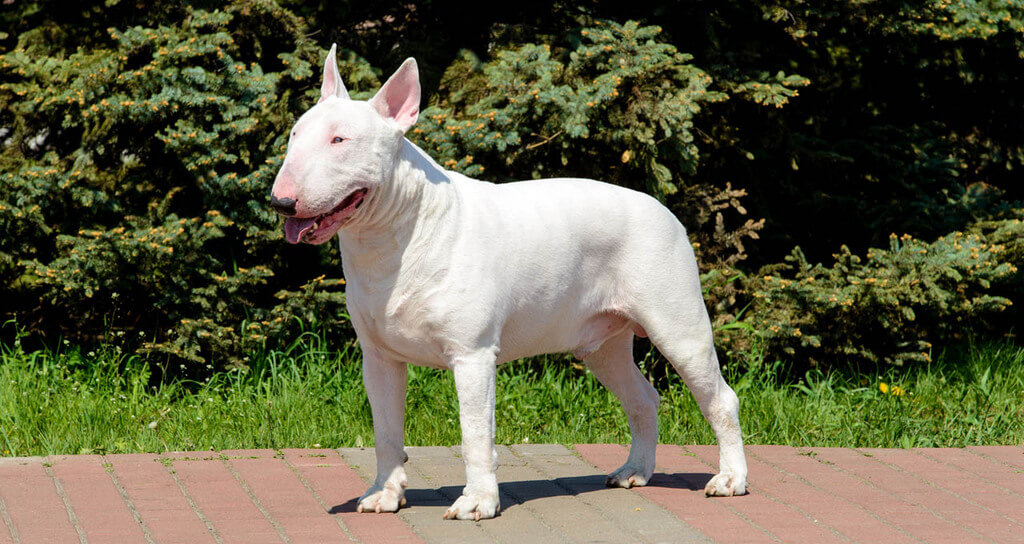 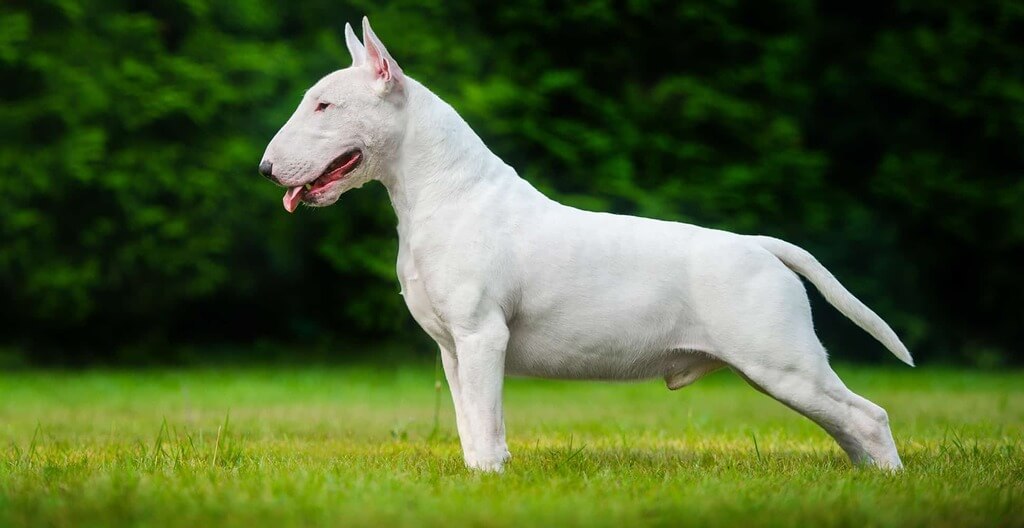 Starting with an exciting fact, a Bull terrier can grow up to 22 inches in height. They weigh between 40 to 80 pounds. Unlike all other types of Pitbull, Bull Terriers are very aggressive and arrogant at times. Not all types of owners can deal with them. Only K9 and Police teams can train them. They have strong instincts, alertness, and understanding skills. Not all types of Pitbull are good as family dogs, just like Bull Terriers.

They need strict and extensive training right from a very young age. The only reason behind it is, they are very challenging to be train and obedient. Thus, training is a must for the Bull Terrier. 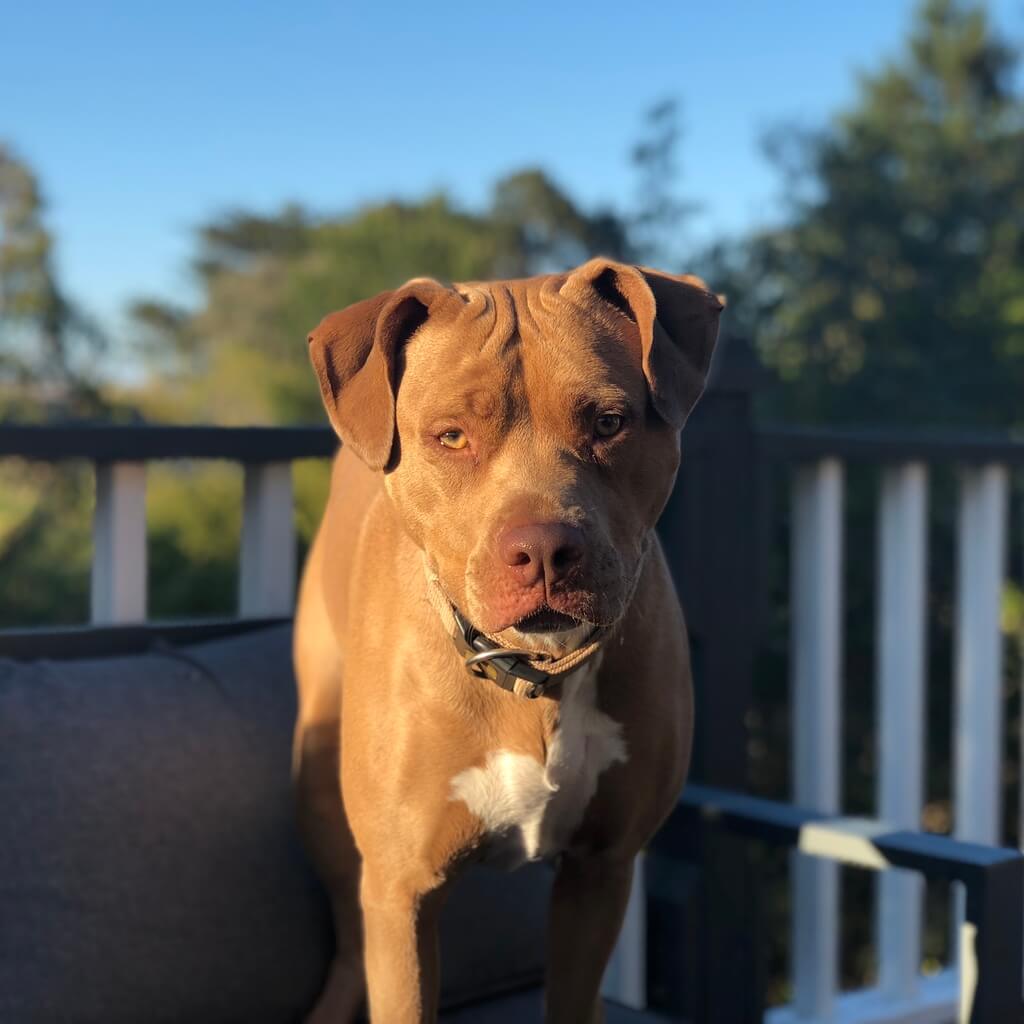 Colby is lighter in weight, as compared to the other types of Pitbull. Colby weighs between 30 to 55 pounds. Though Colby is not the original breed, they have the same bloodline as the Pitbull. Colby is encouraged as police dog breeds because of their intelligence, alertness, smartness, and spontaneous acting (taking action) skills. They have a masculine and strong body. If you notice Colby, they carry the confidence and pride of being a working and family dog.

Colby is an adorable and socialized one. They love to spend time with their master and ponder around them. They are very caring and respectful. We need to train them at a very young age, else it can become a pretty challenging task to handle them later. 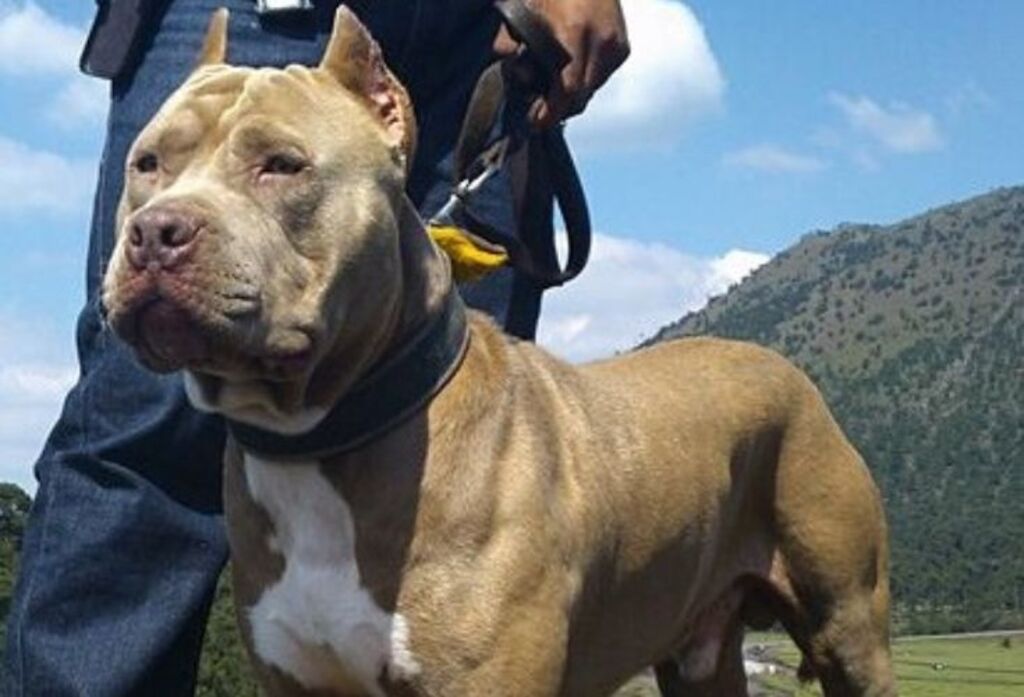 Monster Blue Pitbull is not much known to people. They are very rare breeds. Monsters are famous for policing or fighting dog breeds. They have a solid and masculine body. Apart from the body, they have a very sharp and strong jaw, thus they are very good at hunting. Though they seem to be scary and dangerous, they are very sweet and innocent. If you are interested in having fun and challenges in your home, you can adopt the Monster Blue Pitbull type.

Proper training at the right age can help you train and nurture them properly. If training is successful, they are reticent and obedient as family dog breeds. There are chances they can get excited seeing a new person, but your training can help resolve the problem. 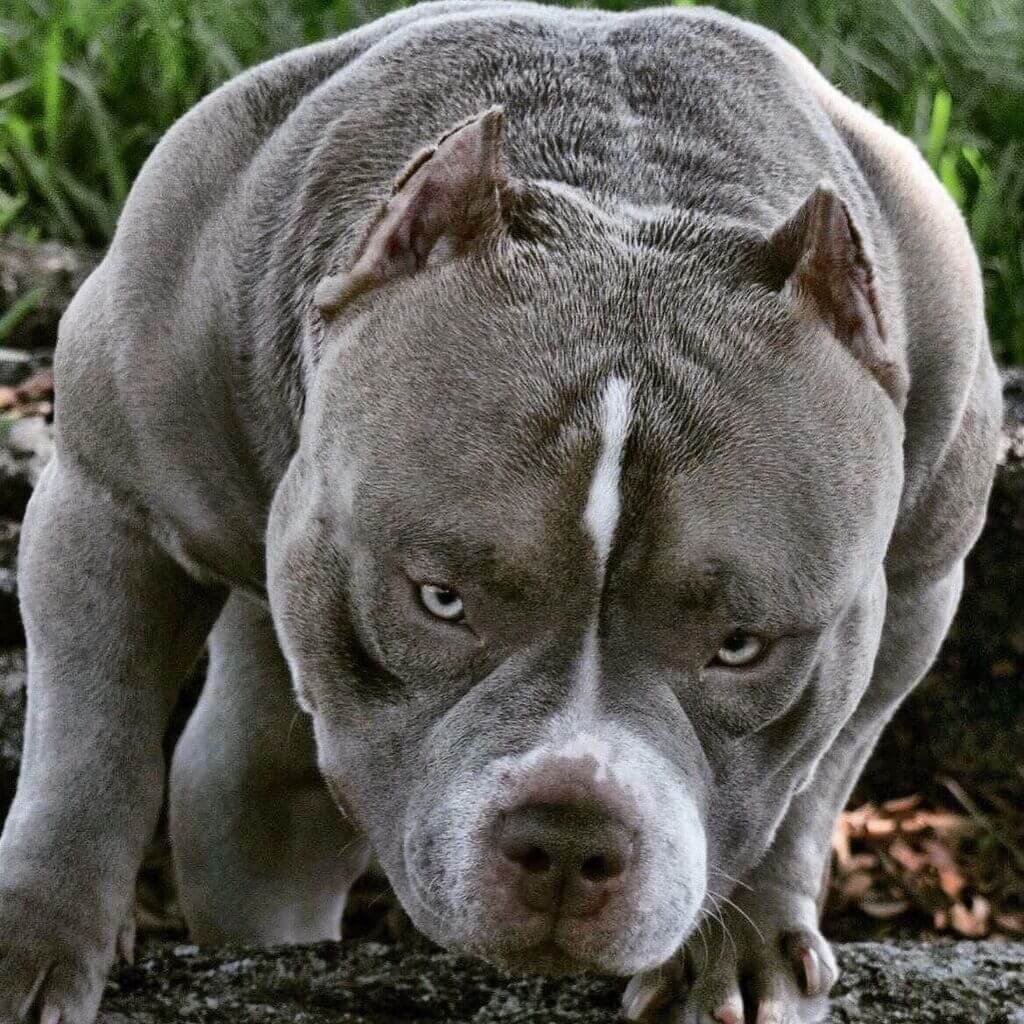 Stuffwaler is one of the original breeds of the Pitbull type who was born for fighting. They have a solid masculine body structure. Weighing between 65 to 90 pounds, they are strongest amongst the other types of Pitbull. They are not meant to be a family dog breed.

They have a very aggressive and suspicious nature. It is challenging to win their trust and respect. Thus, only police forces or guardian forces adopt Stuffawlers. They have a powerful instinct, conservative nature, and strong noticing skills. Therefore, training them at a very young age can make them a very loyal and responsible working dog breed.

As we see and learn about the different types of Pitbull, we are now clear that they are a working breed but not a family dog breed. They belong to the groups of fighting dog breeds, which makes it a bit challenging to train and set them as family pets.

The Pitbull has served as a fighting, hunting, and policing dog breed from the early ’80s, thus they are aggressive and intense. Though the intrinsic nature of Pitbull is fierce and aggressive, it has transformed with time and now is popularly known and accepted as a family dog.