Are you planning to add a cute kitten to your family but are stuck between a gorgeous gray cat and an adorable fluffy white cat? Don’t fret; get a grey and white cat, or just get both! Cats are playful and friendly little fur buddies who are always curious to know their surroundings and people. Felines are available in so many different breeds, sizes, patterns, and colors that sometimes, it’s a bit challenging to pick the one for yourself. One of the most popular color combinations is grey and white cat breeds. These feline breeds are also known as “bicolor” or “piebald,” as their white fur is combined with other colors.

Don’t know much about gray and white cat breeds? No worries, keep reading this blog!

Today in this blog, we’ve gathered the top 15 best gray and white cats in the world. From snuggly Persian cats to cuddly Munchkin felines, we’ve added many types of cats, including longhair and shorthair. So, keep reading this post till the end and pick your favorite grey and white cat for your home.

Let’s dive into the list of white and grey cat breeds. 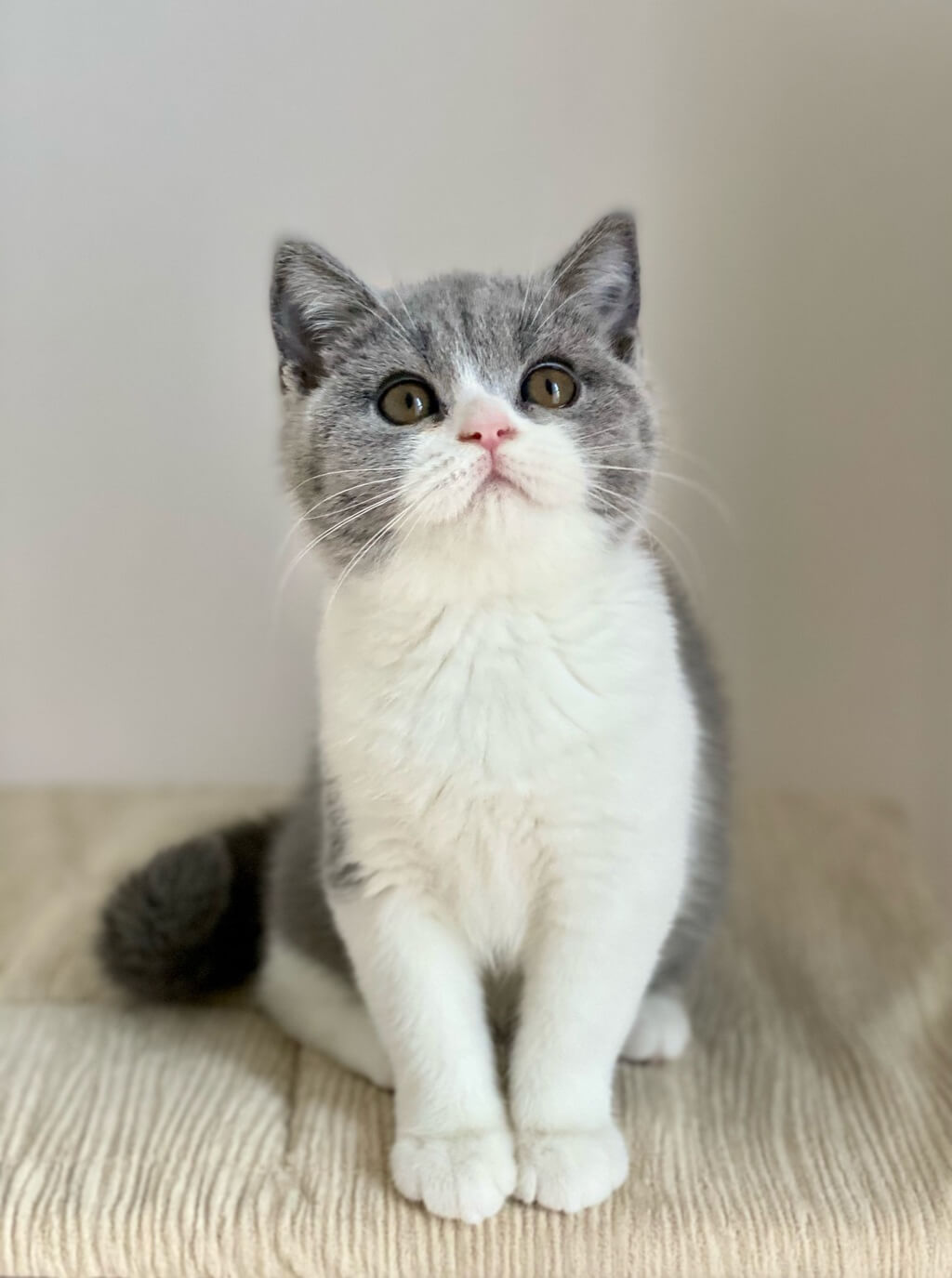 Also known as the British Blue, British Shorthair is an affectionate and adaptable feline. Even though they love to play with other pets and humans, they don’t like being lap cats; instead, they’ll sit next to you.

These felines are healthy and large animals that can weigh upto 20 pounds. These cats are chill and like to spend time alone and play with puzzle toys. They’re also easy to train, so you can use traits to teach them anything. 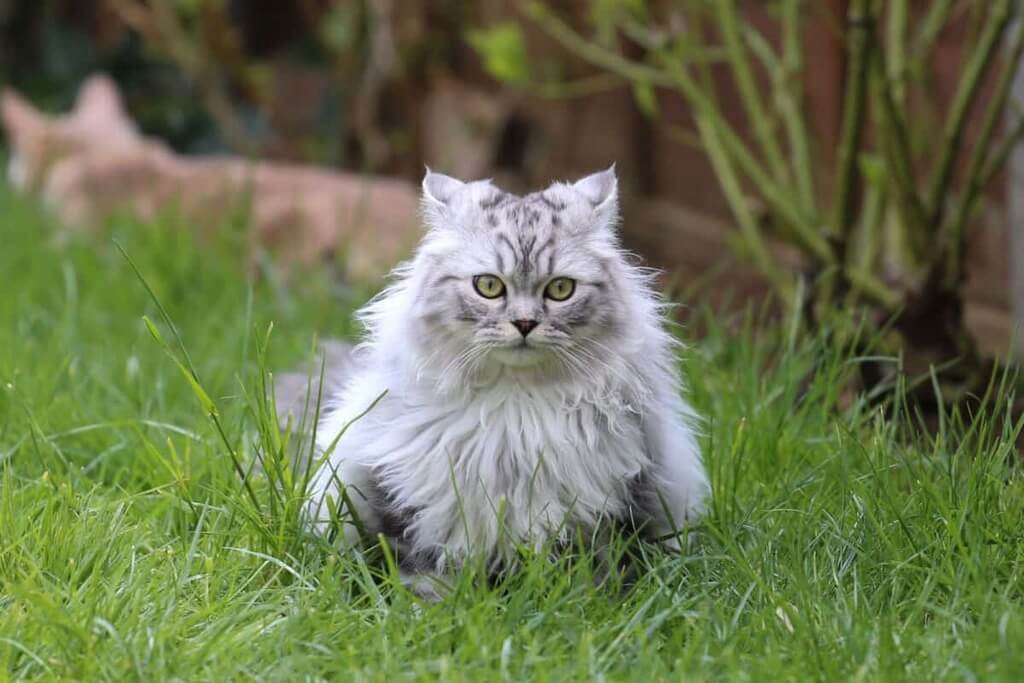 One of the most popular cat breeds in the world is Persian. This feline knew by other names such as Iranian cat, Shirazi cat, and Shiraz cat. Many things make this kitty special and unique among its cat breeds, from its deep eyes to fluffy and soft coat.

Because of its glamorous and elegant appearance, people love to add these kitties to their families. They have a sweet and docile temperament. When it comes to grooming and maintenance, you have to pay extra attention to them. These little fur babies are also prone to many health issues. So you have to take them to the vet for regular checkups. 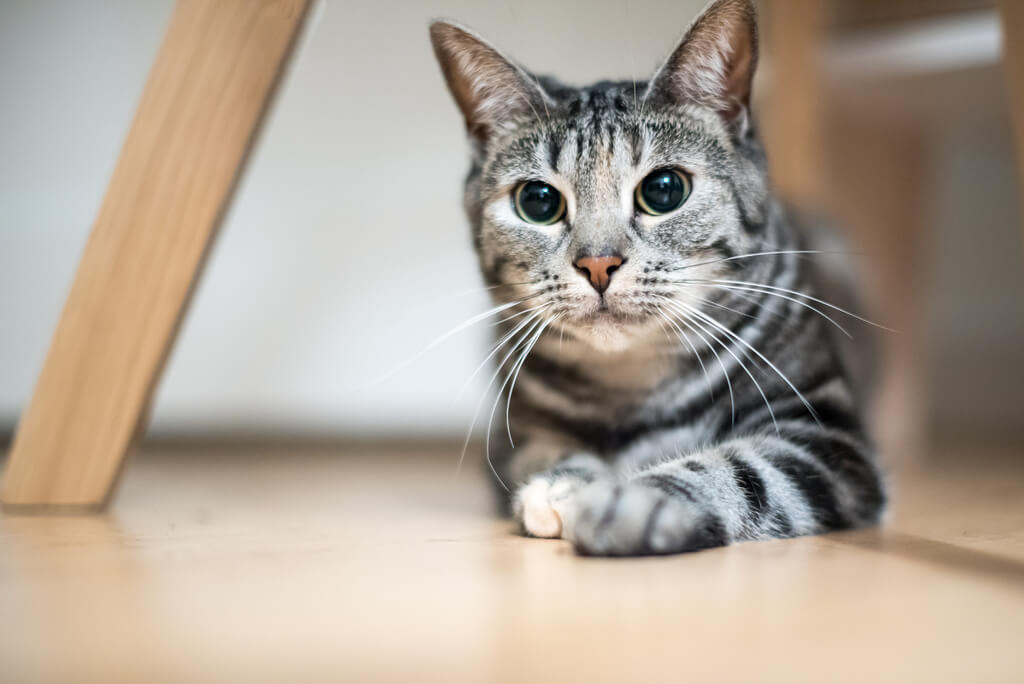 This is one of the natural cat breeds that came to life without any intervention from humans. Even some cat experts believe that they’re one of the original house cats as they were domesticated felines for thousands of years.

European Shorthair cats are quick to learn and easily adapt to their surroundings and changing environments. That’s one of the top reasons why people choose these cats as domestic cats. Due to their European heritage, these cats love to please their owners. 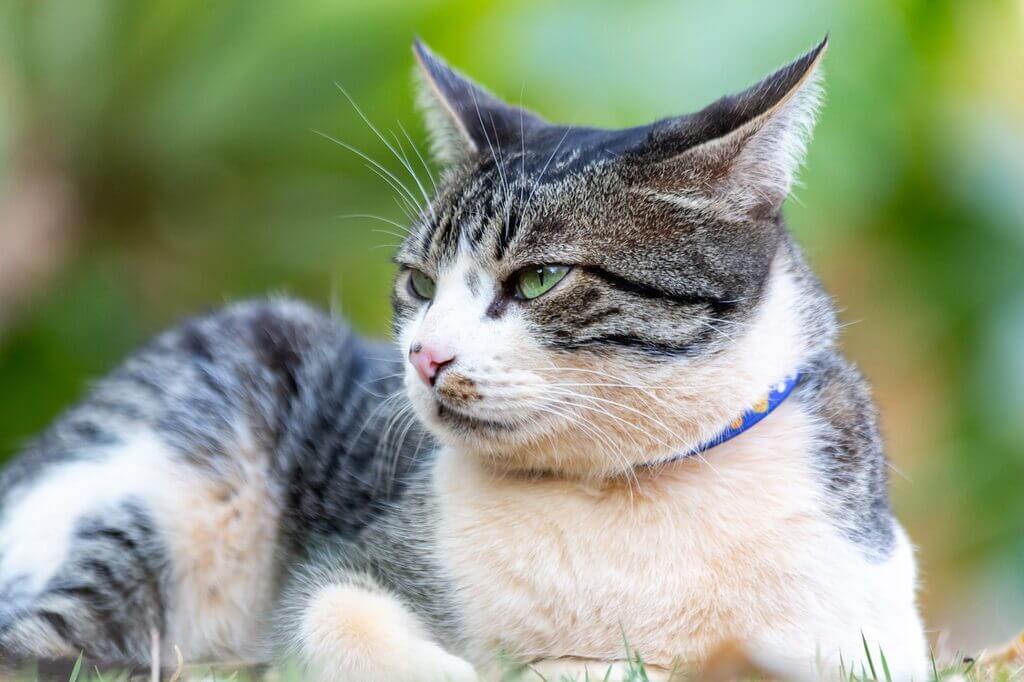 This cat breed is native to New York. These felines have a wiry, crimped coat that looks unique and makes them different from the other cats. These coats are hypoallergenic, which is actually a result of a natural genetic mutation.

American Wirehair comes in many colors, but grey and white are the most common. For grooming, they don’t need much of that. All they require is regular bathing and cleaning. These felines are loving, loyal, and lovely, which makes them perfect family pets. 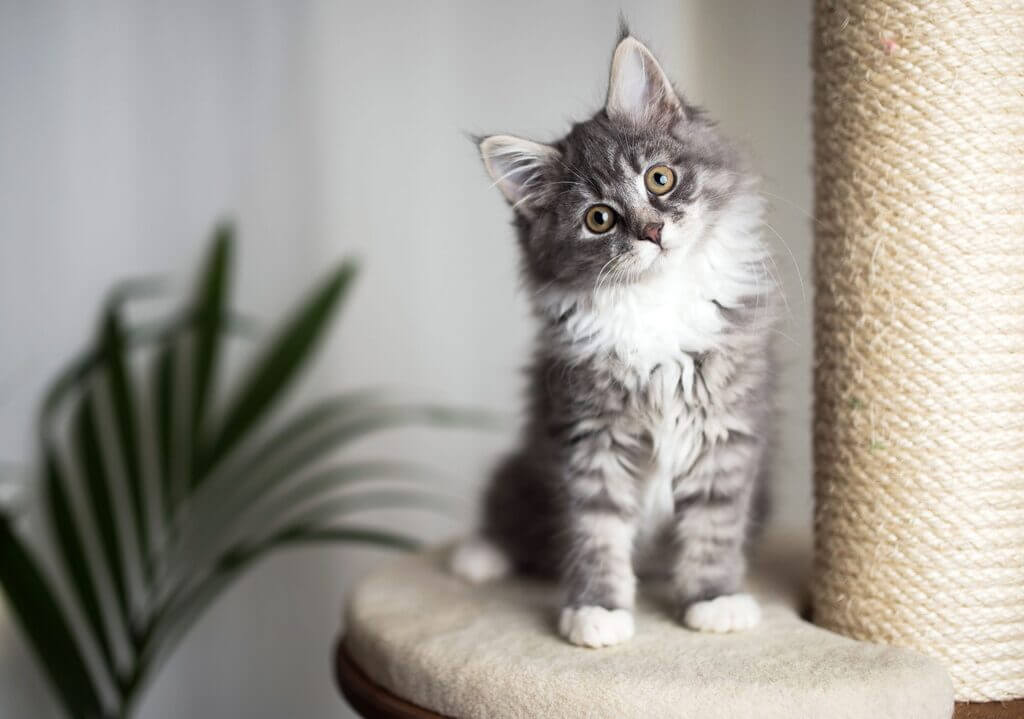 Do you know that Maine Cane is among the longest cat in the world?

Yes, a Maine Coon cat named Stewie, which is 48.5-inches in length, holds the world record of being the world’s longest cat!

These felines are large and muscular breeds that can weigh upto 17 lbs. These cats are also called many names, such as American Longhair, Coonie, American Snughead, Maine Trick Cat, American Shag, Maine Cat, and American Snughead. So, What are these cats called in your area?

Thinking about their personality and behavior. No worries, these Maine coon cats are super sweet and friendly. They also have an unusual way of communicating: they’ll meow and purr with chirping and cheeping sounds. 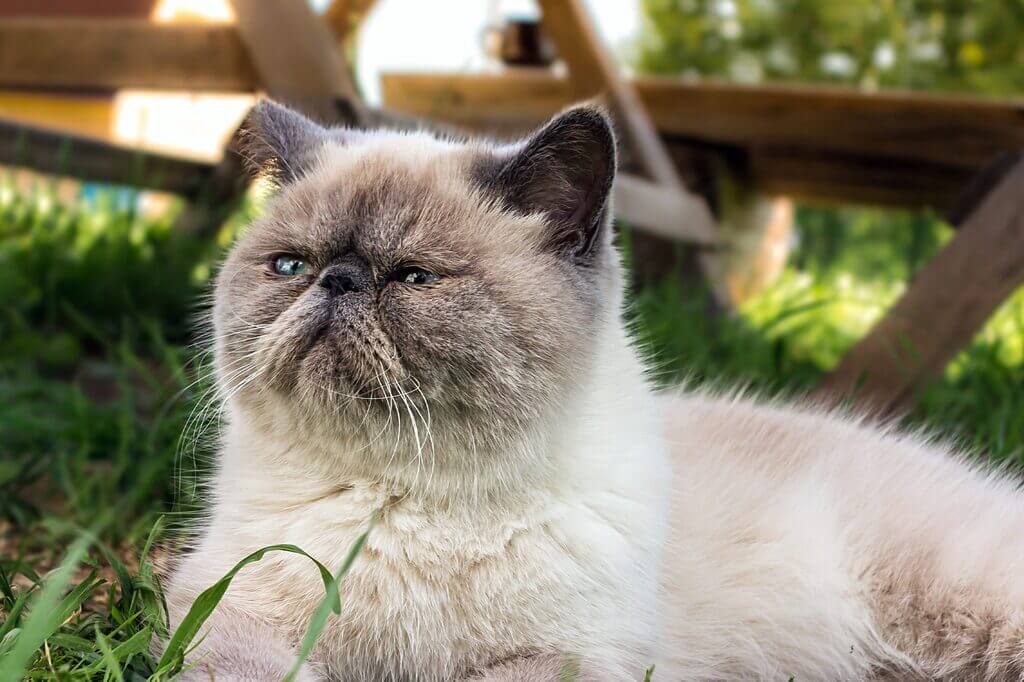 This cat breed is actually essentially a short haired Persian. Why? That’s because it was a result of crossing American shorthairs with Persians in the early 1960s. Later, other breeds like Burmese and Abyssinian were added to the breeding program. This results in various fur coats and colors with short haired and long-haired features.

Exotic shorthair cats or Teddy bear cats are sweet, affectionate, and fun-loving creatures. They have similar personalities and characteristics to their Persian cousins. They’ll never leave their owner’s side no matter what the situation is. 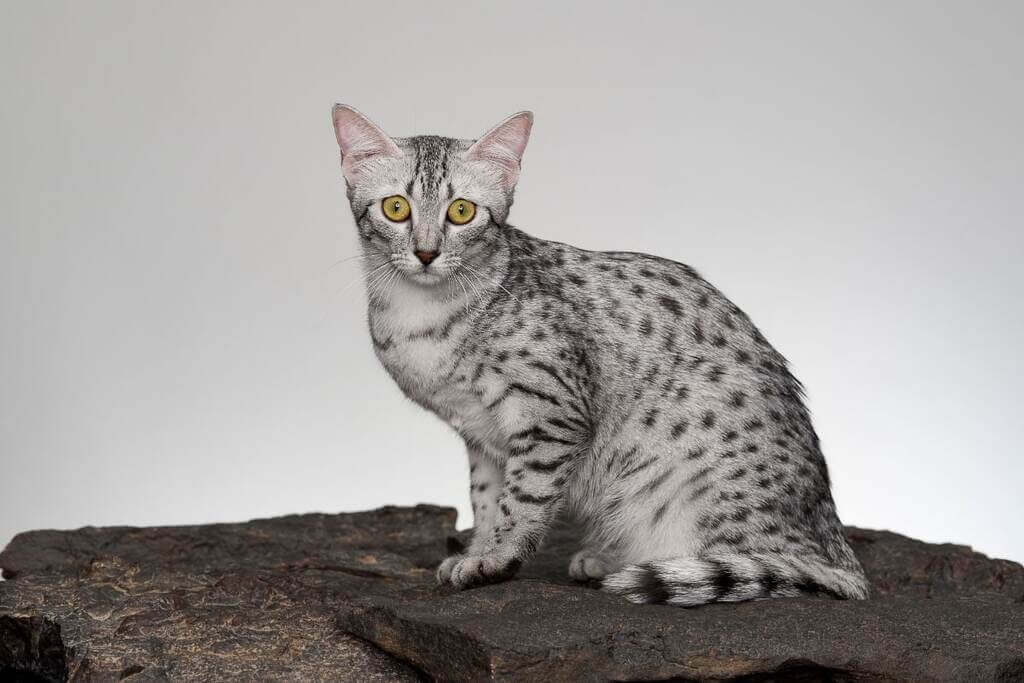 Another beautiful grey and white cat is the Egyptian Mau which is loyal and sociable. This feline has many naturally-occurring spots on its coat, making them even more cute and lovely.

They’re very active even as kittens, and later they develop lean and athletic bodies. So make sure you give them cat food filled with protein and nutrients. Another surprising fact about these felines is that they’re well known for their agility and speed.

An Egyptian Mau cat can get up to 30 miles per hour!

These cats are also expressive and don’t hesitate to vocalize their happiness and feelings. 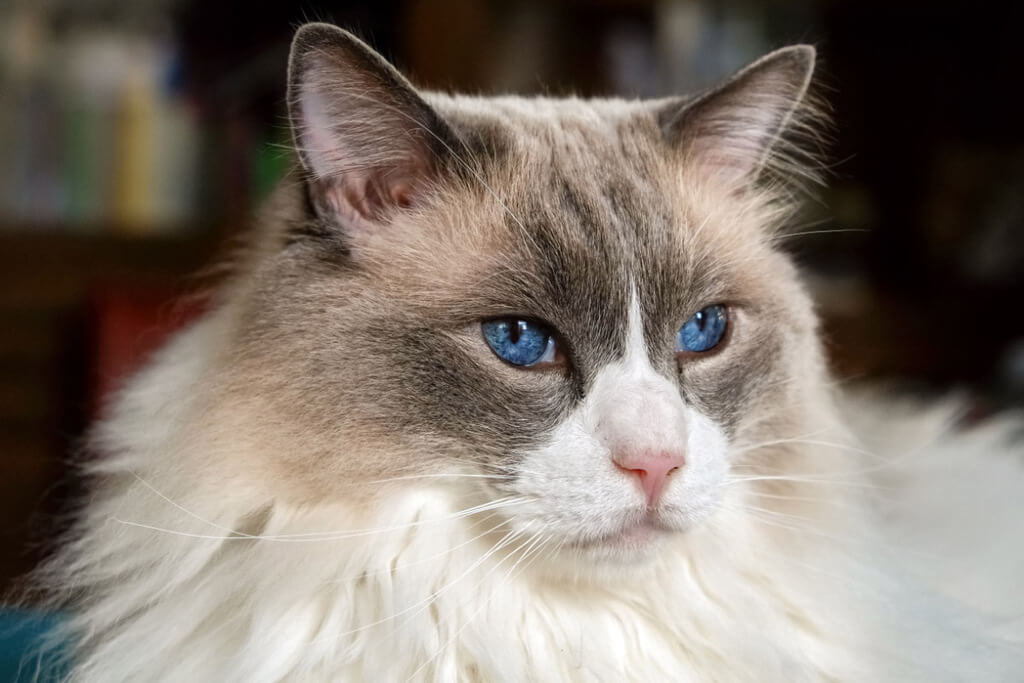 Don’t look directly into the eyes of Ragdoll cats…You’ll immediately fall in love with them!

This white and grey cat has deep blue eyes that can easily intimidate anyone. The nature of these cats is caring, friendly, and loving. They’re very sociable and adaptable and can settle into any home. All these things make them perfect family cats in households with kids. 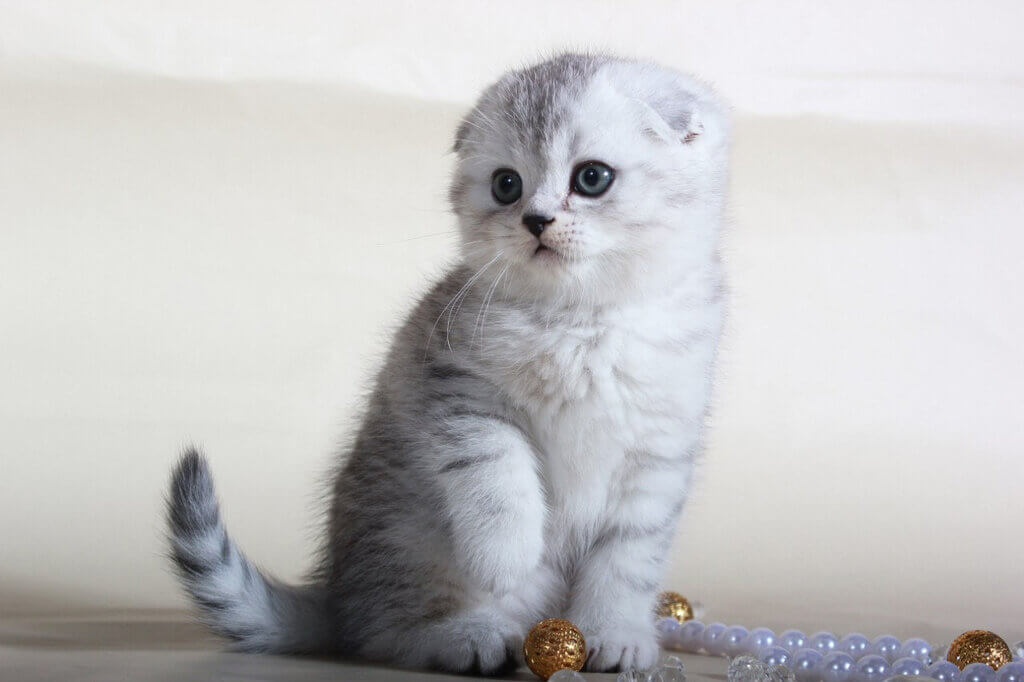 Scottish Fold, also known as the Highland Fold cat breed, has a dominant gene mutation responsible for changing their body’s cartilage. This may be the cause of the tell-tale folding of their ears. That’s why these grey cats look like owls.

Another mysterious and strange thing about these cute cats is that they sleep and sit in unimaginable positions. From sleeping on their backs with their paws up to sitting in a “Buddha Position” with their paws on their belly, you can find them in any position. 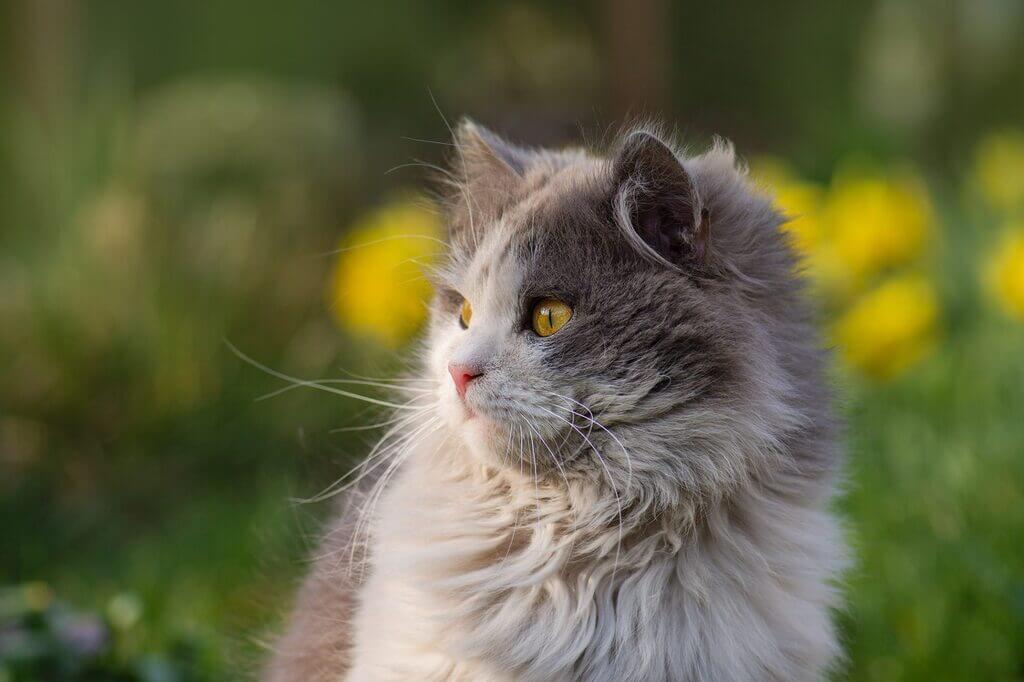 British Longhair is a cross between a Persian and British shorthair. These felines have a compact but powerful cobby body, a broad chest, and strong legs. Their head is big and round, while their nose is small and cute.

Other names for British Longhair are British Semi-Longhair, Britannica (Europe), British Longhair Variant, and Lowlander (United States). British Longhair cats are laid-back, independent, and relaxed animals. With their teddy bear-like appearance, these cats love to stay close to their owners. So their overall behavior is quiet and calm, perfect as family pets with small kids and other pets. 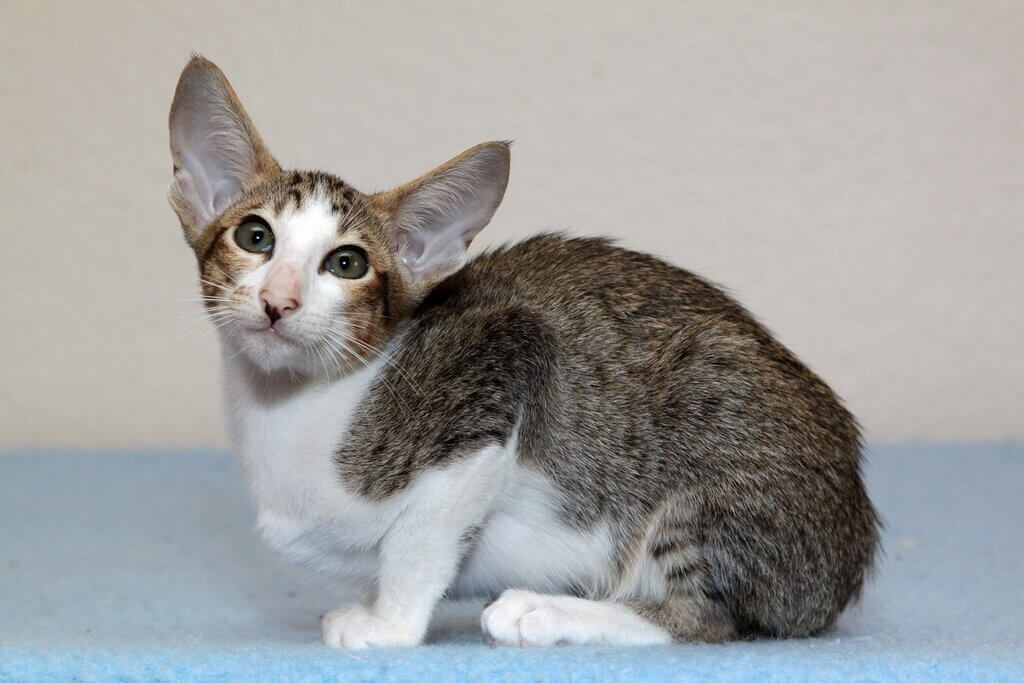 Next, the grey and white cat on the list is this beautiful Oriental Bicolor cat. This breed is a mix between the Siamese and American Shorthair breeds. These felines are active, loyal, and intelligent. They’re also quite curious to know everything around them, which is said to be inherited from their roots.

These cats have separation anxiety, so you can’t leave them alone in a room for a long time. You can keep them busy by giving them challenging and interactive toys. 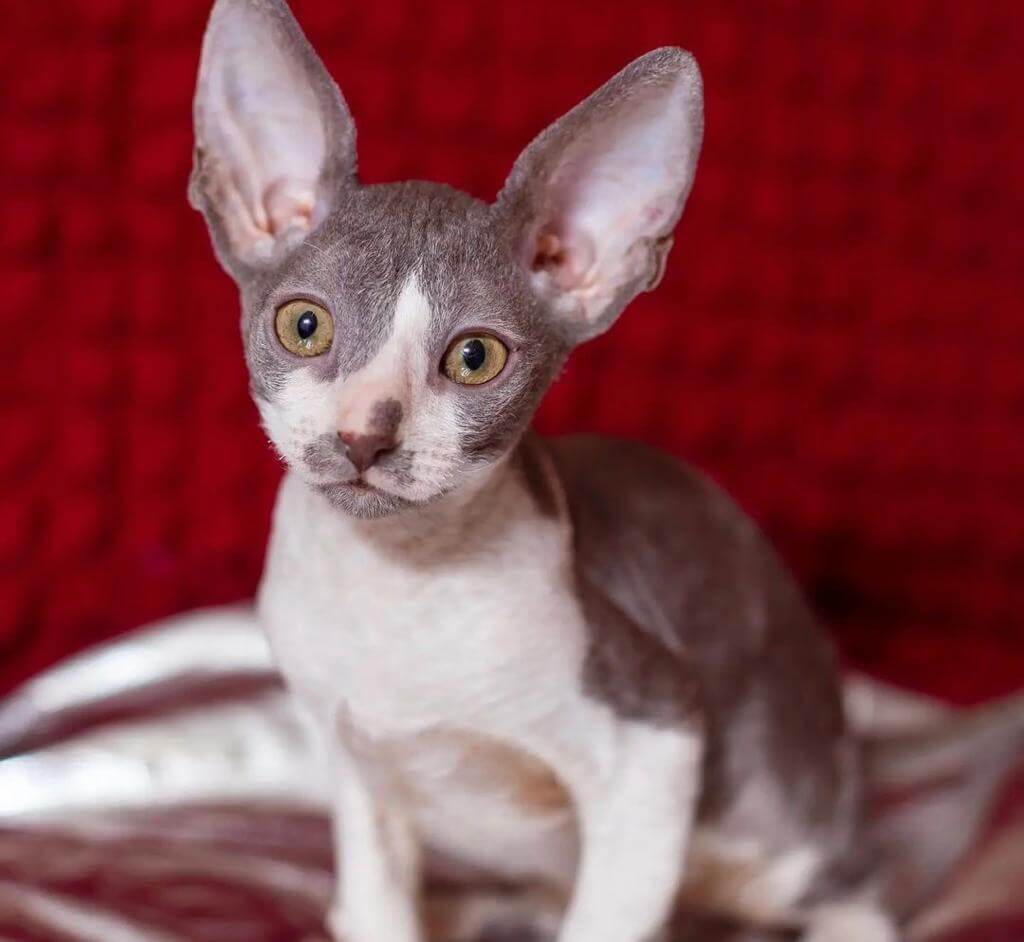 Just at one glance, you can notice that these cats have a unique appearance. They have many distinctive features like curly whiskers and wiry fur coats, which sets them apart from other breeds.

Cornish Rex is a highly active and energetic animal, so they will always do something. You’ll find them climbing the highest point in a room and sometimes breaking and chewing the furniture. So be ready to have some fun and adventure with these kittens. 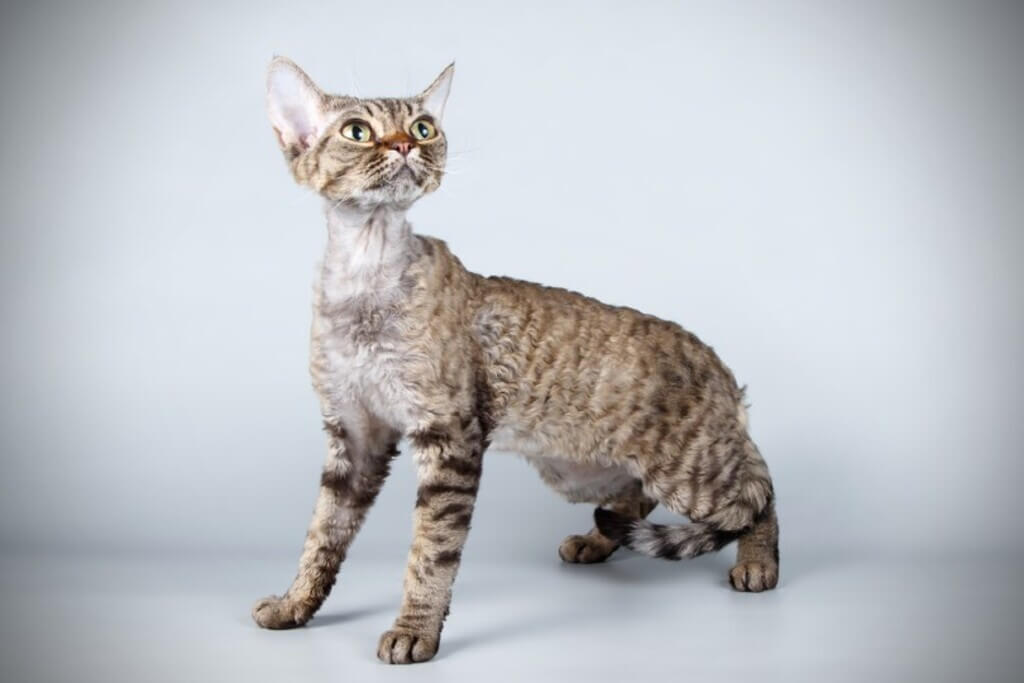 Devon Rex is similar to the Cornish Rex as they are considered cousins. Overall both cat breeds have similar appearances, but the only difference is that the Devon Rex coat has a looser curl than the Cornish Rex. These cats have big ears that make them have an elfin appearance and are instantly noticeable.

The Devon Rex is a highly intelligent and great family-friendly pet. However, they need challenges for their body stimulation. Be ready to give them puzzle toys and play games like fetch with them. Also, these cats love to interact with new people and pets. 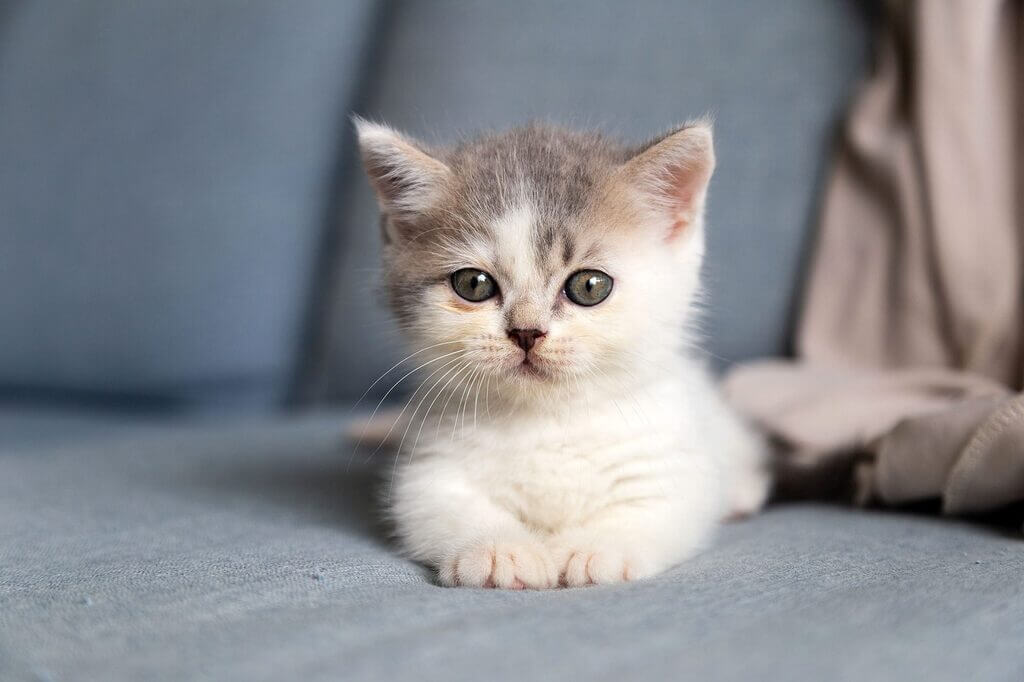 The breeding is history as unique as their name, Munchkin. This breed was developed from a pregnant cat named Blackberry, who had short legs. She was rescued in 1983 by Kay LaFrance. Later this cat delivered four kittens; two of them had short legs.

Munchkin cats are also called American Munchkin, Midget cat, Midget kitty, and Wiener cat. These furry balls are super energetic and playful. These short-legged cats get along well with kids, cats, and dogs. 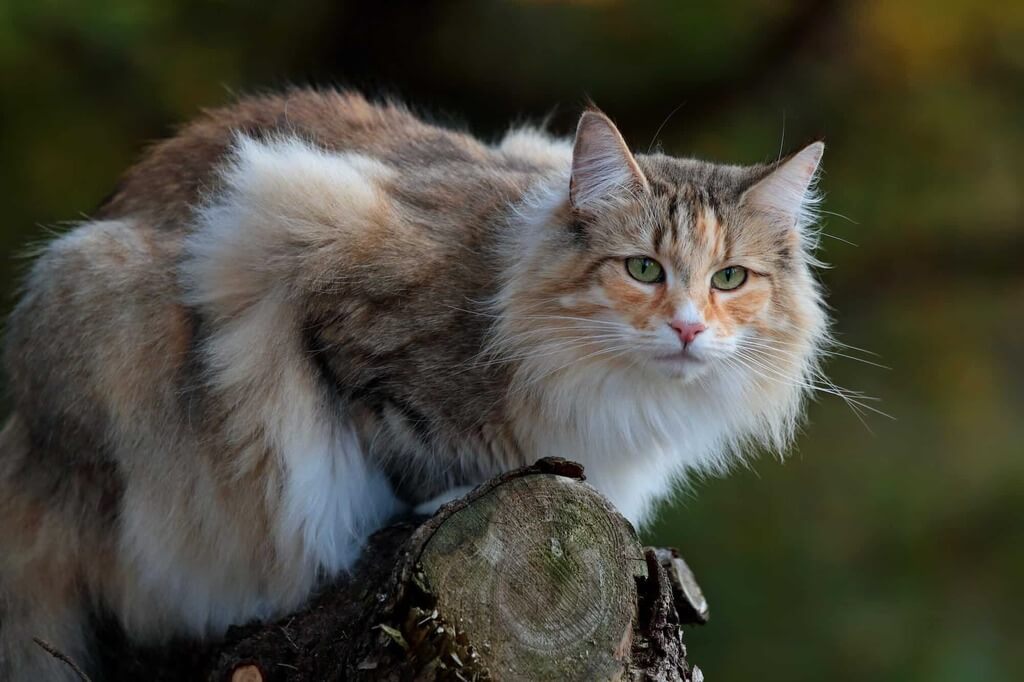 Norwegian Forest cats, also known as Wedgies look pretty similar to the Maine Coons in terms of size and appearance. Though their name is forest cats, they are pretty kind and gentle.

These cats are mellow, active, and love to climb, so make sure you have enough space in your home so that they can hang around comfortably. These cats are also independent and don’t want their owner’s presence always. So you can leave them for some time to play alone or with their pets.

So this is all about the gray and white cat breeds. Cats are curious, cute, and cuddly animals. So, if you’re planning to adopt a cat, don’t focus too much on its appearance; consider its personality and temperament. So, whether its white or gray cat breeds, get the one whose personality you love the most.

I hope this in-depth guide on grey and white cat breeds has helped you to narrow down your options for your next pet adoption. So, if you find this article informative, please share it with your family and friends looking for options to adopt a cat.