72 views
Table Of Contents hide
1 Species of Wolves
2 Wolves Don’t Howl at the Moon
3 Dogs Are Somewhat Similar to Wolves
4 The Alpha Wolf Is a Myth
5 Only Two Wolf Species Are Remaining
6 Wolves’ Eyes Glow to See in the Dark
7 Grey Wolves Don’t Attack Prey That Stands Still
8 India Wolves Are the Smallest
9 Wolves Can Swim Up to 8 Miles
10 Wolves Mate for Life
11 Conclusion
We all know that wolves are potent hunters and fiercely loyal pack animals, but some interesting facts about wolves still need to be widely known. From their complex social structure and unique physical adaptations to the intriguing ways they use the environment to survive, these creatures have much more to them than meets the eye.

To discover more, read this blog as it discusses some lesser-known wolf facts you’ve probably never heard of that will surely surprise you while giving you new insight into these wild canines. 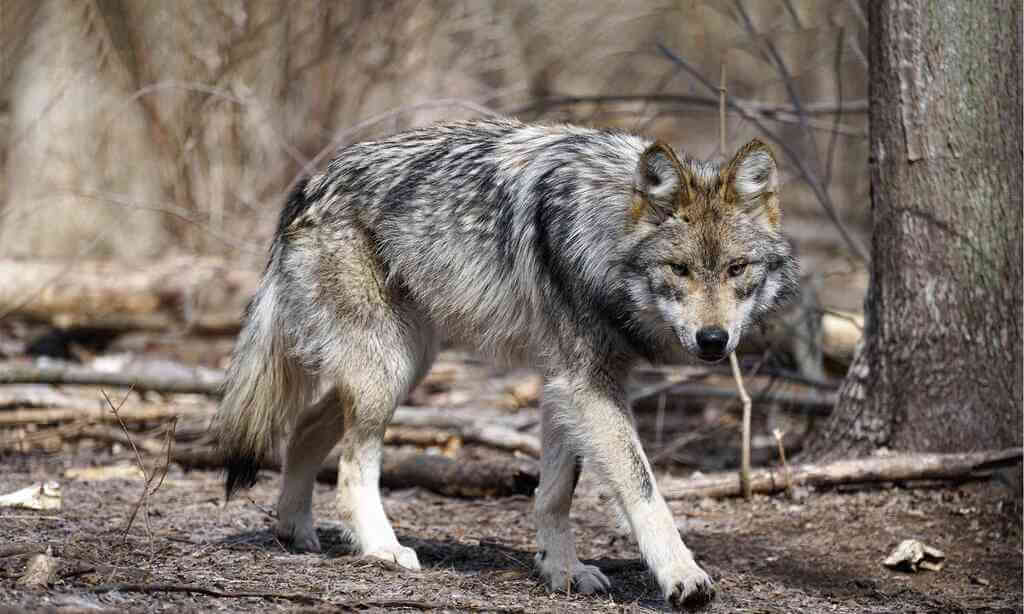 One of the first interesting wolf facts you’ve probably never heard of is that wolves have different species.

While some are more widespread than others, we will focus on the most popular and prominent wolf pack: Grey wolves.

Grey wolves are most commonly found in North America. They are the most social of all canids and live in large packs with several other adults, yearlings, and pups.

However, even though these wolves are named according to the standard wolf colors found in the species, not all wolves that fall under these species have the exact same grey coat.

It is because there are subspecies of Grey wolf kinds, and their coat colors vary from brown to ash.

Therefore, it becomes harder to distinguish between these wolf kinds unless and until you know their characteristics, behavior patterns, and body structure well.

Other than them, there are other rarest forms of wolf species, Ethiopian wolves and Red wolves. The only species of wolf found in Africa is the Ethiopian wolf, the most endangered predator on the continent.

Wolves Don’t Howl at the Moon 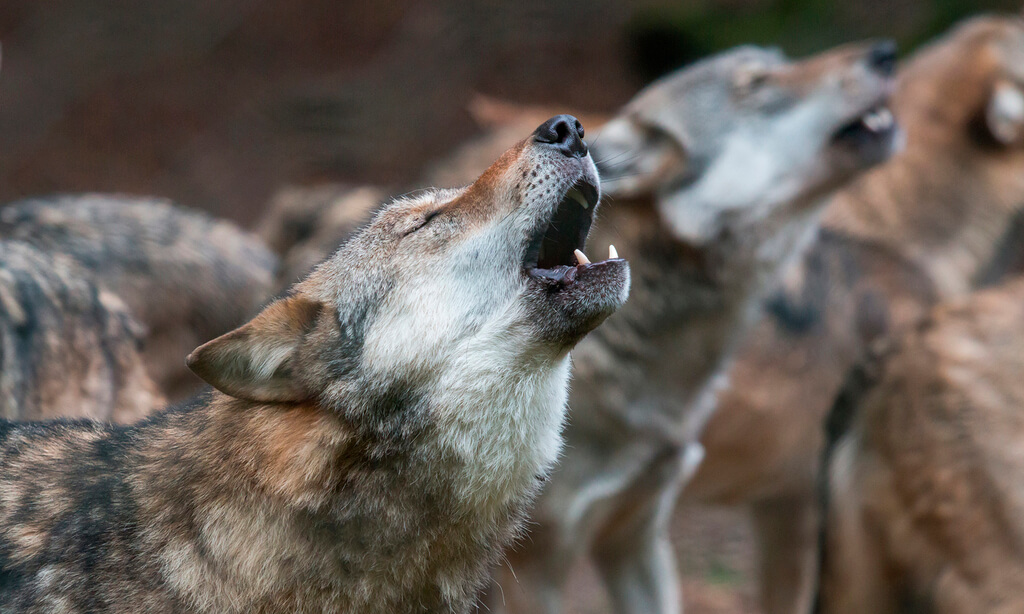 In popular culture, wolves are often portrayed as howling at the moon, but this is a myth. Wolves do howl for various reasons, but the moon has nothing to do with it.

Wolves communicate by howling, which can mark territory, scare away intruders, or just say hello to other pack members. They may also howl in response to certain sounds, such as sirens or other howling wolves.

The myth of wolves howling at the moon likely dates back to ancient folklore and has been passed onto modern culture.

Although the myth is not valid, wolves are still fascinating animals that deserve our attention and appreciation.

Dogs Are Somewhat Similar to Wolves 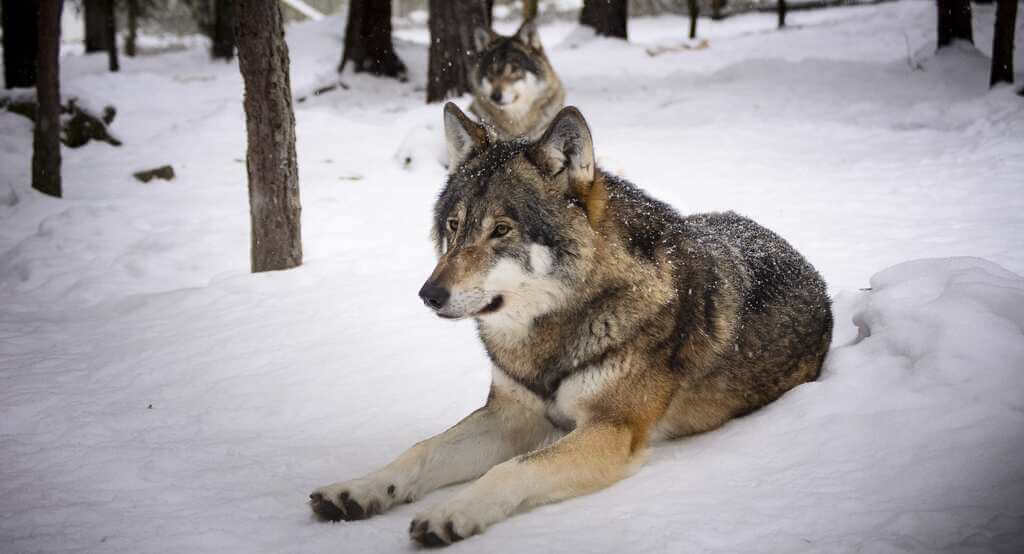 Wolves are some of the most interesting animals on the planet. They’re complex, intelligent, and highly social. But did you know they are also somewhat similar to our favorite canine friends, dogs?

It is one of the lesser-known wolf facts you’ve probably never heard of till now. So, here’s all about it,

Canidae, which also contains foxes, jackals, and coyotes, is a family that includes dogs and wolves. They, therefore, have a common origin and are more linked to one another than any other Canidae species. Plus, dogs and wolves share a lot of the same DNA.

Dogs and wolves both make a variety of vocalizations, such as howling, barking, and whining, to communicate with the other members of their pack.

However, the fact that wolves have not been domesticated, in contrast to dogs, is one of the most obvious distinctions between the two species.

The Alpha Wolf Is a Myth 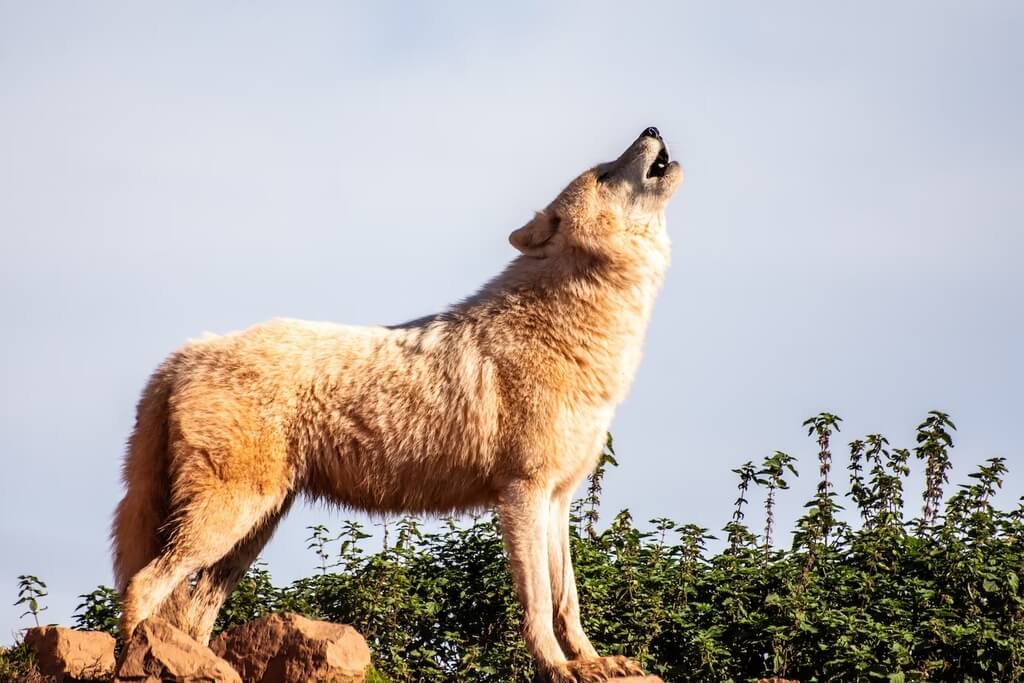 It’s time to put the alpha wolf myth to bed. For years, we’ve been led to believe there is a strict hierarchy in wolf packs, with a single alpha male leading the group.

However, this isn’t true. Wolf packs are much more egalitarian than we know, and the idea of an alpha wolf is nothing more than a myth.

So why has the alpha wolf myth persisted for so long? It’s likely because it’s a simple way to explain wolf behavior.

But the reality is that wolves are far more complex than we give them credit for, and their social structure is much more nuanced than the alpha wolf myth would have us believe.

If you’re interested in learning more about wolves, check out some of the latest research on their social structure – you might be surprised by what you find!

Only Two Wolf Species Are Remaining 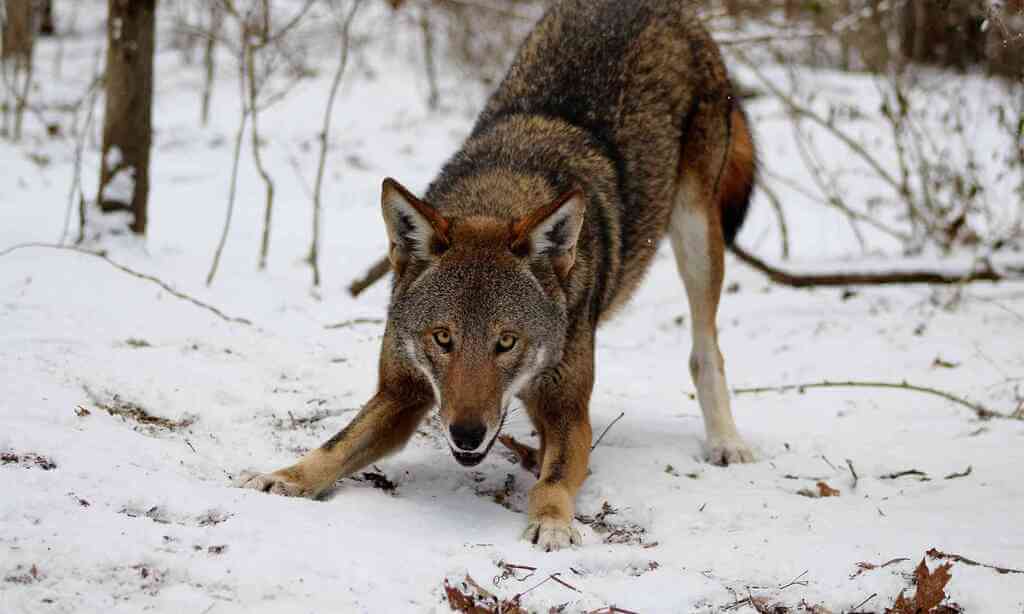 Over the years, there have been an incredible 24 extinct wolf species, and currently, only two species remain the gray wolf and the red wolf.

Of the remaining two types of wolves, the gray wolf is the most common and is found living in the northern hemisphere of America, While the red wolf is the rarest and only found in small pockets of the southeastern United States.

Both species are considered endangered, with their populations being threatened by habitat loss, human persecution, and disease.

As apex predators, wolves play a critical role in maintaining healthy ecosystems and are essential to global biodiversity and wildlife.

Wolves’ Eyes Glow to See in the Dark 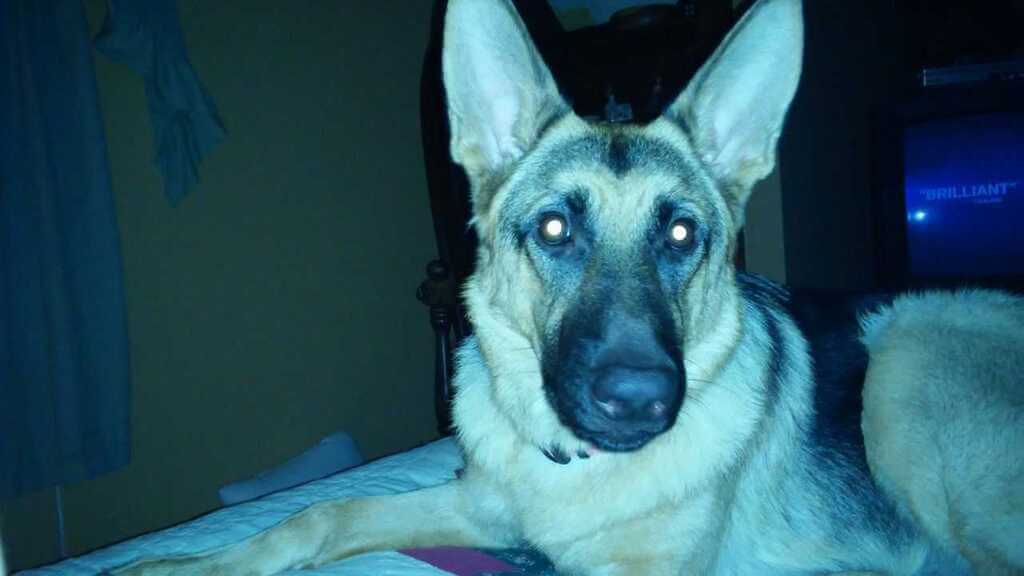 Wolves have excellent night vision, giving them a distinct advantage when hunting at night.

Fascinatingly, wolves’ eyes actually glow in the dark because of a phenomenon called ‘eyeshine.’

This occurs when light is reflected off the tapetum lucidum, a layer of tissue in the back of the eye. This reflective layer amplifies the light, helping wolves to see in the dark.

Additionally, wolves have vertical pupils, which allow them to focus more quickly in low-light environments.

It’s incredible that these animals, similar to their domesticated dog relatives, have unique adaptations that help them survive, navigate and communicate at night in the wild. 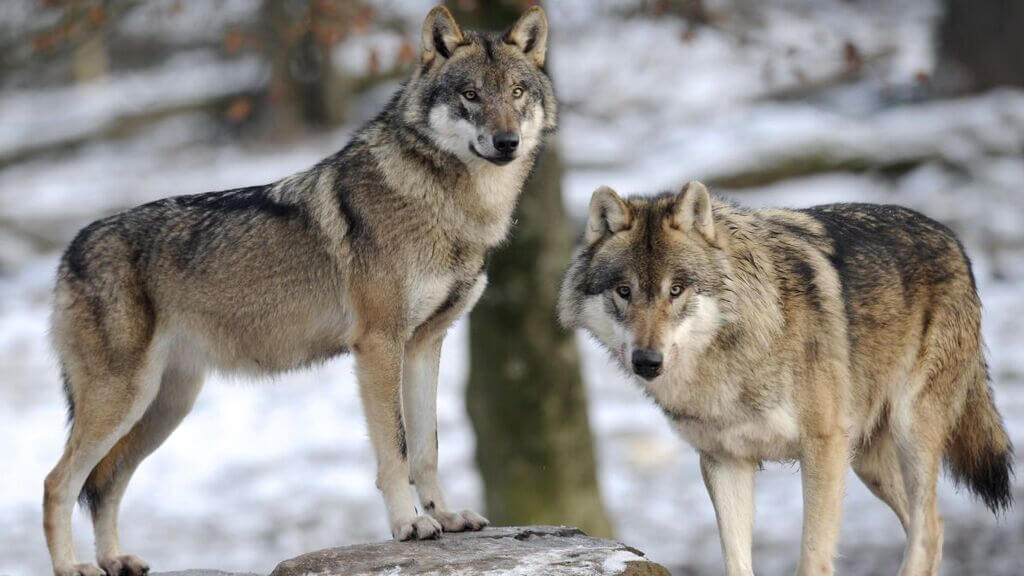 Gray wolves are one of the most feared predators in the wild, but they don’t indiscriminately attack any creature they encounter.

This is thought to be the result of their hunting technique, which relies on surprise and stealth. They are patient predators, waiting for their prey to move away from cover or make a noise, and then they pounce.

It makes them very skilled hunters, able to quickly distinguish between a potential meal and a stationary object. This behavior also serves to protect other species.

This interesting wolf fact is just one of many that are worth learning about and demonstrate the impressive abilities of these mighty animals.

India Wolves Are the Smallest 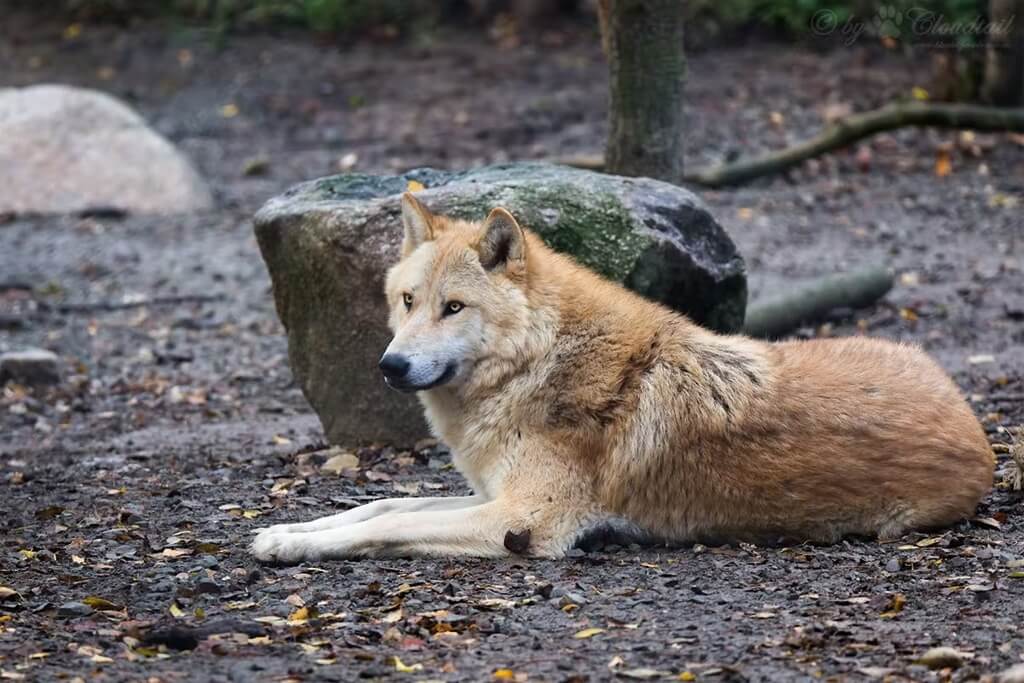 Indian wolves are the smallest species in the wolf family. They have been around for thousands of years and are found primarily in the northern and western parts of India.

These wolves are typically grayish-brown in color with white fur on the underside. They are also distinguishable by their slighter build and longer, more pointed muzzle than other wolf species.

Unlike other wolves, Indian wolves are solitary hunters and tend to prefer prey such as hares, birds, and rodents. They have also been known to scavenge and eat livestock and garbage.

As these wolves have adapted to the changes in their environment, they have become more tolerant of humans and are sometimes seen near villages and even cities.

Wolves Can Swim Up to 8 Miles 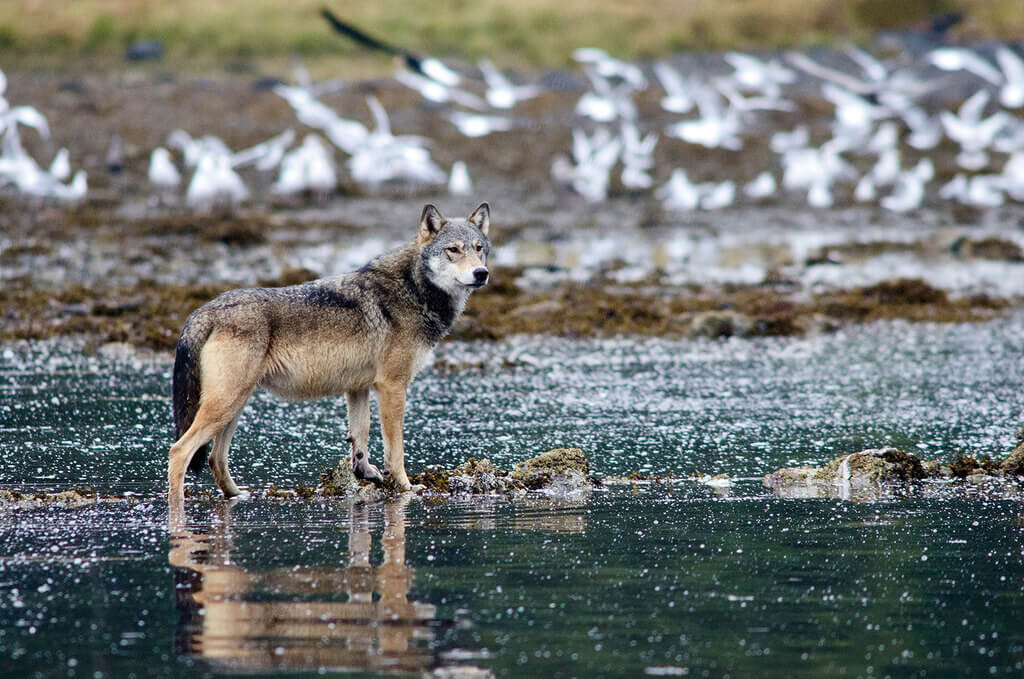 Did you know that wolves can swim up to 8 miles? This is truly remarkable. Wolves can swim to escape danger, find food, or simply cool off. They are strong swimmers and have the stamina to cover long distances underwater.

Wolves also have a great sense of direction and can use the stars and landmarks to help them find their way.

In addition, wolves can adjust their heart rate to conserve energy when swimming and can dive underwater to catch fish.

This is yet another example of the incredible adaptability of wolves and a testament to their impressive physical capabilities. 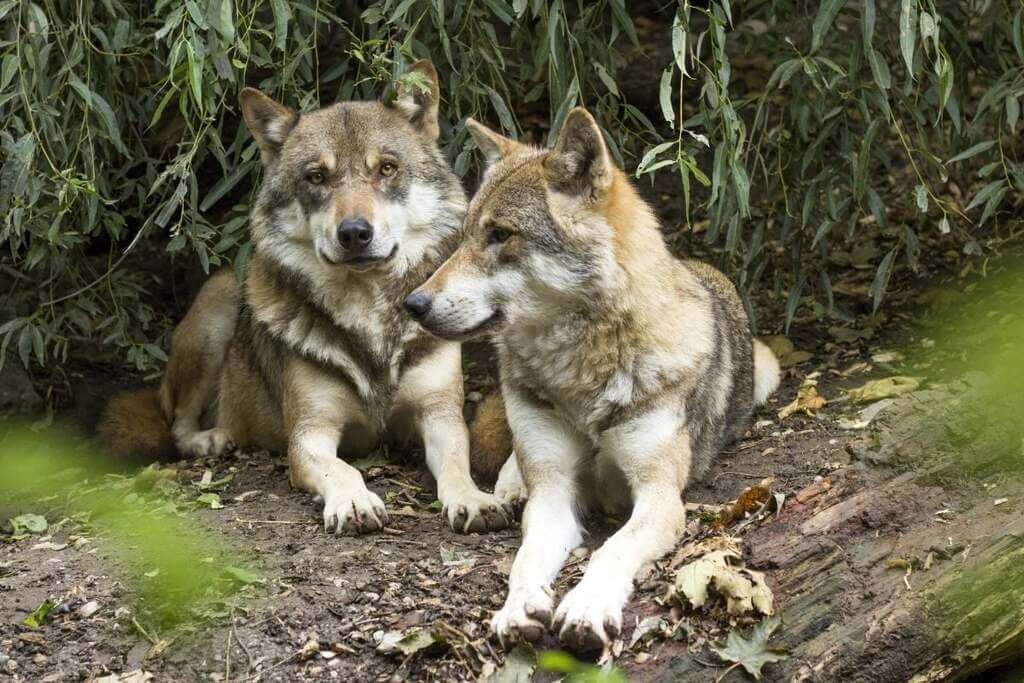 Wolves are known for their strong family bonds and loyalty, and mating for life is a testament to that. This is one of the most exciting wolf facts, as many animals need to form solid and lasting connections with one mate.

Wolves often form pairs at a young age and remain together until one dies. Although they may occasionally separate and find new mates, the bond of loyalty and trust between them is powerful.

Wolves also cooperate in parenting and sharing responsibilities, which further strengthens their bond.

Each pair member plays a vital role in raising their young and forms strong family connections with the other members of their pack to work together to ensure the survival and well-being of their group.

Wolves are fascinating animals that have adapted and evolved over centuries to survive in different climates and environments.

And not only are they adaptable to different habitats, but they also acquire advanced communication techniques and can form unlikely relationships with other species as well.

To give you a greater insight into the lives of wolves, we have shared a few interesting wolf facts you’ve probably never heard of.

While some myths still exist about these creatures, the facts about their existence and characteristics break it all.