The giant Alaskan malamute is a strong, sturdy breed of working dogs known for their strength and stamina. They are one of the oldest dog breeds in the world with minimum alterations in their original look and size. The Alaskan malamute giant is bred selectively for its size and its weight exceeds 100 pounds. These are huge sporting dogs that crave leadership and a high level of activity to avoid boredom. These dogs have been used for ages to pull heavy goods across Alaska and can pull a load of 10 times their weight. They were also used to hunt seals and bears.

The giant wooly Alaskan malamute may appear to you less like a dog and more like a hybrid of wolf and a bear. They have a thick double coat that makes them tolerant to extreme Alaskan temperatures. These dogs aren’t meant for beginners and novice pet parents as their stubbornness combined with their intelligence, makes them a bit hard to handle.

The great Alaskan malamute is of unknown origin but among the oldest known dog breeds of the world. They lived among the Inuit people and were used as sled dogs in the arctic as well as for hunting polar bears and seals. They are known to have crossed the land bridge from Siberia to Alaska accompanying the native people centuries ago.

The Alaskan malamute was discovered in the 1700s by exploring settlers and named after a tribe known as the Mahlemuts that settled in the Seward peninsula. The tribe uses these dogs for pulling heavy sledges of food and other necessities, hunting, and watching purposes.

In 1896, the gold rush brought many such cold tolerating dog breeds into the Alaskan regions, which were crossed with the native breeds but Malamute being an isolated tribe, prevented the crossing of the giant Alaskan malamutes thus preventing the loss of the native breed.

Through various breeding programs, different strains of malamutes were developed. Some of them are known as the Kotzebue strain and the M’loot strain. These dogs were used in both the world wars as sled dogs. Most malamutes present today have the Kotzebue as the common ancestor.

The great Alaskan malamute is also known by the people through the ‘Story of Balto’, a dog that delivered medicine to villages to prevent the diphtheria outbreak. There were many teams of such dogs that included the malamutes. They have also been used in the exploration of the south pole. 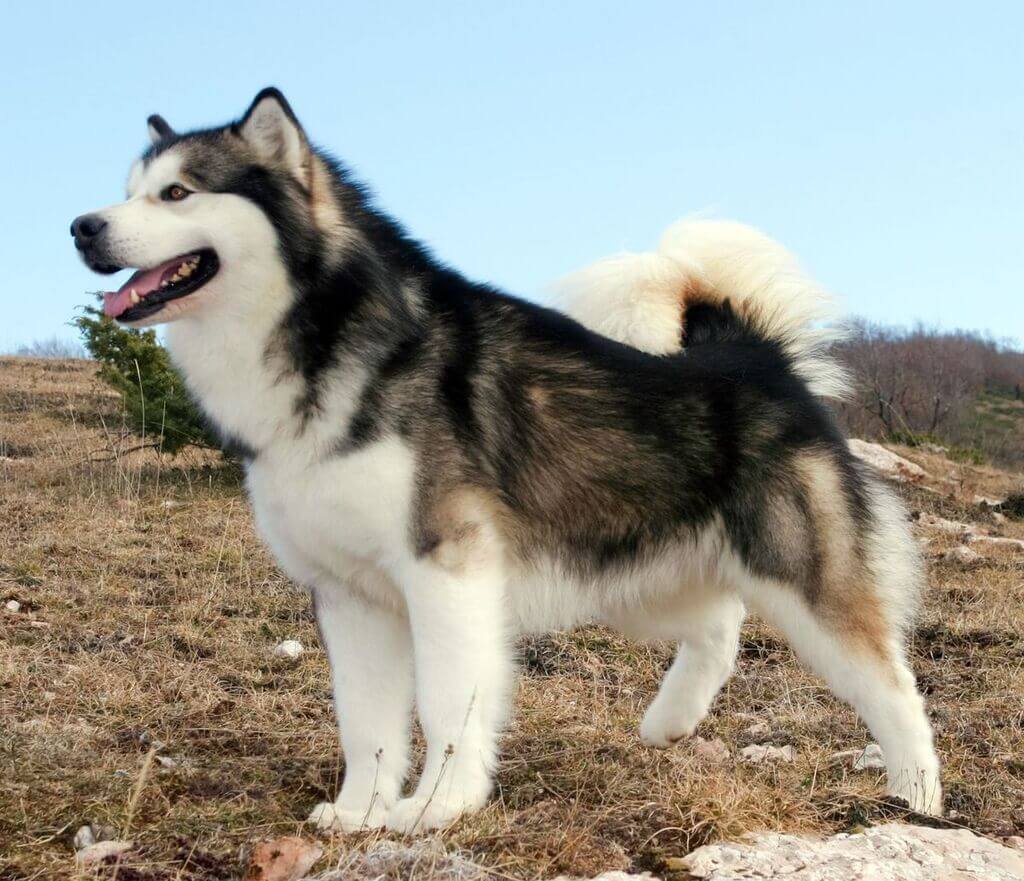 The giant wooly Alaskan malamute is as huge as its name suggests. The height of a giant malamute dog ranges from 30 to 35 inches and they weigh anywhere between 150 to 200 pounds. Female giant Alaskan malamutes are usually a bit smaller in size than their male counterparts.

The accepted standard for a malamute (regular sized) is a height up to 25 inches and weight not more than 85 pounds. Since the giant Alaskan malamute size is much different than that of the regular malamute, they aren’t allowed to compete in dog shows and competitions.

Size is the only difference between the regular and the giant Alaskan malamute.

The biggest Alaskan malamute named Tyson weighs 150 pounds and has a body length of 63 inches. 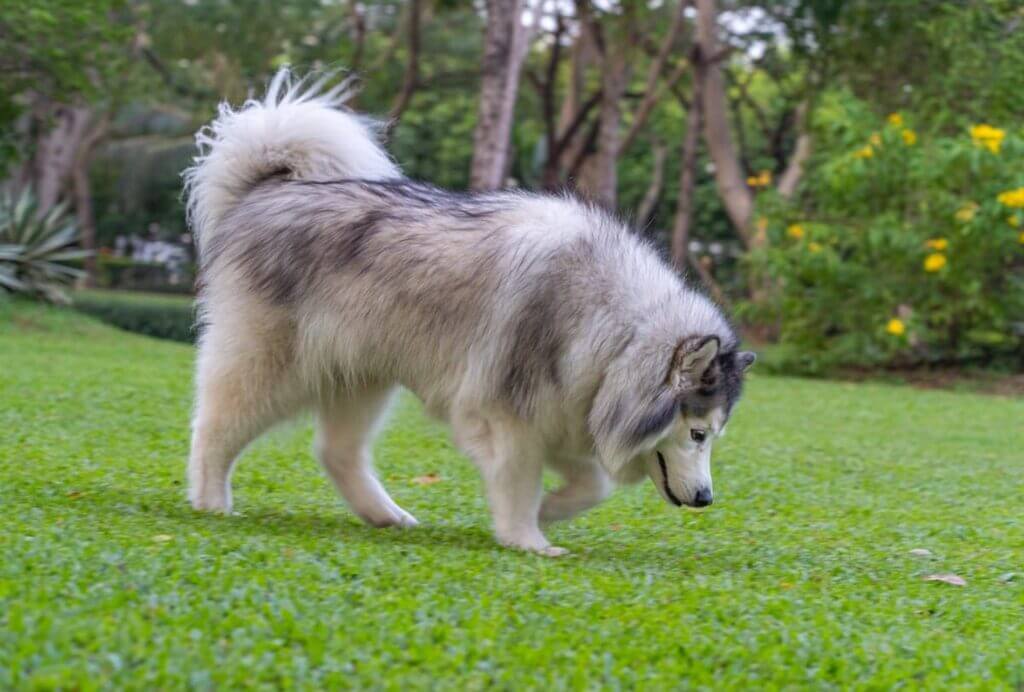 The giant Alaskan malamutes have a thick double coat that is usually black, brown or grey with markings of characteristic white on their face, crown, and snout. Their tails are thick and fluffy. These dogs have rich amber-brown eyes, unlike their smaller counterparts, that are husky with their blue eyes.

They also show coat colors like Red, seal, and sable. They have a broad chest that aids with the pulling. They are muscular dog and their tail lacks curl. Their coat can grow up to 2 inches and they are adapted to live in cold places only.

The outer coat is coarse and protects whereas the soft undercoat helps them stay warm. Being a double coat breed, they undergo seasonal shedding and shed comparatively more than most dogs, throughout the year. 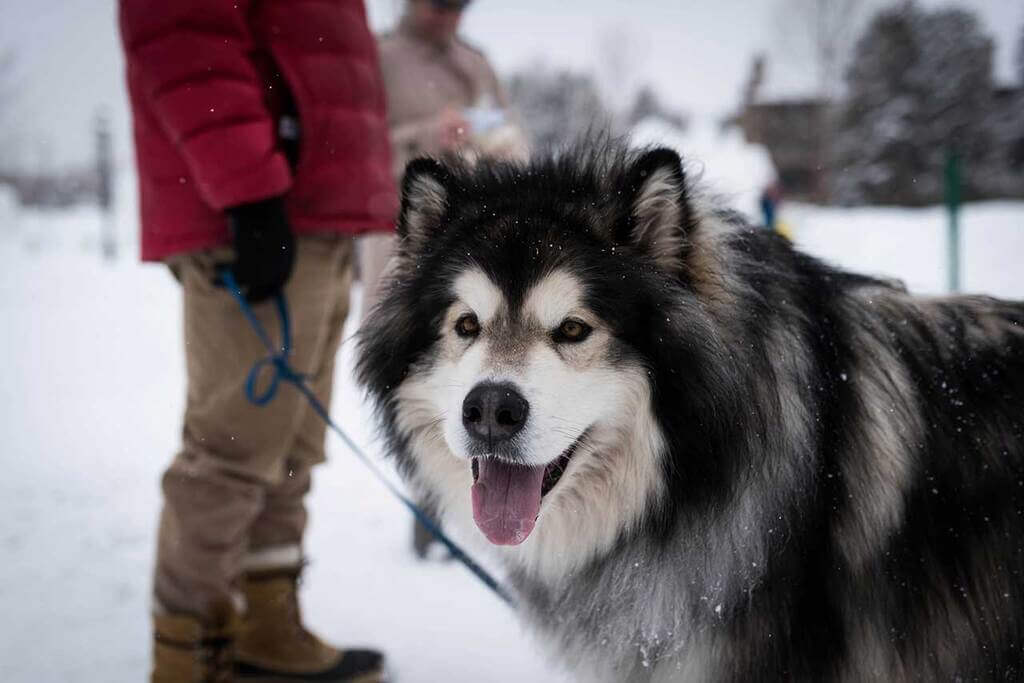 No matter how intimidating their height may look, these are very affectionate and loyal dogs. They are known to be territorial and protective when it comes to guarding their family and resources.

They exhibit food aggression if not trained well, early on. This trait was an important part of their ancestors’ survival. Thus, they are not suitable around small children who may not understand and respect their boundaries.

Their large size also makes them unsuitable around small kids, as the dog, unaware of their large size may knock kids down. They are also better suitable as the only pets in the house due to their guarding and territorial nature.

Their hunting background makes them inclined to chase smaller animals like cats. They are also known to fight other malamutes to claim their pack leader status as alpha. They may even tend to show this behavior with other dogs, hence they are better off as the only pets.

The giant Alaskan malamutes are suitable for active families as these intelligent pooches tend to easily get bored without mental and physical stimulation. They love playing with their humans and going on adventures. They thrive with love and attention from their humans.

Alaskan malamute giant dogs love to be active and will run around, jump, dig and play whenever they get the opportunity. They are intelligent and can be easily trained. 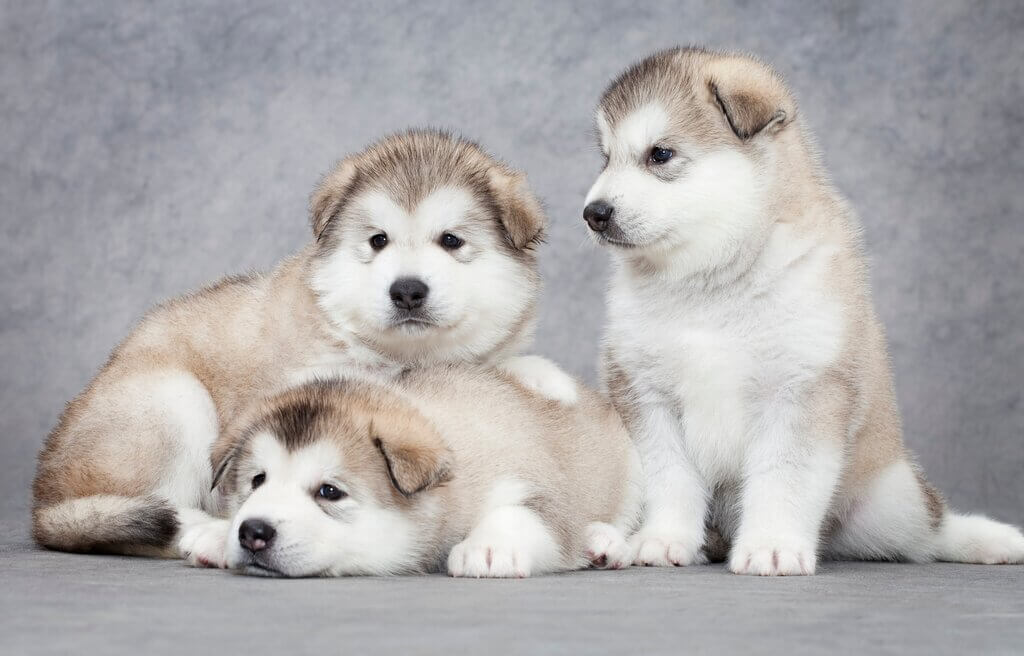 The giant alaskan malamute puppies make people fall head over heels for them due to their adorable and fluffy appearance and sweet nature. Reputable breeders of these pups are difficult to find as there aren’t many people who breed the giant variety of these dogs.

When choosing an Alaskan malamute puppy, make sure to observe their temperament and choose the one that will gel the best with your family. Make sure the puppy is healthy by looking at various features like the eyes, which should be bright, there should be no discharge from any of the orifices, their gait should be normal. 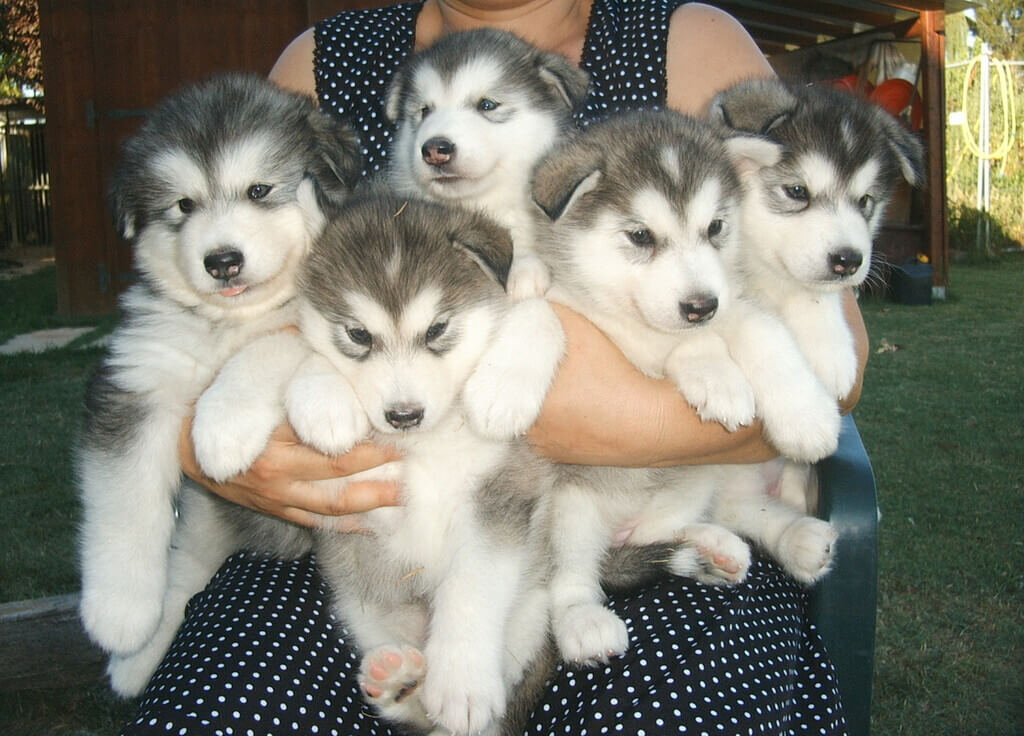 The giant Alaskan malamute price ranges from 1500$ to 3000$ depending on the breed quality, location, reputation of the breeding, pedigree, and various other breeding standards.

Each litter of a giant malamute contains eight to ten puppies and they should strictly be with their mother for at least eight weeks before being sold as these initial weeks contribute majorly to their growth, immunization, and behavior. 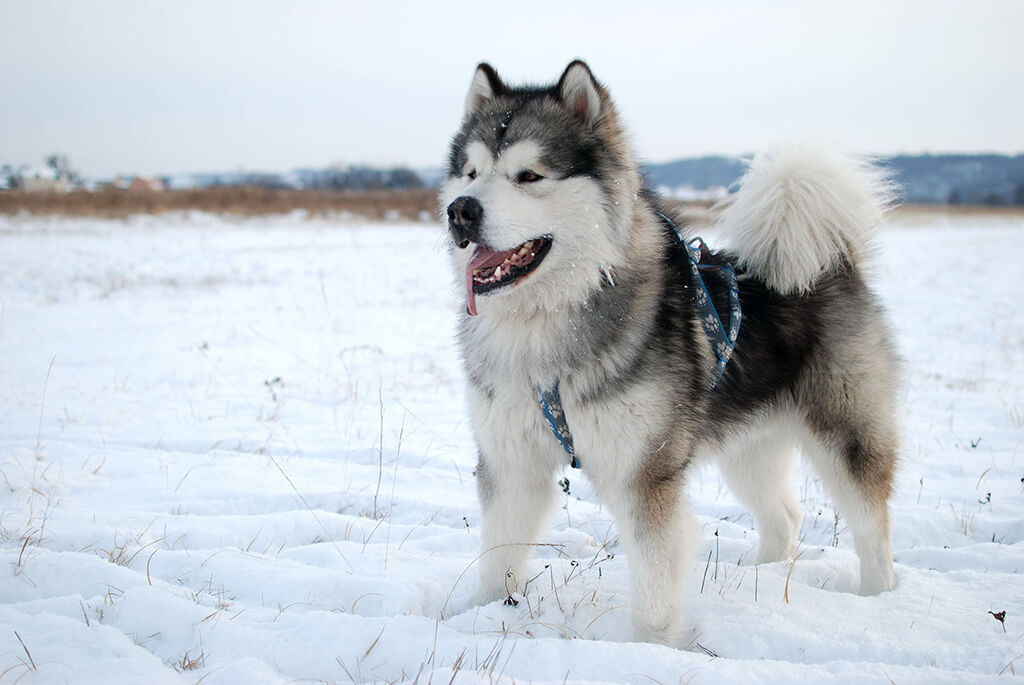 The Alaskan malamute giant requires a lot of food based on its size. When fed commercial kibbles, they may need up to 5 or 6 cups of dry food in a day. Give them smaller meals multiple times instead of one to avoid bloat.

If you are planning on giving them a home-cooked meal, consult your veterinarian to help you formulate a round and balanced diet for your pooch.

They also need at least two hours of vigorous exercise a day to keep them happy, healthy as well as physically and mentally stimulated. They love playing in the snow during winters. Letting them pull a sledge is a great way to tap their instincts and they love to do it.

Make sure you tie the harness properly to avoid injuries. Do not raise them in a warm climate as it is deleterious for their health. It makes them prone to dehydration, heat strokes, and other issues.

Grooming is an important part of raising a giant malamute as they are a double-coated breed. Combining them daily is advised while bathing is rarely needed. Brushing helps free their hair of mats and tangles and helps improve circulation. Raking the undercoat is beneficial during the two shedding seasons.

Other important aspects of grooming are brushing their teeth regularly, cleaning their ears and trimming their nails.

Certain things can’t be overlooked when breeding the huge Alaskan malamute. The giant variety is not as well versed as the regular-sized one when it comes to performing the tasks these dogs are meant for.

Breeds are promoted based on health, temperament, and wellness irrespective of their size and the size of the Alaskan malamute predisposes them to certain health conditions.

Other than this, they are perfectly loving dogs with similar characteristics as the Alaskan malamute that is the regular-sized. If you can fulfill their space requirements and other needs, go for it and get this gentle giant home.