Jack Russell and Chihuahua mix is also known as Jack Chi is a designer breed of dog bred with an aim to bring together the best qualities of purebred Jack Russell Terrier and Chihuahua. Chiweenie Jack Russell Chihuahua mix is a friendly, playful, and active dog and if you decide to get one home, we recommend you please look if any of them are up for adoption in your locality before you consider buying them. Jack Chi mix is a low-maintenance dog that does not have the yappy tendency of a purebred chihuahua. They can easily adapt to the apartment lifestyle and are quiet dogs that love human companionship.

History and Origin of Jack Chi 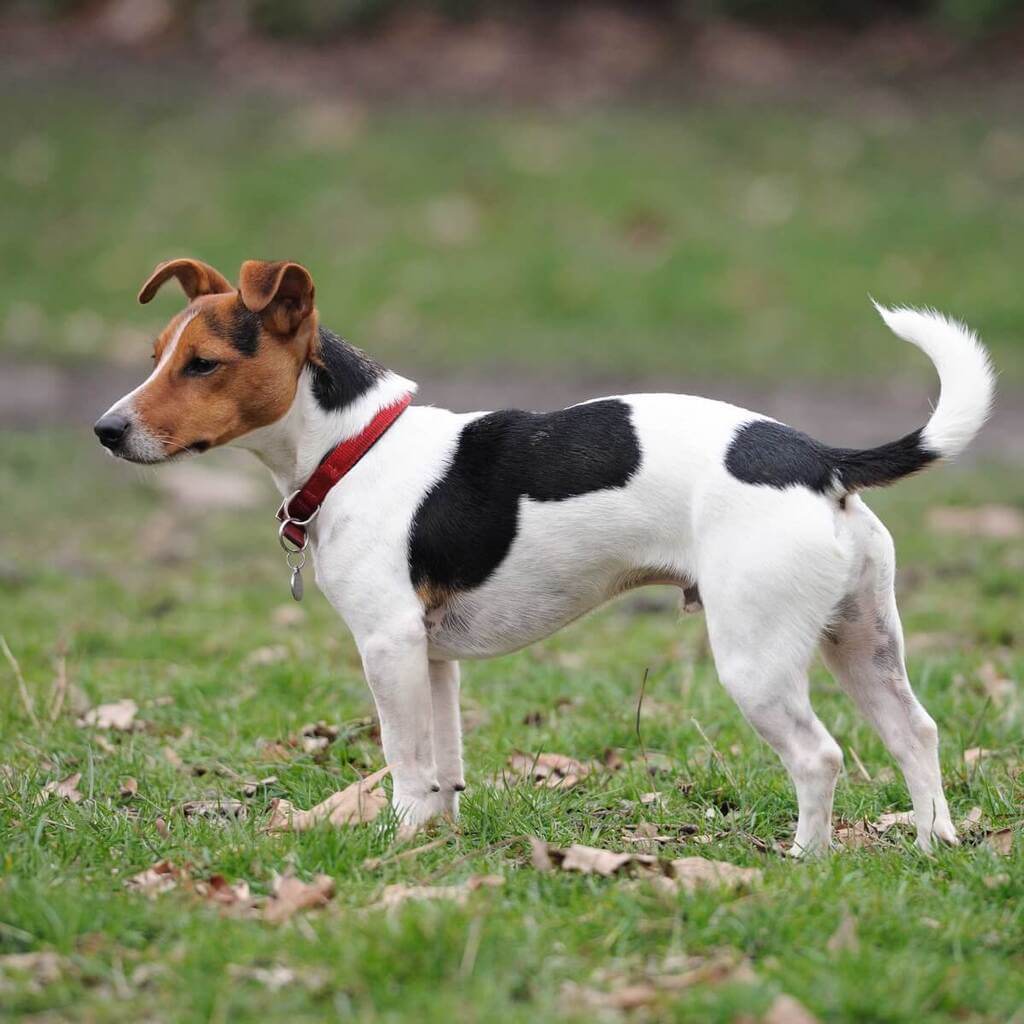 Being fox terriers, the Jack Russells were popular among horse riders and sportsmen. They were originally bred in the 1800s in Southern England and used as hunting dogs. They were introduced in the US as late as the 1930s and became popular as family and companion dogs.

These terriers have a small, compact body with strong limbs that give them the advantage of hunting foxes by maneuvering themselves through small spaces. They stood 14 inches tall and weighed around 15 lbs. Jack Russells were known for having a smart, independent, and friendly demeanor. 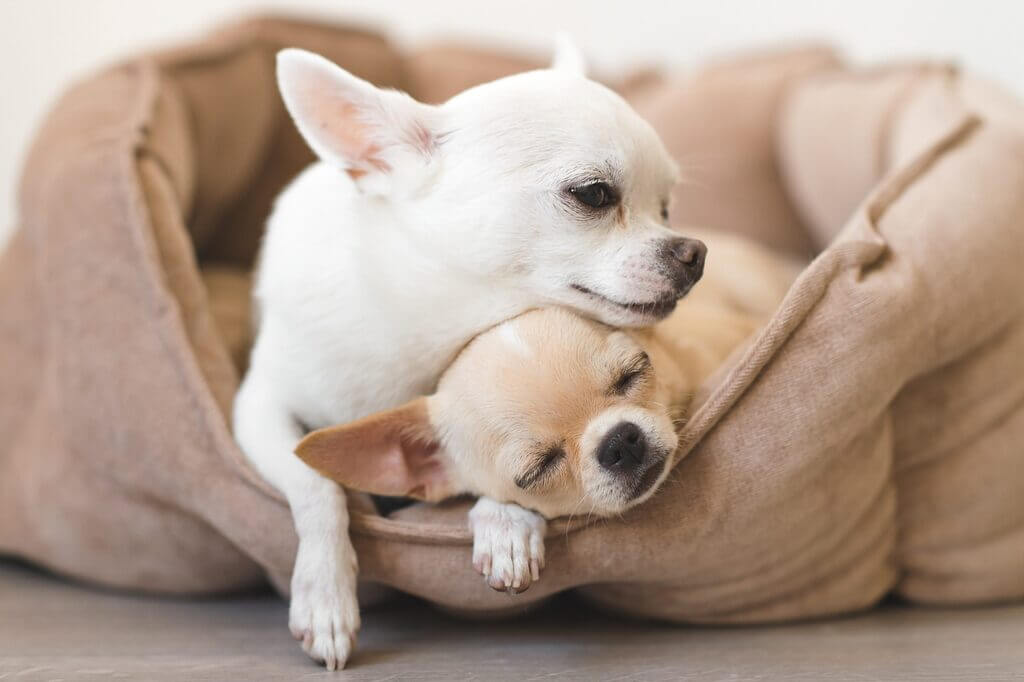 The origin of Chihuahuas goes far back than even the Jack Russell terrier as ancient Mexican artifacts have been found from the 9th century, depicting this small breed of dogs. They were bred for Ostentation and were brought to the US from their home state of Mexico by visitors and travelers.

The Chihuahua is a toy breed of dog weighing around 6 pounds with a height of 6 to 7 inches. They have a company body paired with a sassy and charming personality.

Although the origin of Jack Chi’s purebred parents is pretty clear, the story behind the creation of this designer breed is a little blurred. They are known to have existed since the 1980s when the crossbreeding of toy breeds became a popular and common thing.

Appearance of the Jack Chi Dog 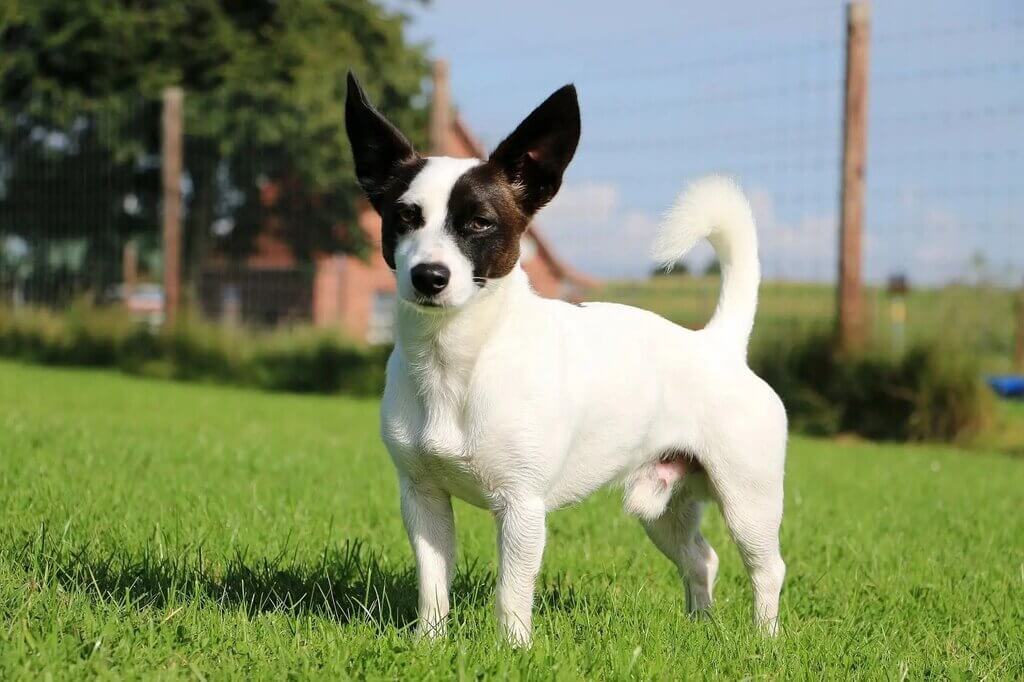 The Jack Russell Terrier and chihuahua mix can inherit their looks from either of their parents in varying quantities and every dog will have their unique features. However, some of the traits remain constant among Jack Chis.

A Chiweenie Jack Russell Chihuahua mix has a short and dense coat in colors like black, white, brown, tan, or chocolate. They can even exhibit a bi or tri-color coat. Their body is muscular, longer than tall with powerful tiny legs and a short neck.

Jack chi has large round eyes like that of a Chihuahua. Their snout is long and their ears large. Ears can either be erect and pointy or folded and floppy. They usually have a curled tail but some exceptions are possible.

The Jack Russell cross Chihuahua is usually small, sometimes medium in size with a height of 10 to 15 inches, weighing between 8 to 18 pounds. Males are slightly bigger than females.

Jack Russell Terrier Chihuahua mix is a friendly, fun-loving, and energetic dog who loves human companionship. They are small but active dogs, who are always up for a play session with their humans.

The Jack Chi puppies are smart and intelligent dogs combined with outdoorsy personalities and spunk. It is necessary to begin training and socialization early on with these pups so that they don’t take up wrong habits and start leading their own way.

Socialization helps these dogs to get along better with children, other dogs, or even strangers visiting the house. Even when socialized, we recommend keeping them away from cats or smaller animals as they have a prey drive and hunting tendencies that they inherit from the Jack Russell side of their parentage.

Jack Russell Terrier and Chihuahua mix require exercise as well as mental stimulation to stay happy and content. Lack of stimulation may lead the dogs to boredom, making them yappy and destructive.

Jack chi mix are social dogs who love to interact with their human, thus, leaving them alone for long hours can cause separation anxiety in the dog leading to barking, chewing on objects, and destroying things around them.

They sometimes exhibit stubbornness in their nature which may act as an obstacle in their training. But you’ll get there eventually using positive reinforcements and motivation techniques. 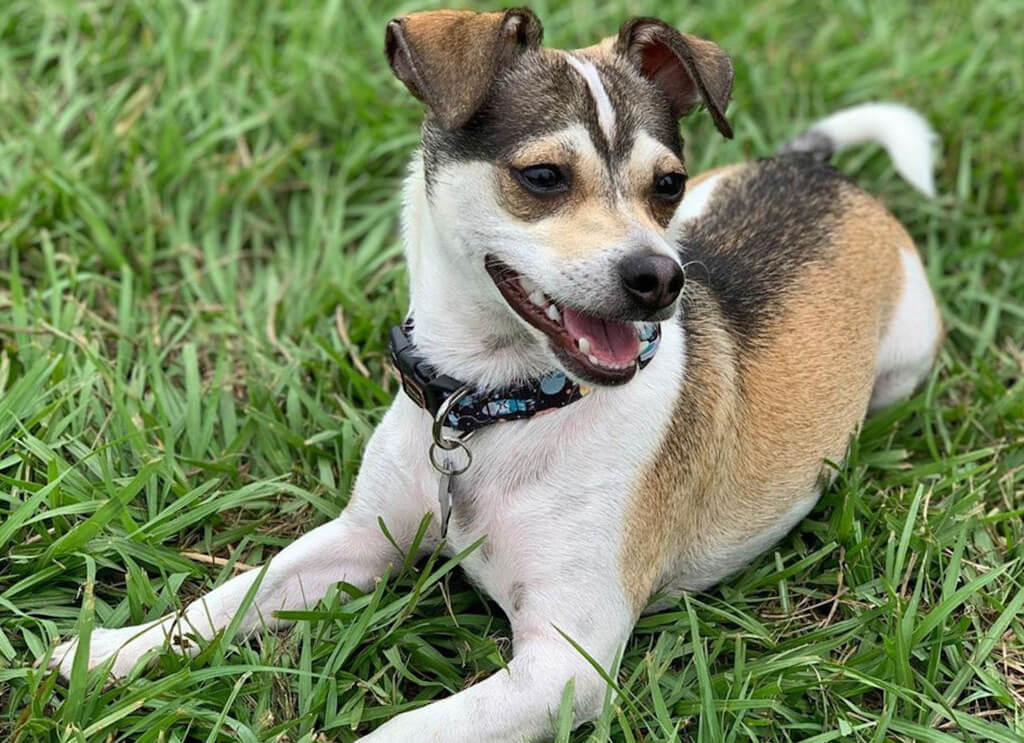 They are born with a short coat and thus require minimal grooming. Brushing them once or twice a week will be more than enough to keep the circulation good to their skin and to remove dust, debris, and loose hairs.

You can bathe them once a month or when they roll in mud or start smelling unpleasant. Use a dog-friendly shampoo by diluting it in the water and applying it against the direction of their hair.

Other than caring for their coat, brushing them daily or providing them with dental chews to maintain oral hygiene is extremely important. Oral health is often neglected in dogs which leads to periodontal and gum disease that can develop into serious illness.

Clean your Jack Chi’s ear weekly using an ear cleansing solution and make sure to get their nails trimmed regularly.

Make sure not to overfeed your Jack Russell Terrier Chihuahua mix as they tend to gobble up everything offered to them. Refer to the quantity mentioned on the pack of their food and feed them accordingly.

If you decide to prepare a home-cooked meal for your Jack Chi, ask your vet to formulate a well-balanced diet according to the weight and growth stage of your puppy. 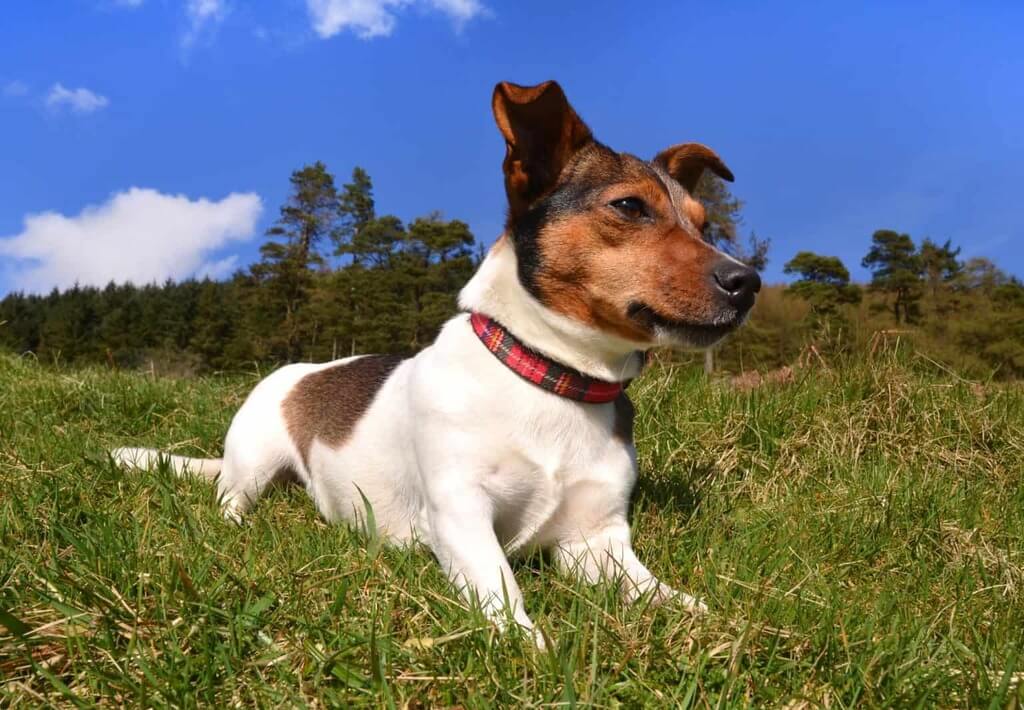 Daily exercise is a vital part of having a Chiweenie Jack Russell Chihuahua mix to give the right outlet to their pent-up energy. Walking them twice a day and allowing them to explore new places and smells keeps them mentally and physically stimulated.

Training these pups can be challenging as they tend to be stubborn and bossy at times. They learn fast when they want to as they are smart-natured dogs. Training early is a must and there’s nothing positive reinforcement training cannot fix.

A Jack Russel chihuahua mix price ranges from 200$ to 750$ depending on breed quality, the reputation of the breeder, locality, etc.

Some of the jack chi puppies cost as high as 15000$ making this breed one of the most expensive dog breeds. Make sure you buy from an ethical and reputed breeder to avoid associated genetic health issues.

Ask the breeder to show you the parents of the pup to get an idea of what your puppy will grow into and also gain an insight into the breeding condition. 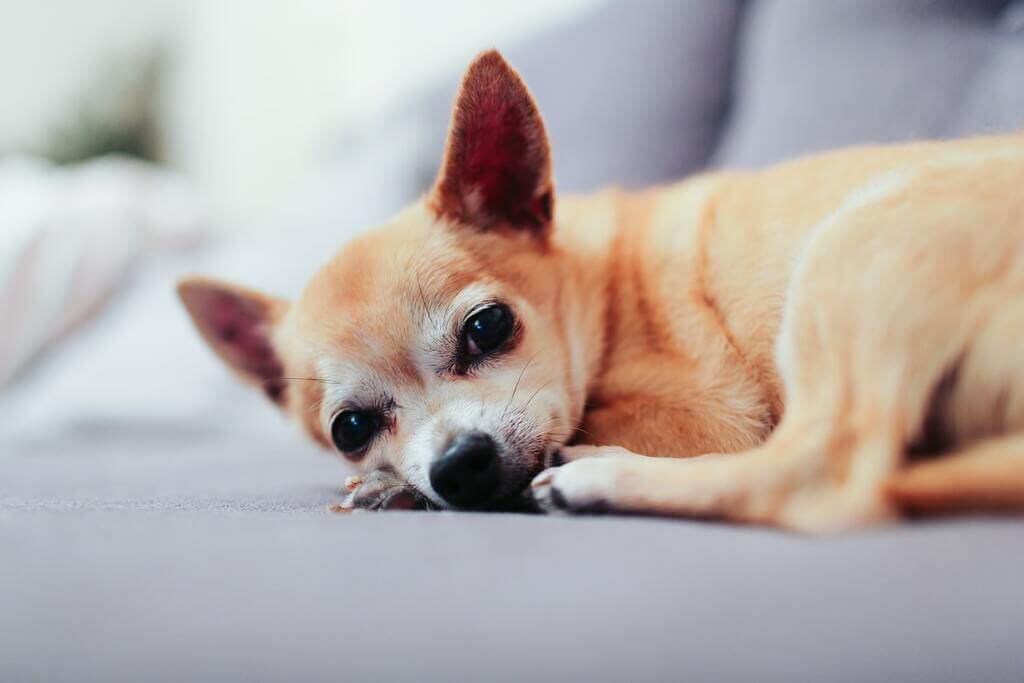 A Jack Russell terrier chihuahua mix can have 4 to 8 jack chi puppies at a time. They are small and adorable little nuggets who are fun and feisty. They will keep you entertained all the time and make sure you don’t feel low at any given time when they are around.

Jack Chi puppies can be of a single color exhibiting hues of various colors like brown, Golden, Cream, Chocolate, Fawn, or Black.

Jack Chis are generally a healthy breed of dog’s but every breed has a genetic disposition to some health issues. Some common issues faced by this breed are as follows:

Jack Russell Chihuahua mix is an energetic and outgoing dog but their desire to be your lap dog is no less. These pups have amazing personalities and will light up your house with joy. They are low-maintenance dogs that only require a high dose of love and affection.

If there’s always someone to give them company and interact with them at your house; these are the perfect dogs for you. They are suitable for active houses or houses with older children that know and respect a dog’s boundaries. We hope all this information helps you decide if they are the right fit for your family.